Available now, the Affinity 1.10.3 update for macOS is ready to release the potential of Apple’s new generation of MacBook Pros, allowing Affinity users to enjoy unheralded speed and power. 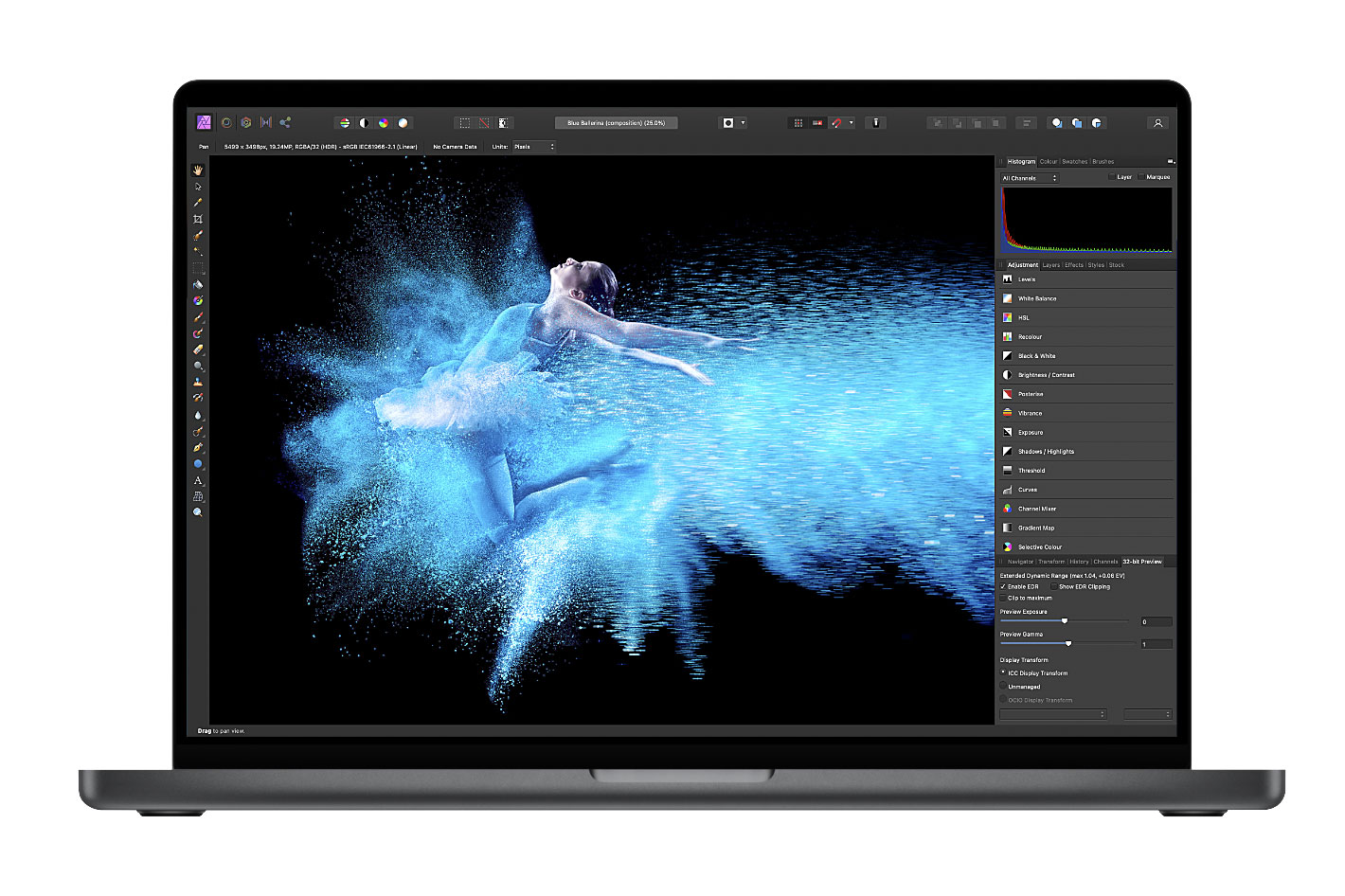 Affinity announced that its “suite of apps”, Affinity Photo, Designer and Publisher are optimized to deliver a seamless upgrade experience for Apple users installing the new macOS Monterey. The company also said that buyers of the latest MacBook Pro with M1 Pro and M1 Max chips will enjoy stunning speed improvements when using all three apps with the Affinity 1.10.3 update.

Ashley Hewson, Managing Director of Affinity developer Serif, says the new machines represent a ‘perfect fit’ for the Affinity apps, adding: “Once again we’re proud that our Affinity suite is at the leading edge of apps ready to go with full optimisation for the new macOS and chips.

“The new GPU represents an industry inflection point—we now have compute performance surpassing nearly all discrete GPU hardware, but retain the key benefits of unified memory. This required us to step back and think again about where performance bottlenecks might be, as it’s clear the ‘old rules’ no longer apply.

“The results of this work yield a benchmark score of around 30,000 for the M1 Max 32-core GPU, absolutely obliterating any other single GPU score we have ever measured. Our changes have also improved performance on the previous M1 chip, which is now roughly 10% faster in our benchmark in version 1.10.3.”

Apple says it recorded up to 5.6x faster combined vector and raster GPU performance in Affinity Photo with the 16-core M1 Pro, and up to 8.5x faster with the 32-core M1 Max.

“The new M1 Pro and M1 Max chips further validate the vision we had more than 10 years ago, that the future of GPU compute would be performance rivalling the highest-end discrete hardware, coupled with toll-free unified memory,” says Hewson. 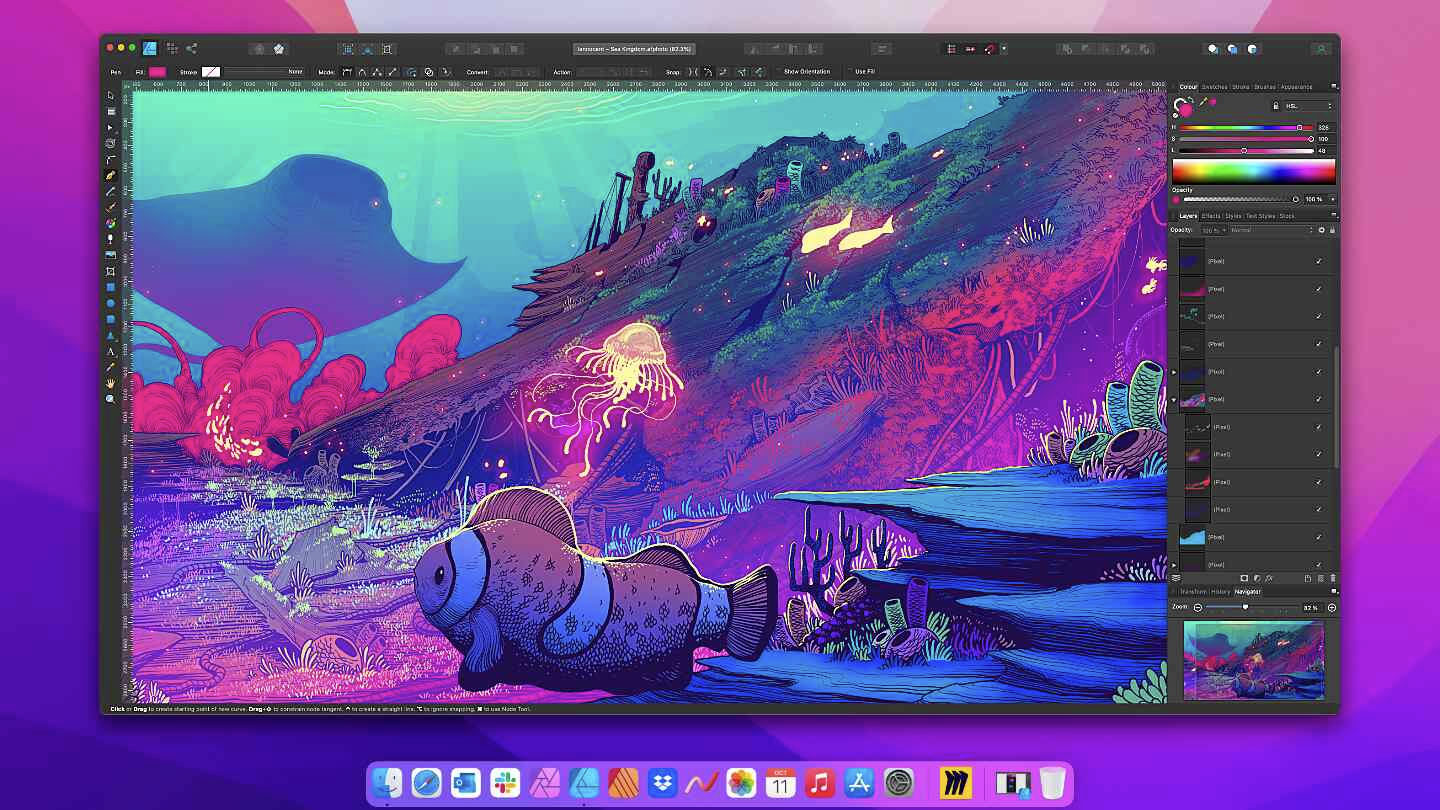 The new MacBook Pro features an expansive Liquid Retina XDR display, which completely changes the way photographers can edit images in Affinity Photo. “The new XDR display is also a game-changer for photographers – says Hewson, adding, “we spent most of our time trying to work around the fact that our cameras shoot a few stops more light than can be displayed properly on a standard screen. Displays like the new Liquid Retina XDR can easily display the entire dynamic range captured by dSLRs, so the way you develop RAW changes completely, not just for bracketed merge shots, but for single images. Gone are the days of compressing highlights to recover detail—fundamentally changing the way we use computers to process photographs.”

“Affinity apps are also optimized to deliver incredibly smooth rendering at 120fps on the new MacBooks—an area where our iPad app innovation has again put us in an advanced position.

“We are delighted with the new technology Apple has brought forward in these new devices and thrilled with results of our performance work on 1.10.3. We very much look forward to seeing what our customers create with them.”

Existing users of Affinity apps on macOS can download Affinity 1.10.3, primed for new macOS and MacBook Pros, for free now.

Affinity developer Serif released version 1.9 of its apps, a major free update that offers a series of features,...

There is bit for everybody in this selection of Black Friday deals: photo, video, audio and even DTP apps,... 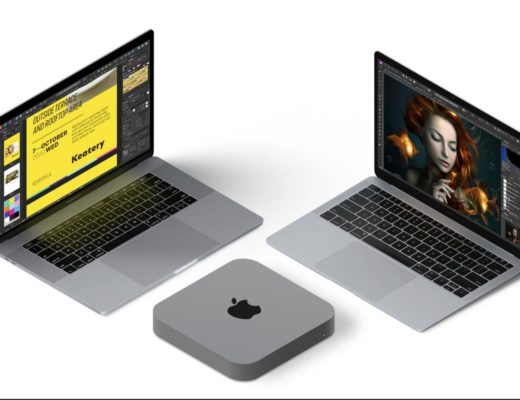 Serif revealed that its Affinity creative apps are ready to go on Apple’s new macOS Big Sur and primed...