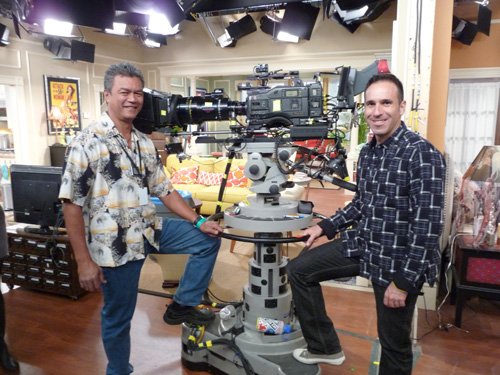 When cinematographer Wayne Kennan, ASC and his crew geared up for the new CBS series Accidentally on Purpose, they were thrilled to see that a key part of the camera package was Vinten heads.

“Operator Ray Liu is a 20-plus year veteran of every kind of multi-camera shoot, from Soaps like Santa Barbara to talk shows, awards shows, sports and game shows,” says Kennan. “Vinten pan and tilt heads and pedestals have always been his preferred choice.” That’s why he specifically requested Vinten for Accidentally on Purpose.

Liu believes that Vinten is the best pedestal for sitcoms. “It’s heavy enough to give me a very firm foundation for any quick pans and tilts that I may have to perform, but it’s light enough for me to make very quick and accurate repositions in a second,” Liu explains. “Vinten also allows me the ability to adjust my drags on a neutral camera head and yet has a firm foundation. In my opinion, the only equipment that can do that is Vinten.”

“Camera operator Ron Hirschman was right in sync with Ray when we started putting the show’s package together,” adds Kennan. “When talking about equipment needed for a particular show, he will often tell a story about how he became a firm Vinten fan.”

“A dolly-based camera operator learning to operate a pedestal camera can have some difficulty adapting,” says Hirschman. “My first experience on a ped was great. But, when the show ended I went on to a new sitcom, using some old equipment owned by the studio. The heads weren’t made for our big F900s and long lenses. There were dead spots and little control, not to mention lots of nervous vibrations transmitted from my body to the shot. I was wrestling with the camera at every move and held my breath when I settled so as not to shake the lens. It worked half the time. Then, one week, I was almost fired.

“It also happened to be the week the production finally gave us Vinten 750 heads. Ironically, the same day we got the new heads, the editor called me in. He was fuming because I wasn’t settling soon after landing on an actor. I took a breath and told him to check the dailies on the shots with the new heads and get back to me.

“Switching to the Vinten 750 was like night and day and following the actors while moving on an old stage floor was like slicing through butter. I finally had the control I so desperately needed on a demanding show. The next day the editor walked onto the set and gave me a big thumbs up.

“Vinten heads gave me the confidence to call myself a pedestal operator who can give my directors and DPs the perfect shots they need, when they need them.”

“Ray and Ron take pride in their work,” says Kennan. “Thanks to Vinten equipment, they are able to transition smoothly and effortlessly. Their ability to sell a shot is as much a credit to the Vinten heads and pedestals as it is to their ability to work the cameras to get often challenging and always interesting shots like we constantly have on Accidentally on Purpose.”