Learn how I made the X-Particles moose skull animation.

X-Particles Moose Skull
How I made the X-Particles moose skull animation. 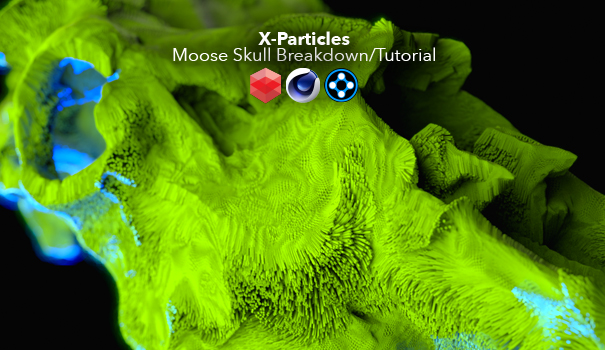 X-Particles advection is a simple task, yet can yield some incredible visuals. Today I wanted to share with you my process for creating a Moose Skull animation that was posted on my Instagram.

Here is the original animation if you have not seen it yet.

The music in this piece for those interested was from Eveningland Music. The track is called Lost Time. Playing with X-Particles can be fun and therapeutic. I managed to knock this animation out fairly quickly in roughly half a day. This would be including the sim and render time as well which was the bulk of the time.

The base premise behind making particles move like this is fully explained in an official Insydium tutorial titled Surface Advection. Bob Walmsley explains step by step how to recreate the effect in Mario Tran Phuc’s. project. It’s an excellent video and I highly recommend it. Bob does a great job at explaining the details.

For my own build I had done some minor changes, mostly with what renderer I was using, and some minor adjustments to the particle source geometry being used. Hopefully my video can offer you another perspective on tacking the same core effect.