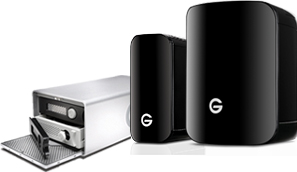 It may seem obvious, as it’s in the name, but having removable drives gives you the ability to very easily swap a drive out in the unlikely event of a drive failure. Further, the drive modules used in the G-RAID® with removable drives are the same as those used in the G-RAID® Studio with Thunderbolt™ and the GSPEED ® Studio with Thunderbolt™, so someone using a combination of these products, as long as they are all populated with drives of the same capacity, only needs to purchase one drive module if they want to keep a spare on hand.

The G-RAID® with removable drives is faster.

We’ve upgraded the chipset in the new G-RAID® with removable drives to enable faster performance. While the Gen4 and Gen5 versions of the GRAID ® maxed out at transfer speeds of up to 250MB/sec, the 4TB and 8TB capacities of the G-RAID® with removable drives are 20% faster, with transfer speeds of up to 300MB/sec in RAID 0 (striping). The 12TB capacity is even faster, with performance in RAID 0 (striping) of up to 330MB/sec.