The fourth episode in the series Space Explorers: ISS Experience will take viewers for a spacewalk outside the International Space Station side by side with two real astronauts, thanks to VR. 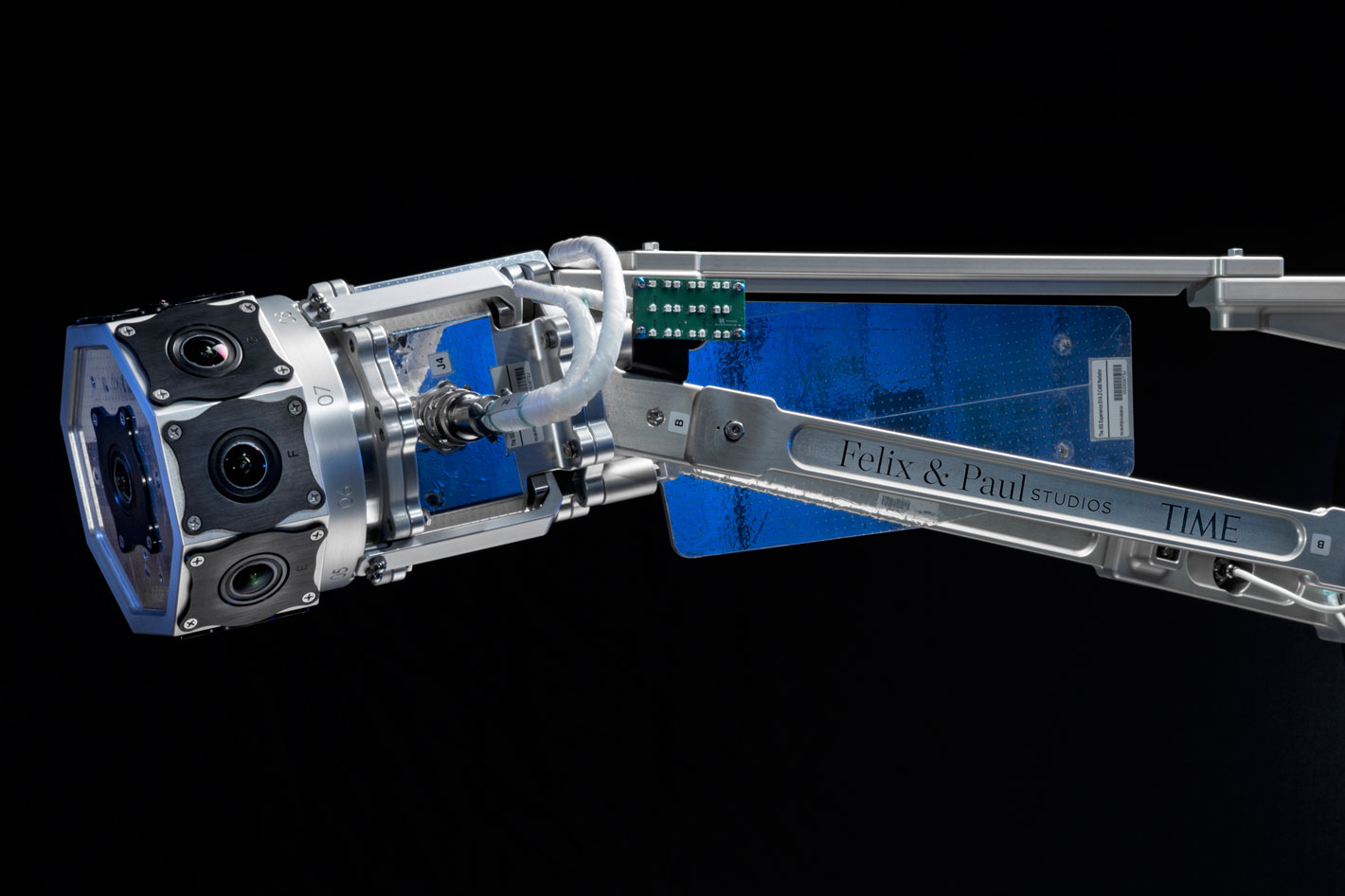 The first-ever spacewalk filmed in cinematic virtual reality will arrive during the Winter 2021, from Felix & Paul Studios. Get your Virtual Reality headset and be prepared to jump in!

The idea for the Space Explorers: the ISS Experience project, which ProVideo Coalition mentioned before, came about after Felix & Paul Studios worked on episodes of a virtual reality series called Space Explorers that showed astronauts training on Earth. The team wanted to tell the story of science and life aboard the orbiting laboratory. The project serves as an outreach project as well a technology demonstration, testing the limits of filming in the harsh environment of space, while documenting life in space.

“The natural next step was to actually take the viewer to space,” says Felix and Paul Studios co-founder and creative director Félix Lajeunesse. “We wanted to bring the viewer to the International Space Station to be alongside astronauts to experience the reality and challenges of life in microgravity and be part of the journey of learning to live and do science in space.”

The studio had experience creating virtual reality films, but their typical camera was the size and shape of a four-foot-tall tree. That was not going to work in the tight confines of the space station, so Felix & Paul Studios looked elsewhere for a solution. The collaboration with camera company Z-Cam to made it possible to develop a new virtual reality camera system much smaller in size. 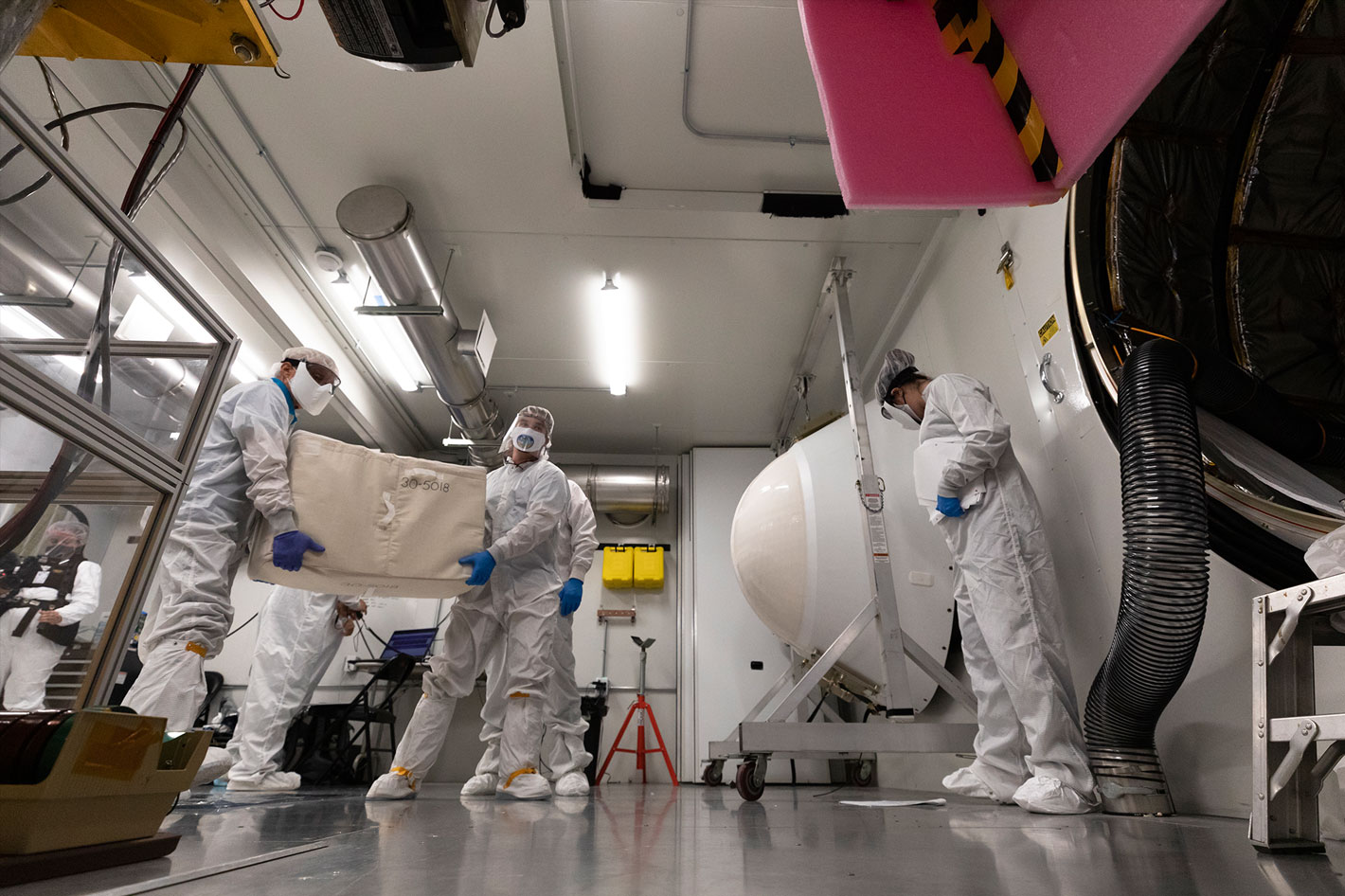 Partnering with the ISS National Lab and Time, a team from Felix & Paul Studios prepared everything to launch a high quality 360-degree camera to space to help tell the story of science and life aboard the orbiting laboratory. The resulting device launched on the 16th SpaceX commercial resupply services mission in December 2018 along with a number of other scientific experiments. Since then, the team has recorded many moments, including a jam session among the astronauts, crew meals and the arrival of new astronauts.

“The science is ultimately the most important thing we are doing on the space station,” says Dylan Mathis, NASA’s communications manager for the International Space Station Program. “We are conducting science every day and it is science we can’t do anywhere else. VR allows us to show people that in a different way.”

The astronauts are the main subjects of the film, but since they are the sole residents of the space station, they are also the videographers behind the camera. That meant learning the basics of filming for virtual reality. By the time each astronaut nears the end of their mission, most have become experts at setting up and using the camera, sometimes choosing to film moments on their own. 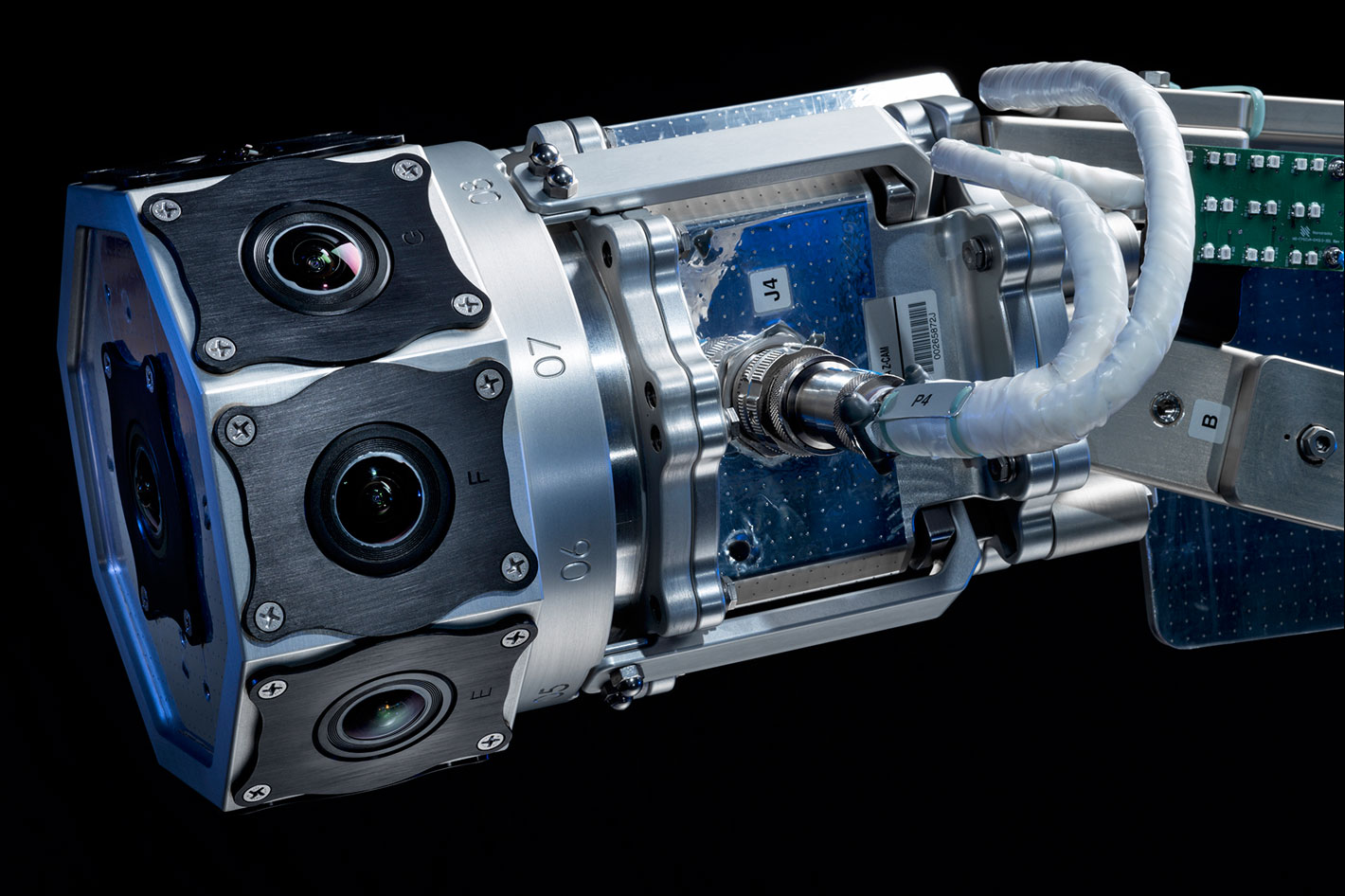 So far, the footage coming back seems to be achieving the goal of immersing audiences in life aboard the space station. NASA astronaut Sunita Williams, who lived on the space station during Expedition 14/15 and Expedition 32/33, got the chance to watch some of the initial footage. “It was like I was back there in and on the International Space Station,” says Williams. “You forget you have [a VR headset] on your head, and you just keep looking around. It gives a huge appreciation to all that is inside the space station and how people live and work.”

Although the Z-Cam camera used inside the ISS has worked, the biggest technical challenge, capturing a spacewalk in virtual reality, required an entirely new camera, which was developed by Felix & Paul Studios alongside their partner, Nanoracks. The customized 3D, 360-degree, Space Camera was delivered on October 2020 to the International Space Station via the NG-14 Cygnus spacecraft, the S.S. Kalpana Chawla.

“An immersive series titled ‘The ISS Experience’ would not be complete without taking viewers along for the ultimate ride: a spacewalk outside the International Space Station side by side with two real astronauts,” said Félix Lajeunesse, co-founder of Felix & Paul Studios and Emmy-winning creative director of the Space Explorers series. “Our Space Camera, purpose-built to capture this historic event in fully-immersive 3D, brings us one step closer to our goal of taking billions of minds to space, and having them experience a spacewalk as if they were astronauts themselves.” 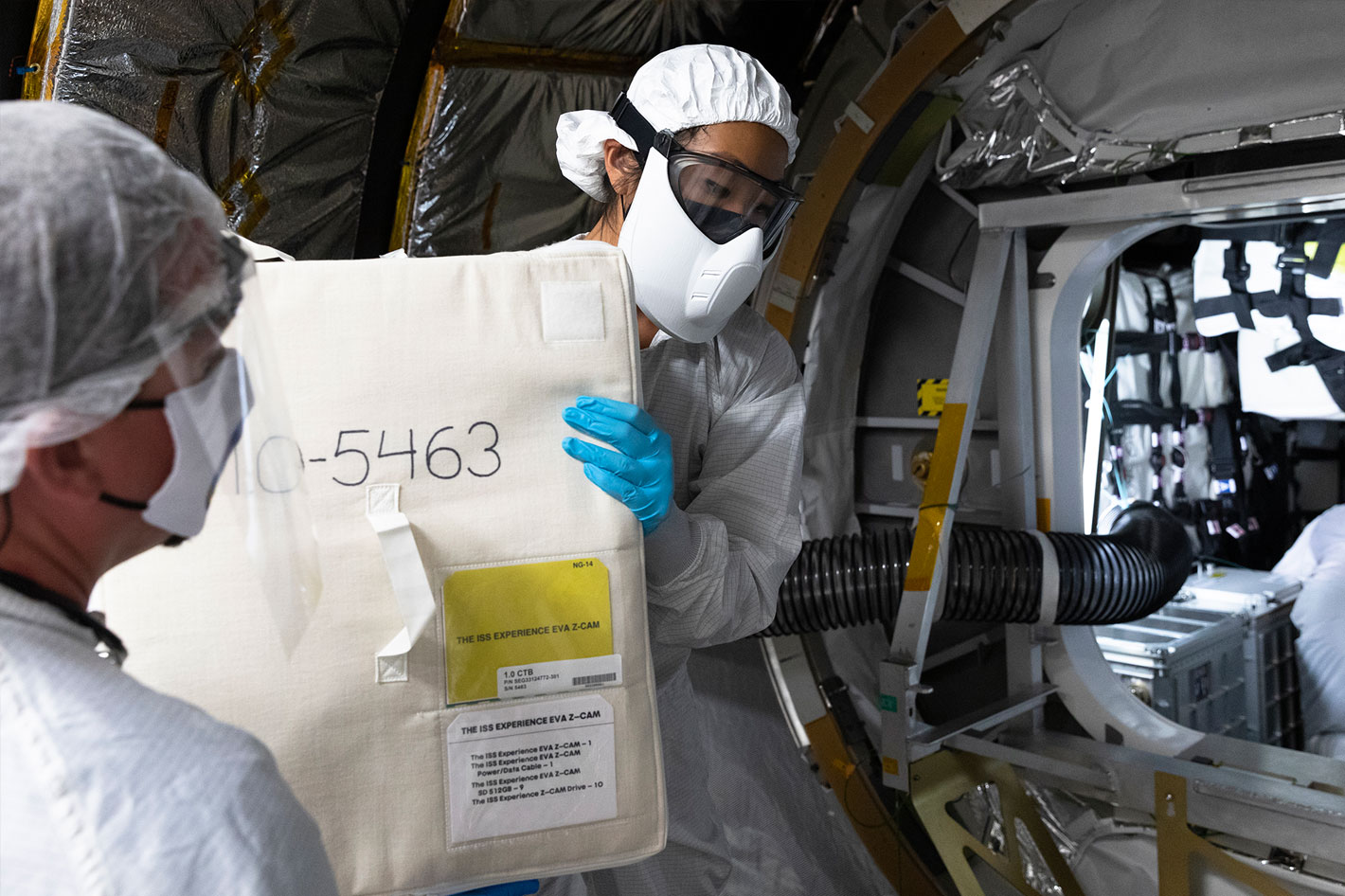 The Space Camera can store approximately 15 hours of 3D, 360-degree footage with custom lenses made to withstand extreme light and heat to minimize flare when directly exposed to the Sun. The International Space Station travels at 17,100 miles per hour with 16 sunrises and sunsets per day and external temperatures ranging from -250° F to +250° F.

“Getting this camera to space was the culmination of five years of exceedingly hard work. Only 228 humans have ever conducted a spacewalk. It is one of the most thrilling yet perilous tasks an astronaut can undertake,” said Jonathan Woods, Executive Producer for The ISS Experience at TIME Studios and Emmy-winning producer of A Year in Space. “When I first reached out to pitch this idea to NASA in 2016, my goal was to spare viewers on Earth the perilous part while allowing them to enjoy the thrill by filming the first-ever spacewalk in Virtual Reality. Thanks to the efforts of hundreds of people around the world, working in collaboration with the brilliant Felix & Paul Studios, NASA, Nanoracks and the ISS National Lab, the VR experience that results will have made all of the work very much worth it.” 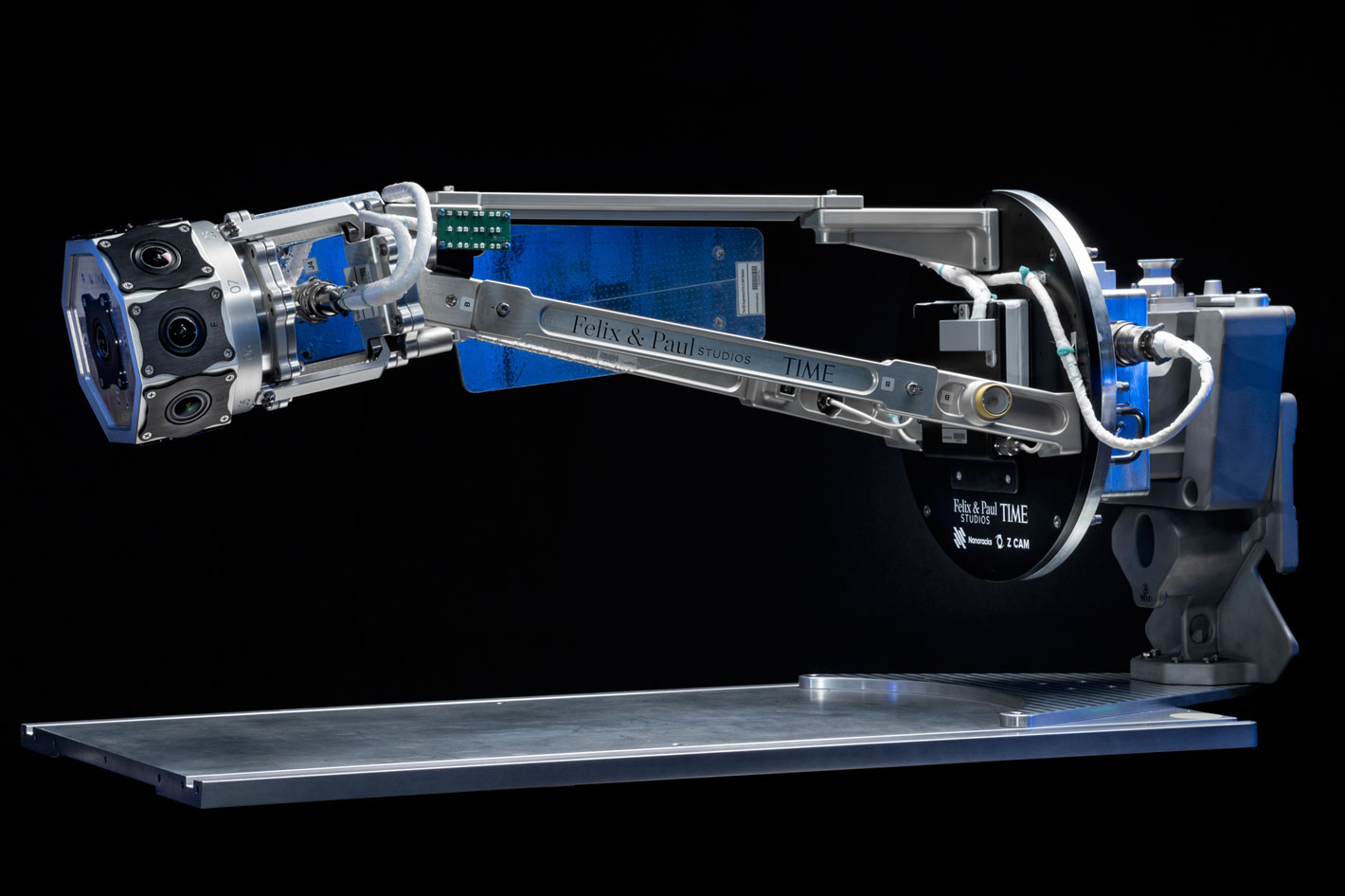 A camera built to last in space

Nanoracks’ expertise in EVA satellite deployment systems enabled them to design a hermetically sealed, radiation resistant aluminum shield enclosure for the Space Camera, built to last up to a minimum of 7 days in the environment of space.  An active heating system as well as a passive cooling system were also integrated into the enclosure to manage the internal camera system’s temperature fluctuations.

“This may well be one of the most complex and exciting projects that we have ever worked on at Nanoracks,” says Conor Brown, Senior Manager of Nanoracks Program Office. “We’re seeing creative commercial utilization of the ISS in full force – leveraging our platform built for deploying satellites and converting it into a VR camera mount that can be robotically manipulated to follow along with a spacewalk like never before. We are beyond excited to play such a pivotal role in bringing perhaps the most adventurous and extreme activity a human being can ever do to viewers all over the world.”

To capture the spacewalk featured in Episode 4 of The ISS Experience, the Space Camera is mounted and powered via the Nanoracks’ Kaber MicroSatellite Deployer and maneuvered around the outside of the International Space Station by Canadarm2, the Canadian robotic arm on the ISS. For this project Canadarm2 functions essentially like a crane on a movie set, enabling the Space Camera to capture the spacewalk in fully immersive virtual reality, bringing viewers alongside the astronauts as if they were part of the crew.