Is Sony’s Android division finally correcting the sub-US$5k framerate deception in menus, or is it worsening it?

My long time readers know that exact 30 fps hasn’t been a television standard since before 1953. That was the year that the United States added color to the prior greyscale (“black and white”) television system and simultaneously changed the framerate to ≈29.97 (and the field rate to ≈59.94). They also know that for years I have been encouraging camera manufacturers to display these non-integer framerates to at least two decimals in camera menus to avoid havoc among novice users. Fortunately, Canon & Panasonic (to a lesser degree) have fulfilled my requests in recent cameras, while JVC & Sony have stubbornly maintained their irresponsible practice of rounding framerates in menus, in Sony’s case in cameras under ≈US$5000. So what’s up with the Sony Xperia 1 II Android phone which seems to offer 23.98, 29.97 and 59.94 in Sony Cinema Pro, an app which “competes” with FiLMiC Pro even though it’s not available as a standalone product? This is all clarified ahead, together with requests for camera manufacturers and software developers.

Refresher about VFR versus CFR 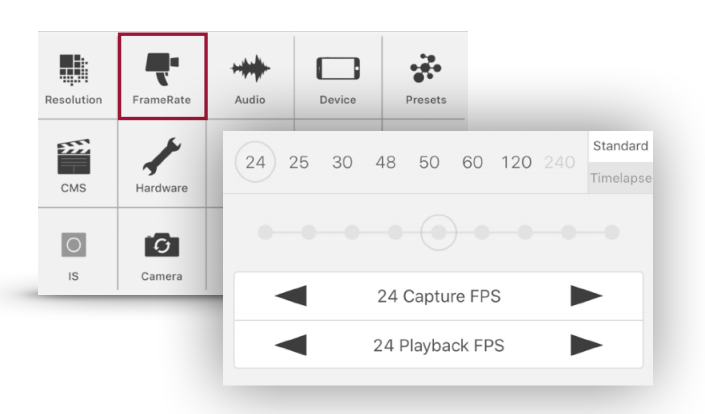 When we set a framerate in an app like the renowned FiLMiC Pro, for example: 24, 25 or 30 (see screenshot above), they are actually just targets and we should interpret the menu to be saying ≈24, ≈25 or ≈30. The recording actually varies continually (based upon the complexity or simplicity of a scene) both above and below the target rate to save bandwidth. The recorded material is later conformed (adjusted) to a desired framerate at CFR after manually setting a project in a compatible editor before adding the first clip to the timeline. Some examples of those final desired distribution framerates include:

Some apps capable of this have us set the desired framerate via the user interface/UI (i.e. Adobe Premiere Pro CC and Apple Final Cut Pro) while creating a project manually, before dragging the first clip. With a capable app like iMovie for macOS but which no longer offers this setting in the UI, you can do it using a workaround as explained in this article. If you use a video editor that does not support VFR footage satisfactorily, you can always transcode to a CFR format first.

Sony’s Cinema Pro app is exclusive to the Xperia 1, Xperia 1 II and Xperia 5 smartphones from Sony. The Sony Cinema Pro app is not sold or available for official download for other Android devices. Although this app “competes” with the renowned FiLMiC Pro, Sony happens to be one of two Android smartphone manufacturers which officially work so far with FiLMiC Pro’s new clean HDMI output (covered here and here). The other manufacturer is Samsung. (I really hope Google and Motorola will be next.)

My wonderment ended abruptly when I asked Daniel Hernández Portugués (Lead Android Engineer / FiLMiC Inc.). I figured Daniel probably must have access to a Sony Android smartphone to test since FiLMiC had vetted Android devices from Sony and from Samsung for the new clean HDMI feature. Fortunately, Daniel does have access to one and determined that despite the framerates being listed as 23.98, 29.97 and 59.94 (which insinuate both numeric precision and CFR), in reality, Sony’s Cinema Pro app is actually recording VFR. Here is the report about the requested 23.98 file from Sony’s Cinema Pro: 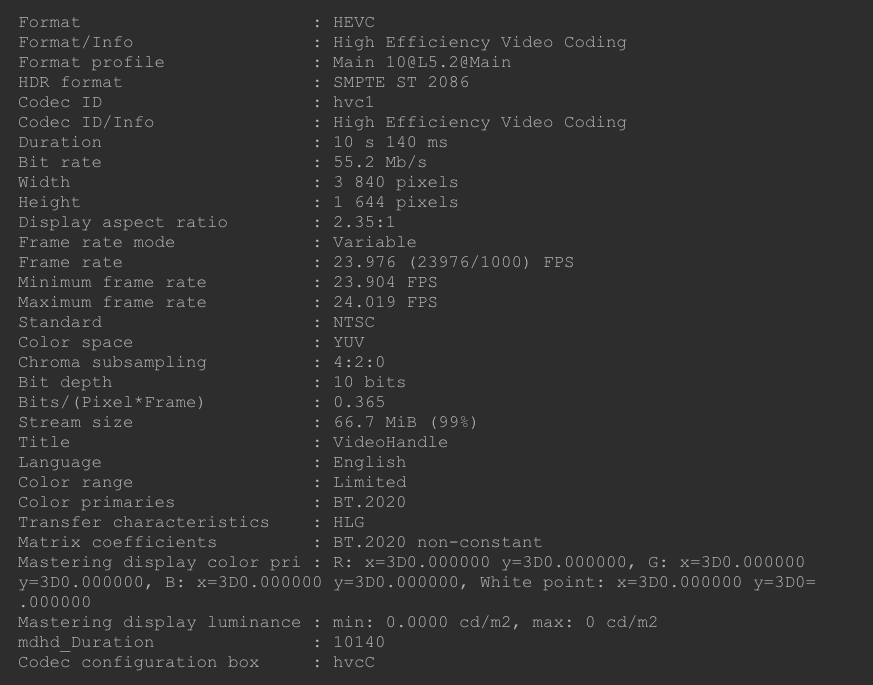 The above report was generated by the MediaInfo app, which I covered at the end of this recent article Review: Invisor media file inspector for macOS since the MediaInfo app offers similar features to the Invisor app although is multiplatform. (¡Muchas gracias Daniel!)

Conclusions and petition to developers/manufacturers

We now know that Sony’s Cinema Pro app in Sony’s Xperia 1 II smartphone is actually recording VFR (not CFR) and that when requesting 23.98 in the menu, it can actually record a minimum of 23.904 FPS and a maximum of 24.019 FPS (or more extreme numbers). What can we conclude from this is the following:

JVC, Sony and other camera manufacturers who are still deceiving users and editors in some of your models: Please release a free firmware update to correct all of your remaining cameras to display non-integer framerates in all camera menus to at least two decimals. Please display those non-integer framerates as:

to stop confusing novice users and editors and causing havoc. Please note that Canon has thankfully fixed this prior deception even in is consumer models as low as ≈US$550 like the M100. Panasonic has thankfully fixed it with cameras like the GH5, GH5S and higher models, but not with lower models so far to my knowledge.

Apple, Cinema FV–5, Ecamm Live, FiLMiC, MoviePro, Sony Cinema Pro and other software developers: Whenever you record or stream VFR, please list the framerates appropriately with the ≈ symbol to indicate an approximation:

As most have probably heard by now, the new iPhone 13 Pro offers the coveted ProRes códec. Since attending...