This is a Sony first; releasing a camera with a name, VENICE. It’s a Full-Frame digital motion picture camera system. Otherwise, think of VENICE as the next generation of Sony’s CineAlta camera system. The VENICE is designed to expand the filmmaker’s creative freedom through immersive, large-format, Full Frame capture of filmic imagery producing natural skin tones, elegant highlight handling, and wide dynamic range. VENICE was designed through close collaboration with the creative community, fulfilling the requirements for filmmakers and production professionals. 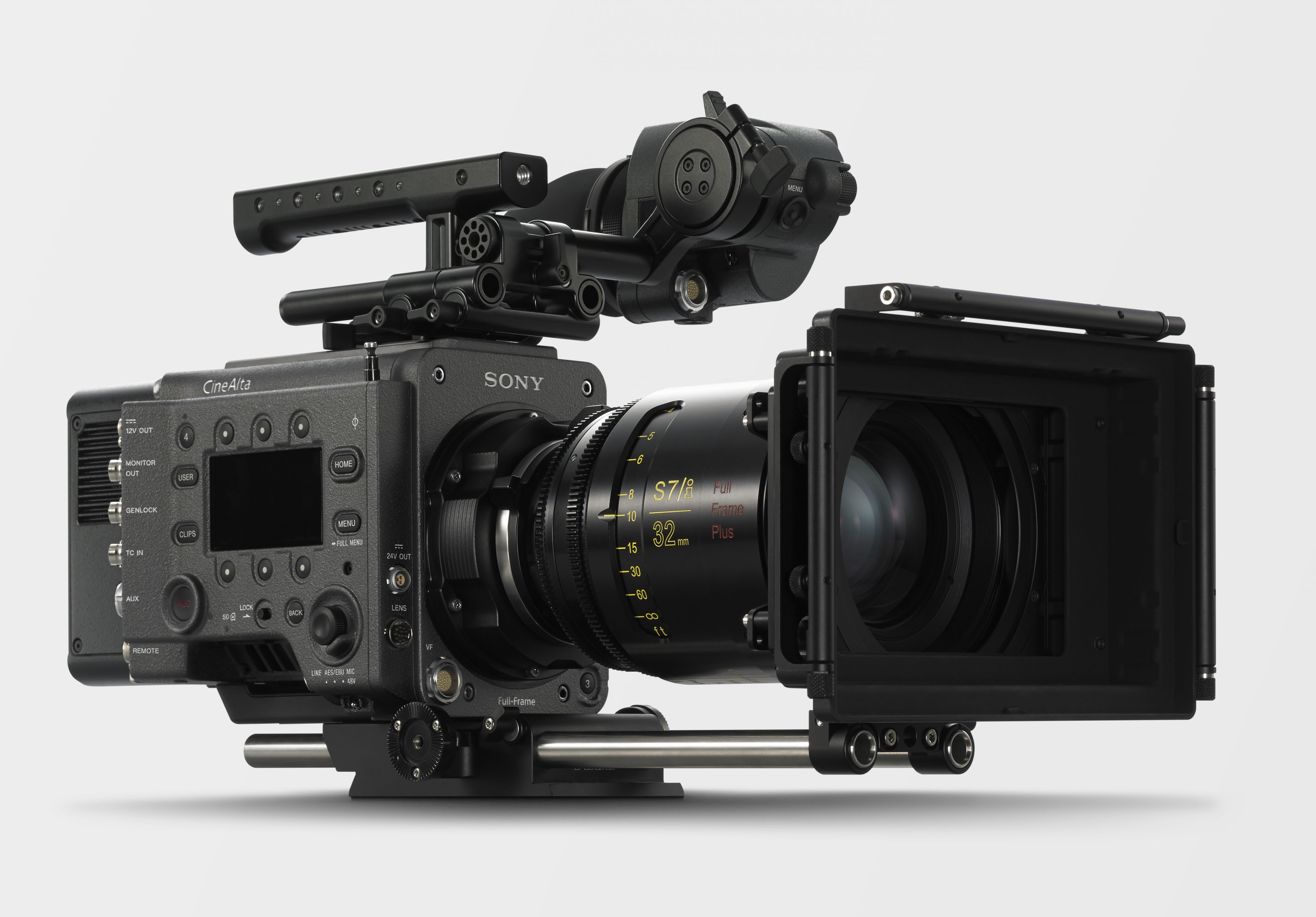 Officially, VENICE will be unveiled in front of a select audience of American Society of Cinematographers (ASC) members and other industry professional. Sony will treat the audience by screening footage produced in Anamorphic with the VENICE. The footage, or short film, was written and directed by Joseph Kosinski and shot by Academy Award winning cinematographer Claudio Miranda, ASC. I really want to see this film and I hope Sony will soon make it available for the rest of us who have not been “selected” to be in their audience.

If you have followed digital camera technology than you might have expected Sony to release a new flagship camera this year. The F65 was released a few years ago and it never really took off with Hollywood filmmakers. The F55 and the F5 are slowly becoming a little long in the tooth for digital cinema cameras.

“We really went back to the drawing board for this one,” said Peter Crithary, marketing manager, Sony Electronics. “It is our next-generation camera system, a ground-up development initiative encompassing a completely new image sensor. We carefully considered key aspects such as form factor, ergonomics, build quality, ease of use, a refined picture and painterly look—with a simple, established workflow. We worked in close collaboration with film industry professionals. We also considered the longer-term strategy by designing a user interchangeable sensor that is as quick and simple to swap as removing four screws, and can accommodate different shooting scenarios as the need arises.” 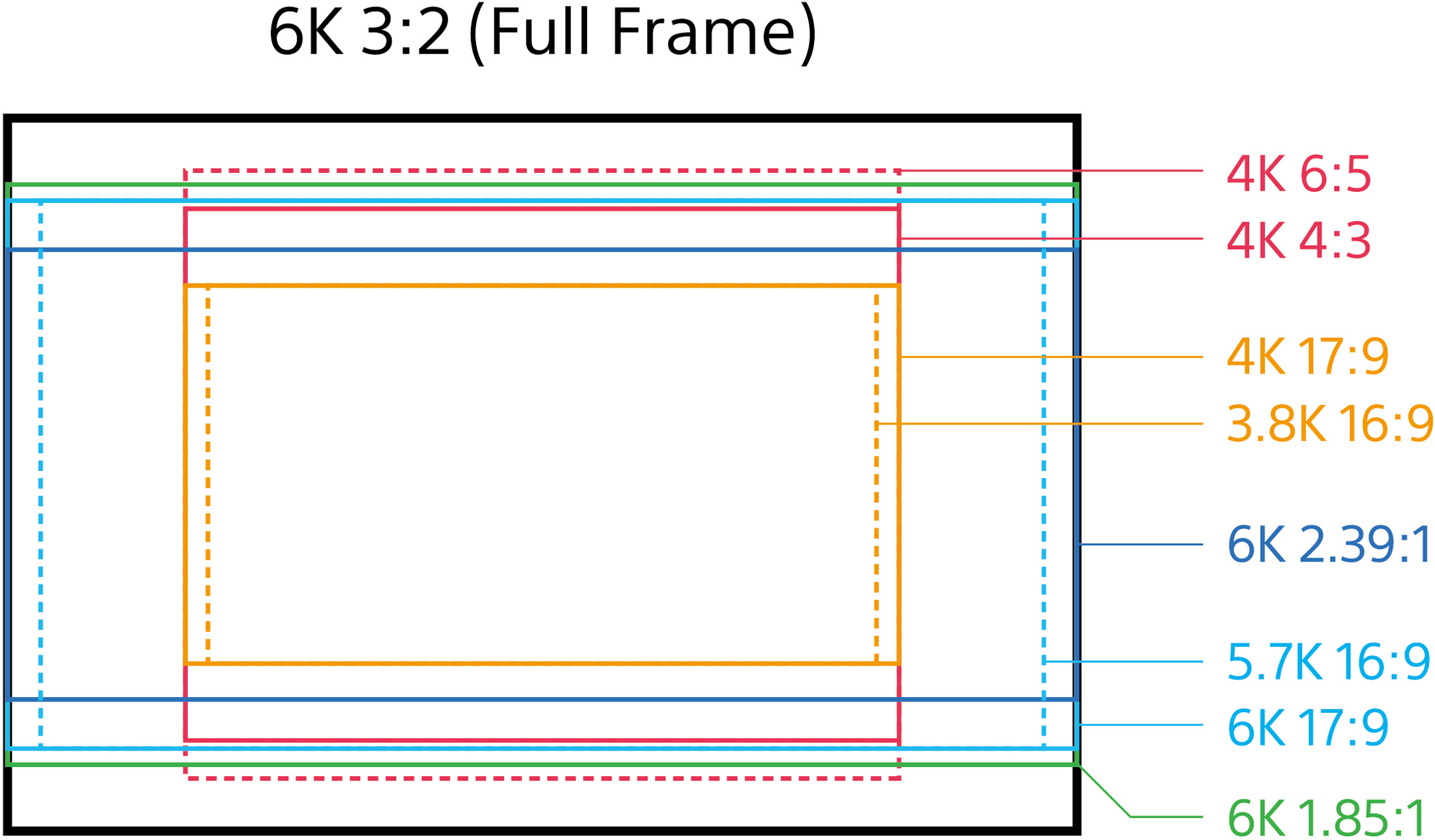 A new color management system with an ultra wide color gamut gives users more control and greater flexibility to work with images during grading and post-production. VENICE also has more than 15 stops of latitude to handle challenging lighting situations from low-light to harsh sunlight with a gentle roll-off handling of highlights. 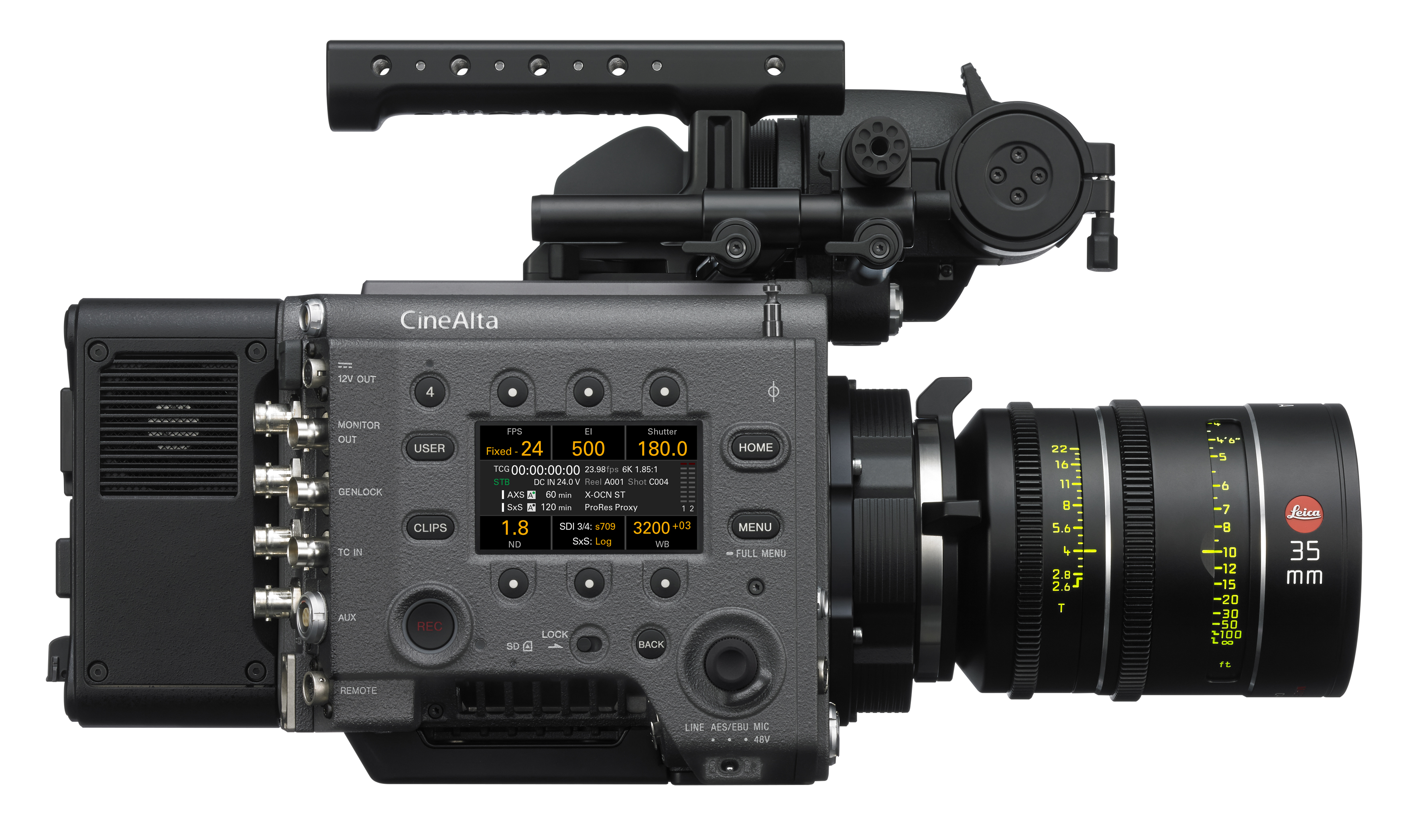 VENICE has a fully modular and intuitive design with refined functionality to support simple and efficient on-location operation. It is the film industry’s first camera with a built-in 8-stage glass ND filter system, making the shooting process efficient and streamlining camera setup.  The camera is designed for easy operation with an intuitive control panel placed on the Assistant and Operator sides of the camera. A 24 V power supply input/output and LEMO connector allow the use of many standard camera accessories, designed for use in harsh environments.

The VENICE has two servo-controlled, mechanized optical ND filter wheels to reduce exposure up to 8 stops. The neutral density goes from clear to ND 0.3 to ND2.4. The ND filter options are ND.3, ND.6, ND.9, ND1.2, ND1.5, ND1.8, ND2.1, ND2.4. Also, this 8 Step ND filter system will be able to be controlled wirelessly. If you’re lucky enough to have the VENICE on a crane, jib, or a drone you will be able to change the ND without having direct access to the camera. This is a pretty big plus for those edge of the day shoots where a DOP might be swapping out ND to keep up with the ever changing light. 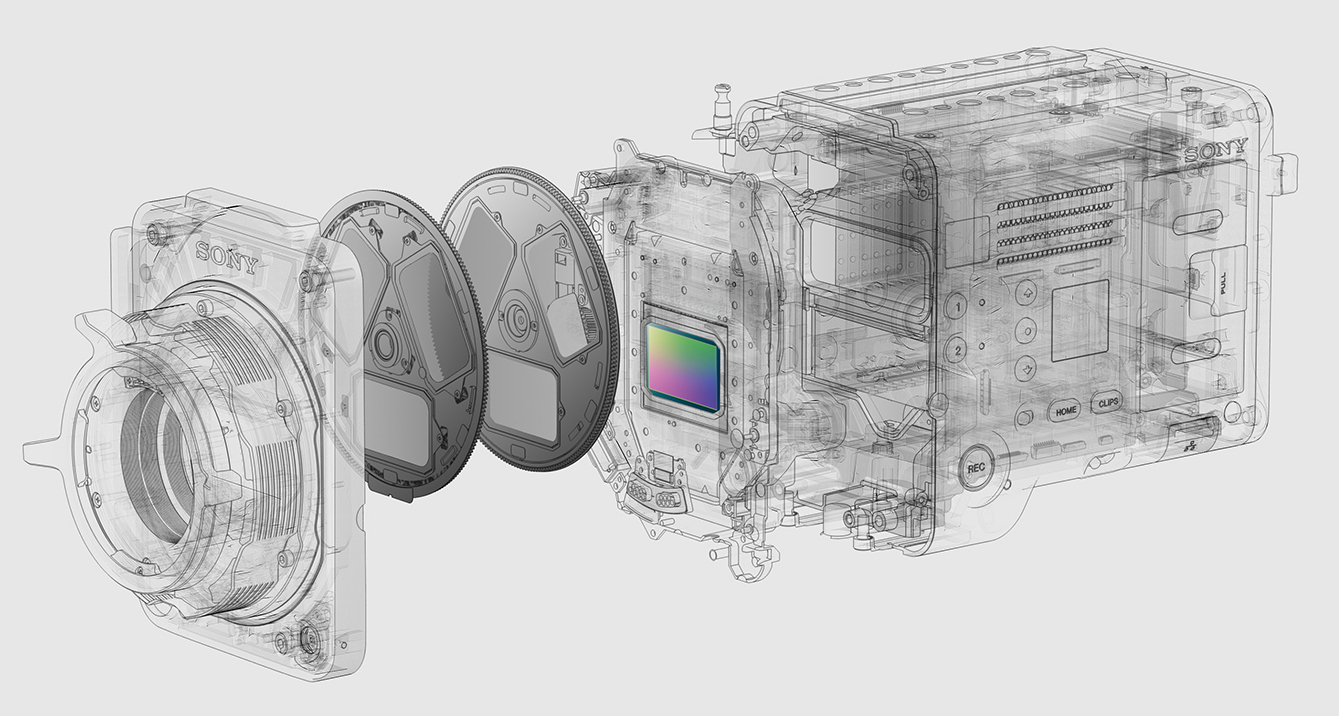 The VENICE can also record two video streams at once onto two different media formats. The AXS-R7 digital recorder can be set to record the Raw or X-OCN as XAVC or ProRes proxies are recorded onto internal SxS cards. In a future firmware update, the VENICE will record raw or X-OCN onto the AXS-R7 while the VENICE also records 4K XAVC internally as its proxy setting. What if a shooter does not have the AXS-R7 handy? Well, there is an option to record both XAVC 4K and ProRes 422 Proxy onto a SxS card at the same time.

The VENICE also has the option to replace the Sensor Block when new and improved Sony sensors become available. While this technology in digital cinema cameras is not new it is new to a Sony Camera. Sony also takes the idea a little bit further.  The VENICE Sensor Block is a user-changeable Sensor Block that can be changed out in the field without a need of a clean room. Cinematographers can forget about sending their camera back to the manufacturer for costly upgrades. The key to the field changeable sensor is because Sony has made the whole front of the camera removable. Only four hex screws hold the Sensor Block and its necessary components onto the camera body. 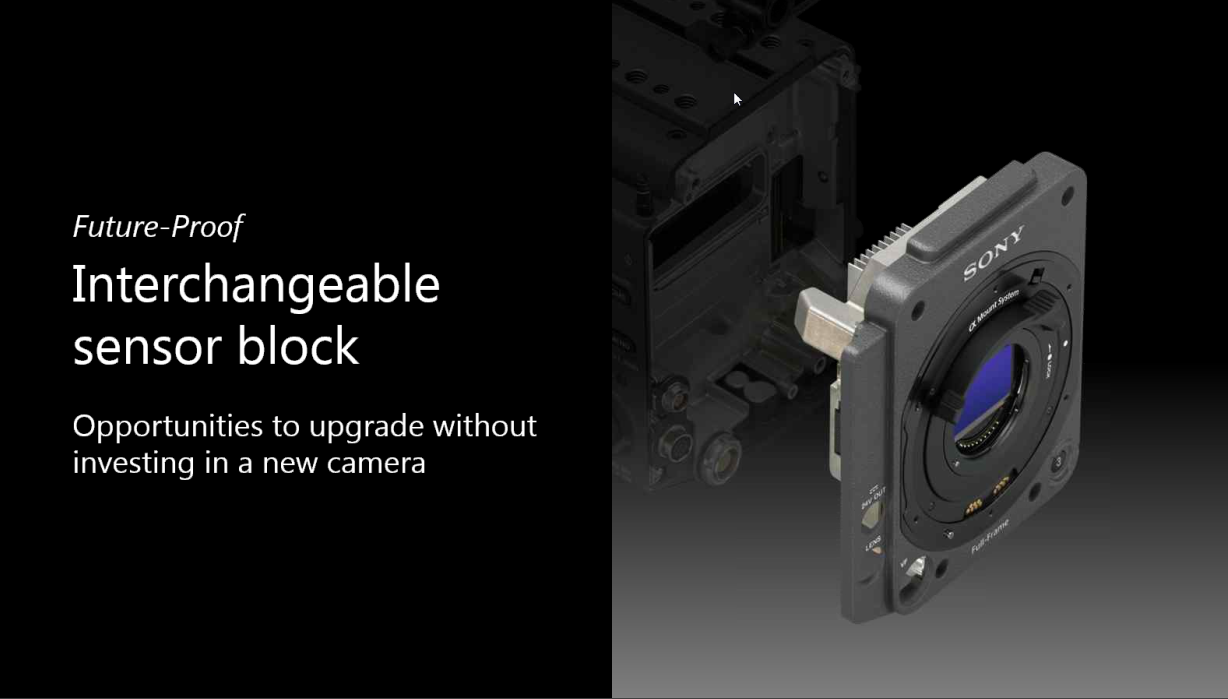 With VENICE, Sony is giving users the option to customize their camera by enabling the features needed, matched to their individual production requirements.  Optional licenses will be available in permanent, monthly and weekly durations to expand the camera’s capabilities with new features including 4K anamorphic and Full Frame, each sold separately. The VENICE CineAlta digital motion picture camera system is scheduled to be available in February 2018.

At the time of the announcement, the VENICE has two lens mount options: a PL option and a locking E-Mount option. Interestingly enough, the PL mount sits on top of the locking E-Mount meaning just about any mount, or adapter can sit on top of the locking E-Mount. This means the VENICE works with existing PL Lenses, will accept Panavision mounts and will likely accept almost any mount that comes in Super35, Full-frame, or large formats. The PL mount is attached directly to the existing E-Mount by six screws on the front. How does this all work? The flange depth for an E-mount is a measly 18mm whereas the flange depth for a PL mount is 58mm. The PL mount comes with industry-standard lens metadata contacts for Cooke/i at 12 o’clock.

Since this is just an unveiling many still have questions about the VENICE. Questions like… how much will the VENICE cost? What is the camera’s base ISO? How high can a cinematographer push the ISO and still capture a relatively clean image? How much does the camera weigh? I do not have concrete answers to these questions, but I can point to a few hints. The VENICE is being called “compact” and “intuitive.” That makes me think it’s larger than an Alexa Mini but smaller than an Amira. In the BTS picture below you can get a good sense to the camera’s size. It’s not small, but it’s not big either. What does the image look like out of the camera? From what I have found the image is supposed to be an improvement over the F65 with less red in the shadows and a more painterly look.

Well, this feature is not being talked about or shared yet by Sony because they are still figuring it out. This might be a classic case of engineering and cinematographers disagreeing on what is the actual Base ISO of the VENICE. In the two behind the scenes photos shared by Sony we cannot make out the ISO setting, but in the product photography, the camera’s ISO is set to 500. Does this mean it’s base ISO is 500 or not? Time will only tell. I have heard a rumor the VENICE’s base is 800 as well. Again, this base ISO is only a rumor at this time and not officially announced yet. 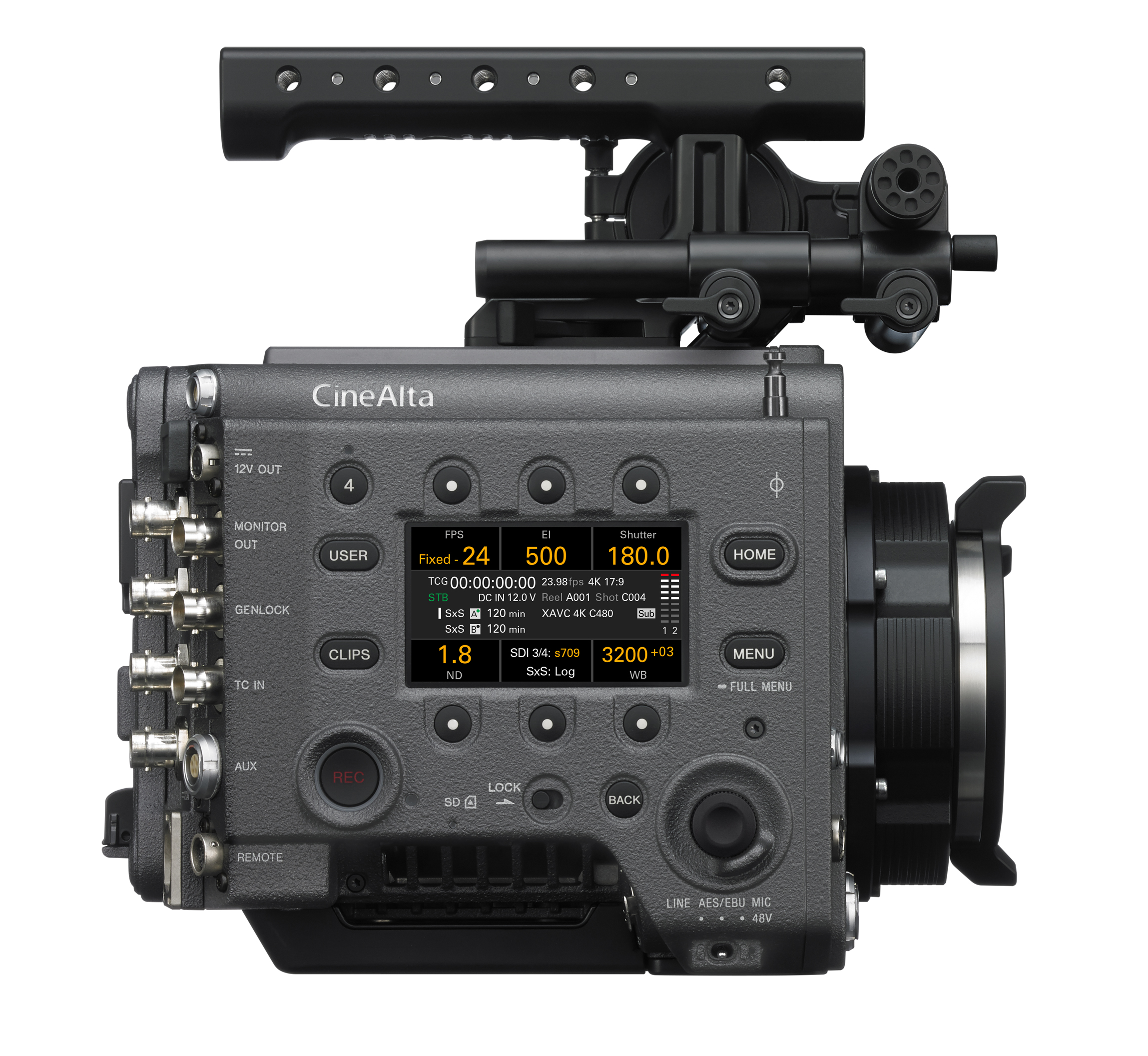