Available this Spring, the ultra-portable MP-CD1 Mobile Projector can project content up to 120 inches in size from a short distance of approximately 3.5m, and fits easily in the palm of your hand. 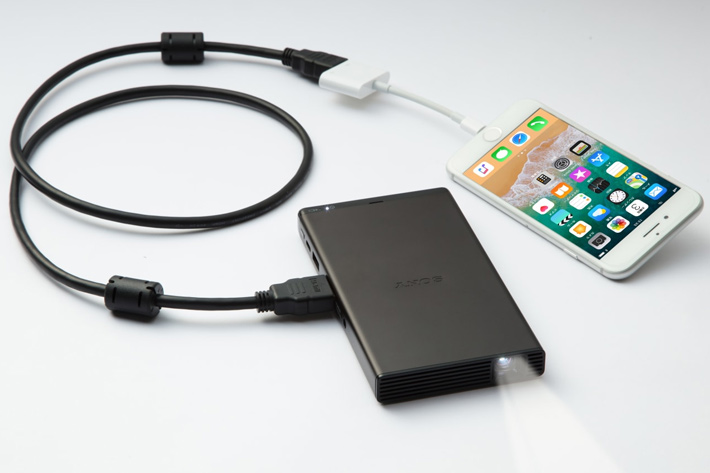 The Sony MP-CD1 mobile projector connects to a smartphone or other devices to create a home-theater experience anywhere you go.

Despite it’s small size (83.0 mm × 16.0 mm × 150.0 mm)  and weight (280g) the Sony MP-CD1 offers a large display, only needing a maximum of 3.45 meters to project an image of 305cm (120 inches). The presence of automatic keystone correction also means the projector can be placed directly on a table or desk and project a full-screen display without any need to prop it up or use a tripod.

The resolution may not be the highest, but for a portable solution like this, is acceptable, at 854 × 480, being similar to the one offered by Kodak’s new portable projector recently announced here at ProVideo Coalition.  Full color reproduction, a 16:9 aspect ratio, a rating of ANSI 105 lumens and 5,000mAh built-in battery, mean that users can project clear and bright images for up to two hours of projection time using the new Sony MP-CD1. 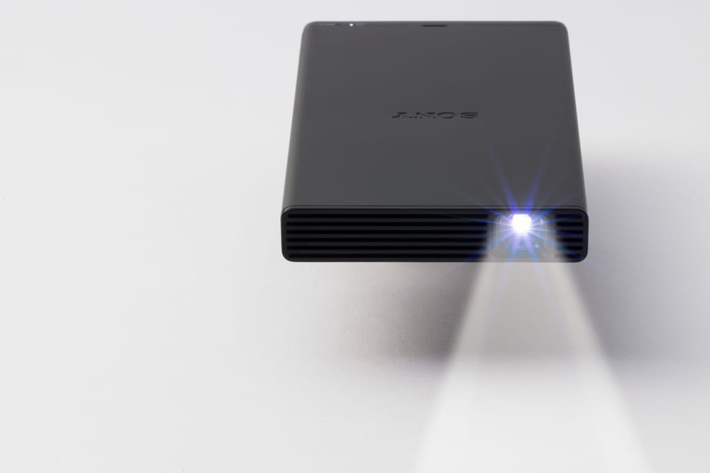 The projector’s display uses – Texas Instruments – DLP IntelliBright technology, which employs advanced image processing algorithms to boost brightness without compromising on battery consumption. The projector’s unique design allows it to minimise heat while still maintaining high brightness, in a pocket-sized form factor that has been recognised with an iF 2018 Design Award.

Simple setup and quick start are appreciated features for a portable projector. The MP-CD1 only needs a HDMI cable to connect to the world. The HDMI port is compatible with standard HDMI/MHL inputs. You can connect via cable to laptops, gaming consoles, Android devices, and also Apple devices (using a digital AV adapter, sold separately). Not much bigger than some smartphones, the projector is the ideal companion to share your videos with friends… or a client. The MP-CD1 boots up in only 5 seconds, and you’re good to go.

The 5,000mAh built-in battery is good enough for up to two hours of projection time. Usage time, though, can be extended by simply charging via the standard USB-C port, even whilst the device is in use, thus eliminating the need for carrying a proprietary AC adaptor which can easily be forgotten. If the projector needs to be used outdoors, the MP-CD1 can be easily charged from a portable power bank. One interesting thing more: it can also serve as a USB charger for your other mobile devices. So even if you’re not planning to make a presentation, the MP-CD1 is handy to have when you’re out and about. 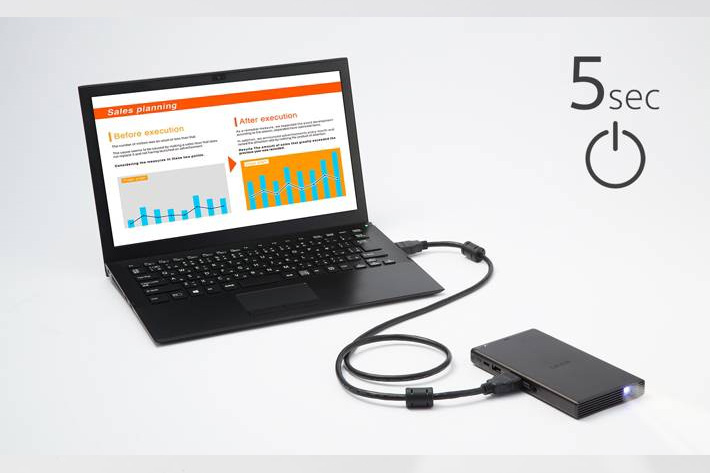 Sound is an essential part of any presentation, and the MP-CD1  is also ready for action. The standard audio jack lets you plug in either headphones or external speakers for multimedia entertainment. If needed, an optional HDMI dongle enables wireless connectivity with a variety of devices including smartphones and tablets for watching streaming content, thanks to simultaneous powering from a USB port to the dongle even during projection.

The projector’s auto keystone correction ensures a full-screen display without distortion, even when projected from an angle, while dynamic picture mode enhances images and videos to optimal brightness and saturation. A standard tripod socket is also located on the underside of the device to facilitate projection on any surface – even ceilings. 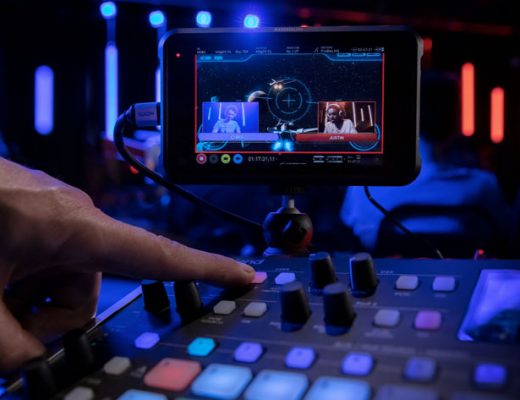