Does the camera have better mid-tones? Skin-tones? Or Does Sony Bone it?

My initial thoughts after the first few days of shooting with the Sony FS5 Mark 2 are this. The camera is still an incredibly easy camera to operate on the fly. The weight and the size of this camera is a big selling point for many. I see this camera living on a gimbal with an Atomos monitor/recorder attached to get the most out of the camera because the size and weight are perfect for shoulder blasting Ronin and Movi (a ReadyRig helps here). After shooting internal 4K and external 4K I have come to a couple very quick conclusions; the internal 4K recording is adequate and the external 4K recording easier to edit and appears to be the best way to go if you can make it happen with an onboard monitor/recorder.

The new way the Sony FS5 Mark 2 handles color is Sony’s big pitch for this camera. Apparently, Sony has taken their knowledge from building the Sony VENICE and applied those lessons to the Sony FS5 Mark 2. This means rich mid-range colors, better skin tones, and a softer look. I went back to my original Sony FS5 footage to see the difference from the new Sony FS5 Mark 2 footage and I can say I believe the Mark 2 has a softer tone, richer mid-tone color, and better skin tones. Are these changes super noticeable? Mostly, if you are cutting back and forth between a Sony FS5 Mark 2 and a Mark 1. Here’s the deal it does look better and the skin tones and shadows have a lot less unnecessary red chroma that seemed to kick up with shooting with the original FS7 and FS5.

Sony also gives you a nine different Picture Profiles so shooters can pick and choose just how their image looks. For me, I see myself either shooting almost exclusively on Slog 3 or I’d matrix the colors to best match the other Sony cameras I tend to use the most often. If that camera is a Sony VENICE then I feel comfortable I can tune the Sony FS5 Mark 2 to get it close to matching color wise. Lessons I learned while shooting on the Mark 2 were the usual ones: do not overexpose the image turns a little electric, and watch out for higher ISOs the Mark 2, like the Mark 1, is not the A7s so do not attempt to treat it as such or you will be stuck with a fair amount of noise. Below you can see a few frame grabs of HD video I shot during an immigration march in Nashville, TN. I think you can see the better skin tones in these images well.

This. This is and has been an absolutely amazing feature from Sony. When I first used it I fell in love with the variable ND wheel. I do not know how they pack so much ND filter power into this little camera but I love it. This feature alone is enough for me to choose the Sony FS5 Mark 2 over a similar camera. 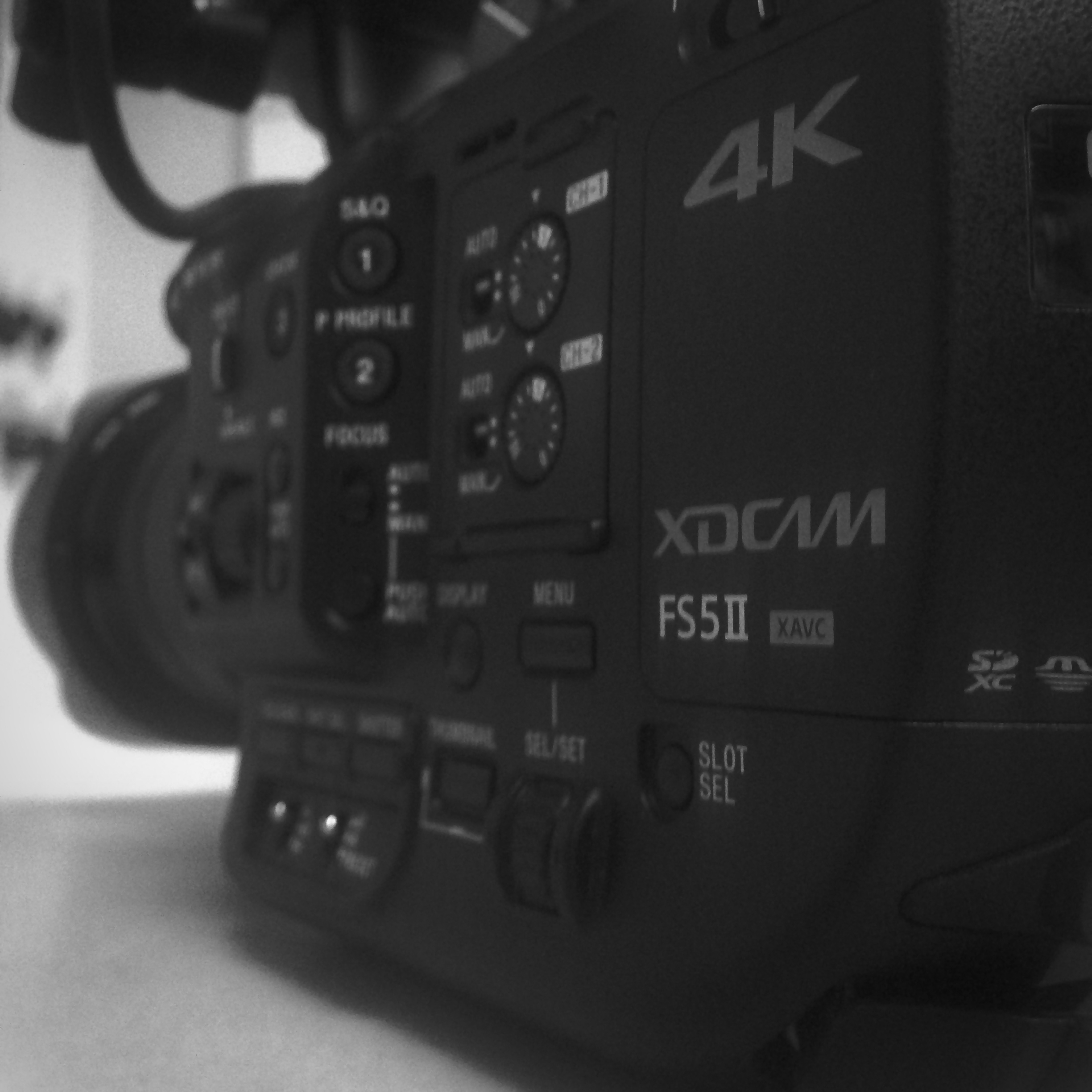 I think the Sony FS5 Mark 2 is best paired with a monitor/recorder so shooters can take full advantage of either shooting 12-bit raw video or Apple’s new ProRes Raw codec (I hope to see DaVinci Resolve accept this new raw codec soon), or recording 4K in the much more edit-friendly ProRes or DNxHR codecs. Sony’s XAVC codec found on the Sony FS5 Mark 2 can be a little processor intensive for an NLE to use. In my case, on my older Apple MacBook Pro, the XAVC is practically impossible to open let alone edit. 4K Apple ProRes is no problem but 4K XAVC and my computer stalls to snail speed. This should not be a problem found on newer and faster computers but just beware for shooters working on a budget and looking to either upgrade their editor or their camera. I am unsure if the Mark 2 raw recording is a paid license like it is on the original FS5 or if the feature comes with the camera. I imagine the raw feature requires a shooter to pay $499.00 for the raw feature which is the same between the two cameras.

Many may bemoan the native E-mount found on the FS5 Mark 2. When we have the Fujinon 18-55mm T2.9 and the Fujinon 50-135mm T2.9 made specifically because more cameras are being sold with native E-mounts than any other lens mount I think we do not need to worry about being stuck with Sony lenses. Yes, their Mirrorless lenses can have super small focus rotation making it damn near impossible to follow a subject down your z-axis but this mount likely keeps the cost of the camera down and it’s a Sony camera. Why the hell would Sony put any other mount on their less expensive video camera? It just makes sense and the lens market has a ton of E-mount options for the FS5 Mark 2’s Super 35mm sized sensor.  Plus, the autofocus on the Sony FS5 Mark 2 is good. It’s good enough to use it while shooting professionally from time to time. For me, I am a manual focus guy all around I just cannot get used to using autofocus. Like literally I develop beads of sweat on my forehead caused by autofocus missing stress that never seems to be fully realized but hey… that’s what happens after decades of shooting.

The good thing about using Sony cameras is their astounding number of functional and useful accessories found worldwide. From hot-shoe wireless microphones to v-mount battery plates the original FS5 and the new FS5 Mark 2 will have no trouble rounding up the necessary accessories to make shooting easy and fast. Even Wooden Camera has an E-mount to PL adapter for those who want to use more cinema style lenses.

The original Sony FS5 will not be discontinued instead it will be discounted. Discounted how much you ask? Right now, as I type B&H Photo has the PXW-FS5 listed for $4,248.00 and the in-stock PXW-FS5M2 is listed for $4,749.00. That is only a $501.00 difference and I think the better softer color in the Sony FS5 Mark 2 is well worth the $501 dollar difference.

Of the surface, looking at specs and features only which internet peps tend to do, the Sony FS5 Mark 2 looks like kind of a letdown, but do not let these people who haven’t used the camera sway your decision. Try the new Mark 2 on your own to see the difference in color. I definitely think the better color is worth the little extra cost. The Sony FS5 Mark 2 is not going to be your VENICE Killer. It is not going to be your C300 Mark 2 Killer. It is going to be a small flexible camera that can out punch its weight class if shooting with monitor/recorder.

There is no perfect camera. At times my Sony PXW-400 ENG camera kills it and other times my Blackmagic URSA Mini Pro is the best match for the job at hand. The Sony FS5 Mark 2 is flexible and when paired with the right job can fill its role very well.