Internal 4K movie recording and in-camera 5-axis optical image stabilisation are some of the features Sony refers to when talking about their new mirrorless model, the α6500. 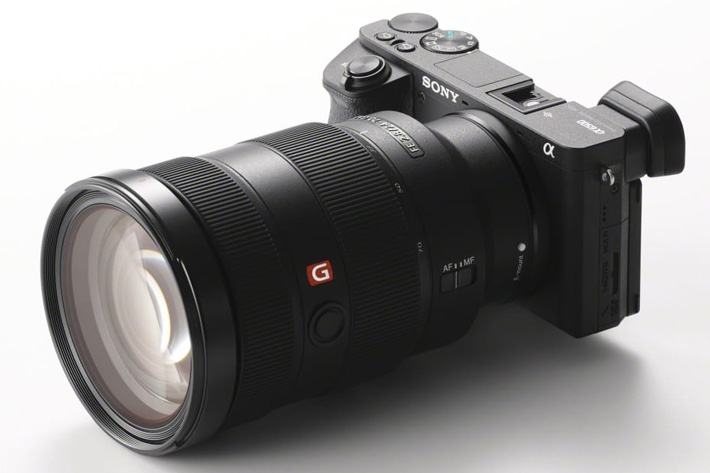 The new flagship APS-C sensor camera from Sony follows the logic of the series but introduces some new features that will make owners of the α6300 camera think about upgrading. Both photographers and videographers.

The new α6500 shares the same 4D FOCUS system as the α6300 camera, which can lock focus on a subject in as little as 0.05 seconds, the world’s fastest AF acquisition time among interchangeable-lens digital cameras equipped with an APS-C image sensor, as of October 2016, based on Sony research, measured using CIPA-compliant guidelines, and internal measurement method with an E PZ 16-50mm F3.5-5.6 OSS lens mounted, Pre-AF off and viewfinder in use.

Also shared with the α6300, the new α6500 features 425 phase detection AF points that are densely positioned over nearly the entire image area – the world’s highest number of AF points on any interchangeable lens camera, as of October 2016, based on Sony research.

In practical terms and away from the “world’s most…” competition that always seems to be present in the market these days, what this means is that the new model can shoot images at up to 11 frames per second with continuous autofocus and exposure tracking and up to 8 frames per second in a live-view shooting mode that makes it easy to track fast moving subjects, as it combines all of the benefits of an electronic viewfinder with the immediacy of an optical viewfinder.

Sony claims that the camera can shoot at these high speeds for up to 307 frames (with “Hi” continuous shooting mode and “Fine” image quality) thanks to its expanded buffer, which, along with the fast response speeds described above, are all achieved with the support of a new front-end LSI chip that has been added to the camera. This new front-end LSI also serves to enhance both still and video image quality.

So, this takes us to the video department, where the α6500 has some surprises. The α6500 becomes the latest Sony interchangeable lens camera to offer internal 4K movie recording, as it can shoot 4K UHD (3840x2160p) video in the popular Super 35mm format on the full width of the image sensor. When shooting in this format, says the company, the camera uses full pixel readout without pixel binning to collect 6K of information – approximately 2.4x (20 MP equivalent) as many pixels as 4K UHD and then oversamples the information to produce high quality 4K footage with exceptional detail and depth.

Additionally, the α6500 will focus exceptionally fast during movie shooting thanks to its Fast Hybrid AF system, offers touch focusing for professionally smooth focus shifts, whilst also offering adjustable AF transition speed and AF tracking sensitivity. The camera supports the XAVC S codec during video shooting, which records at a high bit rate of up to 100 Mbps during 4K recording and 50 Mbps during Full HD shooting, ensuring maximum detail and clarity in both video formats.

Other professional calibre video features include the ability to record Full HD at 100fps at up to 100 Mbps, which allows footage to be reviewed and eventually edited into 4x slow motion video files in Full HD (25p) resolution with AF tracking. 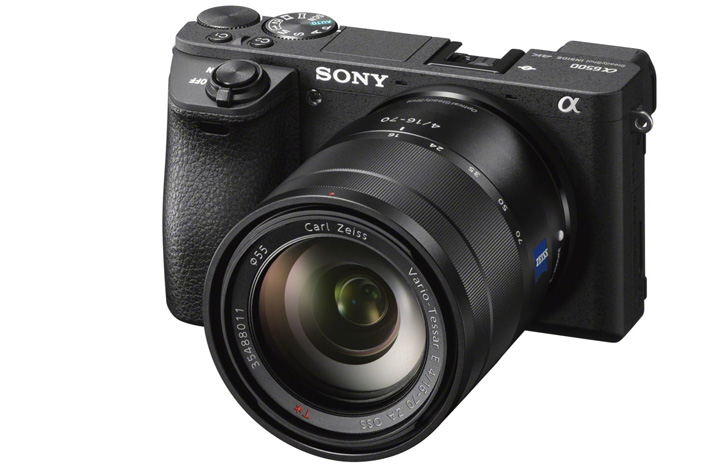 With a set of features similar to those present in the Alpha 99 II, the α6500 also incorporates a ‘Slow and Quick’ (S&Q) mode that supports both slow motion and quick motion. In this mode, frame rates from 1 fps to 100fps can be selected in 8 steps for up to 50x quick motion and 4x slow motion recording. Footage shot in this mode can be previewed after shooting without the need for PC-based post processing.

The touch screen on the α6500 offers users all the functionality expected from a touch screen and the option to lock focus on a subject simply by touching it on the screen. Sony says that it is ”a powerful compliment to its advanced AF system and video shooting capabilities” but goes one step further and in a first for Sony cameras, the α6500 features touchpad functionality. When utilising the viewfinder for framing and shooting, the LCD screen can be used as a touch pad. Simply drag a finger across the screen to shift the focus point from one area to another. The implementation here confirms that Canon, with their new EOS M, was not alone exploring the revolutionary feature. Sony was doing exactly the same!

So, if all this works as promised/expected, videographers and photographers will want to move on to the α6500. Also because the camera features in-camera 5-axis optical image stabilisation, making it the first Sony APS-C sensor camera to offer all of the benefits of advanced in-body stabilisation, which include a shutter speed advantage of approximately 5 steps.

One interesting aspect here is that Sony managed to develop a stabilisation system that fits entirely within a body that is nearly the same size as the α6300 model. One more note: the shake compensation provided by the system works with a variety of lenses, including E-mount lenses without OSS (Optical SteadyShot) stabilisation and A-mount lenses[vii] when used with a compatible mount adapter. When an E-mount lens with OSS is mounted, pitch and yaw are compensated in the lens and horizontal, vertical and roll axes are compensated in the camera body, resulting in optimal 5-axis stabilisation. 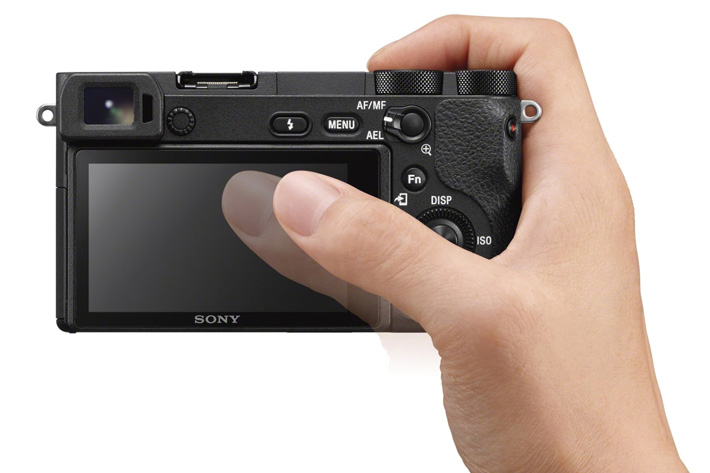 With a simple half press of the shutter button, the effect of the image stabilisation can be monitored in the viewfinder or on the LCD screen, allowing framing and focus to be accurately checked and continually monitored. This is available even when a lens is attached that does not have built-in shake compensation.

The general features of the α6500 include an APS-C sized 24.2 MP Exmor CMOS sensor that works together with a BIONZ X image processor and the newly developed front-end LSI to maximise processing power and achieve an impressive sensitivity range of ISO 100-51200.

The image sensor employs a thin wiring layer and large photodiode substrate that maximises light collection efficiency, plus copper wiring in its structure for outstanding read-out speed. The BIONZ X image processor and newly developed front-end LSI ensure superior image and video quality with low noise even when using higher ISO settings, in particular those at high sensitivity values where other cameras typically struggle. The LSI is also responsible for the expanded buffer depth for continuous shooting. 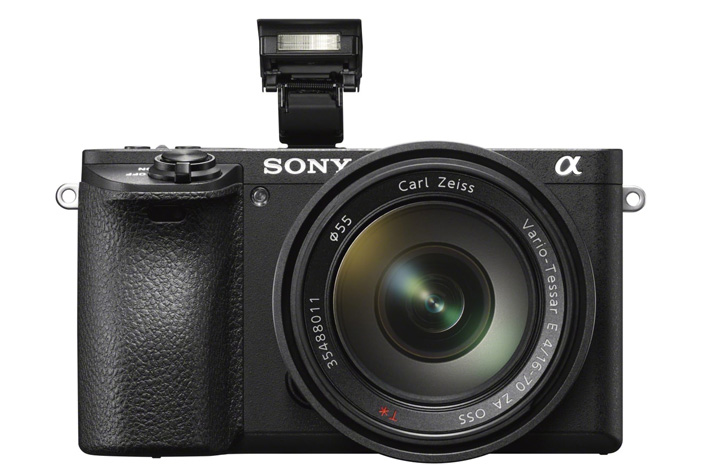 Sony says that the new α6500 has a refined design, maintaining the mobility of the α6000 series while adapting much of the usability of the α7 II series. The new model features the same high contrast, high-resolution 2.4 million dot XGA OLED Tru-Finder as the α6300 that offers exceptional corner-to-corner visibility. New hardware features on the α6500 include a magnesium alloy body and a high-durability shutter with a tested life span of approximately 200,000 release cycles. It also has several design features that are borrowed from the α7 II series of full-frame cameras, which include a robust lens mount, a recessed grip to improve handling, a larger release button and ten total custom buttons including ‘C1’, ‘C2’ and ‘C3’. It also has an improved operation feel for its mode and control dials and rear face buttons, as well as a softer eyepiece cup for more comfortable usage.

Changes are not only reserved for the shell, because in terms of software Sony is adjusting menus, following feedback from users. On the software front, there is a new overall user interface, which allows for a much smoother process for searching and adjusting menu settings, as well two new metering modes – Highlight, where exposure metering is focused on the brightest area of the frame, and Entire Screen Avg, which maintains an average metering for the entire image.

The Sony α6500 interchangeable lens camera will ship this November for about $1,400.