The 2016 “Stick Figure Battle,” which has garnered more than 23 million views, pitted two students against each other as they draw fighting stick figures on a classroom whiteboard. The recently released “Stick Figure War” increases the stakes, not only incorporating an entire classroom of students, but bringing extensive cutting edge visual effects to bear. Created by filmmakers Sam Wickert and Eric Leigh, the two are no strangers to pushing the envelope. 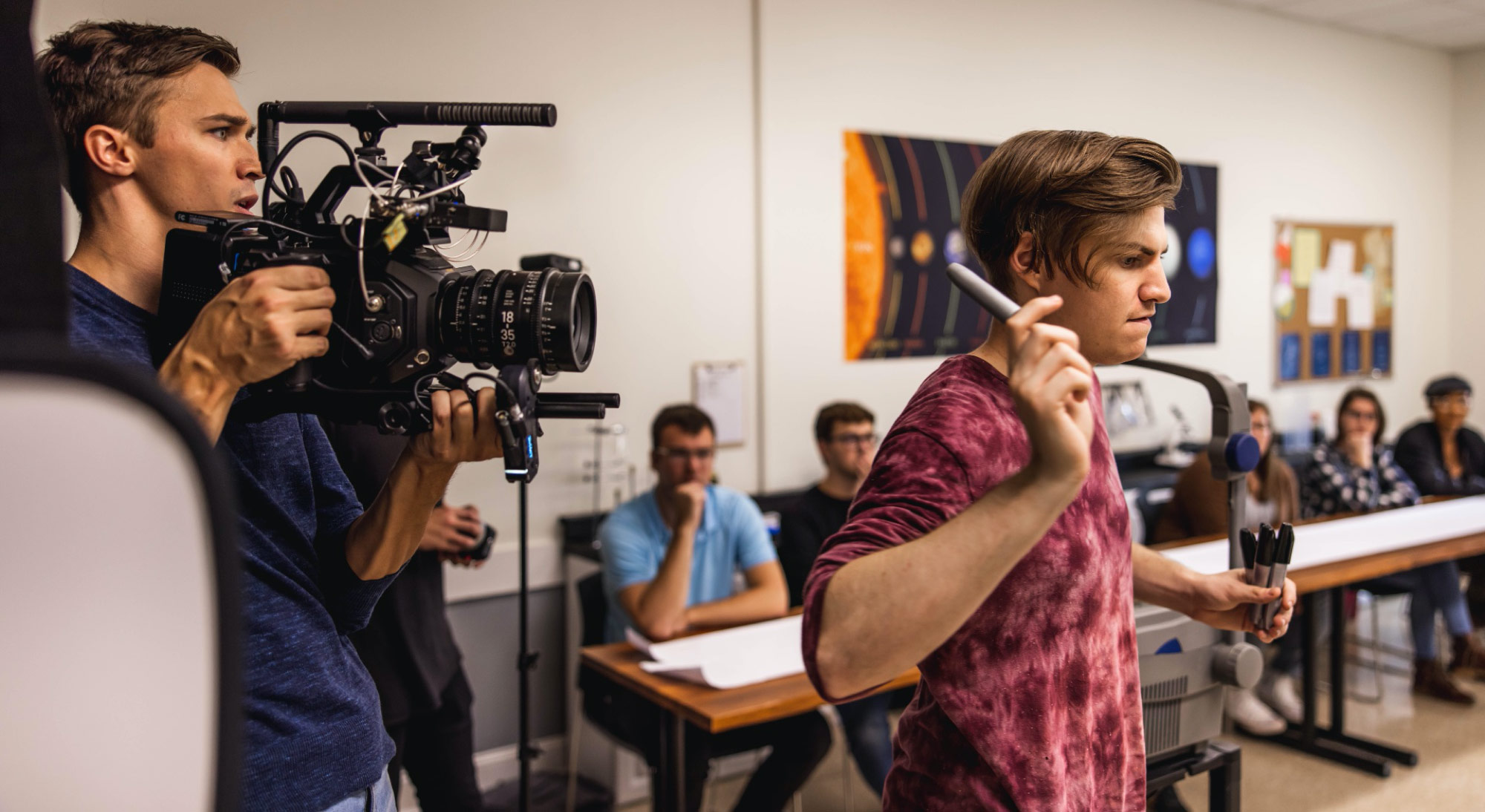 Production of the live-action took a single day, despite the 70 shots slated, and was shot entirely with the Blackmagic URSA Mini Pro 4.6K G2. “Blackmagic cameras are our current go-to cameras for any production we’re working on,” said SoKrispyMedia’s producer Micah Malinics. “From the early beginnings of this project, we knew we were going to shoot on the Ursa Mini Pro G2. We had previously used it on ‘Chalk Warfare 4’ and it really took our cinematography (and the total look of the film) to the next level. Blackmagic Design cameras fit perfectly into the mantra of our channel and our work. They allow us to capture an incredible image while operating on a very run and gun, small team style production.”

In preparation for extensive speed ramps in post, Wickert used the camera’s high frame rate capabilities during production. “We shot the actor’s performance sequences at 60 frames per second to allow for speed ramps later, and all in Blackmagic RAW,” said Wickert. “The Blackmagic Micro Studio Camera 4K, on a rail system fed into a Blackmagic Video Assist 7” monitor for recording, was used for the top-down hand shots for the students drawing. The portability of the Micro Studio Camera allowed us to also set up a matching top-down shot of a desk in our office for added shots later. This allowed us to always iterate and have a camera that was set up ready for us to shoot great new shots on the fly.”

With principal photography finished, the often arduous task of completing visual effects was accomplished quickly and efficiently with the combination of Unreal Engine and DaVinci Resolve Studio. Editing started in DaVinci Resolve Studio, while Wickert, who also served as Visual Effects Supervisor, worked with visual effects artist Brendan Forde in managing the elements to build each shot.

“We utilized Fusion for a number of shots,” said Forde. “Fusion’s 3D system makes it really easy to apply and manipulate our stick figures as textures once we track the paper that they are on, particularly for the airplane sequence. With the texture node, we can render UV passes of our rotation, and that allows us to retexture paper with our stick figures and have them respond to the bending and flexing of the paper in compositing, making iteration much quicker.” 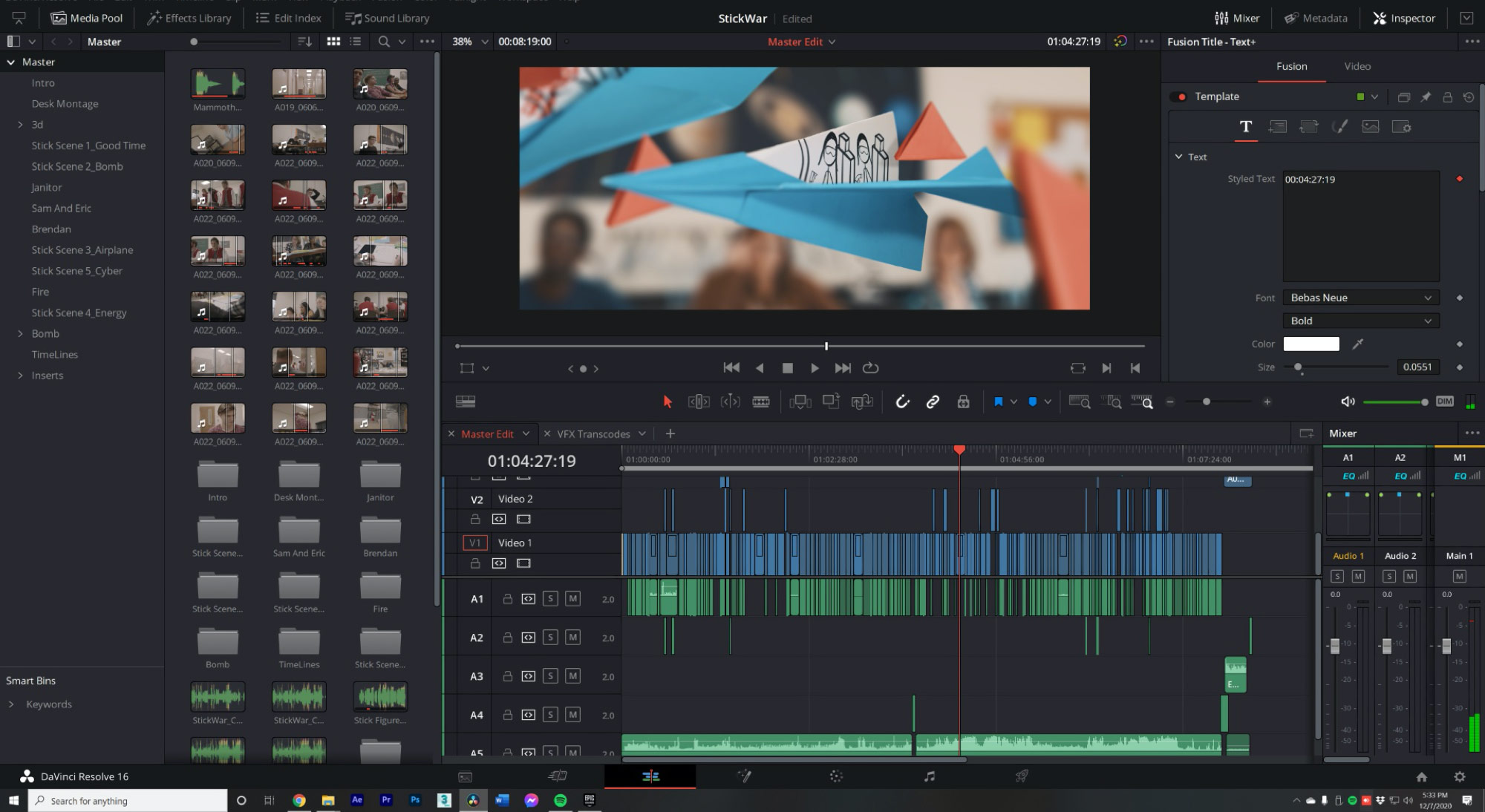 The flexibility of DaVinci Resolve Studio proved valuable once again to Wickert. “We used every panel in Resolve. It was my one-stop shop for the entire post of the film. Brendan is the node man, so he loves the node-based architecture in the Fusion workflow. As for me, I was responsible for all editing and color. And it’s so easy because it’s all just in one package.”

For the previous installment of “Stick Figure Battle,” the team was required to manually render elements for each shot, using a massively time consuming iterative render process. For the newest film Wickert chose to incorporate Blackmagic Design camera and post-production technology with Epic Games’ Unreal Engine, the Dell XPS Precision 7750 mobile workstation and the NVIDIA Quadro RTX 5000 GPU, a combination which would provide real-time rendering, and immediate response both on set and in post.

“Working on a pipeline between Blackmagic Design cameras, DaVinci Resolve software and Unreal Engine was surprisingly easy and intuitive,” said Wickert. “Between the full Blackmagic ecosystem with cameras, capture and playback and Resolve, we’re able to quickly and easily get up and running and integrate with Unreal Engine’s virtual production tools. To be honest, I don’t think if we had tried it any other way, it would have worked. Our current pipeline is running so smoothly, and we’re really happy with the images we’re getting.” 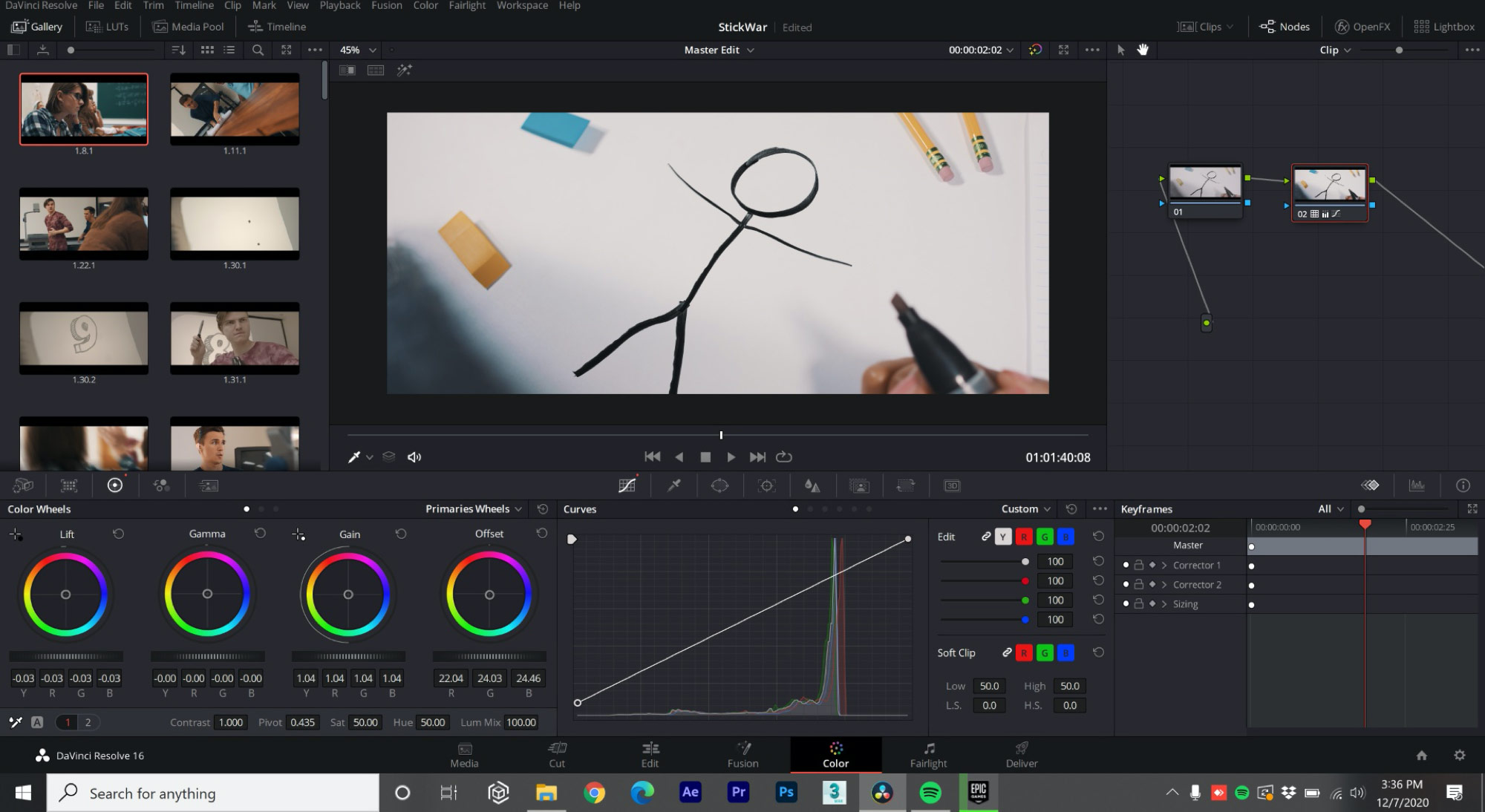 Throughout the process, the team realized they were only scratching the surface of what they could do by combining Blackmagic gear with tools like Unreal Engine. “We really feel Blackmagic cameras are the go-to solution for working with Unreal and virtual production,” said Malinics. “When a Blackmagic camera is connected via SDI to a computer using a DeckLink 8K Pro card, for example, you unlock access to the cameras feed through Unreal Engine’s plugins and Blueprint nodes. This literally allows you to directly access and code your video feed into your Unreal Engine scene.”

The process began with motion capture at MOTIVE School of Movement, where the team could live capture the action for the stick figures and view them directly through Unreal Engine. This ability to preview the animations even as they were captured gave the team-high confidence that what they were seeing would work. The stick figure characters themselves were built in 3D, then imported into Unreal, along with a variety of other models from the Unreal Engine Marketplace. 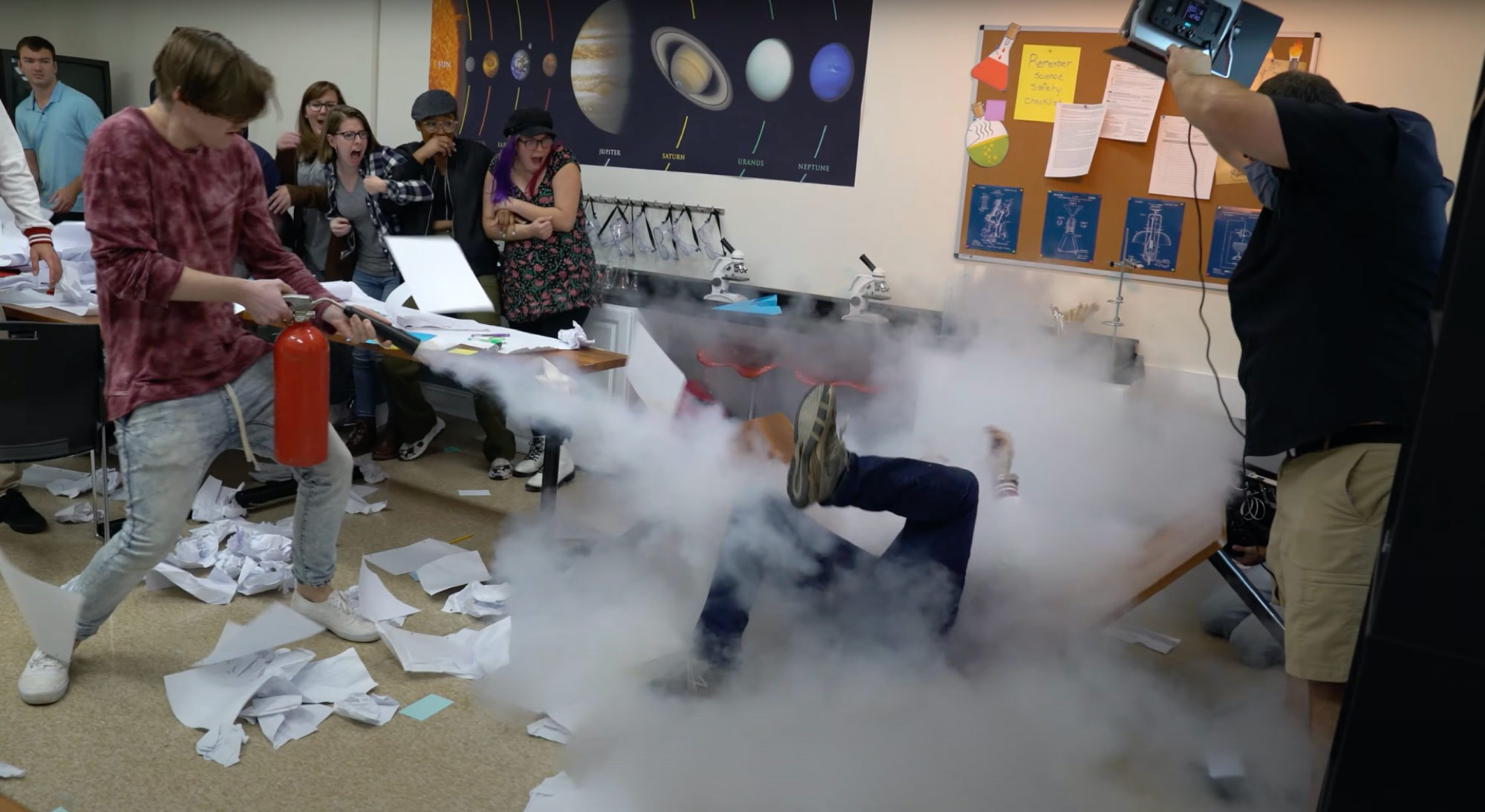 With the success of “Stick Figure Battle,” the team is already looking on to the next project, where they can take the existing technology and push it to the next level. “We are looking forward to doing some live virtual production in the future, where we can combine live video from our BMD cameras, live and/or prerecorded motion capture, and virtual assets all coming together inside the Unreal Engine workspace,” said Forde. “Blackmagic’s products and tools are the most accessible, being both easy to work with and affordable, for all our work.”

As virtual production quickly becomes the buzz word in the entertainment industry, SoKrispyMedia is eager to show off their capabilities, all done without massive budgets. “We’re on the brink of another big breakthrough for content creators in the form of 3D tools, CGI and real-time rendering,” said Wickert. “This type of technology, usually reserved for big VFX studios working on Hollywood blockbusters, is now becoming more accessible to small teams and creators on YouTube. Take that newfound technology and combine it with Blackmagic Design’s affordable yet ultra-powerful hardware and software, and now anybody can produce high quality content without massive budgets.”