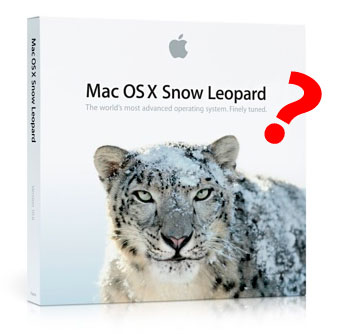 So I was thinking about dipping a toe into Snow Leopard. As I only have two Intel based machines (an 8 core Mac Pro and a black MacBook), I figured I’d try it out on the MacBook first.

First thing I did was pick up a copy on sale at MacMall for $25 – cheapest OS upgrade ever!

Then I went to Burning Man and didn’t care about computers for a week, a process I highly recommend. After I was back for 5 days, then I started to care about computer stuff again, I sat down and started looking at my Dock to see what was the software I use regularly that I’ll care about compatibility with.

Read on for how I evaluated whether to upgrade, and for which system.

Anyway, I organize my Dock by complexity of content/task – which is why unformatted text is on the left, and HDR bracketing software and compositing is on the right. Start simple, get more complex. I’m not entirely strict about it, since I eventually just started putting new camera stuff on the right.

I used a couple of different resources to find compatibility –

Alphabetical tour of my dock for compatibility and in case anybody cares about what tools I use:

Activity Monitor – there will be a new one, and I use this daily – I use it to track CPU utilization to see if something is chewing cycles unreasonably, and also to see if something IS chewing them reasonably (I test a lot of software, not always for public review). It is also good to see network and disc traffic transfer rates – how fast is that download/upload going? Is that FireWire transfer running at full speed? And so forth – very handy.

A Better Finder Rename – great for bulk renaming of files. I don’t use it daily, but when you need it, you NEED it. Money well spent! Version 8.2.8 is compatible with Snow Leopard – so I upgraded from 6.x, free update, my registration still worked.Nice install process – double click the app, and it asks to install the System Pref and Contextual Menu – very nice!

TextWrangler – I don’t use Word, ever. I’m either formatting text (InDesign or Keynote) or I’m not – and if not, I’m using TextWrangler, the free cousin of BBEdit. Version 3.0 is Snow Leopard blessed, so I updated from 2.1.3.

TextEdit – OK, if I want to format a LITTLE bit, TextEdit, since I can do fonts and styles. I’m using it for this post to prep my content. Anyway, part of OS X again – so guaranteed compatibility.

Preview – best freebie image viewer, and even allows for a little basic editing/color correction in a pinch. Part of OS X, so yeah, new one.

QuickTime Player – Scott Simmons wrote about some of the issues/limitations/omissions of the QT X player, so don’t forget to install the QT 7 Player to maintain functionality. For pro users, this is a serious step backwards!

Safari – I don’t feel compelled to use Firefox, and I was surprised to find that about 1/3 of my HD for Indies readers did when I started using Amazon Affiliate ad blocks (which broke it at the time). Anyway, part of OS, I’m still good

Mail, Address Book, iCal, iChat – same story, part of OS, new ‘n improvulated version part of the deal. Note I put all the Intar-Webs schtuff together – that fits for the way my brain is organized.

Yahoo Messenger – details here:
Download Yahoo Messenger fo Mac 3.0 Beta (Snow Leopard Supported) | Messenger Town Note the new build (191946) is newer than the v3 beta 4 I had been running – even if on V3 beta, you may still need a newer version

iTunes – I recommend you get your version 9, unless you have a Palm Pre. But isn’t required for Snow Leopard, but has some cool new features, esp. for iPhone users wanting to organize their apps

iPhoto, iMovie, iDVD, GarageBand, iWeb, aka iLife 09 – should all be fine, iPhoto is good back to version 6.0.6 according to online reports. iPhoto is the only one of these I use regularly. Matter of fact, time to kill iDVD and GarageBand and iWeb from the dock….

Red Alert and Red Rushes – OK, now we’re getting into production issues – I had version 3.6 installed, I see version 3.8 is available that supports the new ProRes variants (LT, Proxy, and 4444) from Final Cut Pro 7. There’s a nice thread on Red User that discusses various Snow Leopard issues for users like me (and probably you if you’ve read this far):

According to this page on the Avid site, 10.5.6 is the latest officially supported OS for Media Composer (10.5.8 is the latest in the 10.5.x series, out for some time now). Avid isn’t super fast to announce support for new OS versions.

Some people are getting it to work, one guy had activation troubles and Avid wouldn’t help since 10.6 not officially supported (yet), so be careful on that one. Rely on that system to run Avid to make money? Don’t do it.

Final Cut Pro – Final Cut 7 I was told by the product manager would run fine, I’ll certainly take his word for it. Final Cut 6.0.6 and 5.0.4 are reported to work, although note the QuickTime X issues.

Some other threads of note/interest:

Apple – Support – Discussions – Having some troubles with Snow Leopard …

The reason Apple released Final Cut Studio (3) BEFORE Snow Leopard, I believe, was that it did not support any of the new features in Snow Leopard. FCS is not 64-bit. It is not Grand-Central Dispatch aware. It does not support GPU-based rendering.
In other words, upgrading to Snow Leopard will not significantly improve or change the operation of Final Cut Studio. For that, we will need to wait for a future release.
So, as you are weighing whether and when to update to Snow Leopard, be sure to make the decision for the correct reason: there is something in it that you just can’t live without. Because Final Cut 7 will still be essentially the same.”

The reason Apple released Final Cut Studio (3) BEFORE Snow Leopard, I believe, was that it did not support any of the new features in Snow Leopard. FCS is not 64-bit. It is not Grand-Central Dispatch aware. It does not support GPU-based rendering.
In other words, upgrading to Snow Leopard will not significantly improve or change the operation of Final Cut Studio. For that, we will need to wait for a future release.
So, as you are weighing whether and when to update to Snow Leopard, be sure to make the decision for the correct reason: there is something in it that you just can’t live without. Because Final Cut 7 will still be essentially the same.”

Batch Monitor – I like to see what’s up with my batches, bitches. Yo.

So should work, buuuuuuuut…as always, taking the time for a full reinstall for production systems is worth it.

Multibridge Utility – I have a Blackmagic Multibridge, but have an older version installed on the laptop for when using the MB-X as a freestanding video converter.

those are the CS4 tools I use most, also see this:

Keynote/Pages/Numbers – I love Keynote for presentation stuff, SO much better than PowerPoint! Same for the others too. They seem to be OK, except for printing glitches in Keynote – no biggie.

Microsoft Excel/Word – I haven’t updated mine in FOREVER, and really only keep them around as a Just In Case. I’m running Excel 10.1.9 from about 2001 or so. If it breaks…I don’t care all that much – willing to let it go. iWork opens/saves in these formats, anyway.

Nikon Transfer, ViewNX, CaptureNX2 – doh! Do NOT work under 10.6! At all! I need these to read RAW files from my new Nikon D300S, since no OS version reads the native RAW .NEF files yet. I do my photo work on the desktop mostly, but for on the road, I’d need these! Otherwise I could do a Finder copy of card contents but then not see the images. PROBLEM.

Photomatix Pro 3.0.3 – I use this for merging multiple exposures to make HDR (high dynamic range) images. My new Nikon D300S can do both 9 shot bracketing and has an intervalometer, if I can merge those two functions I can do HDR timelapse (I hope!). So I use this for that. There is a new version 3.2.2 I need to download for Snow Leopard compatibility.

Bracketeer – quicker and simpler than Photomatix with a more reliable batch mode but fewer controls and less dramatic results for HDRs. It has issues:

Bracketeer 3.3.1 software download – Mac OS X – VersionTracker: “An emergency update for Mac OS 10.6 / Snow Leopard ONLY! This version saves out JPEG files instead of TIFF’s because the current build of Enfuse is not compatible with 10.6. It cannot save TIFF files, so we had to rig this version to save out JPEG’s instead since Enfuse seems to be able to do that okay on Snow Leopard. Users on 10.5 should stay with version 3.3.”

Aperture 2.1.4 – Snow Leopard compatible, but I haven’t started really using it yet – for organizing photos, iPhoto is awesome – GPS with Places is golden, and Faces, while flawed, is still a great tool. When Aperture gains these features is probably when I’ll consider moving the library over from iPhoto.

Adobe Lightroom – I still have 2.1RC1 running on the laptop, but v2.4 is latest. Even that has display glitches when panning at 1:1. For now, for my casual stuff, iPhoto suffices. If it doesn’t, I go to Photoshop for the heavy stuff.

….and that’s the apps on my Dock. I also keep shortcuts for Applications, Utilities, and Projects folders to the right of the divider so I can get to them quickly.

IN SUMMARY: SNOW LEOPARD: GO OR NO GO?

For production machines: Houston, we have a problem – abort launch (at this time)

For daily biz laptop (email, web, pics, etc.) – mmmmmmmmmaybe, if I feel like it – but the costs are outweighing the benefits in my head….today. But probably in the next month for sure.

So looking at all this, I’ve decided I MIGHT install Snow Leopard on my laptop if I get a hankering to poke around on it in the next week or so.

But for my desktop box, DEFINITELY NOT. And here’s why:

1.) No Avid support. It might run, but if I ever get into trouble….

2.) No Nikon app support – I can’t even view the RAW files without these apps, so I gotta have it. In the meantime, I’m just importing all those stills into a folder in my Pictures folder with Nikon Transfer until I can bulk import them into iPhoto once the RAW support comes from Apple. Which may or may not be OS X 10.6.x only – I might HAVE to upgrade to get support. I figure it’ll take another coupla months based on prior update schedules (such as when my D90 came out)

3.) And also it is just a x.0 release. Maybe when 10.6.1 comes out, I’ll install it on the laptop. But it just isn’t a big enough push to go ahead. I also realized, while putting this article together, that I don’t want to run into an “Oh,,, sh*t!” moment when I discover some rarely used but crucial tidbit won’t run.

So for now, Snow Leopard stays in the plastic wrap.

Keep in mind, this is just me, with my specific needs, and doesn’t apply to everybody. Are you a regular FCP user? You may well choose to upgrade and be happy with it. But for me, for now…not yet.

OK, now to go be productive with my day – which half the reason to consider installing it in the first place.