SmartSound has made some great advancements in their software plug-ins for Adobe Premiere Pro and After Effects since I did my last how-to tutorial two years ago and posted here on ProVideo Coalition. I just recreated two new short video tutorials and wanted to share them with you here, to show you just how easy this NEW round-trip method is to create/edit music soundtracks for your video/animation projects starting inside your video production apps. 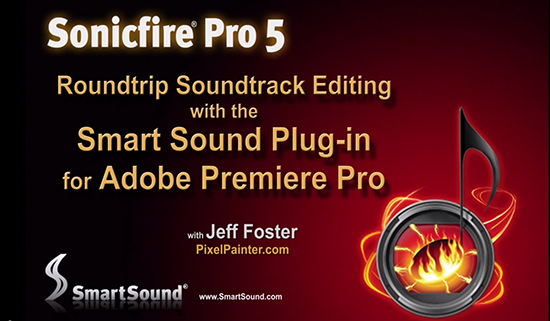 If you’ve never heard of SmartSound before, then you really, really need to check them out. These videos cover the new SmartSound plug-in workflow only and assume you may already be familiar with their desktop sountrack creation software, Sonicfire Pro 5 – as well as a basic understanding of Adobe Premiere Pro and After Effects CC 2014 (or CS5, CS6, CC). But I also want to note that since these are only the Adobe video apps that I covered here, they have also updated the SmartSound plug-ins for Final Cut Pro X, Sony Vegas and Avid Studio/Pinnacle Studio 15, 16 & 17. 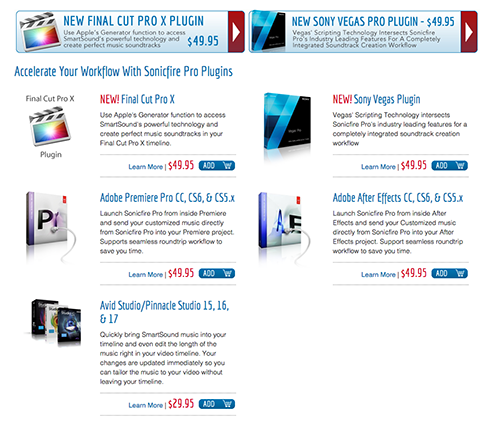 No, they’re not free – even if you already own the Sonicfire Pro 5 software app, but the money you’ll spend on one will pay you back the first project you use it on in time & frustration saved. This is a true “round-trip” workflow that allows you to start the process right inside your editing app launching Sonicfire Pro 5, then selecting th exact length of the audio sountrack you wish (or mix several inside the app on it’s timeline), then send back to the video app host you launched it from and it will automatically generate an AIF/WAV file and place it inside yoru project panel as an asset, ready to use. You can then use the plug-in to return to Sonicfire Pro 5 at any time – make further edits to the soundtrack and roud-trip back to the video editor with an already updated soundtrack. No exporting/importing/replacing. I just think it’s brilliant.

Here’s the short video tutorial showing you how to use the SmartSound plug-in inside Adobe Premiere Pro CC (2014 or earlier):

And here’s the video tutorial showing how easy the SmartSound plug-in for Adobe After Effects CC (2014 and earlier):

Visit their website for more information on SmartSound, the Sonicfire Pro 5 desktop software or any of the SmartSound plug-ins.

Over the last several years a few users have experimented with using CycoreFX (“CC”) plug-ins built into After Effects...
In April, FxHome spun off most of the plug-ins from HitFilm, their affordable After Effect “clone” app, into a...