If you’ve been working in this business for awhile you’ll most likely have fond memories of Automatic Duck. The Duck as it was often called provided many an editor with a path from their NLE of choice into Adobe After Effects. Later on The Duck help move from one editing and finishing system to another. Automatic Duck was doing their translation thing long before Dynamic Link was but a glimmer in Adobe’s eye. In 2011 Auto Duck moved into a partnership with Adobe and the translation tools went away. In 2015 Auto Duck returns via Red Giant Software with an updated Media Copy and Automatic Duck Ximport AE, a way to get Final Cut Pro X project into After Effects.

If you’ve been working in this business for awhile you’ll most likely have fond memories of Automatic Duck. The Duck as it was often called provided many an editor with a path from their NLE of choice into Adobe After Effects. Later on The Duck help move from one editing and finishing system to another. Automatic Duck was doing their translation thing long before Dynamic Link was but a glimmer in Adobe’s eye. In 2011 Auto Duck moved into a partnership with Adobe and the translation tools went away. In 2015 Auto Duck returns via Red Giant Software with an updated Media Copy and Automatic Duck Ximport AE, a way to get Final Cut Pro X project into After Effects.

Automatic Duck holds a special place in many an editor’s heart. Back in the day, here was a small company with a friendly face that solved the problem of moving from one big company’s media creation software to another company’s media creation software. It was no surprise these big competing companies didn’t talk to each other and make this translation easier so it took Automatic Duck to handle it.

We now live in a time when translation between the Adobe apps is built in. The Auto Duck tools for Final Cut Pro 7 aren’t really needed anymore. Many folks have moved on from FCP7 and Adobe has built the FCP7 XML into Premiere Pro meaning you can move freely in and out of PPro. DaVinci Resolve handles a lot of other translations and Avid Media Composer is, well … still doing what Avid does.

In the world of Final Cut Pro X Apple has gave us a new (and very affordable) Motion application for effects and motion graphics though they haven’t given an easy path to get an edit (or even a single clip) from FCPX to Motion. That doesn’t matter for many as a lot of FCPX editors still use After Effects anyway. Automatic Duck will now help get from FCPX to After Effects. 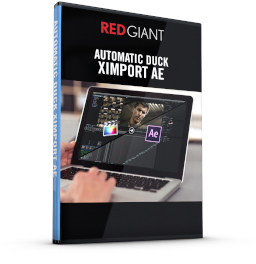 I think the big surprise here is Ximport AE ($199). While it’s no surprise to readers of this blog (we mentioned this might be coming after it was outed at the FCPX Creative Summit) it might be a surprise to those that don’t follow post-production news too closely. Wes Plate, one of the brains behind Automatic Duck, went to work for Adobe in 2011 as the Auto Duck technology was integrated into After Effects. Wes worked as a product manager for Adobe Prelude before leaving the company a few years later. Wes has been dabbling with FCPX for awhile now so I’m not surprised he would want to get his edits into After Effects. After all, that’s what brought on the original idea for Auto Duck, his own needs. 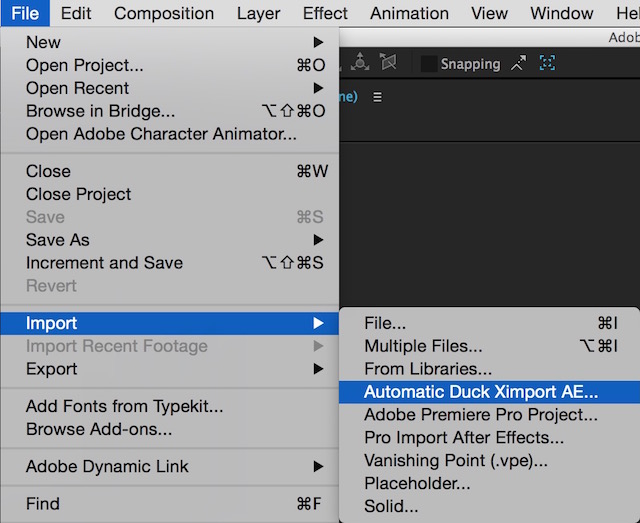 Operation is simple, first export an XML from your Final Cut Pro X timeline/edit/project. After installing Ximport AE you have that as an import option in After Effects. When that import box pops up those users of the old Auto Duck tools will see a familiar site as the old Automatic Duck logo is there in the lower left welcoming your XML. 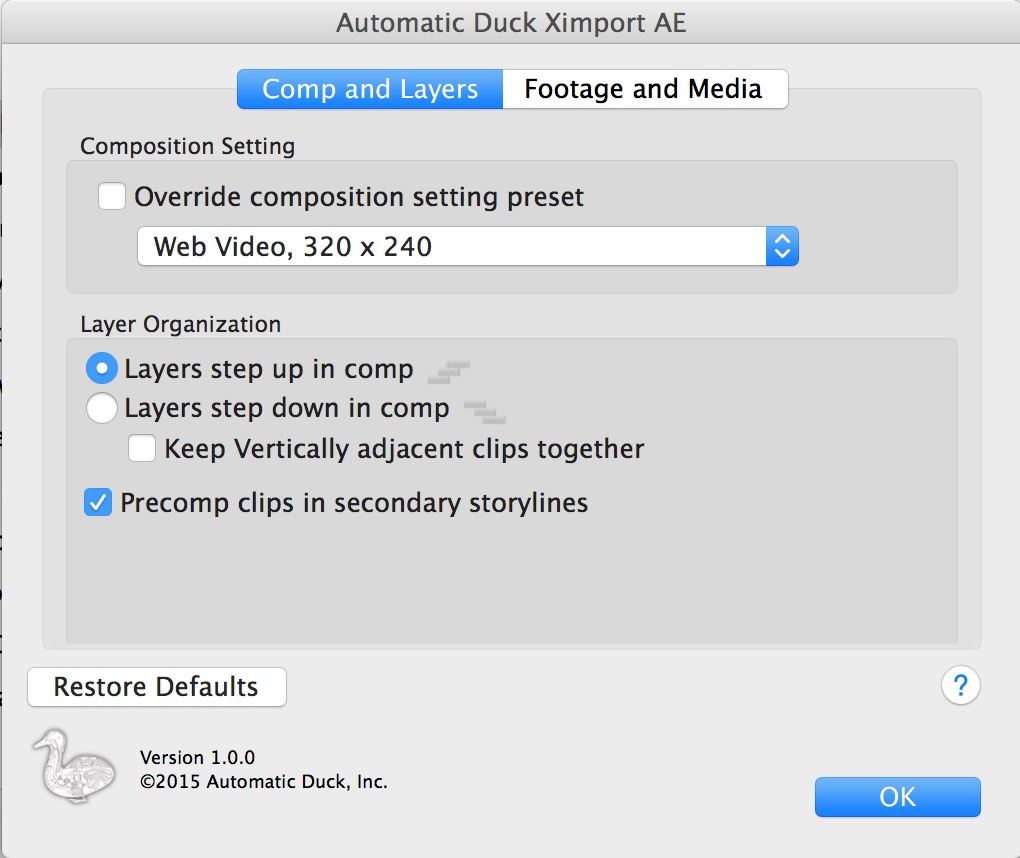 There are a few options that can be set. Users of the old Automatic Duck Pro Imports will recognize the option to have layers step up or down in the After Effects composition. One handy option is to take clips that are in an FCPX Secondary Storyline and have them import into an AE Precomp. That can help with the organization right out of the FCPX timeline. 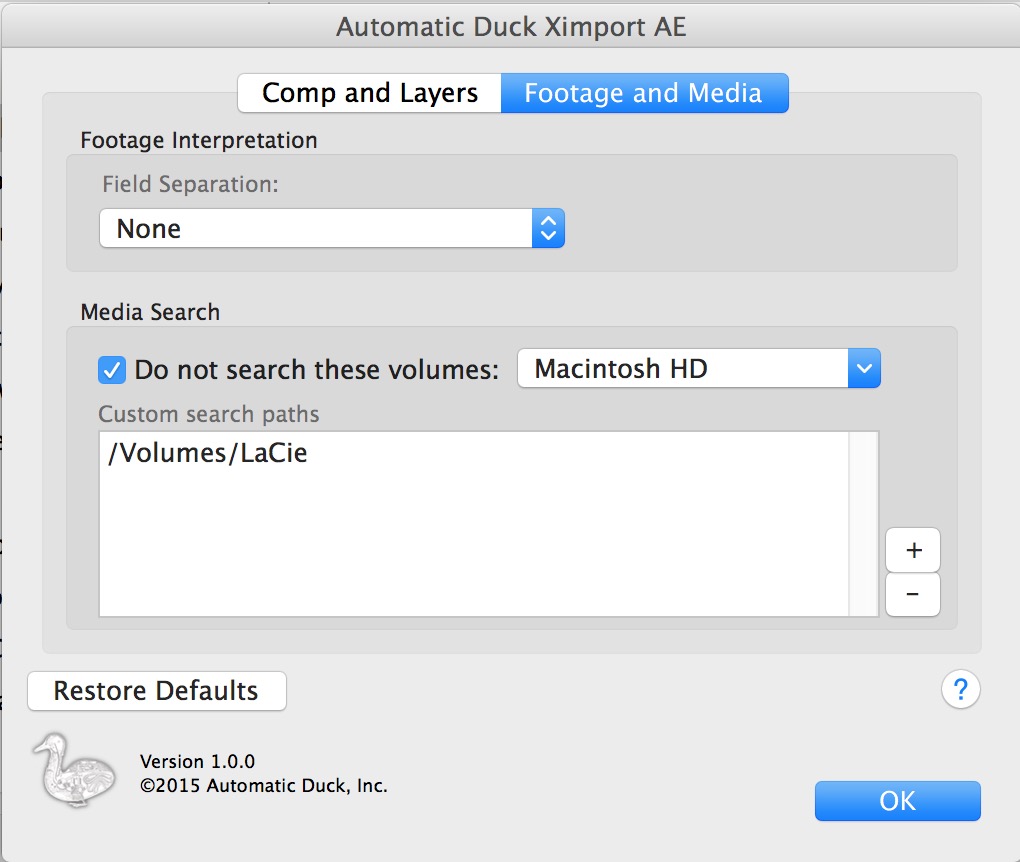 You can also exclude certain volumes from a media search in the Footage and Media Tab.

There is an extensive list of things that will translate from FCPX to After Effects via Ximport AE. The full list is on the Red Giant site and you really have to dig into that list to see how much stuff will translate. It’s a very impressive list that includes not just built-in effects but this party tools as well.

Above is a simple corporate edit that consists of some talking heads, broll, some motion graphics and audio.

Here is that timeline translated in After Effects via Automatic Duck Ximport AE. Like most AE timelines, it looks way more complex than it actually is. 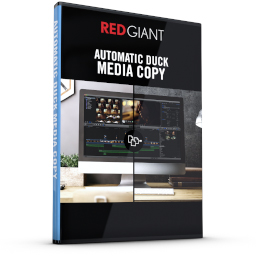 Media Copy ($99) has also been updated with this rebirth of Automatic Duck. Media Copy is a media management tool that takes an XML, FCPXML, AAF and a number of Avid options (and Avid project or bin) of an edit sequence and copies the media used in that sequence to a selected destination. This simple functionality will probably be of great interest to FCPX users since FCPX doesn’t yet have the ability to take an edited project and consolidate that edit to an external location with only that edit’s media. Plus it is available for Windows as well as a Mac.

Operation of Media Copy is simple as well. Export a Project XML and open that in Media Copy.

Options include preserving source media paths and folders, including Avid render files as well as the ability to include the original XML in the copy. That later option makes sense as that XML is important if you’re sending the edit to a colorist or another editor vs, just trying to archive some media. It is also a great way to send an FCPX edit/project to another editor since FCPX doesn’t yet include that option itself. Just have Media Copy copy the “edit/sequence files” and that FCPXML will be included in the destination drive. Import that into FCPX, relink and you’ve moved a project/sequence/timeline.

Media Copy also creates an HTML log to show exactly what was copied.

The above image is a Media Copy operation without the Preserve source media paths option checked.

I ran both Ximport AE and Media Copy through several tests including one FCPX cut that I did need to send to another editor (which I had been wondering exactly how I was going to do it). All operations completed as expected. The only thing I saw worth noting is that in FCPX sequences where I had multicam clips both Ximport AE and Media Copy would include include media from all of the cameras in the edit not just active angles.

In Ximport AE the reassembly of the edit with the multicam clips was spot on with each multicam angle being in a Precomp. Moving into the multicam comps I had a 400 layer composition that looked to be pretty much every clip from the shoot. This doesn’t seem to be a big deal as there wasn’t any new media created.

The multicam clips are something to be aware of when using Media Copy. Due to the way that Media Copy reads the FCPXML it seems to have to copy all the media in a multicam group instead of only the active angle. Apparently the XML lists all of the angles as resources in the XML and that’s what Media Copy moves. That’s worth noting because if you’re moving an edit for color grading you don’t need all that extra media but if you’re moving the edit for use in FCPX you might. What it illustrates more than anything is that FCPX needs some way to flatten or commit multicamera edits in the timeline.

While Media Copy is designed to support a number of NLEs Ximport AE is an FCPX support tool. I think the only real competition is Clip Exporter which is designed to send media and edits from FCPX to both After Effects and Nuke. Clip Exporter has one nice feature that Media Copy is missing in that it is able to truncate the clips in the edit and copy only the media in the cut with designated handles. The Media Copy help spells this out: Automatic Duck Media Copy does not trim or consolidate or otherwise reduce your footage, it copies the entire file that your AAF, OMF or XML points to. That would be a very nice feature to add in the future, at least for FCPX users.

The new to 2015 Automatic Duck tools will be available through Red Giant Software so purchasing, updating and support will be done through the Red Giant ecosystem. Of course there is a free trial.

It’s great to see Automatic Duck back and alive after several years away. It’s a rebirth of sorts for Wes and his father Harry as there are always workflow issues to take on and new tools to make. Hopefully this means the return of Duck shaped keychain bottle openers to the swag haul at NAB. In this age of craft brews we need them now more than ever.