Available now, the Radeon Pro WX 8200 graphics card gives users, according to AMD, the power to process GPU-based simulation and rendering workloads faster than the competition. 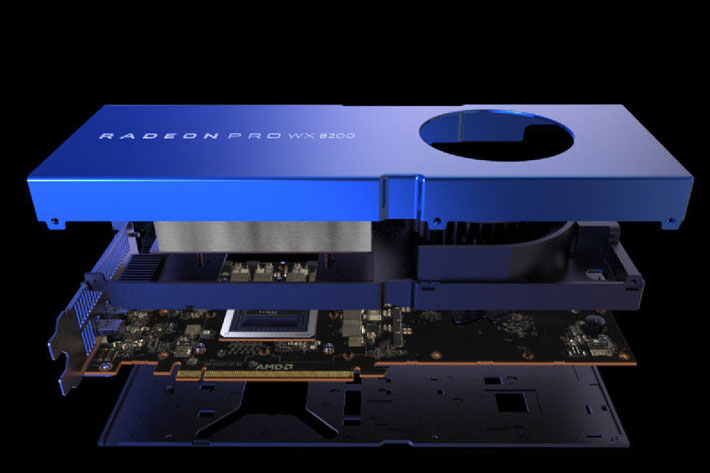 Created for real-time visualization, VR and photorealistic rendering, the Radeon Pro WX 8200 offers users the best workstation graphics performance for under $1000. $999, to be exact!

The price is set to attract attention. It’s just one dollar short of $1000, but that’s part of the marketing strategy. More accessible than the competition and even other Radeon solutions for workstations, the Radeon Pro WX 8200 aims to seduce those dreaming about having access to a high end professional solution… at a more human price.

Obviously, price is not everything, so the Radeon Pro WX 8200 graphics card finally made available is equipped with advanced features geared towards professionals, and certified on many of today’s most popular applications. Delivering high-speed, responsive 2D and 3D workflows and the massive compute performance required to efficiently process GPU-based simulation and rendering workloads, the Radeon Pro WX 8200 is built to provide a consistent, high-end experience.

“Professionals can fully unleash their creativity with the ‘Vega’ architecture at the heart of the Radeon Pro WX 8200 graphics card,” said Ogi Brkic, General Manager of Radeon Pro, AMD, at Siggraph 2018, when the card was announced. “This powerful new workstation graphics card empowers creators to improve collaboration among remote teams with VR, create exciting new cinematic experiences and visualize their creations with ease, all at an incredible price point.” 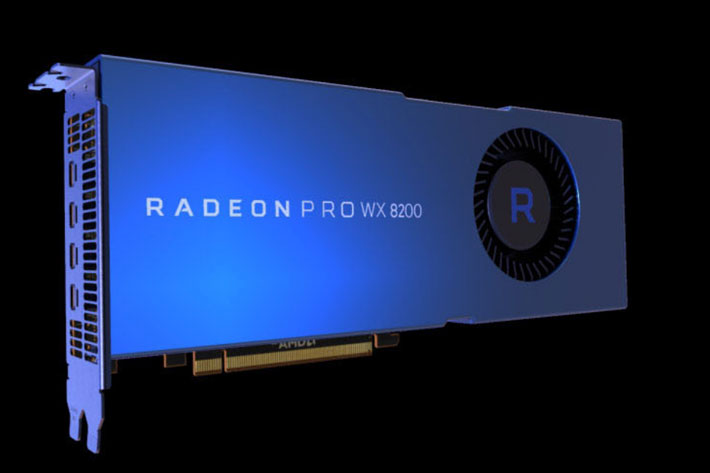 Power enough to design while rendering

AMD says that in Blender the card is up to 163 percent faster than the competition, while in Foundry Nuke 11, it is up to 33 percent faster. The company adds that “the Radeon Pro WX 8200 also excels at GPU multitasking for simultaneous graphics and compute workloads. For example, in Autodesk Maya it delivers the performance that allows users to design a CG scene while rendering the scene for production at the same time.” Gone are the days where rendering a model would render a workstation unusable for other tasks.

With Radeon ProRender rendering a scene in the background, the Radeon Pro WX 8200 delivers up to 76 percent higher frames per second than the competition at 1080p in Maya, and up to 361 percent higher frames in 4K. The Radeon Pro WX 8200’s advanced graphics architecture allows users to render and design at the same time, with up to 13x greater multitasking performance than the NVIDIA Quadro P5000, according to tests conducted by AMD Performance Labs as of August 7th, 2018. 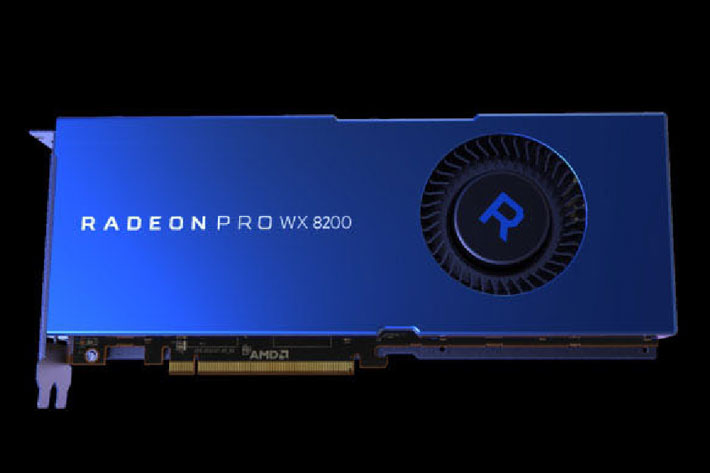 AMD’s numbers are good as a reference, but independent tests are more important. Browsing the web, the first reviews say essentially the same and indicate that AMD’s claims can be confirmed in terms of price/performance. According to the website KitGuru, the Radeon Pro WX 8200 “manages to get past its WX 9100 sibling”, which costs close to $1,800. The same review notes that although “it’s not quite a complete NVIDIA Quadro P4000 killer, because there are still some professional content creation and CAD applications where the latter has the upper hand” the WX 8200 manages to provide “similar or better performance for less, where the WX 9100 was a direct P5000 competitor and didn’t quite have the grunt to be the obvious alternative.”

Another website, HotHardware, notes that the card “is faster than the P4000 overall, for only slightly more money” and ““competes well with the P5000 for nearly half the price. AMD also offers the ability to easily switch between consumer and pro-graphics drivers, which offers another layer of flexibility for professionals that may need to test gaming workloads and need access to the latest game-ready drivers.”

No doubt, we live in interesting times. With projects becoming more complex and deadlines often becoming shorter, professionals need to be able to do multiple things at once to get the job done. Being able to do them at more accessible prices is essential, and solutions as the Radeon Pro WX 8200 play an important part, as they not only allow users to create more powerful and cheaper workstations, but also contribute to make the competition – Nvidia – develop a suitable and equally affordable solution.