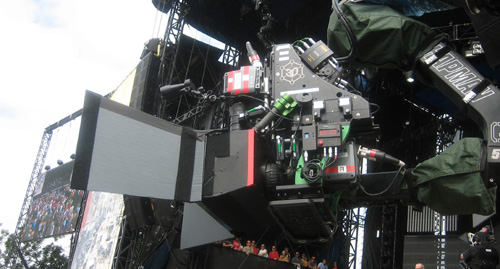 Element Technica, a leading designer and manufacturer of 3D rigs and associated equipment for motion picture and television 3D production, announces that its Quasar 3D rigs were used extensively in the production of “Larger Than Life in 3D” featuring Dave Matthews Band, Ben Harper and Relentless7, and Gogol Bordello.

3D rigs position the two camera and lens systems necessary to provide stereoscopic 3D images. The rigs must be rigid enough to hold the cameras in precise alignment through the production, easily adjustable in both interocular (the distance between the two lenses) and convergence (the distance in front of the two lenses where each camera’s view crosses the other), and lightweight enough to be carried on cranes, stabilizers and other camera support equipment.

Wayne Miller, president and CCO of Action 3D Productions, chose the Technica 3D Rigs as part of the complement of 3D rigs that were used to capture the “Larger Than Life in 3D” concerts. He credited the rig’s reasonable setup time with helping to keep the production budget in line. “The functionality of the Technica 3D Rigs is such that when you’re out on location shooting, they are quick to set up and calibrate,” said Miller. He noted that Action 3D has shot over 50 concerts in 3D to date, and will be releasing additional concert films under the “inconcert3d” banner to 3D-equipped theaters in 2010.
3D Technician Chris Burket, part of the Element Technica team, prepped 3D equipment for the concert shoots and operated as convergence and interocular puller during the concerts themselves. He explained, “The Quasar 3D Rig was quick to set up, and small and lightweight compared to previous 3D rigs that I’ve seen. It allowed us to fit the rig on a remote head quite easily, and worked extremely well throughout the show.”

Technica 3D rigs require only Allen wrenches and a mirror gauge for setup and alignment. Attesting to the Rig’s rigid construction, Burket explained, “The Element Rigs were set up at each venue on the day prior to the show, and the alignment held up well throughout the entire three days of the shoot. The only alignment adjustments necessary after that were as a result of lens changes. The rigs don’t need much TLC; they just perform very well.”

In his role as a Convergence Puller on one of the Technica Rigs during production, Burket said the remotely wired controllers allowed him to station himself five feet from the Camera Operator, maintain precise control of the rig’s interocular and convergence adjustments, and yet not interfere with camera operation. Technica 3D rig control is possible over much larger distances; one crane-mounted Quasar rig on the production was operated from 100 feet away by its Convergence Puller.

While the crew for “Larger Than Life in 3D” chose to use wired controls in order not to risk interference from the extensive amount of wireless RF involved in the concert, the Technica 3D rigs are fully capable of wireless operation.

“Larger Than Life in 3D” debuted in 3D-equipped theaters across the United States on December 11, 2009.