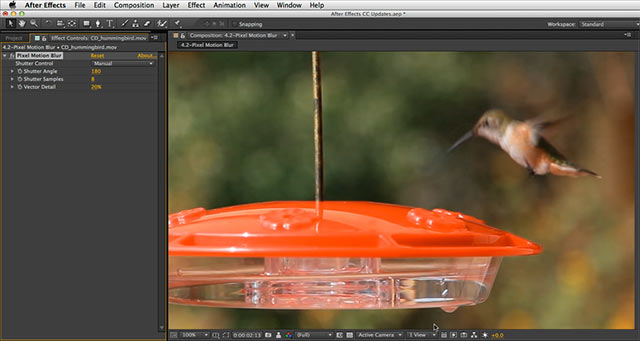 Not all of the updates coming in After Effects CC (Creative Cloud) are of the earth-shattering variety; some are simply better – or more convenient – mousetraps. After Effects guardian angel Todd Kopriva has posted an exhaustive list on the Adobe After Effects Technical Focus blog; one that we’d like to single out and share some training on is the Pixel Motion Blur effect.

A common problem with many 3D renders, or footage shot with a too-fast shutter speed (folks who leave their cameras in “full auto” mode, we’re looking at you), is that fast motion exhibits strobing as objects jump from one location to another between frames.

Motion blur is a way to smooth over these problems. Preferably, you leave the shutter open long enough to capture a nice motion blur trail (good starting point: pick a shutter speed of 1 over twice the frame rate, such as 1/60 sec for 29.97 or 30 fps), or your 3D program is capable of rendering nice motion blur.

Failing that, there have been third-party effects that can simulate this blur after the fact. In After Effects CC, Adobe has stripped down the Timewarp effect to create a simple-to-use Pixel Motion Blur effect to perform this task. Here’s how to use it: