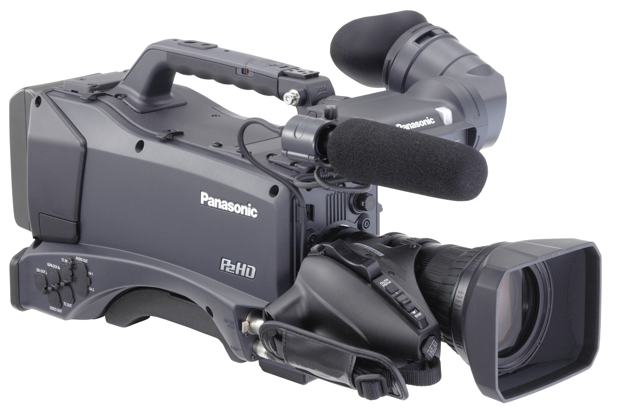 A week before NAB, Panasonic has announced the HPX370, an updated version of the barely-a-year-old HPX300. The 370 is a shoulder-mount, 1/3″ 3-CMOS true-HD camcorder listing for US$11,700 complete with 17x Fujinon zoom and color LCOS EVF. It records to dual P2 card slots on the operator’s side of the camera.

So what’s new? The big deal is the updated sensor: “a new state of the art U.L.T. (Ultra Luminance Technology) imager” with an on-chip 20-bit DSP. The ULT sensor uses newly developed photodiodes for increased sensitivity (Panasonic doesn’t directly say how much, but comparing spec sheets with the HPX300 it looks like a one-stop boost, based on the low-light values), and new low-noise output transistors for a “dramatically” lowered noise floor. The 370 also offers “Progressive Adaptive Processing”, a 2D/3D noise reduction technology to “enhance progressive sensitivity at the pixel level”. Panasonic didn’t have any technical details available when I spoke to them, but I might speculate about some spatial correlation detection (the 2D part) to allow pixel averaging in low-detail areas where noise is most apparent, and temporal correlation and averaging (the 3D part), similar to the 3D noise reduction Panasonic has long employed in many of their camcorders with considerable success. After all, that on-chip DSP has to have something to do… 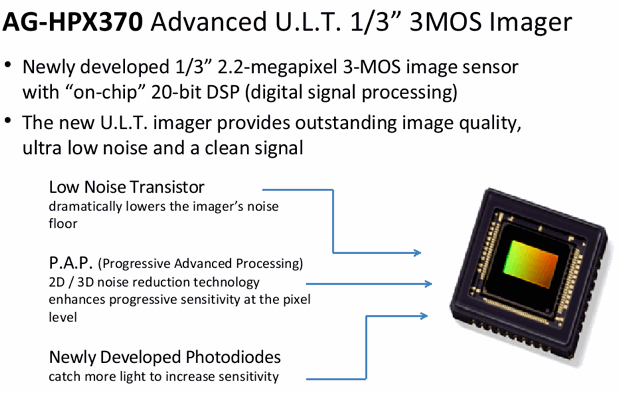 What else? Stuff that required firmware downloads or factory upgrades on the 300 is standard on the 370:

There’s also a new “one-clip record mode”, letting you consolidate up to 99 consecutively-recorded shots into a single clip. Panasonic suggest it’s useful for agglomerating lots of short, related shots in interviews or in wildlife photography; I think it’s a killer app for letting you conjoin info slates with takes when you can’t shoot them together in a single shot. (Panasonic says that one-clip record mode will be available as a downloadable upgrade for many of their other P2 cameras, too, though they couldn’t supply me with a list just yet.)

There’s also a bunch of stuff we’ve come to expect in Panasonic’s P2 camcorders: Chromatic Aberration Correction with certain lenses (including the stock lens, which is the same lens found on the 300), Dynamic Range Stretch in 60i and 60p modes, Variable Frame Rates from 12 – 60 fps in 720p (though 1080p is still limited to 24p, 24pa and 30p), AVC-Intra, DVCPROHD, DVCPRO50, DVCPRO, and DV recording—yes, this camera shoots 1080i and p, 720p, 576i and p, and 480i and p, all to P2 cards—and Panasonic’s typical selection of standard and cine-like gammas, including cine-like D for the most flexibility in post and cine-like V for some of the cleanest, most natural skintone highlights I’ve seen on video.

AVC-Intra, of course, is Panasonic’s 100 Mbit/sec intraframe format, offering full-raster, 10-bit, 4:2:2 recording (there’s also a 50 Mbit/sec variant with spatial subsampling). It is arguably the highest quality on-camera HD recording format short of HDCAM-SR, and it’s superb for chroma-keying and for anything that needs to be pushed around in post—and the HPX300 and HPX370 are the only affordable camcorders with it onboard.

The morals of the story are (a) that you can always set up test conditions that break one codec more badly than another codec, and (b) take anyone’s statement of codec superiority—including mine—with a grain of salt.

AVC-Intra was a bit difficult to deal with initially, but is now well integrated into most of the common post tools, video servers, etc.: Apple, Avid, GV (Edius), Quantel, Harris, Omneon, and Autodesk all support it natively, at least for ingest and editing, and both MainConcept and Rhozet offer AVC-Intra codecs and transcoding tools.

The HPX370 will be shown at NAB, and it’ll be shipping by NAB, too, so you might even find some show specials on it.

The 370 replaces the 300 in the Panasonic’s lineup, so if you’re cash-constrained and you snuffle around, you may be able to find some great deals on the HPX300: it may be superseded, but it’s still a fine camera, especially if you can get it on the cheap.

I was given a press briefing this morning on the HPX370, but aside from that, no material connection exists between me and Panasonic. Panasonic has not offered me any payment or other compensation to encourage favorable coverage.