Is the AW-HE2 a good candidate for cost-effective multicam progressive studios? Let’s find out…. 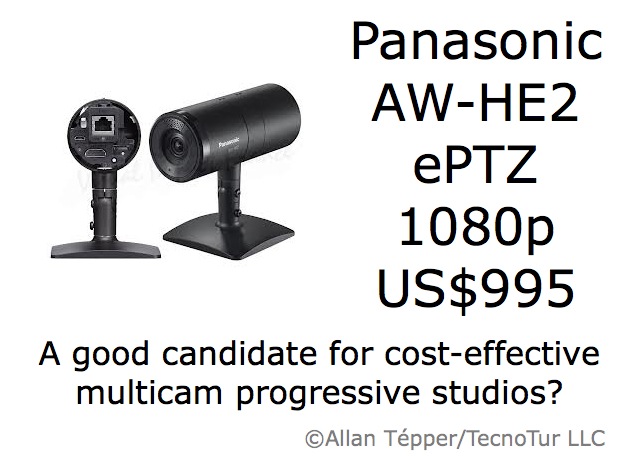 The US$995 AW-HE2 is not a camcorder (since it contains no recorder), but an intriguing camera with a live 1080p (or 720p) output at selectable framerates, together with extensive remote control capabilities via IP or infrared. Although in a completely different price and sensor size range, the AW-HE2 shares a similar feature with the Sony NEX-EA50 (which I covered in September 2012): the capability of zooming digitally, yet losslessly. Beyond zooming, the AW-HE2 can also pan and tilt using the same digital approach. Here’s a first look.

Many of our readers may be familiar with the term PTZ, which stands for Pan/Tilt/Zoom, which for decades has been used to describe certain security, teleconference, and video production cameras. What is fairly new now is the —e— prefix, which stands for electronic. Unlike traditional PTZ cameras, which use an optical zoom and a motorized base, ePTZ cameras do everything electronically, without any moving parts (or associated sounds).

The AW-HE2 uses a 1/4.37 sensor that Panasonic calls Full-HD MOS, with a stated spatial resolution of 3.9 megapixels. Panasonic says that with this resolution in the sensor, the AW-HE2 is able to achieve approximately 2x iA zoom losslessly, with separate digital zoom of 4x, although this 4x zoom would be lossy in 1080p mode. Among the subjective tests I plan to make with the AW-HE2 is to determine how much aliasing is visible when using the lossless iA (2x) mode, given that Sony prefers to have more oversampling and therefore uses a 16.7 megapixel sensor to achieve lossless 2x digital zoom at 1080p in their NEX-EA50, which I covered back in September 2012 in the article (Sony’s NEX-EA50 lets you zoom through prime lenses, losslessly).

The AW-HE2 offers both HDMI output (for full raster at whatever selected framerate and spatial resolution is selected) and an Ethernet port, which allows both controlling several of the camera’s functions remotely while monitoring it, although at either 640×480 (640×360 in 16:9) or 320×240 (320×180 in 16:9), up to 29.97 fps. Panasonic states that over IP, 16:9 video is transmitted in letterbox format, which surprised me. I’ll confirm that for the actual review I’ll be doing soon.

The original press release for the AW-HE2 states that: “Video output formats via HDMI include 1080/60p/50p/59.94i/50i/30p/25p and 720/60p/50p, with stereo audio”. (Yes, the AW-HE2 also has a built-in stereo microphone.) Some of the Panasonic websites neglect to mention “30p” (they likely meant 29.97p) and 25p. I suspect that the confusion is because the camera likely outputs those framerates as PsF over HDMI. If that is the case, it is easily remedied (when desired) using the US$299 Átomos H2S, which I’ll be testing together with the AW-HE2, since the H2S converts HDMI to HD-SDI, and can also remove pulldown (i.e. convert to pure progressive) when appropriate.

Is the AW-HE2 segregated or worldcam?

There are at least two variants of the AW-HE2: the AW-HE2P (sold in the US) and the AW-HE2E (sold in Europe). It is not clear whether both versions are worldcam or not, but I’ll be verifying that very soon as I test the review unit I received.