Art can be hard to understand. But what if you could step inside a painting and lay on the artist’s bed, staring at the images she sees as she drifts off to sleep? Painting Life opens that door for you. 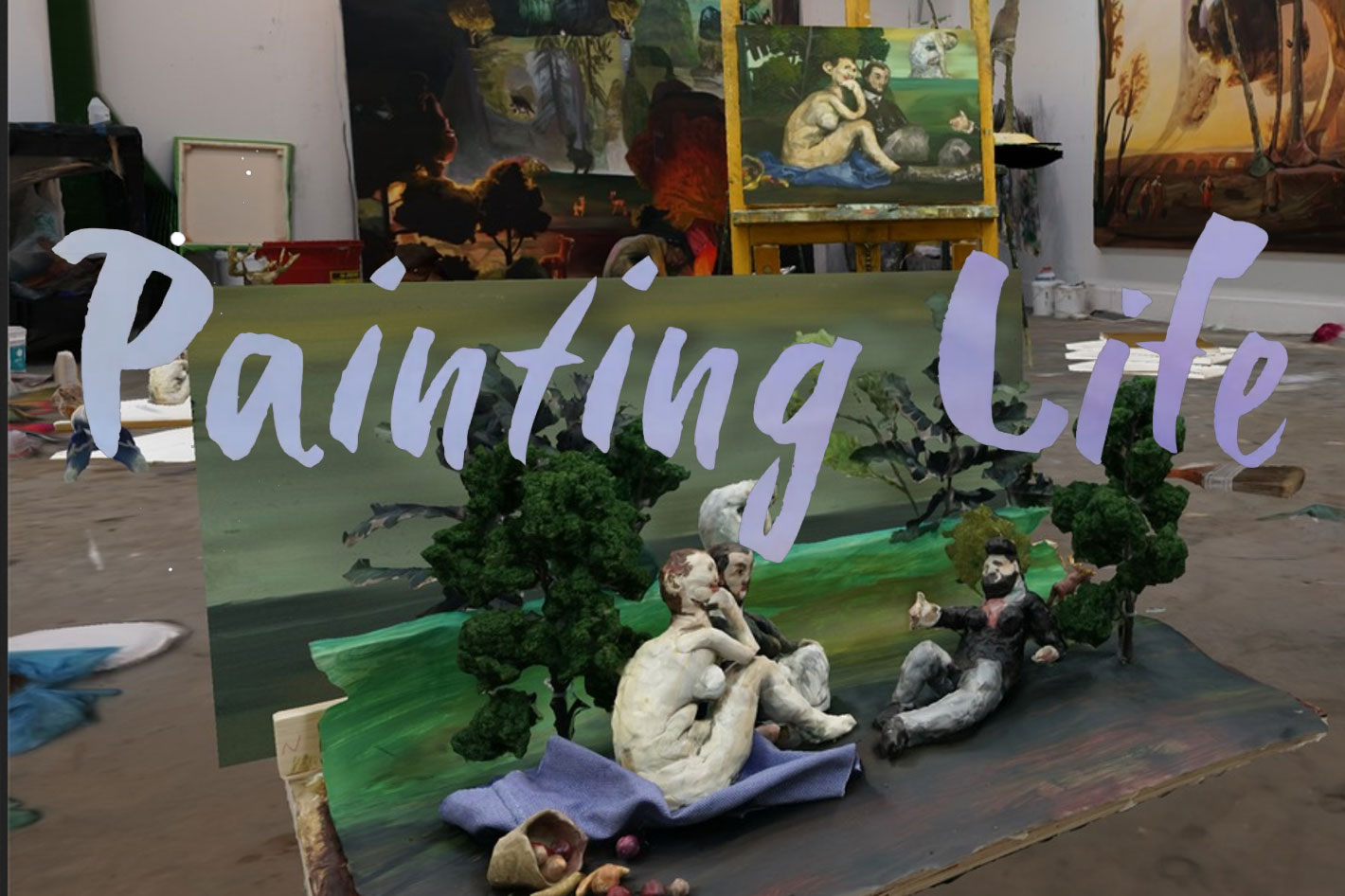 When Wyatt Roy visited Emma Webster’s first gallery exhibition, he imagined what would happen if all the paintings could come alive. That’s how Painting Life, the VR experience, came… to life!

Emma Webster is a Californian painter with an MFA in Painting from Yale School of Art (2018) and BA in Art Practice from Stanford University (2011). Wyatt Roy is a narrative designer – his words – with a BA Psychology with Honors from Stanford University… and he loves Virtual Reality. Emma and Wyatt are friends, and that’s how the story of Painting Life begins. 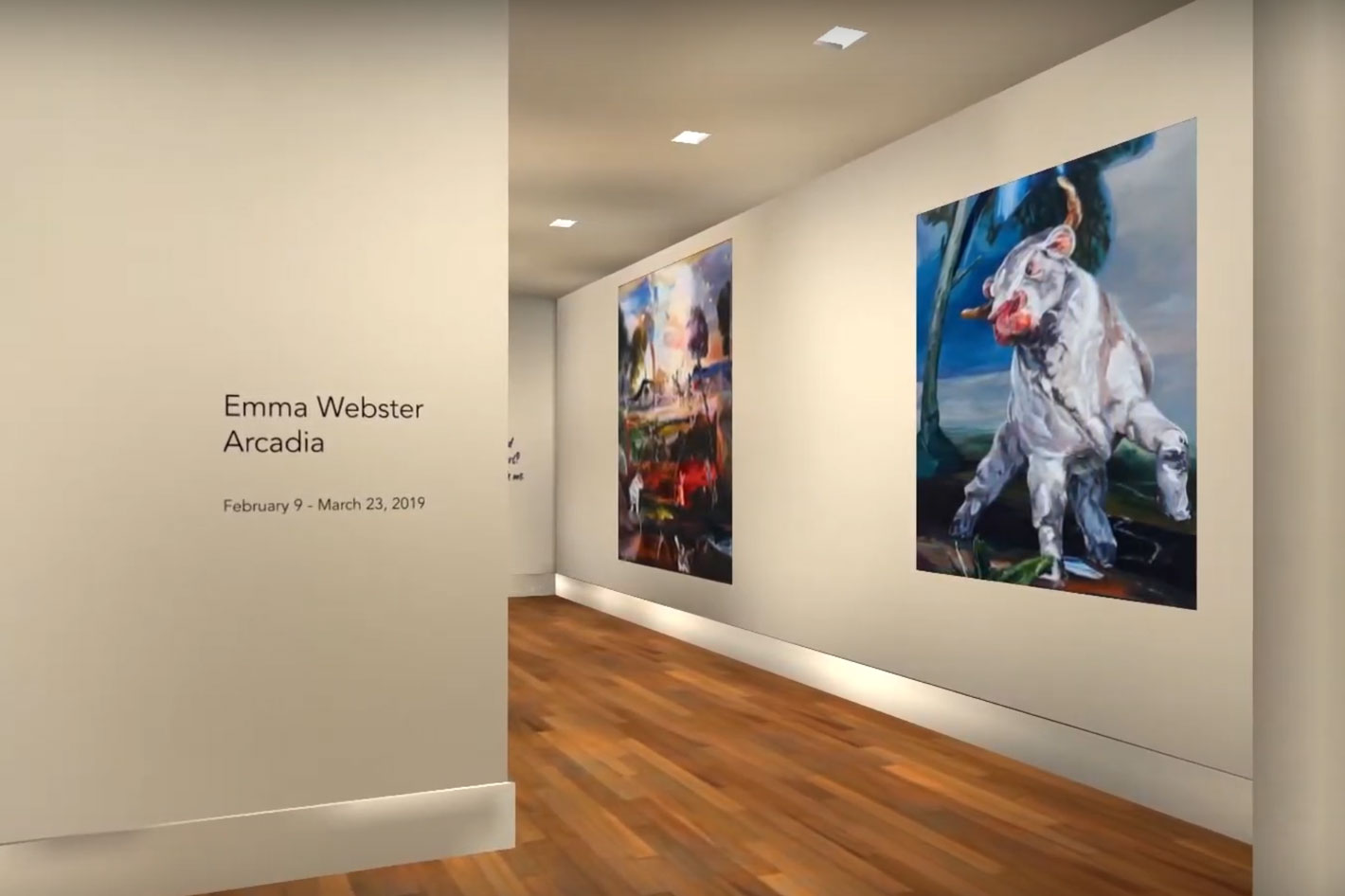 Wyatt Roy remembers well when he visited Emma’s exhibit at the Yale Art Gallery, how he felt about the experience. “Galleries aren’t known for being lively, but the utter stillness in this one was uncanny. Low hum of AC, no other people. Emma’s giant colorful paintings, dripping with life, seemed from a different realm. I thought to myself, ‘There has to be another way to interact with art.’”

The narrative designer was visiting his friend Emma Webster, a contemporary artist who was just about to graduate from her MFA program at Yale School of Painting. Her thesis works were up in the Yale Art Gallery – “big, emotional, paintings that were abstract yet based in something tangible” he recalls. “I felt like I could reach into them, and I couldn’t figure out how she did it. So we went to her studio. It was a big concrete box with a splatter-painted floor, canvases akimbo, and dioramas everywhere. I realized that she painted from life — a distorted, whimsical abstraction of life. Her paintings suddenly made sense, and felt even more lively than before.” 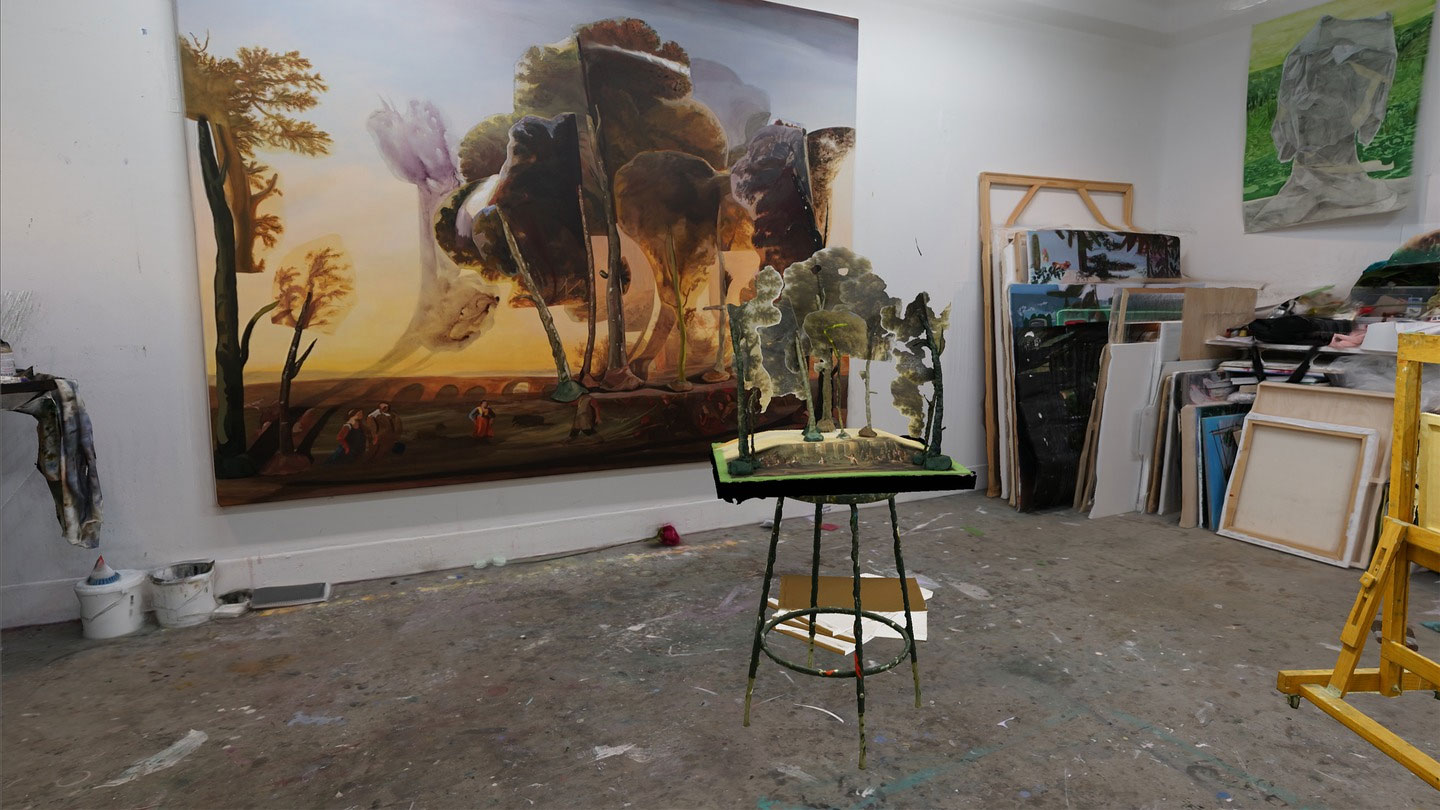 Wyatt Roy is a co-founder Maku XR, a San Francisco-based creative production company that crafts thoughtful film and photography for people who care about something. With Luis Zanforlin, the other co-founder, the team helps “translate our client’s stories into effective and moving visual media to inspire change in their audience” adding that “we sprint and crank and leap to weave a narrative that’ll take just a few minutes to watch but a while to forget.” 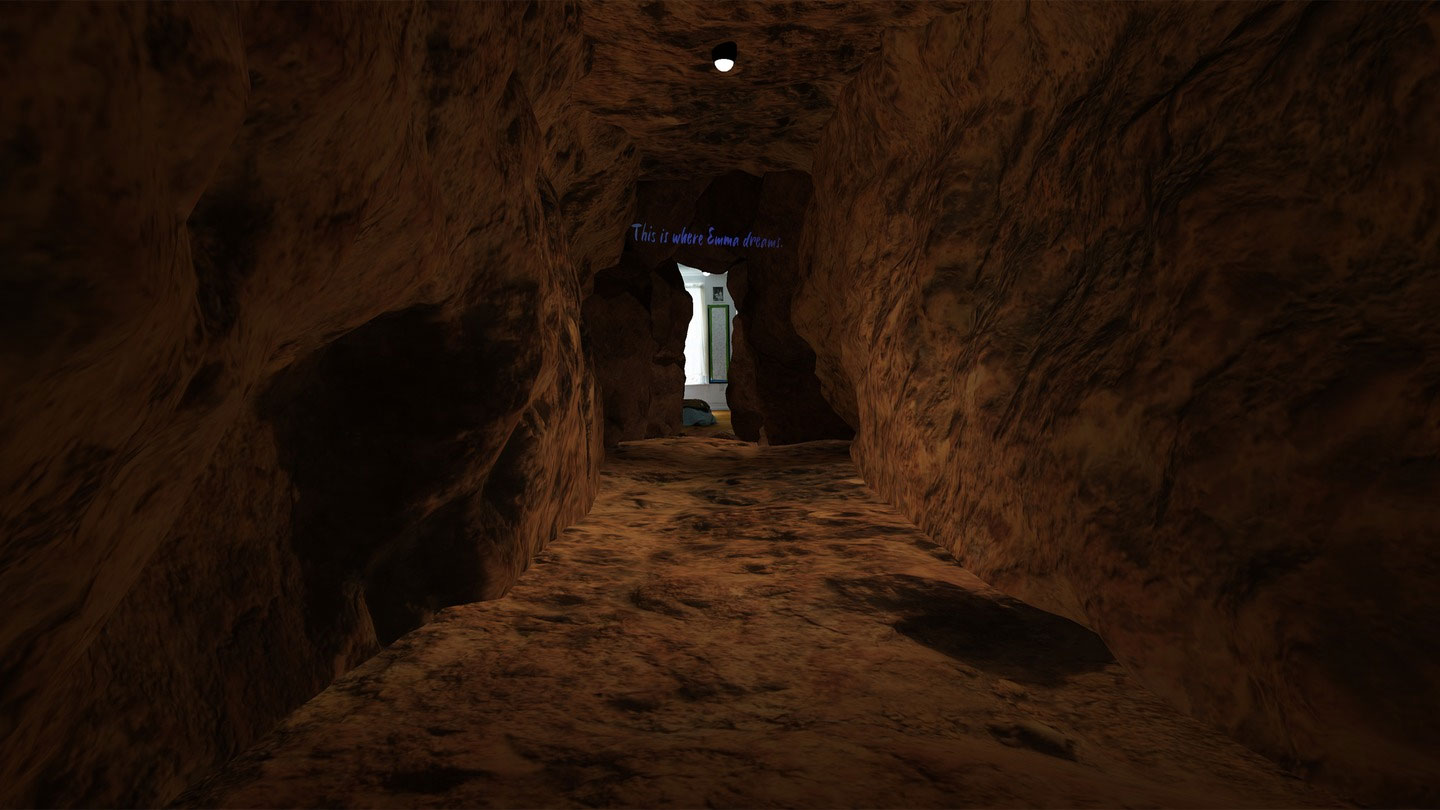 Painting Life shows Maku’s philosophy at work and it’s a VR experience that you will never forget. But before we continue let me share with you a bit more about Wyatt Roy’s story, because it is important to understand how the VR experience Painting Life was born. The storyteller says that “when I showed my grandmother my first virtual reality piece, I didn’t know what she’d say. I watched her looking around in the headset, making a small “oh!” when she noticed a woman walking into the scene, or a “hmpf” when she disagreed with a line of dialogue.”

He was blown away with her reaction when she took the headset off and simply said “It’s a good movie Wyatt, but I hate the protagonist.” All the technology, production, and cumbersome gear had melted away, and what his grandmother mentioned was the story. “She didn’t happen to think this particular story’s characters were very lovable, but her emotional reaction told me I was onto something. If we can use psychology to nudge people towards better behaviors, if we can craft narratives in new mediums that learn, grow, and develop with the viewer, and if we can build new technology that powers it — the world may be a much kinder, equitable, sustainable place.”

Virtual Reality could hold a key

That mindset is the base for the Painting Life project. After visiting the gallery and Emma Websters’ studio, Wyatt Roy had the chance to spend the night at Emma’s room, has she stayed with her boyfriend. He recalls that “her simple act of hosting me in her home changed the way I think about art forever. As I was falling asleep, I looked up at the pictures on her walls. Suddenly I noticed echoes of her paintings. I recognized certain features — eyes, postures, foliage — that had made their way into clay models. Moods and ideas that had buzzed around her head as she drifted off to sleep now swirled around mine.”

On his notes about the experience that led to Painting Life, he added “I realized that by going from the gallery to her studio to her bedroom I had done more than just change spaces, I’d stepped deeper and deeper into her mind. Her paintings danced inside me: they had backstories that I now knew! I was watching her art be freed of its frame, and seeing the humanity of its creator shine through. I wanted to figure out a way to share this epiphany with others. How could I let you into her work, into her world?”

He knew VR could hold a key, but it wasn’t clear how.  A month later, when Wyatt Roy went to a workshop at MIT on photogrammetry, which uses photos to make 3D models of objects, he discovered how it could be done. He remembers saying: “So the tools existed, I just had to learn them. I called Emma, asking if she’d be keen to collaborate on a weird and intimate VR “spatial story”. She said it would be no problem to have her entire life scanned. Two years later, it’s launched and publicly available on the Oculus Store!” 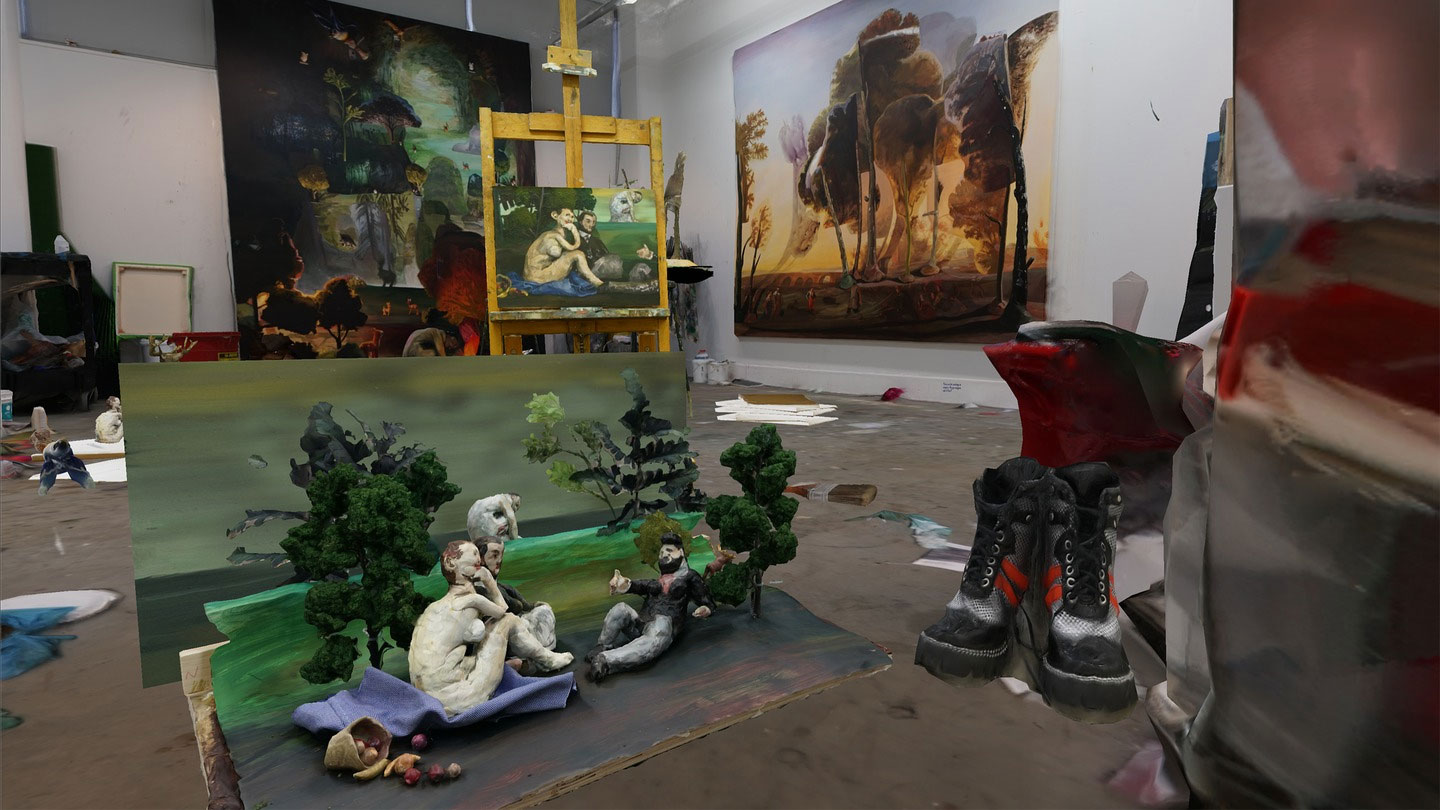 Painting Life was launched on May 2020, only for Oculus Rift and Quest – and only at the Oculus Store -, which is a pity, because it’s the type of content that should be available for all VR platforms, as a good example of how artists can use Virtual Reality to share their work. In this case Emma Webster’s paintings. Painting Life is an exploratory story based on real life. Using photogrammetry and binaural audio, the developers captured a moment in time for Emma Webster, a rising American artist.

In Painting Life the user starts in the art gallery where she hosted her first solo show after graduating from Yale Painting School with an MFA in 2017. One of her paintings shifts as you look at it — and you can jump into it. Once inside, you find yourself in Emma’s studio, now six inches tall. One of Emma’s sculptures, a clay figurine called Noodle-Arm, guides you through the story as you go deeper into Emma’s spaces, her process, and her mind. 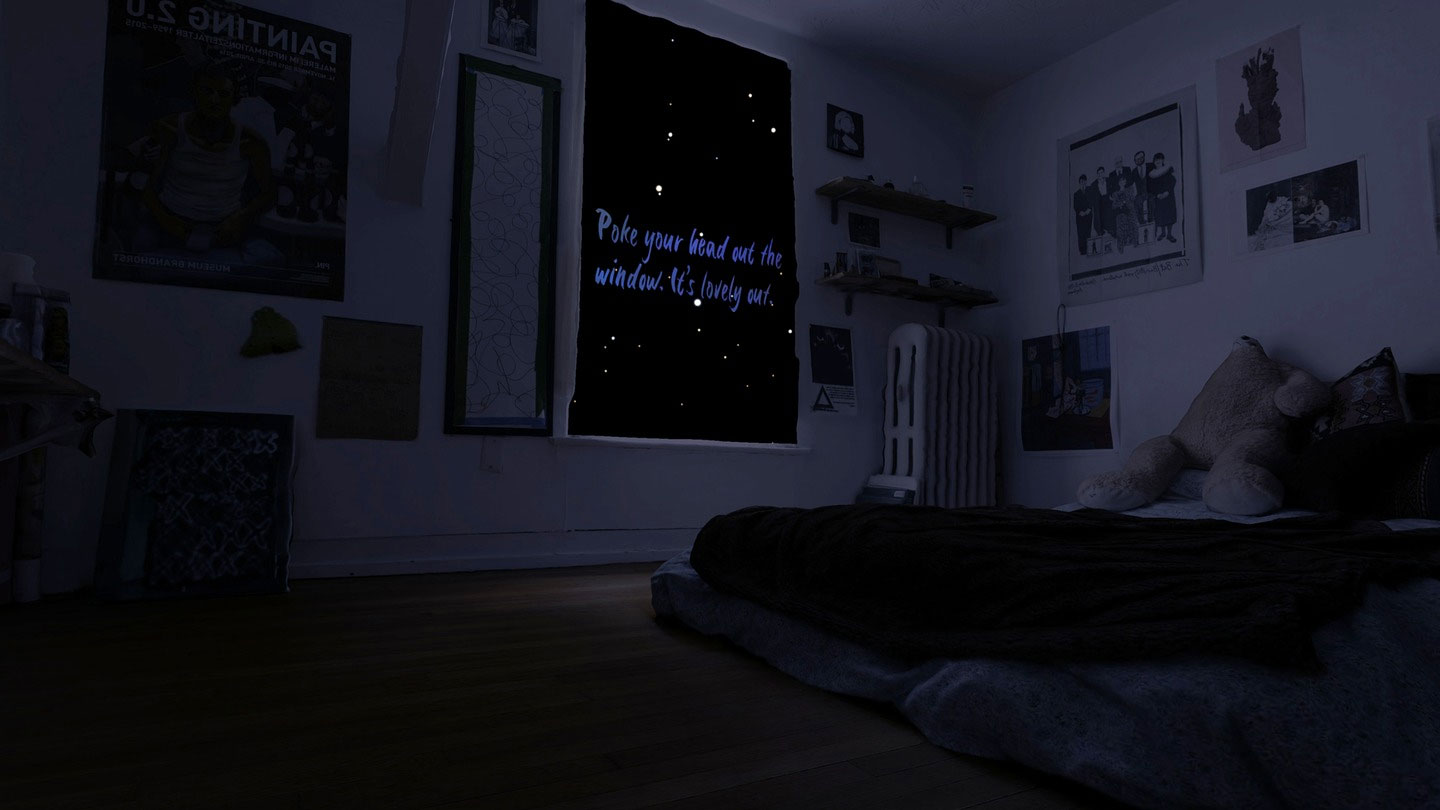 Painting Life is an adventure of discovery that feels a little bit like Alice in Wonderland. It’s an interactive experience, where you can not only go around and inside the paintings, but you also need to discover ways to climb onto platforms that, due to your small size, turn into gigantic obstacles. It’s, from my point of view, one of the most interesting modern experiences in Virtual Reality and one you should add to your library, along with the previous titles suggested here at ProVideo Coalition, from The Scream to Dreams of Dalí or Claude Monet, The Water Lily Obsession documentary.