Announced at the recent Oculus Connect 6, the improved Oculus TV is one of the solutions found by Oculus to maximize content distribution. The other is the new Oculus Media Studio. 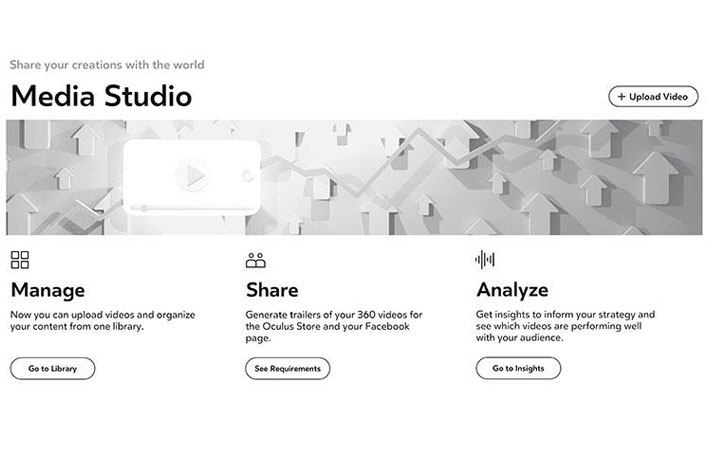 Creators of Virtual Reality content have different needs than creators of other content, including 360 video, so Oculus created the Oculus Media Studio, to help creators share their stories with the world.

There is a growing number of content creators around the world who are  creating incredible immersive content to build communities and share stories. However, while some may think that immersive content means everything from 180 to Virtual Reality, Oculus has been aware, for a while, through feedback from creators, that sharing content to experience in a VR headset is quite different than sharing 360 content to view in a social feed.

According to Oculus, “immersive creators want support for their VR-native content”, so the company announced that “we’re committed to helping them on their journey to engage their community and tell their stories”. As part of that commitment,  Oculus announced, during Oculus Connect 6, held this month, “ a new tool to help creators share their stories with the world: Oculus Media Studio, an immersive media management tool for uploading, publishing, and analyzing VR-first content. uploading, publishing, and analyzing VR-first content.” 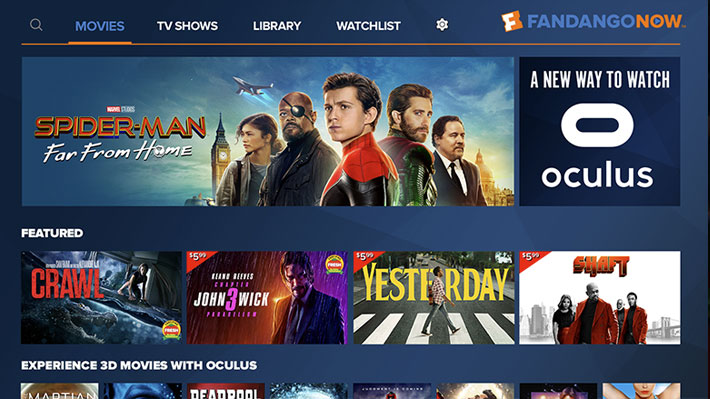 The Oculus Media Studio was not the only announcement made by Oculus, and it is important to also look at another product announced, the new and improved Oculus TV.  After revealing that people have spent $100M USD on the Oculus Store, “and 20% of that is from Quest alone — which is a testament to the health of the ecosystem, as well as the passion and commitment of the developers and content creators designing and building for VR today”, the company added that “VR is a great way to explore your favorite content and discover hidden gems—from the latest blockbuster movies to small, indie 360° projects and everything in between. And with more and more content coming to the Oculus Store every day, it can be hard to find exactly what to watch.” So, the new Oculus TV is born!

Oculus TV is a central hub where you can discover and watch media on both Oculus Quest and Oculus Go, giving creators a unique platform to help people find and enjoy the experiences they’ve made. Presented as the ultimate living room, inside Oculus TV, you’ll find content of all kinds to enjoy, from your favorite media apps like Amazon Prime VR, or Fandango’s streaming service, FandangoNOW—which is available immediately for Oculus Quest and Oculus Go. You can also check out unique immersive experiences like Emmy-nominated documentary Traveling While Black. 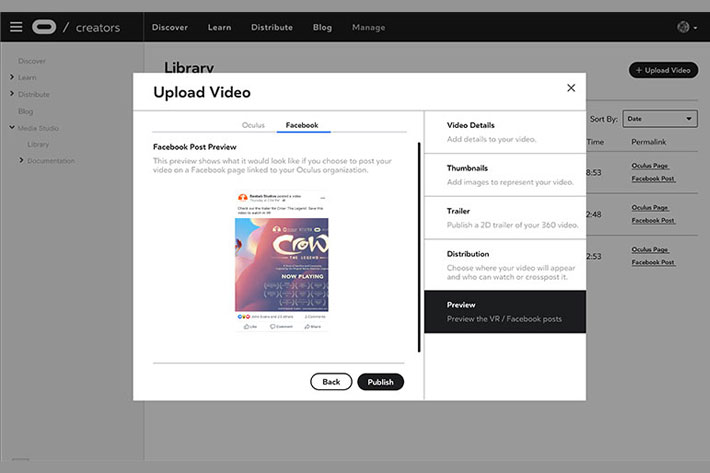 Oculus says that “just like your living room is the perfect place to spend time with friends, family, and your favorite entertainment, Oculus TV is a digital space where you can hang out in small groups, kick back, and watch your favorite content on a 180-inch screen. You can even enjoy your own personal photos and videos, plus popular 360° videos from top creators.”

While Oculus TV will serve both the audiences and creators, there is a product designed with creators in mind, the Oculus Media Studio—a new set of tools that make it simple for creators to upload, publish, and analyze their immersive content. With the Media Studio creators get an all new, easy-to-use dashboard to upload and manage their immersive media library within a single hub. In a few easy steps, their immersive content will be up on the Oculus ecosystem and viewable in VR. They won’t need to go through hoops to publish to VR, or take the time to create a new app for the Oculus Store.

The Media Studio upload flow is designed specifically for VR media. It ensures video quality by automatically reviewing content with ready-for-VR minimum specs. For VR studios who work collaboratively on media, uploading as “Saved As Draft” will allow only other people in your Oculus Organization to preview and review the content in headset. 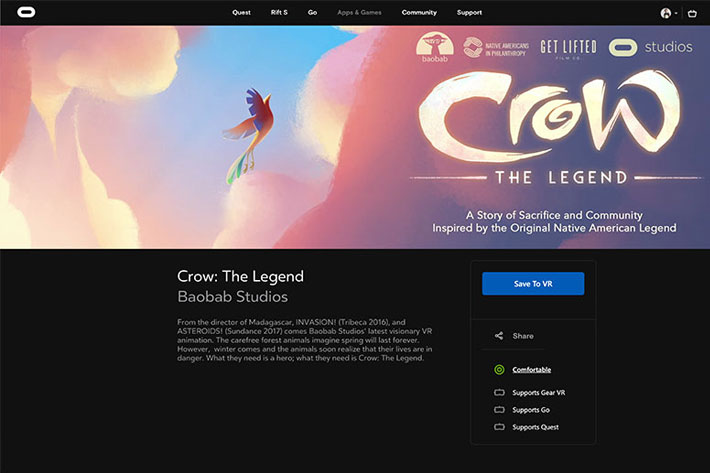 Jonathan Bach, Director of Product, Baobab Studios, authors of titles as Crow, says that “the ingest, preview and publish flow is efficient, and the ability to preview drafts (both content and metadata) on platform before pushing live is a great sanity and quality check”. Bach also added that “the publishing flexibility Media Studio gives creators, combined with improved content surfacing, both in headset and on Facebook, should help 360 creators reach more users with much less effort than was previously possible.”

Oculus says that “distributing your content with Media Studio allows it to be surfaced in VR through the Explore Feed in Home, where Oculus Go, and soon Oculus Quest, users will be able to discover content ranked based on their interests. Coming later this year immersive content uploaded through Media Studio will be curated and surfaced in the updated Oculus TV.”

Despite the fact that the woirkflow is designed with VR in mind, Oculus introduced options to distribute promotional materials related to the content in 2D – like a 2D trailer sent directly to the creator’s Facebook News Feed – empowering immersive creators to share VR-first content in VR while providing their audience with methods of discovering content out of headset. 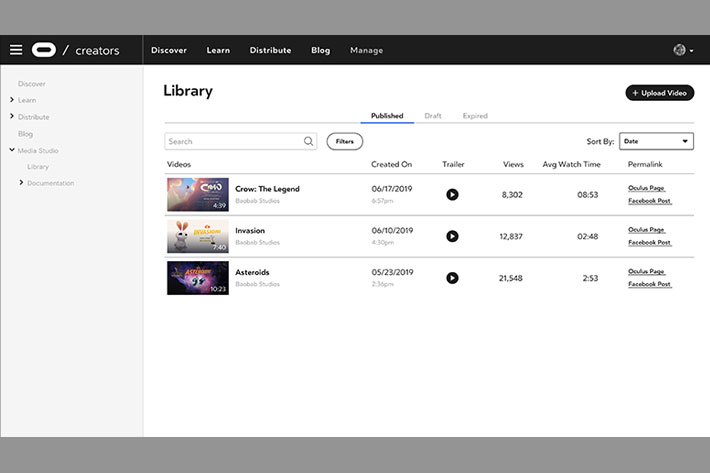 Being able to analyze the results is key for creators. In the past, there was nowhere to find insights to your content in its intended format. Now, says Oculus, creators can learn more about their VR audience and how they consume content with insights about in-headset time spent and in-headset views. Additionally, , the company adds, “we’ve surfaced both in-headset views next to Facebook News Feed views to consolidate your metrics in the Media Studio dashboard.”

Victor Agulhon, TARGO’s CEO, says that “as a media company, it’s central to have analytics on our creations. Having access to the average viewing time is the most insightful: it helps us identify usage pattern and iterate on the way we tell VR stories, what works, what doesn’t. In the end, it helps us make better VR experiences that audiences love.”

Oculus states that “this is the first of many improvements we are launching for the immersive creator community. In the future, we plan not only to fine-tune the Media Studio toolkit, but also plan to roll out a new feature for composing VR-first profiles for creators build and enhance a dedicated VR audience.”