Traveling While Black, one of documentaries funded by the New Frontier Labs program from the Sundance Institute is now freely available for everyone to watch… in 360 and VR. 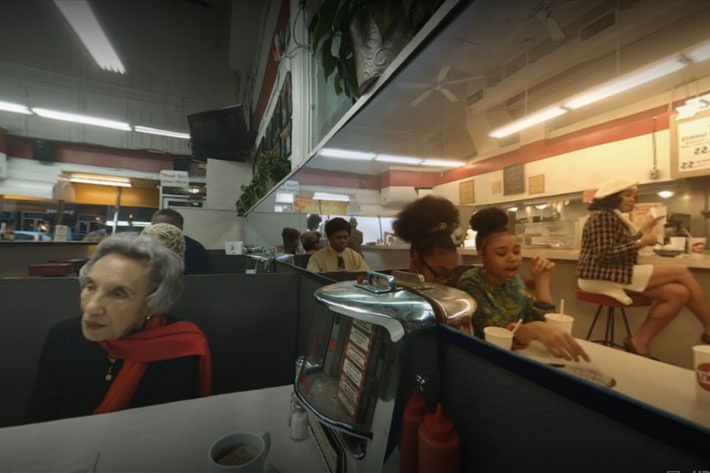 Premiered at Sundance, Traveling While Black, directed by Roger Ross Williams, is a documentary  that does more than tell a story, it immerses the viewer in the narrative, thanks to Virtual Reality.

Sundance Film Festival does suggest on the event’s website ways for people to follow the festival, which runs until February 3, from anywhere in the world, presenting tons of live video and editorial coverage of film premieres, panels, and music, as well as up-to-the-minute updates on Twitter, Instagram, and other social media. You can almost be present on some of the premieres, if not in flesh, through the power of modern technologies.

That’s exactly what happened with Traveling While Black, a documentary premiered at the Sundance Film Festival and made available this weekend on Oculus Rift and Go. The documentary is also the subject of a discussion panel that happens today, January 28, at the The Shop at Sundance Film Festival, 1167 Woodside Avenue, Park City, Utah. The doors open at 2.45 p.m. and the panel will run until 5.30 p.m., with Roger Ross Williams, who won an Academy Award for his short documentary “Music by Prudence”, in conversation with renowned author and Times journalist Brent Staples, a member of the Times editorial board, on the history behind the film, the issues it portrays and how VR shines a light on the topic. Oculus will provide VR headsets to view the film. 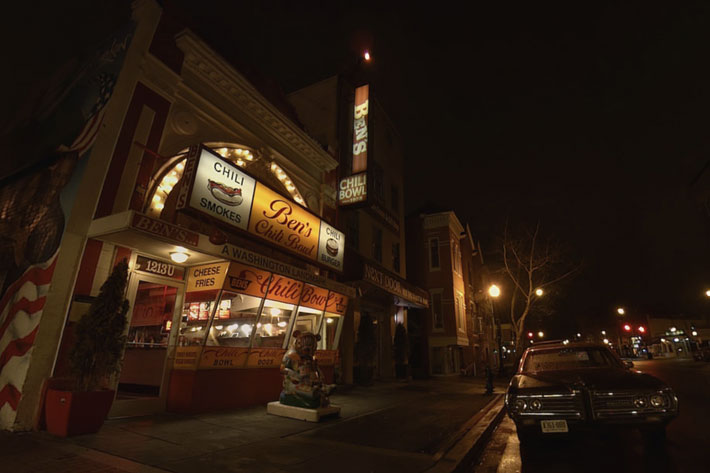 The VR version is more immersive

I had the chance to watch Traveling While Black on Oculus Rift this weekend, and decided it made complete sense to write about the experience, because this is another example of the potential of Virtual Reality to really immerse viewers in the narrative. Traveling While Black, directed by Academy Award winner Roger Ross Williams in collaboration with Félix Lajeunesse and Paul Raphaël and co-directed by Ayesha Nadarajah, is a 20-minute 3D, 360-degree virtual reality documentary that immerses viewers in African-Americans’ struggles to travel freely around the U.S., from restrictions in the pre-civil rights era to the challenges minorities face today.

Op-Docs, The New York Times Opinion section’s series of award-winning short documentaries, was also a producer on the piece. Traveling While Black represented the premiere of the 300th Op-Doc — a 360 version of the film is live on the Op-Docs site. There are also versions for Oculus Go and Oculus Rift headsets. Having seen both, I can tell you that the Oculus version really contributes to take you inside the narrative, more than any other. 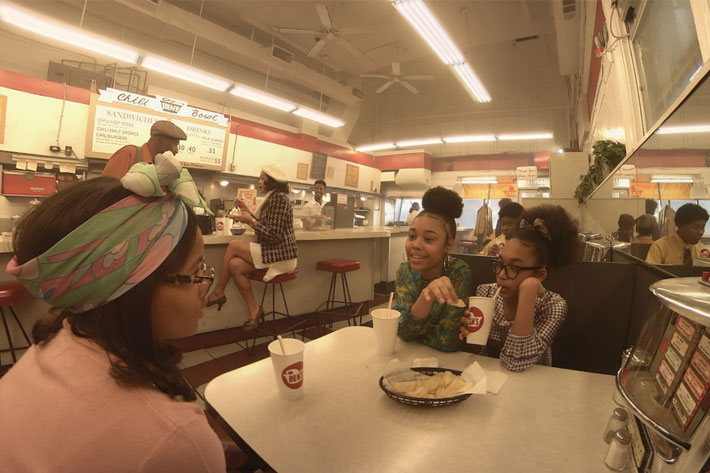 The documentary project started in 2010, when a play called The Green Book premiered at the Lincoln Theatre, next to Ben’s Chili Bowl in Washington, D.C. The play, produced by Bonnie Nelson Schwartz, told the story of Victor Green, creator of the Green Book, a guide for Black travelers during segregation. Ben’s Chili Bowl, is an iconic place in D.C. and a safe space for black people, so when Williams partnered with Nelson Schwartz to tell the story in a new media, it made sense to use it as background for the narrative.

A grant from the Sundance New Frontier program made VR not only an option but a path for better immersion and to make the story reach new audiences. It wasn’t an easy path, though, and Williams, who had no previous experience in VR, tried different approaches, until he saw the work from Felix & Paul Studios the Emmy-winning team behind “The People’s House”, the Obama White House documentary. The studio, responsible for some of the most groundbreaking original virtual reality, augmented reality and mixed reality experiences, ended developing Traveling While Black. 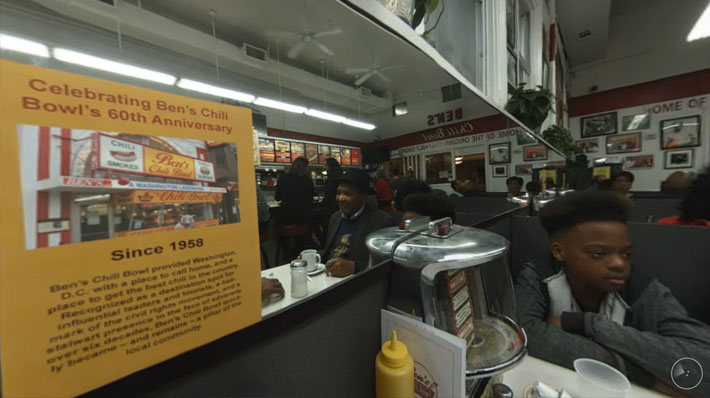 “Traveling While Black stands out as a timely, impactful look on the history and present tense reality of being black in America,” said Kathleen Lingo, editorial director for film & TV for The New York Times. “Op-Docs is honored to publish it as our 300th film that both has a strong point of view and uses the innovative storytelling space of VR to tackle such an important subject.”

While the film’s narrative is rooted in the past, VR is an ideal medium for experiencing this chapter in American history. There is no way to explain how VR transforms your experience of the narrative. You’re not just watching a documentary, you end sitting in a booth at Ben’s Chili Bowl, with the chance to listen to the stories and experiences of different people, from the restaurant’s owner Virginia Ali, to Samaria Rice, the mother of Tamir Rice, the unarmed 12-year-old who was shot by a Cleveland police officer in 2014. 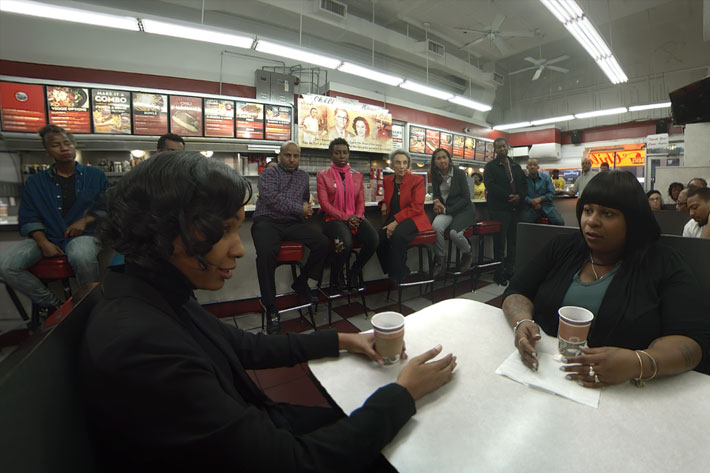 Experience the pain of the people

These intimate interviews take you back in time in a way that only Virtual Reality can do. If you’ve the chance to compare, see Traveling While Black in both versions: the 360 and the VR. You’ll end agreeing with Roger Ross Williams when he says “You can really experience the pain of the people talking to you and telling you their stories. You can see into their faces in a way that doesn’t let you look away. That’s something only VR can give you.”

On January 25, when the film was premiered, there was another discussion panel, presented by Oculus and Facebook. In the panel, moderated by Yelena Rachitsky, from Oculus, Roger Ross Williams, theatre director Tara Ahmadinejad (Piehole), and VR creators Sam Gorman (Tender Claws) and Félix Lajeunesse (Felix & Paul Studios) examined this convergence of forms that continues to elevate the craft of VR, and asked “what happens when a traditional documentary filmmaker and a theatre troupe dip their toes into VR for the first time?” and “how can classic forms of storytelling help make VR both meaningful and entertaining in ways traditional formats have perfected over centuries?”

We’re at crossroads in terms of VR, and examples as Traveling While Black point to viable paths. Not wanting to spoil the fun of discovering the documentary, let me tell you that strange things happen in the VR version of Ben’s Chili Bowl, and suddenly you’ve a view of the past reflected in the mirrors. Yes, it is also present in the 360 version, but it does not have the same effect, I can tell you. There is another aspect which makes the VR version more immersive: the 3D makes the illusion complete, as you’re not just watching a documentary – which you still are, in the 360 version: you’re there, at Ben’s Chili Bowl.

For a moment I felt tempted to grab the coffee mug on the table in front of me. In a world where 4K and 8K seem to be the next big thing, this short documentary goes in another direction. It may trade pixels for emotions, but the feeling of being there, part of the story, is so much more intense that you’ll probably shed a tear. That’s not a very good thing to happen when you’re wearing a head mounted display!