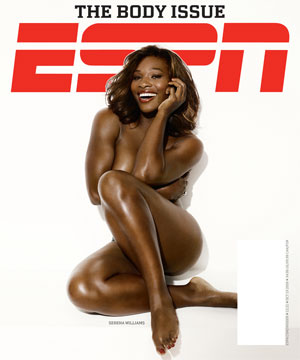 ESPN the Magazine recently published their “Body Issue” on October 19, 2009, celebrating the incredible bodies of some of our favorite athletes. The work was beautifully shot by several amazing shooters, including James White, Sarah H. Friedman, Patrik Giardino, Sheryl Nields, Olugbenro Ogunsemore, James Dimmock and others. The work is incredible, a truly stunning portfolio celebrating the beautiful form of the athletes we all admire.

The athletes are often nude or barely clothed, beautifully portrayed in either their particular sporting environment or sometimes simply on a white sweep. The lighting shows off their impressive physiques, shaped by the particular sport they are known for.

The November 2nd issue just arrived, and in it were letters and emails from readers. The responses ranged from “I enjoyed seeing so many athletes from so many different sports. I kept calling my husband in to look at the photos!” -Karen McCaslin, Collegeville, PA to “It is appalling that ESPN would degrade itself like this. Showing nude women, regardless of whether it is art, is still pornographic.” -Scott Butler, Provo, Utah

There were funny ones: “I have one complaint about the Body Issue: There were not nearly enough naked men. And where were the Tony Romo and the Manning Brothers?” and ridiculously sad ones: “There were at least 35 women baring more than necessary. I had to spend an hour making the magazine more appropriate for my husband to read.” -Stefani Francl, Vienna, VA

ESPN’s editors addressed them all, quoting the Supreme Court’s obscenity guidelines and touching on censorship, relationships, bodies and more, all with a good sense of humor.

It’s interesting to note what parts of the country the critical letters came from. But I know it’s not just regional. There are beliefs across the spectrum in large metropolitan areas like Los Angeles and New York. Proof that you can’t please all of the people, all of the time.

Similar letters pour in to the photo magazines if they ever feature swimsuits. Swimsuits are hardly nudity, but some folks will write in and cancel their subscriptions, claiming they don’t want to be subjected to “pornography”. If swimsuits and the human form shown in non-sexual form are pornography to you, it must be dark in that cave you live in. Stay away from beaches and Sports Illustrated in the Spring. Images like the ones in ESPN the Mag were so beautiful, I’d not mind my young daughter seeing them. There’s nothing titillating about them, they’re just celebrations of the human form and the hard work the athletes have put into them.