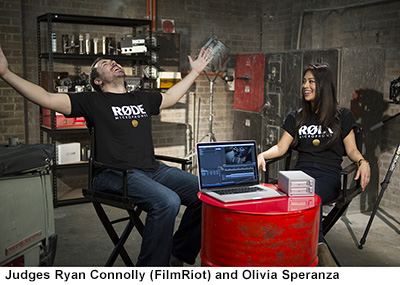 Entries for the ‘My RØDE Reel’ international film competition have just closed, with a staggering 1,076 films being submitted from 76 different countries. While the judging panel are busy viewing all the entries the public can have their say by watching and casting votes for their favourite films on www.myrodereel.com.

The short film contest hosted by RØDE Microphones has attracted more entries than fellow Australian icon Tropfest, which currently claims to be the world’s largest short film festival.
“I am absolutely stunned at the amount of entries we have received. Having watched a great deal of the films personally it is amazing to know that there are so many creative people out there using RØDE.” commented RØDE’s Global Marketing & Sales Director, Damien Wilson. “It certainly has been quite a humbling experience to see the shear talent and enthusiasm of the teams and individuals alike that created an entry.”

The international filmmaking community has clearly responded to the incredible prizes available, totaling more than US$80,000 and including BlackMagic and GoPro cameras, Carl Zeiss lenses, Miller tripods, RedRock Micro rigs, SmallHD and Teradek monitoring equipment, Kessler sliders and jibs, ThinkTank Photo bags, Event studio monitors, G-Technology storage, TetherTools accessories, F&V film lighting, software from Adobe and RedGiant, licensing credit from The Music Bed, and of course plenty of RØDE microphones. A full list of the prize packs is available on the competition website.
The prizes will be drawn weekly during June, with the smaller category prizes of ‘Best Soundtrack’, ‘Best Cinematography’, ‘Best Sound Design’, ‘Best Location’, ‘Best Non-English Film’ and ‘Best Documentary’ being announced Monday June 9. The award for best behind-the-scenes video is the first of the major prizes to be announced, on Monday June 16, followed by the judges’ prize for best overall film on June 18.

The final prize announcement is the ‘People’s Choice’ on June 23rd, which is decided by the general public internationally and is open to anyone to vote. To view entries and cast a vote, people are invited to visit myrodereel.com. From there visitors can browse entries by country, popularity, and even see the judges’ top picks.

Visit www.myrodereel.com now to watch the films and vote for your favourite entries.