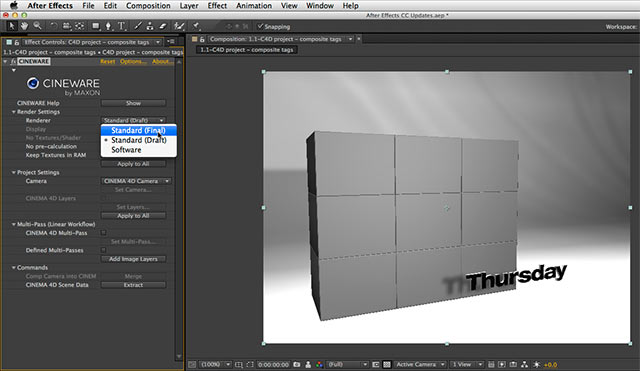 As we mentioned last Thursday, we wanted to share with you more about some of the significant new features in the Creative Cloud version of After Effects. The goal is to make you better informed about your upgrade decision before the June 17 release date.

We wrote a preview of After Effects CC for PVC when it was first announced; since then we’ve released a couple of hours of video training on all the major new features in After Effects CC. Adobe TV has also posted two movies from that course on C4D/AE integration, and we thought we’d share those with you.

As we noted in the preview referenced above, with After Effects CC you will be able to import a .C4D project file directly into After Effects, which will treat it as a footage item. Once you add this .C4D footage item to a composition, a new CINEWARE plug-in will automatically be added to that layer, which will render requested frames from the .C4D project on demand inside After Effects, without the need to render the whole project ahead of time in CINEMA. This process is laid out in the following movie:

The CINEWARE plug-in allows you to select which camera you want to use – one from the .C4D project, or one you create in After Effects – as well as move cameras between the two. There are also a lot of nice facilities for handling multipass renders (our favorite way of working) as well as isolating “layers” of multiple objects set up in CINEMA 4D. We’re excited to see what users do with this functionality, as well as how MAXON and Adobe may expand it in future Creative Cloud updates.