If there was any doubt, the introduction of two Cinema lenses by Fujifilm with its new “video-centric” X-H1 camera, confirms that the company has officially entered the fray. 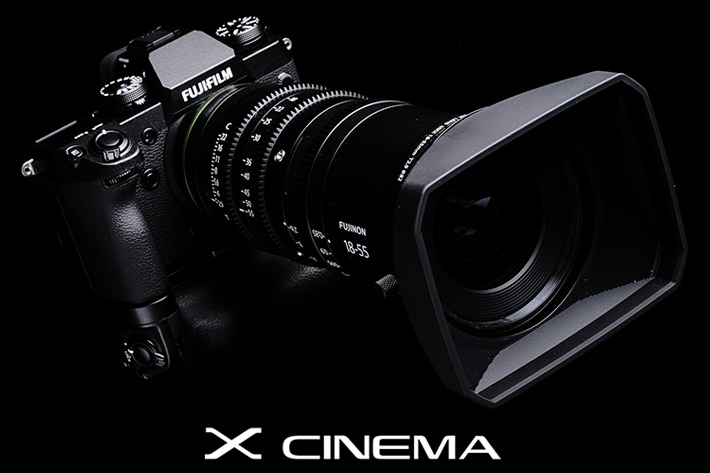 Available next June, the new lightweight cinema lenses for the X- series of mirrorless cameras cover the most frequent focal lengths in video production – 18 to 135mm – and offer a constant T2.9 aperture.

The FUJINON MKX18-55mmT2.9 and FUJINON MKX50-135mmT2.9 cinema lenses for X Mount, new additions to the X Series line of interchangeable lenses, are compatible with all Fujifilm X series interchangeable system cameras, but they “fit like a glove” the recently revealed X-H1, which represents the path Fujifilm intends to explore with their X Cinema family.

These new cinema lenses offer a lightweight and compact design with the same optical performance and operability as larger cinema lenses in their class. That’s an important element for Fujifilm, as the lenses are presented as respecting their heritage, the FUJINON name that everyone in cinema and broadcast industry recognizes. Fujifilm seems decided to take the same concept and quality to the APS-C size sensor, through the X Cinema products. 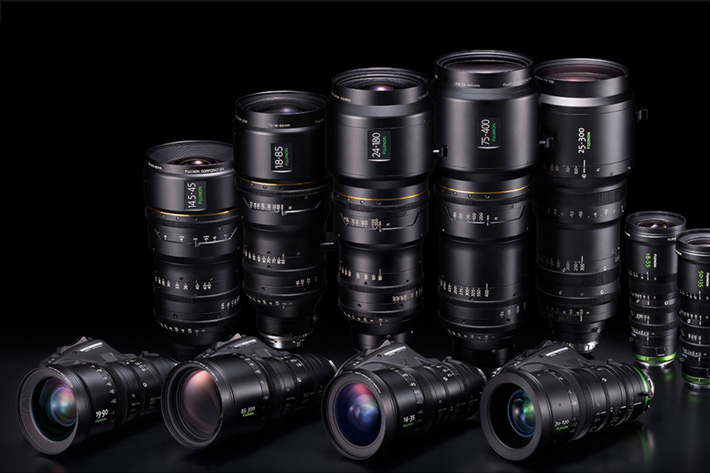 FUJINON’s first broadcast lens introduced by the company in 1964, under the spirit of “Lens with high resolution and definition”, marks the start of a story that sees the brand widely used from everything from documentary to sports broadcast. In 1983, broadcast lens with 44x magnification ratio, highest ratio at the time, was introduced. In 2015 world’s first 4K broadcast zoom lens was introduced. Fujifilm has been honored with Emmy awards three times for their products. The award is presented by The Academy of Motion Picture Arts and Sciences to an individual and companies whose discoveries and innovations have contributed in significant and lasting ways to motion pictures.

In 2001, Fujifilm entered the cinema lens market and in 2008, Fujifilm introduced cinema lens for “Super 35mm”, which is a standard format for cinema industry. By 2016, the lens lineup had expanded to 9 zoom lenses ranging from the Premier “HK Series” to Cabrio “ZK Series” and “XK Series” with high operability.  One important aspect to consider: although prime lenses are primarily used to shoot cinema, the technologies that were nurtured by the company through broadcast lenses allowed their lens performance to be comparable to that of prime lenses. FUJINON cine lenses are widely used for movies, commercials, and TV dramas. In 2017, FUJINON cine lenses also received the Emmy awards.

In the same year, “MK Series” was introduced, which is compatible with E-mount, developed by Sony. It inherits the features of HK, ZK, and XK Series, and packed them all into small and lightweight body. The MK Series targeted cinematographers who despite a limited budget did not want to compromise on image quality. The first lenses weighing less than 1 Kg were presented. Although a little over 1Kg – a total of 1080g excluding excluding caps, hoods, support foot, tripod collar foot – the new lenses, MKX, are still aimed at the same professionals. 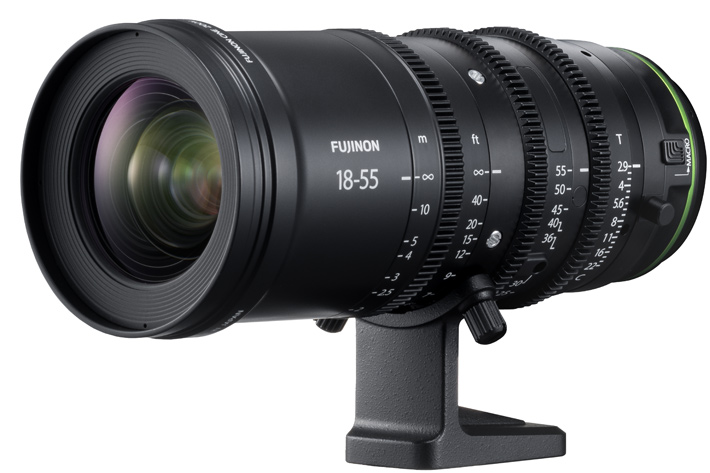 The need for affordable and lightweight lenses

With an enhanced optical and mechanical design, the MKX18-55mm and MKX50-135mm suppress focus shifts while zooming and reduce lens breathing, ensuring continuous sharp output, says Fujifilm. In line with the optical performance of the XF16-55mm and XF50-140mm lenses, these new MKX lenses offer a range of features that enable ease-of-use for capture in a wide array of shooting situations.

“The growth of video production has created a large demand among videographers and cinematographers for compact and easy-to-use lenses,” said Yuji Igarashi, General Manager of the Electronic Imaging Division & Optical Devices Division at FUJIFILM North America Corporation. “In keeping with our commitment to deliver innovative products and solutions, Fujifilm has recognized this need and has introduced the MKX18-55mm and MKX50-135mm lenses, offering a lightweight design and affordable price point, while delivering great optical performance and operability as other professional cinema lenses.”

According to Fujifilm, the MKX18-55mm and MKX50-135mm are lightweight and compact, and achieve advanced optical performance utilizing the short flange focal distance of X mount, making them ideal for small budget productions, where is paramount to have a reduced number of people needed for the shooting process. In addition, adds the company, the lenses offer advanced optical performance across the entire zoom range. Achieving T2.9 aperture, they facilitate the bokeh effect with shallow depth-of-field eliminating the need to readjust lighting. Combined, continues the infor available, “these features not only lead to beautiful videos, but also shorten shooting time, making the MKX lenses a very economical choice for movie production. Further adding to its superior output, contact with an X Series camera corrects distortion, color, brightness and achieves Fujifilm’s various Film Simulation modes.” 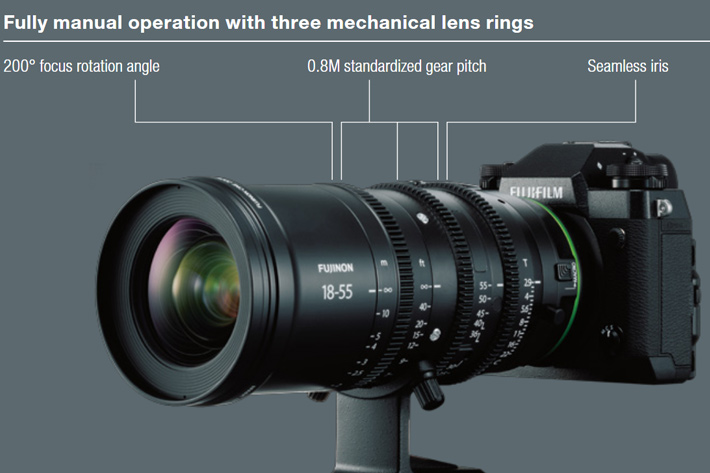 The optical and mechanical approach employed in these new MKX lenses allows for elimination of time lag that is usually experienced with electrical control systems. Manufacturing technology developed for conventional FUJINON cinema lenses was applied to control the optical axis shift while zooming. The front inner-focusing system controls lens breathing, allowing for smooth focus over an entire scene. Additionally, when zooming, focus shift is suppressed by independently driving the front focusing group and zooming group of lens elements away from each other.

The MKX18-55mm and MKX50-135mm feature three fully manual rings for independent adjustment of focus, zoom and aperture, allowing for intuitive operation. The focus ring offers a rotation of a full 200 degrees to facilitate precise focusing even when shooting with a shallow depth-of-field where a high degree of precision is required. Further, all operation rings have a gear pitch of 0.8 m, allowing the use of all standard third party accessories for video production. With an iris that supports seamless adjustment, precise and silent exposure is achieved while preventing camera shake caused by clicking, making these lenses perfect for a wide array of shooting situations.

Adding to their high quality video production, these MKX lenses are designed for ease-of-use. The gears for all three rings are positioned in the same place eliminating the need to re-position accessories when switching lenses. Only one matte box with an 85mm front diameter and one filter size with a filter thread of 82mm are needed between the two lenses. Equipped with a macro function that allows shooting close-ups to broaden the range of scenes that can be covered with one lens, optimum performance is achieved. 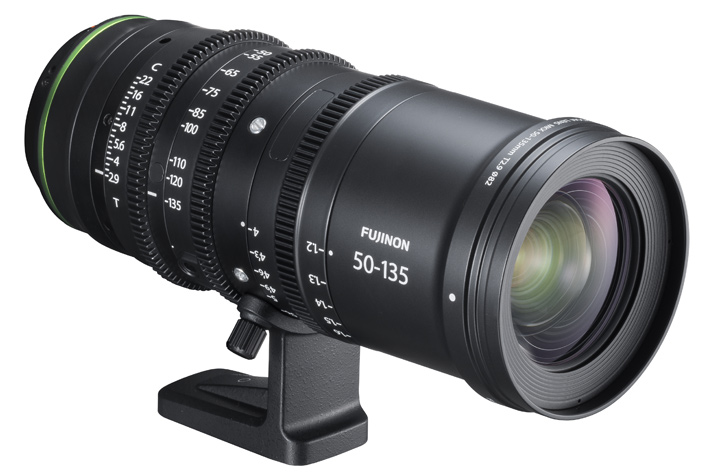