I’ve been getting some play time with RED’s new Weapon camera with a Monstro sensor at Videofax in San Francisco. Jim Rolin, one of Videofax’s owners and a top video engineer, said something during my previous visit that got me to thinking. He said he’d put some older glass on Monstro to see what happened, and the results were fascinating. I’m a big fan of TLS-rehoused Cooke Speed Panchros and the new Cooke Classics, so I decided to take a look and see what strangeness I could squeeze out of otherwise normal lenses by using as much of their image circle as possible.

I also decided to try and quantify the “full frame” large format look that has fascinated me since I was a kid. More on that here.

We tested a number of lenses, but I’m going to focus on one type here: Zeiss Ultra Primes. They shouldn’t cover Monstro’s full 8K frame, but some of them—the longer focal lengths—do. And the wider focal lengths will cover 5.5K, while showing some really interesting stuff around the edges.

Visual effects companies often ask us to shoot lens mapping charts, prior to capturing background plates into which virtual characters will be placed. All lenses introduce distortion, so by shooting a lens reference chart, consisting of a fine checkerboard pattern, these distortions become visible. It’s then possible to add those distortions when placing the digital character into the scene, so as to make the composite appear more realistic. Most of these charts are huge because it’s important to fill the frame at the distance at which the character appears, as optical distortions change with focus distance. In my case, I just wanted a rough idea of what each lens did, so I compromised by buying the closest thing I could find to a lens mapping chart—a cutting matte from a craft store—and shot it at a distance of about 2’ from the camera.

The distortions I see here may not be as apparent at a more “normal” focus distance of 6-10’, as lenses tend to be optimized for specific distances depending on the focal length. Still, the bowing I see here is typical of what I see in Ultra Primes during normal use. I quite like it. (Flat, perfect lenses can be a bit boring.) 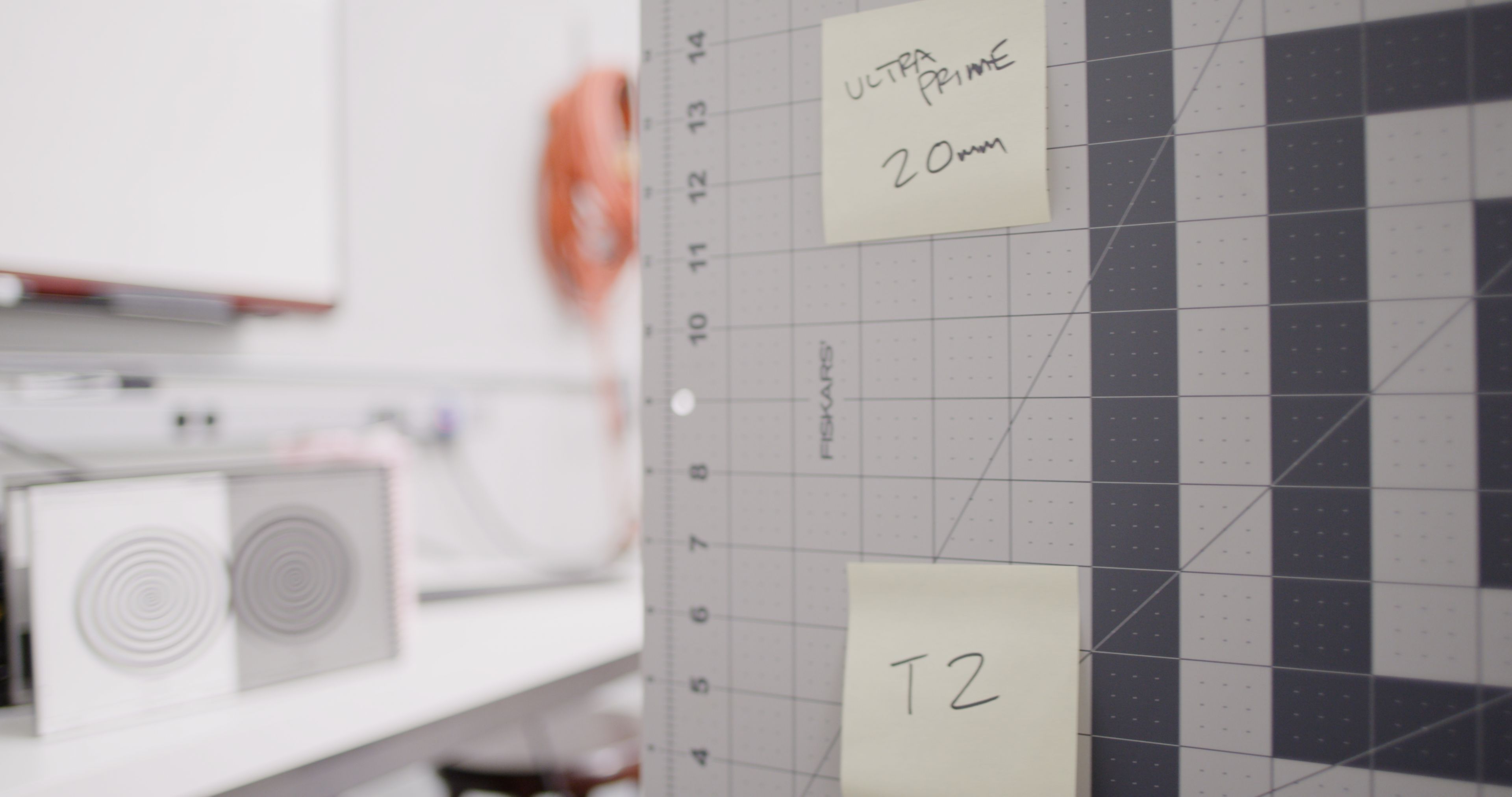 That chart in the corner is a DSC Labs focus chart, and it’s interesting that the left side of the chart is sharper than the right side. We saw this in every lens we tested: out-of-focus objects at the edge of the image circle were sharper than they were toward the center. Normally this effect is hidden because it falls outside of the normal 35mm Academy frame. This is but one example of the crazy goodness we found when pushing average lenses to their limits. 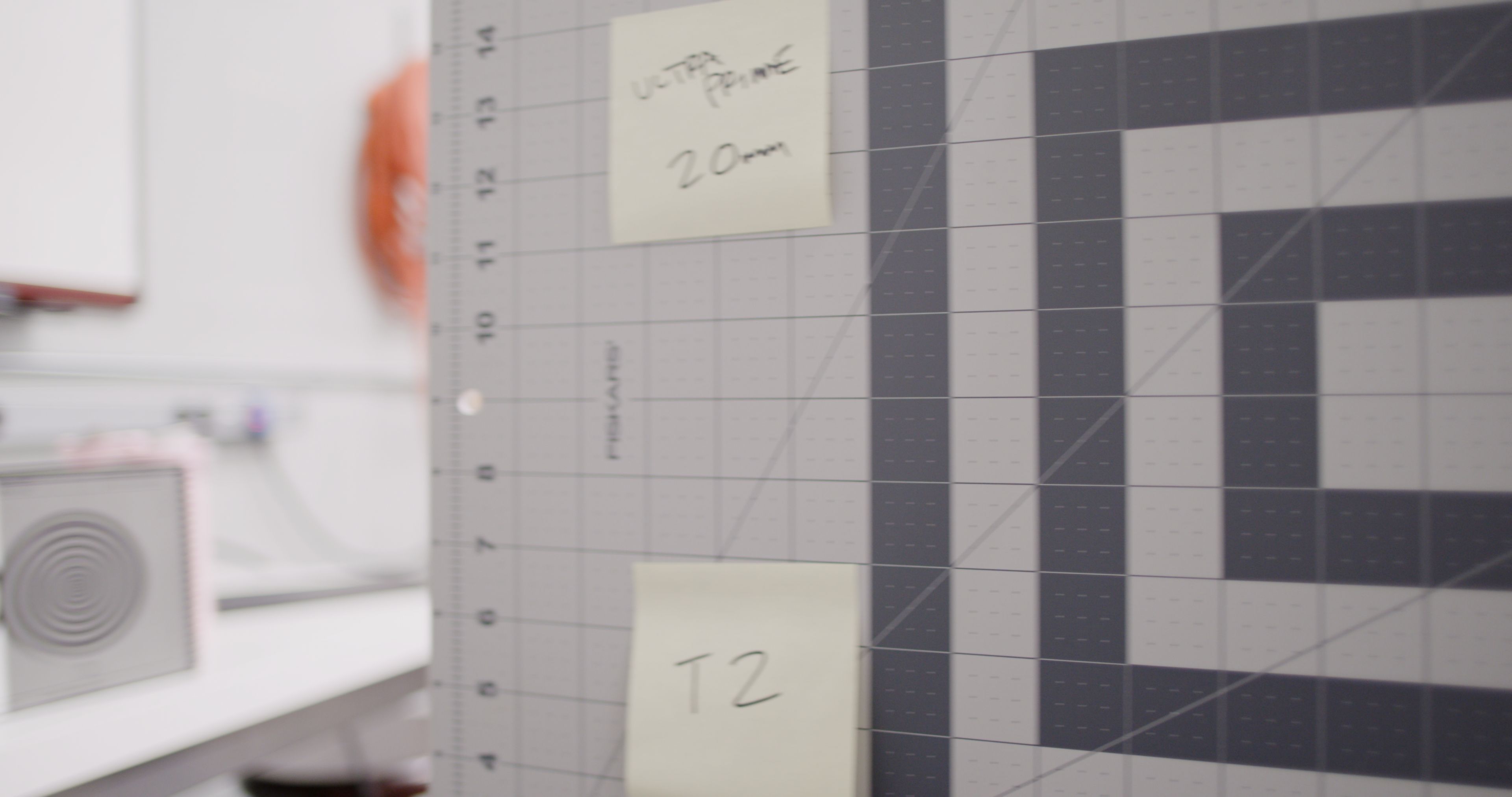 The darker half of the chart better shows the edge of the image circle coming into focus.

Ultra Primes seem to work well out to 5.5K, although this varies a little depending on the focal length. Master Primes don’t work well beyond 4.5K on the Monstro and had the narrowest image circle of any lens we tested, although I’m told that’s a side effect of the wide maximum T-stop. Cooke S4s work fairly well at 5.5K, and even some TLS Cooke Speed Panchros covered 5.5K, although they showed more craziness than any other lens set, as you’d expect.

Rather than shoot charts, I asked the camera crew prepping next to us if I could use them and their gear as live subjects. They agreed.

This is a 50mm Ultra Prime captured at 5.5K resolution, which uses roughly the same area of the sensor as S35 would. I focused on the case in the right foreground to ensure that each lens tested in this way was set to a consistent distance, in order to better examine background softness. At T2 the background is fairly soft.

I could have shot this at 7.5K instead, but… honestly, the hard vignette is a really cool look. I can think of a number of ways to use this creatively. The one issue I have with this frame is that it feels a bit off center, as if the mount is slightly offset. This was consistent on every lens I tested.

There are a couple of things that I found interesting in this image as compared to the 50mm image. First, look at the area around the follow focus knob:

The focus marking disk in the 5.5K image is soft, but shows some green chromatic aberration around the inner and outer edges. The 8K image shows some of this as well, but it’s nearly undetectable, and the transitions are much smoother.

What’s really cool, though, is that the 8K disk, while slightly softer, feels almost translucent by comparison to the 5.5K image. I’ve been told that one of the major differences between 8K images and lower resolution images is that they feel softer—not sharper—as it captures more subtle transitions between tones, hues and edges. The 5.5K focus disk image feels harsher and coarser, while the 8K image almost “floats” in space. This may be due to the reduced depth of field in the 8K image thanks to the 75mm lens, but resolution may also play a role.

There’s another section of the image that we should look at:

Once again, the decreased depth of field in the 75mm image has a translucent quality seen in areas of high contrast in the soft background. The 50mm image feels harsher. This may simply be due to reduced depth of field in 8K, but it’s fun to see what happens at the same T-stop between S35 and VistaVision.

Remember that weird edge focus effect I mentioned previously? You can see it in this shot: the foam texture in the top of the case is sharper on the right side, at the very edge of the image circle, than it is on the left. This is consistent in both lenses.

The 8K image shows a lot less chromatic aberration around the white highlights. That may be due to the increased softness of the 8K out-of-focus background, but I’d have thought there’d be some residual color. When examined with a color picker I could find almost none.

And compare, once again, the noise in the two images. The top S35 image shows a lot of green and magenta chroma noise in the lid of that foam-lined case, but the bottom 8K image shows considerably less. Both were shot at 7:1 compression.

We’ve looked at spherical lenses; now let’s look at a squishy one.

Okay, that’s pretty crazy. But that’s what we’d expect from an anamorphic lens. They were first invented as an affordable way to shoot widescreen films, but now we use them because they are utterly imperfect. In fact, when I focused as sharply as I could, this one didn’t snap in at all like the primes did. (That’s okay, though! Sharpness is overrated. It’s an artistic choice, so there is no wrong answer.)

Our old friend, the foam-lined case lid, looks much less contrasty now. We’re seeing that odd “coming back into focus” effect again on the right side of the case. Otherwise, there’s a lot of chromatic aberration going on. That could be great for an old school funkadelic look, but if you want something more ethereal then 8K spherical would be an interesting option.

Anamorphic is almost harsh, though, in the way it distorts backgrounds. On the one hand, it captures lower resolution horizontally due to the 2x squeeze, so it’s technically softer in that dimension, but the vertical bokeh, with additional color fringing, blends less smoothly than the 8K spherical does.

All of these images were shot wide open at T2 or T2.3, depending on the lens. There’s an argument that says the 8K look can be recreated in S35 just by opening up a stop or two, but I don’t think that’s always possible. I also think there’s probably a difference between the image quality of a wide prime vs. a longer prime, as longer focal lengths are easier to design. If nothing else, though, the noise issue is an interesting differentiator.

I’m looking forward to playing some more with large sensor cameras, and forcing lenses to do things they were never meant to do. That’s where the creative fun lies.