I, for one, welcome our new large format overlords.

One of my local rental houses, Videofax, recently took delivery of a RED Monstro and a set of Sigma large format cine lenses. One of the company’s partners, Jim Rolin, who is known as one of the best video engineers in this market, invited me in for some informal testing. I haven’t done much of this in the last year or two because it’s painstaking and tedious work, and I’m trying to focus on more artistic ventures, but I’m also pretty keen on learning how to get the most out of large format acquisition. I’m especially fascinated by the optical possibilities.

I’ve long known that there’s a “large format look.” I remember this from my film school days, where we’d seek out screenings of restored 70mm classics such as Lawrence of Arabia, Dr. Zhivago and Spartacus. Now there are more recent examples, but back then 70mm film had fallen out of fashion, primarily for cost reasons.

There was something about how large format cinematography reproduced spatial volumes that felt special. Wide shots, in particular, were just… different. For a long time I couldn’t put my finger on why, but majestic wide shots with close foreground and distant background objects felt epic in some unique way. When I look at the Bluray editions of those films I can still sense that difference.

I’m not an intuitive cameraman. There are DPs who light and frame based on gut feelings and instinct, but I’ve never been one of those. When I see something I like, I try to figure out exactly why I like it, and how to reproduce it on demand. I’m not content to hope it happens again: I want to master that look and impose it at will. It’s not enough for me to know that large format cinematography has a certain feel. I need to learn why it works, when it works, and how to make it work every time.

Playing with Monstro, and having some large format primes at hand, gave me a chance to figure this out.

Jim and I kept the test very simple. We placed Nick Schrader, prep tech extraordinaire, about 2′ from the Monstro lens plane, and lit him with a bounced tungsten fresnel. We set two test charts on wheeled stands on either side of the frame as frame edge references, and then we set up a shot in full frame 8K using a Sigma 35mm prime with the stop set to T5.

It’s pretty safe to say that the background of any shot is going to be soft if the lens is focused at 2′. The question is, how soft? The next step was to reproduce the same frame in the equivalent of S35, from the same camera position. As the sensor diagonal is 1.6x larger than S35, we performed some quick math:

I asked Jim for a 21.875mm lens and he gave some weaselly excuse about not having one, so I worked around his lack of foresight by using a 20mm lens instead. (It was that or ask for the 25mm lens and a hammer. Jim was not excited about that option.)

The next step was to figure out how much sensor crop was necessary to give us an S35 angle of view. RED helped us out considerably by listing the physical size of each sensor crop in the resolution menu. The closest match was 5K, so we dialed that in and framed up a shot.

The angle of view was slightly wider than the 8K view, so I cropped the shot to match using the wheeled charts on either side of the frame as a reference. Here’s the result:

The angle of view is exactly the same, but the depth of field is significantly increased. Everything in the background appears sharper. 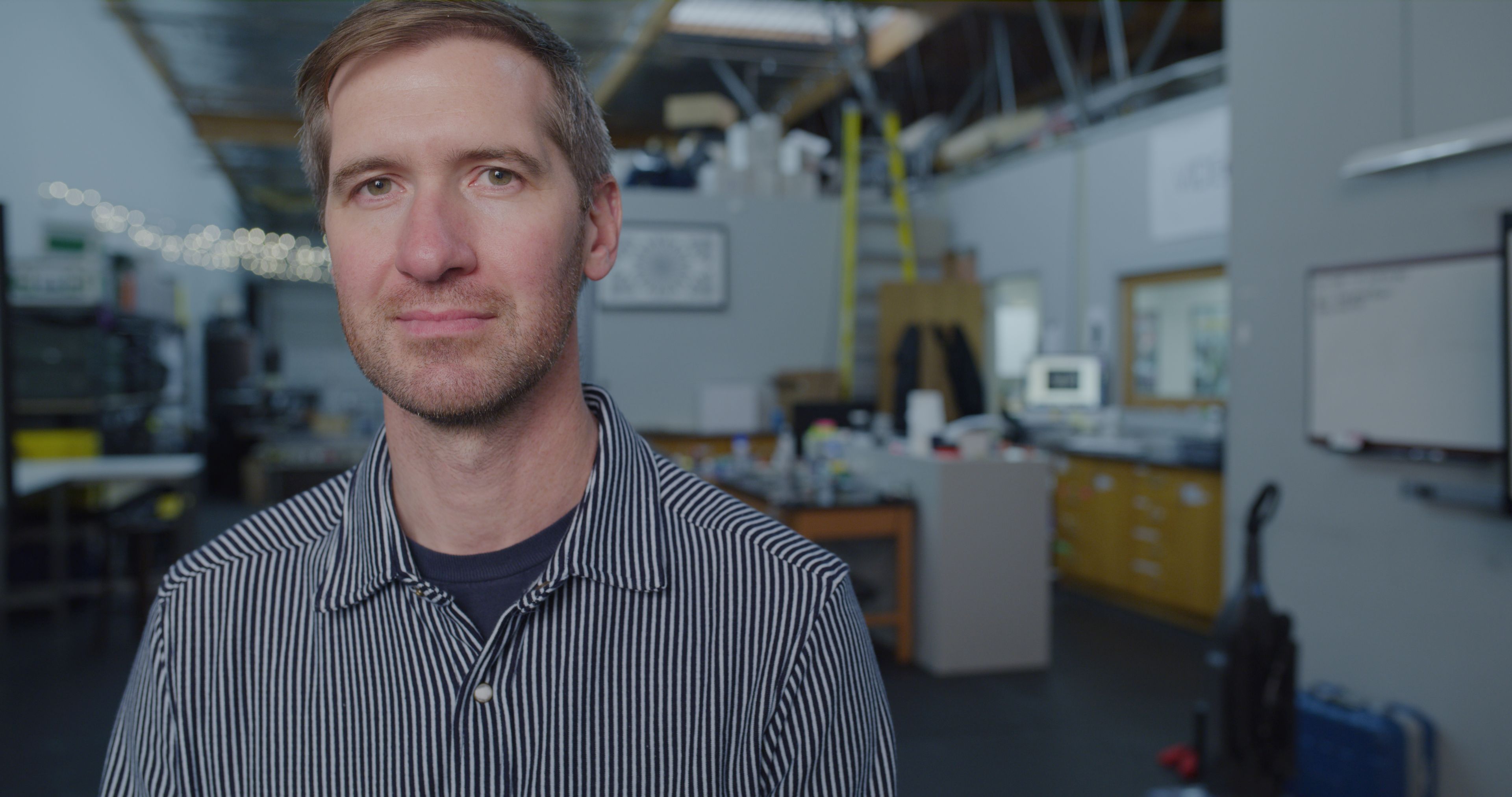 I don’t see any obvious distortion differences in Nick’s face that can’t be explained by the fact that he holds his head slightly differently in each image. Both lenses were set to exactly the same stop. The only difference I see is that the 8K full frame image has much less depth of field… but what a difference.

For any S35 frame, the equivalent Monstro 8K frame will have nearly half the depth of field, because the lens used will have to be 1.6x longer in focal length. The longer the focal length, the less depth of field. This is probably the biggest difference we’ll see when working in larger formats going forward: whereas soft backgrounds were primarily the domain of closeups and medium shots in the past, now we can soften the backgrounds on wide shots as well. For me, this increases the sense of depth I feel in a frame because the background feels closer. The S35 frame feels wide and distorted, as if shot on a wide angle lens, but the 8K frame doesn’t: the foreground distortion is the same, but all the sharp lines in the S35 frame feel farther away than the soft, large blurred lines in the 8K frame. The sense of depth within the frame, between foreground and background, feels more realistic.

I feel as if I’m on to something here. A softer background feels closer in a wide shot, as we’ve learned that soft backgrounds are typically the realm of long lenses that compress depth. Here, depth compression works the other way by making the depth of the space feel more realistic, not because there’s less distortion but because everything that’s out of focus in the background just feels bigger and closer.

This may not be the whole answer, but it feels like a lot of it. I plan on performing more tests, and hopefully I can take Monstro out on a shoot in the not-so-distant future.

Stop by and say to me at the Arri Close-Up Event this Friday, January 19th, in Burbank. Register here.