Photographer Jim Brandenburg filmed the forests around his home for almost a decade, not sure about what to do with the material collected. The collection finally turned into project Nature 365, a daily video about nature and wildlife. 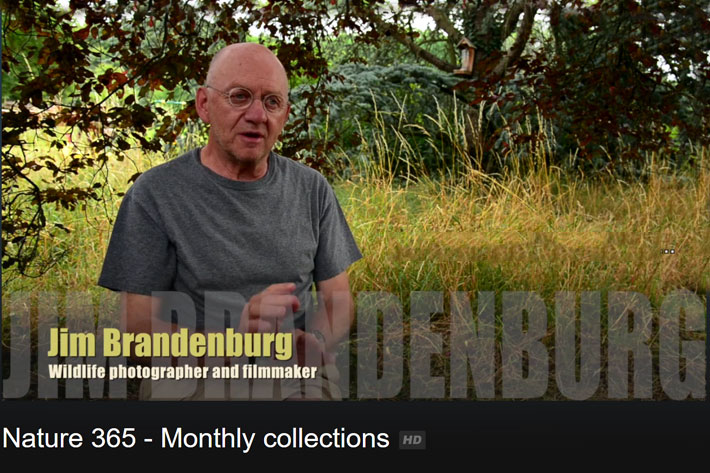 Although mostly known as a photographer, Jim Brandenburg has his name associated with movie and TV work, which includes filming with NHK in Japan, National Geographic Television Specials and the BBC television series “Life.” But the videos he captured for over a decade are something else, a secret only recently revealed.

Known for his work with wolves, but also for being an explorer of technologies, as he did on books as Looking for the Summer, which is both a path out of the commonly accepted Nature photography and the result of an exploration of digital cameras in the early 2000’s, Jim Brandenburg has traveled the globe as a photographer with National Geographic Magazine for several decades. When he has the chance to get away from all that, Brandenburg returns to Minnesota, the place the photographer calls home.

For many years, says Jim Brandenburg, I filmed the forests around my wilderness home in the great northwoods and the wide-open prairies of my childhood. I had no particular project in mind; I simply enjoyed documenting the moods of the day and the coming and goings of the wild creatures that were almost like family to me. It became like a diary and for many years it was rare not to ‘write’ something with my camera nearly every day.

The material collected throughout the years is now available for people to see on the project Nature 365, which each day shows one minute of video from the vast collection captured by Jim Brandenburg DSLRs. The project took shape when Brandenburg gave the hard drives with video to director Laurent Joffrion.

One day, says Joffrion, “Jim Brandenburg came to me with a mysterious gift. He gave me some hard drives filled with video clips that no one had ever seen. A work of several years in the northwoods and the great prairies of the Midwest, USA. His backyard at Ravenwood, where he lives, and Luverne, where he was born.” Brandenburg told Joffrion: “It’s for you… I don’t know what we can do with this, but perhaps we could work together?“

Laurent Joffrion says he reviewed all the videos, hours and hours, and found a remarkable body of work. The passing of the seasons, from Spring blooms, to the first snows and all in between. For almost ten years, Jim Brandenburg filmed his natural environment, keeping an exclusive journal which Joffrion says is exceptional. These videos, continues Joffrion, “are remarkable as they come from a long term commitment, as they reflect a unique and poetic vision by Jim, and as they show the beauty and diversity of the great natural systems of the northern hemisphere, the boreal forest and the great plains, as they are when their wilderness is preserved. I don’t think I’ll ever have another opportunity to work with such a body of work on a natural history subject.”

Aware of Jim Brandenburg’s experience with some of his books, which were built on the principle of one picture a day  –  Chased By The Light, Looking for the Summer or 93 Days of Spring – Laurent Joffrion thought: “Why don’t we present one daily video sequence, for the whole next year ? 365 original clips which, as a set, would reveal the pertinence of Jim’s documentary work. A journal; a collection of short and personal stories; an innovating web documentary offering an authentic and poetic vision of nature…”

The result is Nature 365,  which Jim Brandenburg  refers as a safe home where his stories “can be shared with many of my friends from around the world. It surprised me how extensive this diary had become. Day by day, year after year the pages accumulated. The resulting journal found its voice. Each day a one minute impression of a unique event that I was fortunate to witness is presented. Less can be more in this case. Like a good poem, the material that is left out gives weight to what remains. Nature has blessed me with its gifts of subtle but powerful teaching. One might even describe these moments I give back as a form of a small prayer; a mindful effort to pay homage to a wild and natural living land.”

While the 2016 collection is running since January, the 2015 collection is now available together, in response to the wish of many users, as VOD or Video On Demand.