From June 9th to the 20th, NewImages, Tribeca and Cannes XR will partner in order to produce a unique and VR dedicated platform available to everyone. The VR story JAILBIRDS: Bwa Kayiman will be there! 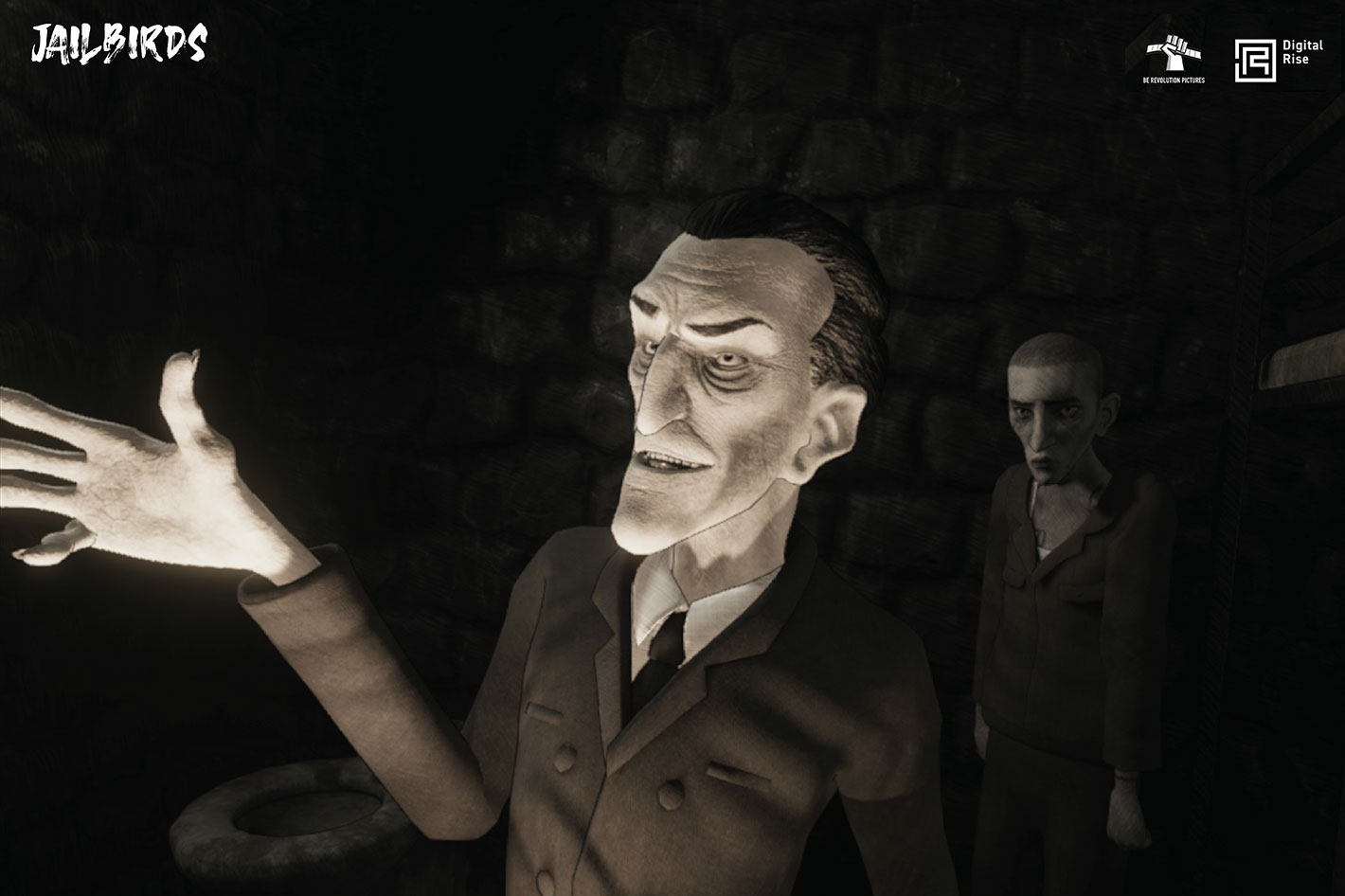 JAILBIRD: Bwa Kayiman, is a VR narrative experience on a human scale, a fantastic tale about the prison system and human freedom. Discover how a comic book story was adapted to Virtual Reality.

Between virtual reality, comics and animation, JAILBIRDS: Bwa Kayiman, trilogy first episode, is a bittersweet tale about men freedom. In his work, Director Thomas Villepoux uses VR codes and interactive storytelling techniques in an innovative composition. This innovative drama relies on the viewer engagement by alternating objective and subjective points of view for the first time, creating a subtle blend of viewer movement and camera movement.

JAILBIRDS: Bwa Kayiman is a fantastic tale based on the visual universe of Philippe Foerster, Belgian author of black poetry comics (freely adapted from “Paulot s’évade” in “Certains l’aiment Noir” published by Fluide Glacial in 1985). How do you adapt a comic book with such a particular style in a medium that uses real time animation – that is, video game tools that have their own aesthetic?

Fred Remuzat handled the first work. He is an art director specialized in CGI, who can make a character exist in a pencil sketch and then translate it into polygons and vectors. Together, Fred Remuzat and Thomas Villepoux defined the visual style and the design of the characters. Then the animation studio The Pack created the 17 special “shader” that enables this “pencil drawing render”. 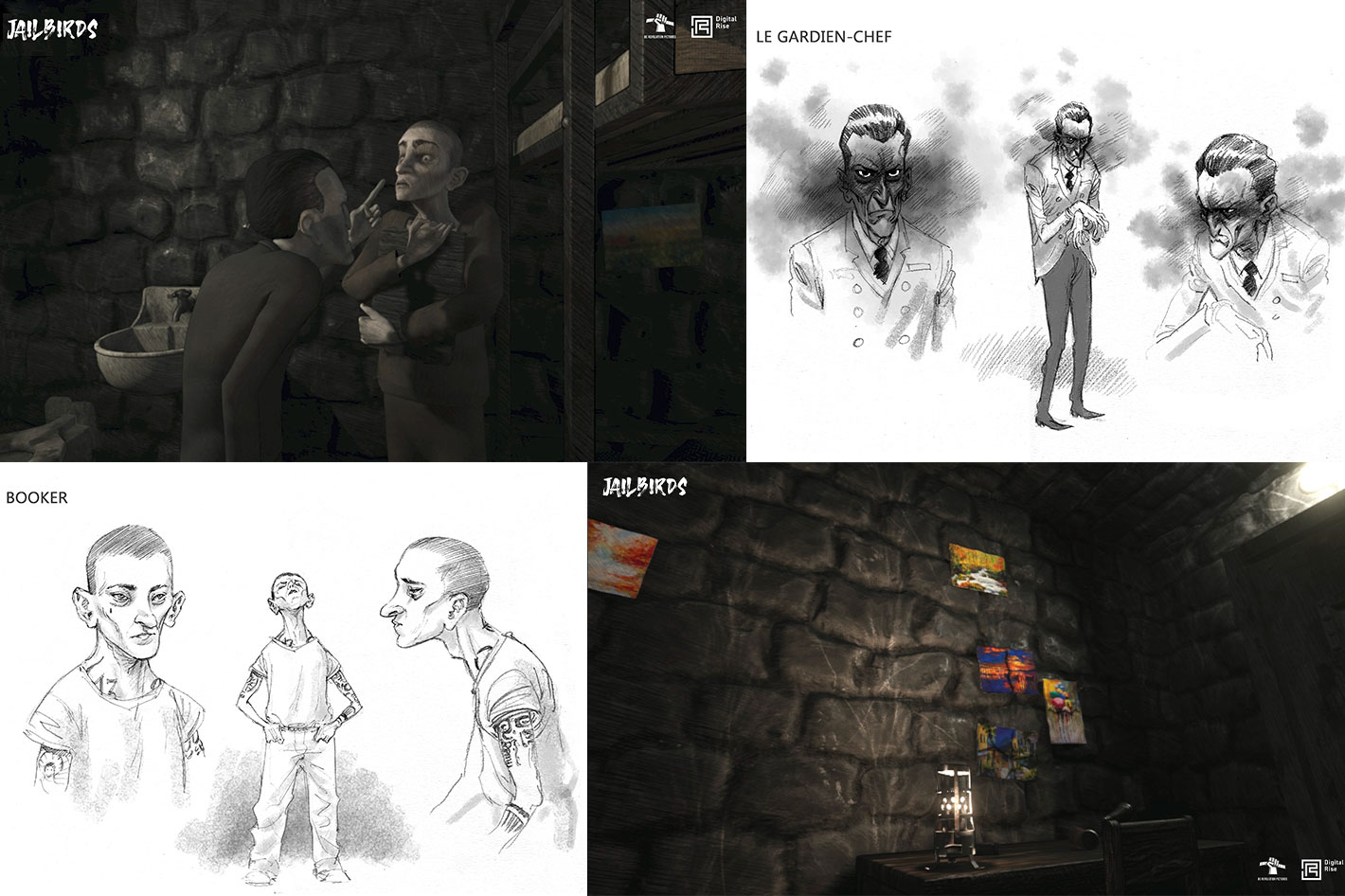 A metaphor for virtual reality

Real actors were chosen to embody the characters: Thomas Lemarquis (Snowpiercer (2013), 3 Days to Kill (2014), X-Men: Apocalypse (2016), Blade Runner 2049 (2017)) (Chief Warden), Barry Johnson (Felix) and Elliot Delage (Booker). A particular technical device was set according to three axes: same sound recording system for dialogues as for a shooting, filming facial expressions for characters animation, and filming body movements as an animation reference. An acting performance that gives strength and humanity to the characters. 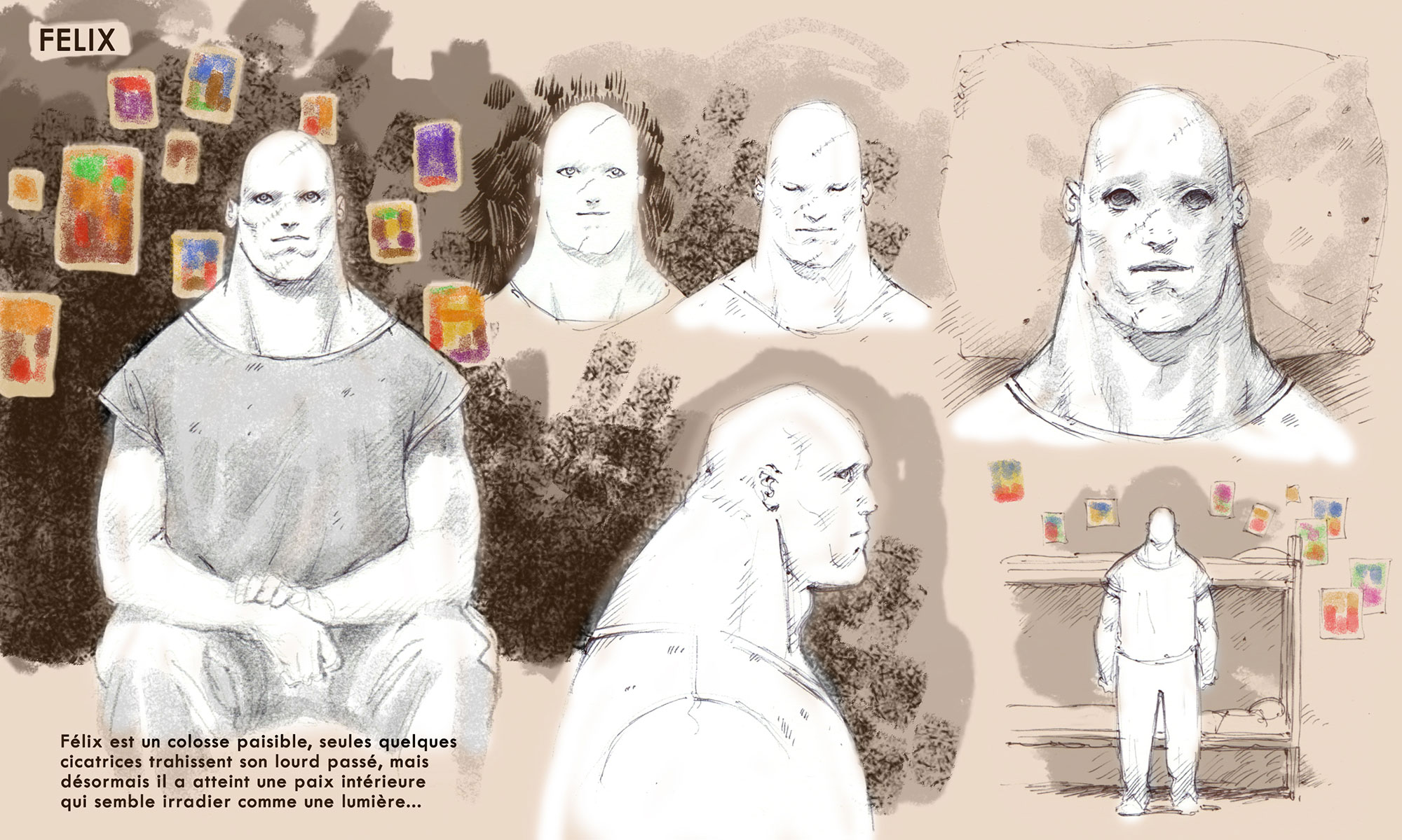 Set sometimes in a nightmarish prison, sometimes in beautiful landscapes, the experience makes full use of the assets of the VR medium as narrative tools. The story resonates strangely with the promise of virtual reality: a prisoner escapes each night as his eyes magically detach from his body and set off to discover the world that is physically inaccessible to him.

In fact, by using Virtual Reality as the medium to reach audiences, JAILBIRDS: Bwa Kayiman poses an interesting question: What better metaphor for virtual reality? In fact, our eyes escaping to discover the world while our body is trapped in the physical reality is very much what VR offers. In these troubled times it is an experience which finds a particular echo. You’ll need a VR headset to try the experience. Online access will be available with the MOR – Museum of Other Realities) application, which is available via Steam and Vive platforms. 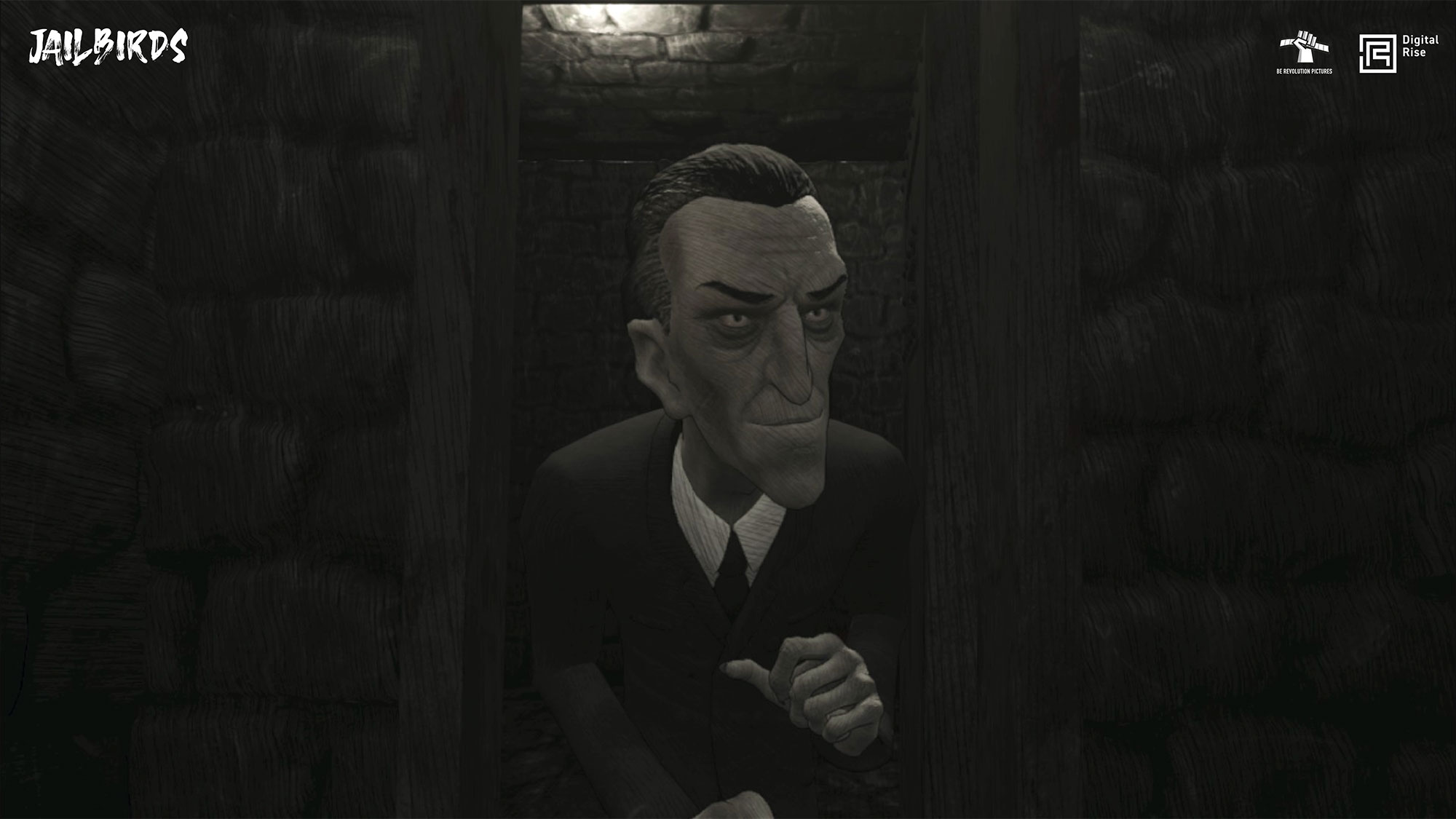 JAILBIRDS: Bwa Kayiman will be available from June 9th on both platforms. The MOR app is available to users of the following PCVR headsets: Rift, HTC Vive, Valve Index and Windows Mixed Reality. Oculus Quest’s users can access it by using Oculus Link or Virtual Desktop application. Even if you do not own a VR headset, it will be possible to watch JAILBIRDS: Bwa Kayiman through in situ access, within the framework of the three events and also thanks to the network of partners “lieux satellites” deployed throughout the world and in which dedicated VR stations will be set up. 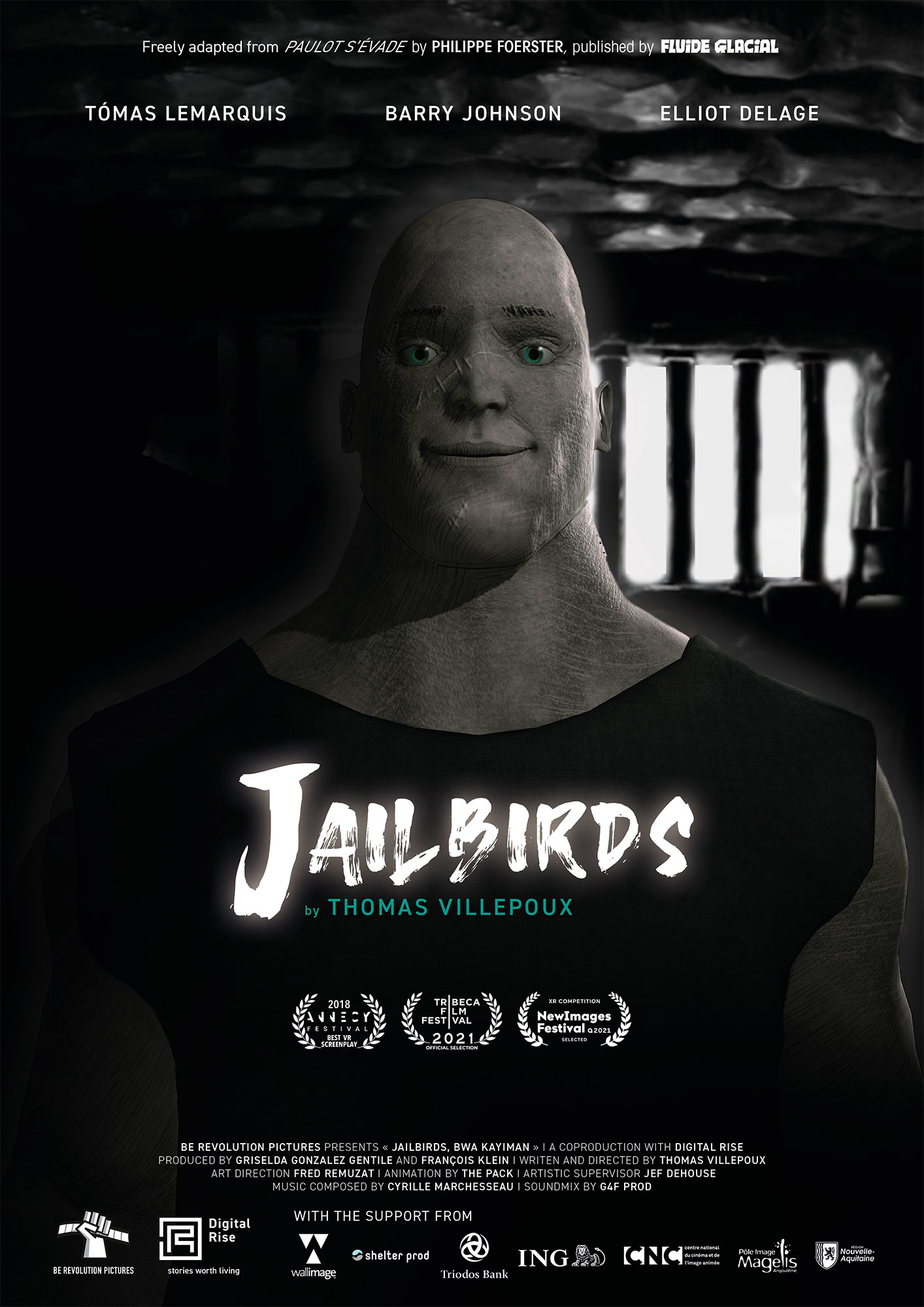 JAILBIRDS: Bwa Kayiman won some prizes before: the Prix Wallimage – stereopsia du meilleur projet VR in 2016, le Prix Courant-3D – Nouvelle Aquitaine du meilleur projet immersif in 2017 and the Prix SACD du meilleur scénario VR au “Pitch projets numériques” du Festival d’Annecy in 2018. Now it will have its world premiere in two festivals. The Virtual Reality story will be shown to professionals and to the public during the two events, both international leaders in the immersive creation sector.

The world premiere of JAILBIRDS: Bwa Kayiman happens at a pivotal moment in which through an unprecedented partnership, NewImages, Tribeca and Cannes XR are joining forces to fully democratize access to VR and immersive creation. In fact, from June 9th to the 20th the three festivals will partner in order to produce a unique and VR dedicated platform available to everyone. All VR works in competition will be visible online via the virtual exhibition XR3.

Pioneer of a new exhibition concept and result of each event’s expertise in the immersive arts, XR3 will gather around fifty works among which several world premieres previews. All selections will be available inside the Museum of Other Realities (MOR), a virtual exhibition space with an inventive scenography specially designed for the occasion. Thanks to its hybrid dimension and its different modes of access, the XR3 platform thus offers the works presented to a worldwide influence and to all audiences.