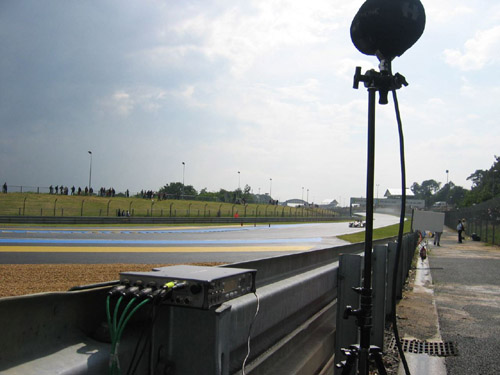 The full-length film was shot in high definition and features a surround sound mix of the event, which also included several pre-event races in Sebring, Florida; Long Beach, California and Monza, Italy before the big day in Le Mans, Sarthe, France. Holophone was tasked with creating the surround sound mix for the main event in France. Hartigan not only utilized Holophone’s H2-PRO to capture sounds on the track, but also from the audience and in the pit. He also brought the Holophone into town to capture the sounds of the region, including a local church, a street parade as well as a crowded market. All of the sound effects are based on the Holophone; the entire bed of the movie is real surround sound.

“When you watch the film, every surround sound effect you hear is real, we didn’t create any of that,” says Hartigan. “It’s all real ­? every car, every location ­? and it’s all from Holophone’s H2-PRO.”

As the lead sound mixer throughout the entire project, Hartigan spent three weeks in Le Mans capturing both the lead up to the race and the entire race itself. Hartigan and his four-person sound team used the Holophone H2-PRO along with Sound Devices 788T Digital Recorder to record the sounds of cars going by and the audience, giving viewers a realistic, re-creation of the event in surround sound. Hartigan was driven in a golf cart around the track in order to record different unique locations. 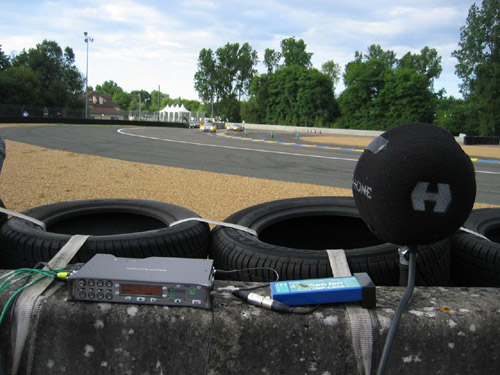 “The Holophone is so low profile, I can take it anywhere,” continues Hartigan. “We had it everywhere, we had it on the track, we had it in the woods, we had it in the pit; I recorded a whole segment with all of the mechanics fixing a car and no one minded it.”

Holophone’s H2-PRO surround microphone has revolutionized the surround sound industry, quickly becoming a standard for the capture of up to 7.1 channels of audio for HDTV broadcast, film, live events and music production. Utilizing a patented design, the H2-PRO contains eight mic elements, now featuring Sennheiser MKE 2 mic capsules, arranged to coincide with the typical surround speaker setup found in a studio or home theater. The unique structure of the device and the configuration of the mic elements allows H2-PRO users to effortlessly capture, from a single point, an accurate and immersive 3D audio experience.

The 24 Hours of Le Mans (24 Heures du Mans) is the world’s oldest sports car race in endurance racing, held annually since 1923 near the town of Le Mans, Sarthe, France. Commonly known as the Grand Prix of Endurance, it is organized by the Automobile Club de l’Ouest (ACO) and runs on a circuit containing closed public roads that are meant not only to test a car and driver’s ability to be quick, but also to last over a 24-hour period. “Truth in 24” is available as a free download on iTunes.com.

Holophone is committed to developing and commercializing products that use patented 3-D audio technology to bring the physical experience of “really being there” to a new level for all audio and visual productions by professionals and hobbyists. Holophone provides customers and business partners with industry-leading product and service quality. Holophone is firmly dedicated to providing outstanding value, excellence in service, and product performance.