Charles Churchward’s coffee table memoire worth its weight in gold 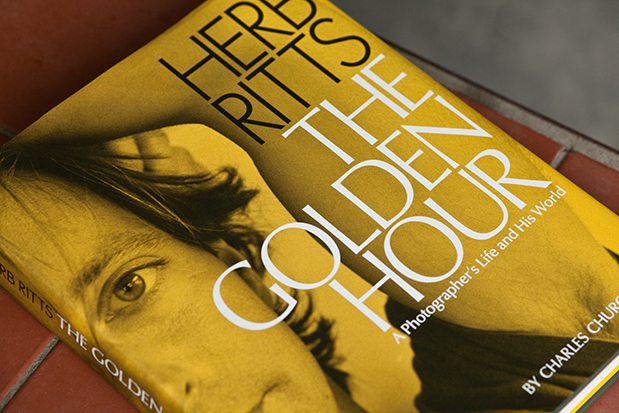 “Herb was all about a slick, slippery silvery image,” says art director Marc Balet, as quoted in Churchward’s luscious reportage of the the man, his method and madcap life.

No I haven’t read all of this book. I’m just 2/3 the way through at page 207 of 315. But this biographical picture book is so captivating in story, and fascinatingly immediate in its unusual format that I can’t resist writing about it. I can’t wait to hear what happens next. Minutes after I finished this commentary, the CBS Sunday Morning program came on featuring Ritts and author Churchward! Obviously others agree with me. 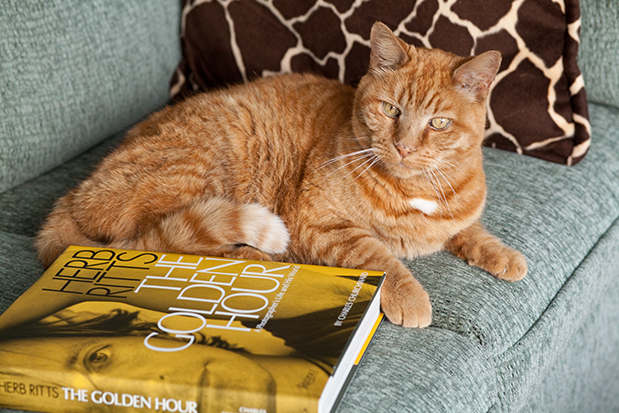 Sneakers the golden cat snuggles up with a good read.

I’ve never seen a book written like this. The text is the up close and personal story entwined from short snippets of outrageously colorful memories of 97 individuals, spanning movie actors, musicians, models, art directors, editors, publishers, assistants, photographers and family. Fortunately there’s a who’s who directory so you can keep the players straight in this breathlessly hot and fast tale of celebrity and artistic fire. The intimate tone and texture of interview segments give the reader the impression of clandestinely listening in on very private conversations. It’s like a big party all the time – a kaleidoscope of household famous names coming in and out Herb’s front door. The back story behind all those iconic images. Comments are preceded by each contributor’s name, so you know the point of view, and the story unfolds in loosely chronological order, grouped to reveal the time context and social milieu of the decades that totally changed our perception of fashion and celebrity, not to mention photographic style.

You’re there when Elizabeth Taylor jokes with Herb and almost fools him into stepping backwards right into a swimming pool.

Stand with stylist Michael Roberts when Herb commands him to tie flower-printed boxer shorts on the nascent star Madonna’s head for a frame or two during a men’s fashion shoot. She got “Herbified” early.

Model Fred Harding, famous in the image as the ultra grease monkey carrying two huge tires, recounts, “I didn’t know who Herb was. My LA agent told me that Herb was going to make me famous. It was 1983.” And no, I’m not going to print that iconic, hunky image of Fred. Buy the book and see for yourself. It’s the frontispiece.

Colleague photographers like Bruce Weber and Matthew Rolston weigh in, along with a slew of assistants and support personnel. I particularly liked hearing from assistant Mark McKenna about Herb’s simplicity of system. As a photojournalist, I can only laugh and marvel at assistant Linda Posnick’s description of how Herb didn’t believe in dialing in camera settings himself, “…because in his mind that was not his job. It was up to the assistant on camera to stand next to him and make sure he was on the right ‘-stop, that he was on the right shutter speed.”

Mom Shirley Ritts constantly redecorates Herb and his houses, and insults everyone equally from Richard Gere to Bobby Shriver to Michael Jackson to Elton John.

Michael Jackson hangs out, and shoots In the Closet music video with Herb and Naomi Campbell.

k.d. Lang shovels snow and gets shaved on set by Cindy Crawford.

And on and on; like I said, 315 pages of the best comedic/tragic/inventive moments revealed with sympathy and hilarity by Herb’s vast collection of friends, lovers and colleagues.

And then there’s the golden light of the book title, those few minutes at dawn and dusk, that we later photographers know and love so well, thanks to Herb’s lead. Described in detail by art directors and editors, Herb pursued that light his entire career. The times were golden, too, in the new, relaxed and natural way personalities were pictured, both sensual and intimate. Everyone can relate to Herb’s work with its satisfying mix of art, celebrity, impact and sexy imagination. Santa Fe gallery owner Allene Lapides “…had to hold people back” when people had to be let out before more could go in. At the time “k.d. Lang was in such shock she sat in my office.” The public paid, and continues to pay, fine art gallery prices for Herb’s work. This great book will be your little piece of those golden hours on your table.

A Photographer’s Life and His World