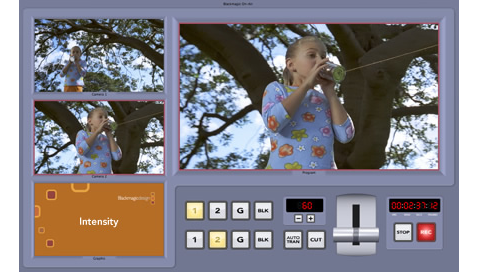 Thanks to the new HDMI input interfaces like Blackmagic’s Intensity and Intensity Pro, it is feasible to connect certain HD cameras with HDMI output live to a computer, and even dissolve between them without genlock.

Just install two Intensity (US$249 x 2) or Intensity Pro (US$349 x 2) cards into a MacPro tower computer, with Blackmagic’s included On-Air software. Compatible cameras include both HDV cameras and the new AVCHD cameras with HDMI output. This way (for live-to-disk 2-camera production), one can not only capture an “uncompressed” signal via HDMI, but also a “never-yet-compressed” signal. The only important limitation of the Blackmagic On-Air system is that you can connect a maximum of two cameras.

The Blackmagic On-Air software shows a preview image of each camera, plus a larger program image. If you activate it in the preferences, the preview image of the “on-air” camera will be surrounded by a red border, like a tally light. Also, if activated in the preferences, the program image may also be surrounded by a red border, which indicates that you are recording. The Blackmagic On-Air software allows cuts, dissolves and keys in real time.

A similar piece of software called BoinxTV works with the same pair of Intensity or Intensity Pro cards, although is aimed at video webcasting or video podcasting. BoinxTV is not limited to HDMI capture. It can also work with HDV cameras over IEEE-1394 as long as they have progressive modes. I will publish a complete article about BoinxTV soon.