Lighting doesn’t have to be complicated. It just has to be right.

Art Adams
Comment
The ARRI Academy isn’t only about learning how cameras work. We also teach how to use them.
I’ve never seen a class as motivated as the one we had in September. My co-instructor is Nico Fournier, of MTL Grande Studios in Montreal. We’ve been working to make the ARRI Academy as much about artistry as technology. As cinematographers, we use cameras to create art. The right tools make it easier to capture our vision, but it’s all about the vision. Technology is the facilitator, not the goal.
The course consists of two core pieces. Nico covers all the hardware on day one. I cover color, codecs and dynamic range on day two. After that, it’s up to the class to tell us what they want to learn. Upon completing a planned exposure exercise some of the students rolled the SXT to a small standing set and blocked a scene. Others went to a standing set and did the same with the Mini and the Amira. This worked well as we were able to cover the remaining material while using the gear.
Some of the students weren’t very experienced in working on set. I laid out a short dolly shot, lit it, and then walked them through the steps needed to shoot it—quickly. At first I used one light, but later I added a bounce card and another light. I quickly changed the lighting as the students cycled through camera positions.
Here’s a collection of several takes, operated entirely by students. We captured these in LogC to ProRes4444 at 23.98fps, using an ARRI Alexa SXT. The lens was a 32mm Ultra Prime, shot wide open at T1.9. The camera’s EI was 800. Nothing has been graded beyond adding the stock ARRI 709 LUT in Resolve.
The chess board caught my eye as it’s shiny.
I liked the idea of the practical light’s reflection moving across the chess board. The shiny pieces are a great indicator of where the light is coming from. I often find myself looking at shiny objects within a frame to determine how a DP lit a shot. Eye reflections also give clues about lighting positions and light source sizes relative to the subject. 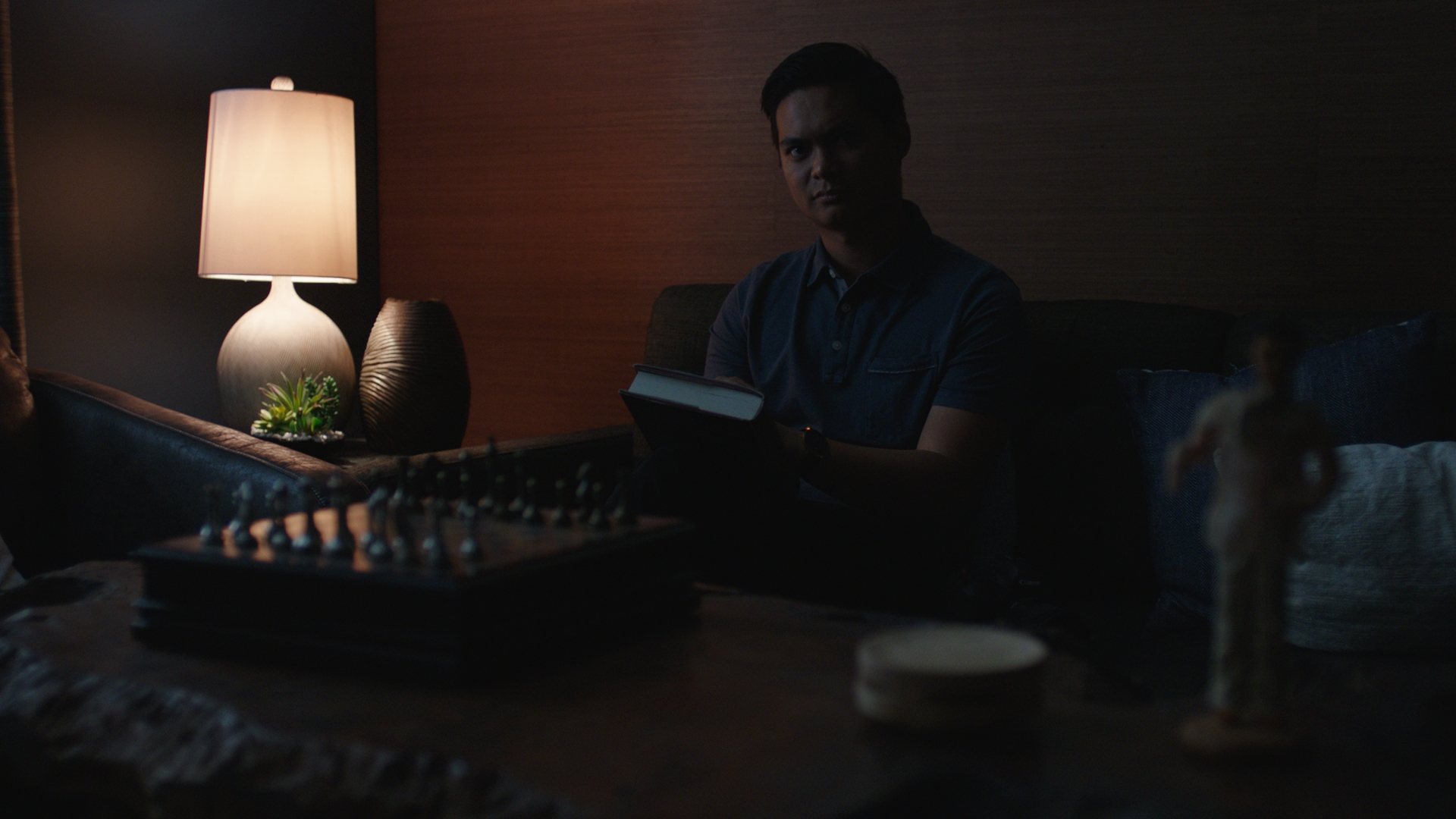 I kept this first setup simple. There was an S60 Skypanel on a stand outside the set, so I aimed it through the set window and curtains. My goal was to create a simple night interior and make the practical do as much work as possible. Filmmaking, while a creative effort, always has a budget and a schedule attached. The current trend is to shoot at very low light levels and make practicals do as much work as possible. This is important as the hardest thing to light in any shot is the background. It’s huge, and we don’t often have the luxury of lighting only what is in the current shot. We have to light everything and be ready to turn around at a moment’s notice. We save a lot of time if the lights illuminating the background are in the shot.
The original ARRI Alexa Classic was a huge breakthrough. Film is better at capturing highlights than shadows. Digital is the other way around, and prior cameras did not handle highlights as well as film. Practical lights couldn’t contribute much light without clipping. If we included a practical lamp and wanted it to look as if it was affecting the scene, we dimmed it down and hid another light. Alexa allowed us to work like film: a light within the shot could also light it, but without clipping.
In this case, the practical lamp is doing quite a lot. It’s lighting our subject (DP Austin Sabado) as well as creating a nice reflection in the chess board. It also creates a sense of volume due to the fall off of light across the back wall.
I like the mix of warm and cool. There are two keys here, the practical lamp and the S60. While neither of them do the job completely they work well together. Without the practical lamp the shot would appear too dark and lack shape. Without the S60 it would appear underexposed. A bright light in the frame gives the audience a reference that tells them the rest of the frame should be dark. The cool light adds contrast, interest and mood. And the blend of the two lights, as they wrap around Austin’s face, is realistic, as this is what light does all the time. Different sources, with different qualities and colors, mix together to illuminate natural settings. Doing the same here makes the scene feel “right.”
What’s most important to me is that the light sources are on the same side of the frame. A fill shadow on the wall to camera left would destroy the illusion for me. That’s why I’d either fill from the same side (camera left), or use a very big but dim source from behind the camera. Given a choice, I always fill from the “key side.”
Think of a room with windows all the way down one side. Each window is a source, and while they cast separate shadows they all blend together into one source. This source wraps around faces in a natural way. Tones run the range from highlight to mid-tone to shadow. A traditional key-plus-fill setup, where they oppose each other, results in two tones.
I’m okay with many shadows as long as they fall in one direction. 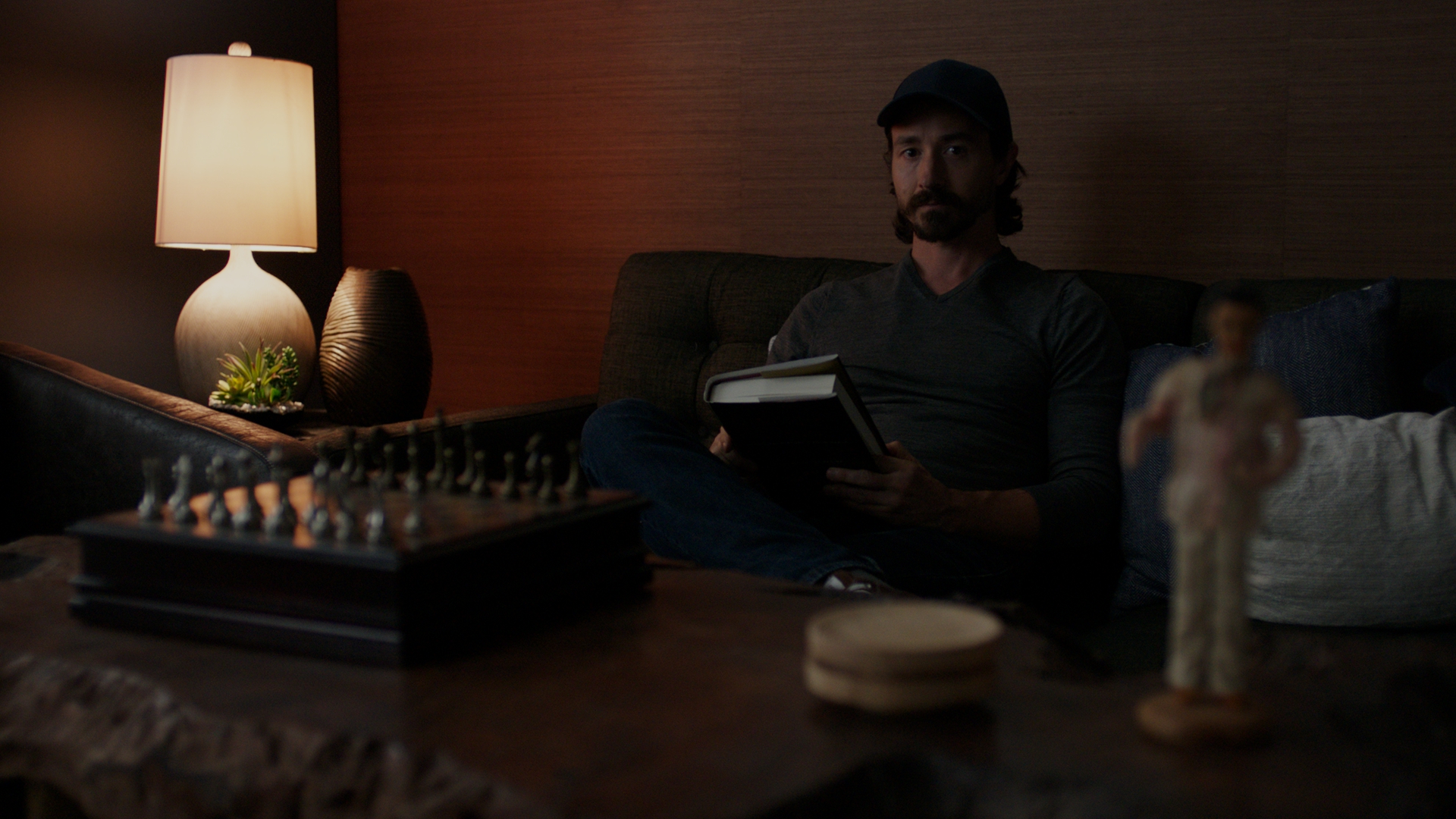 Our next subject is Jamie LeJeune (DP and colorist). For this setup I added a bounce card outside the set, on the same side as the window. 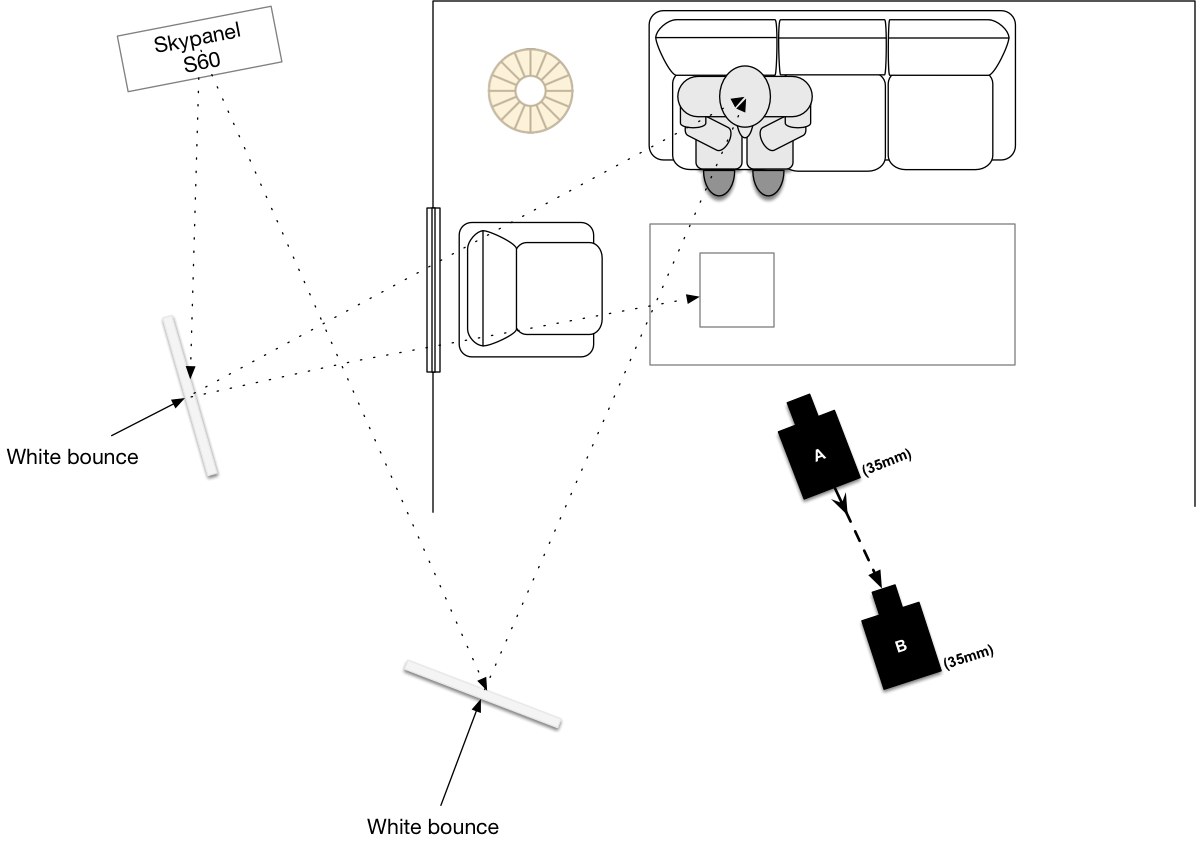 From Austin’s perspective, the practical lamp was behind and to the side. The window light was high and three-quarter frontal. From Jamie’s perspective, the bounce card is past the window and slightly in front of him.
The reflection of the bounce card in the wall behind Jamie’s head looks a little cool. That card is lit by the S60, which is now set at 3200K, and appears slightly cool by comparison to the table lamp. This phenomenon occurs with 3200K Kino Flo tubes, which is why I often use 2900K tubes with tungsten and practical lamps. (Most tungsten film lamps burn at 2900K-3000K, while halogen bulbs trend toward 2700K.) 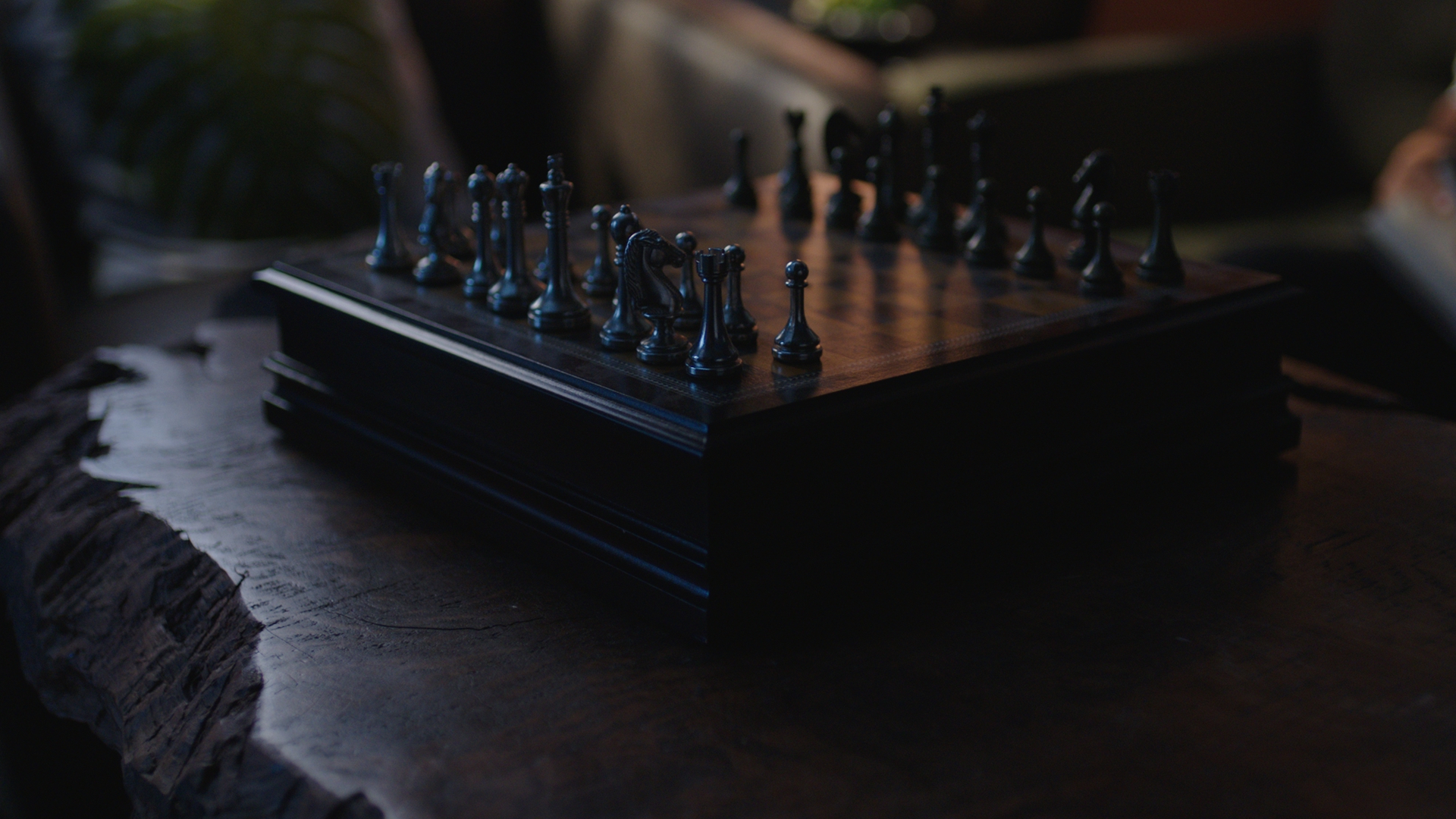 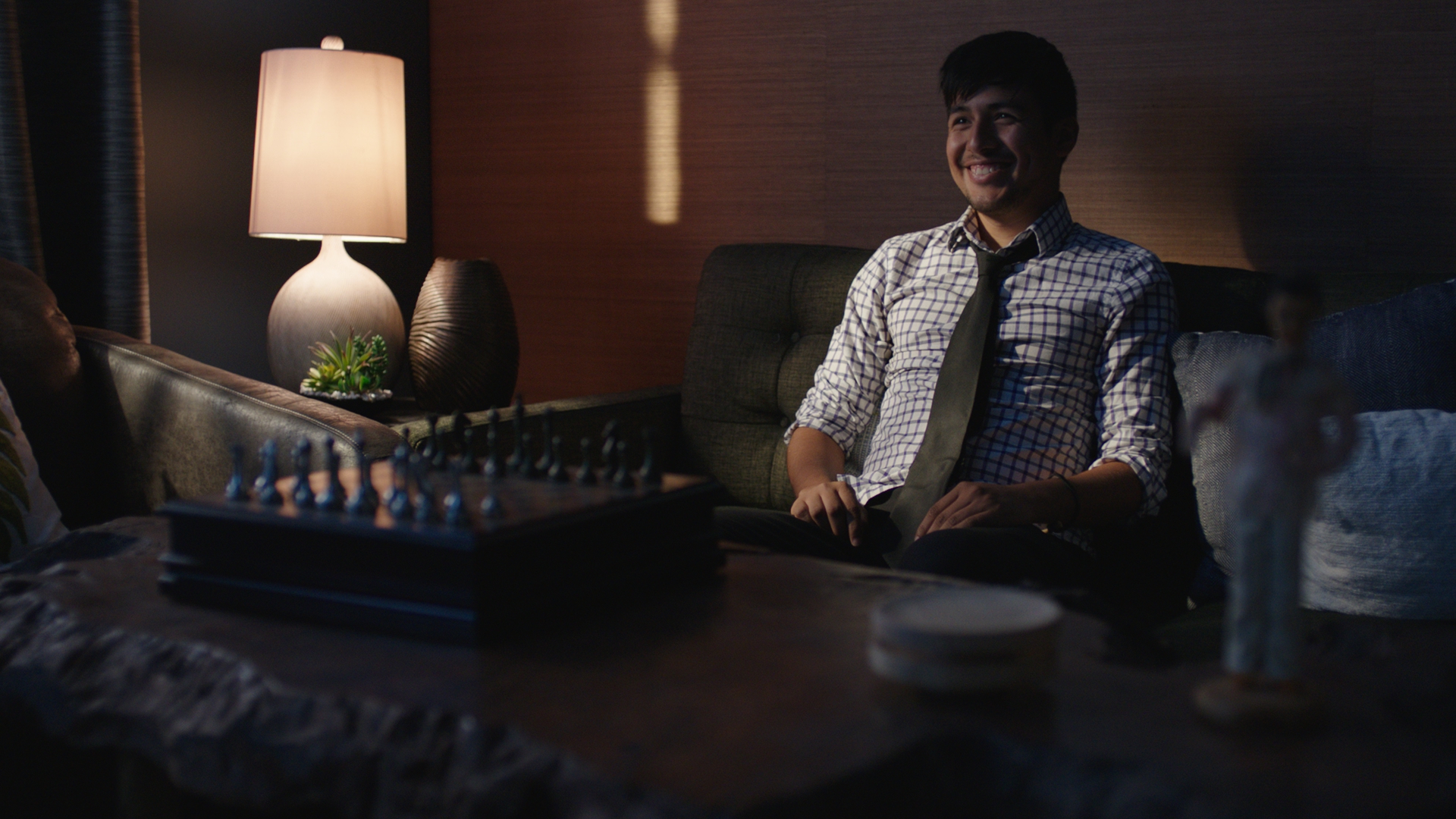 This is Leo Rodriquez (camera assistant). For this shot is the same as the last but for the addition of a small ARRI LED fresnel. It’s aimed through the window at a steep angle. I’ve raised it on the stand so that it hits part of his face but doesn’t create a large shadow on the wall. I like the feel of this. Sometimes the best lighting setups feel imperfect. Light in the real world is never perfect but can still be beautiful. 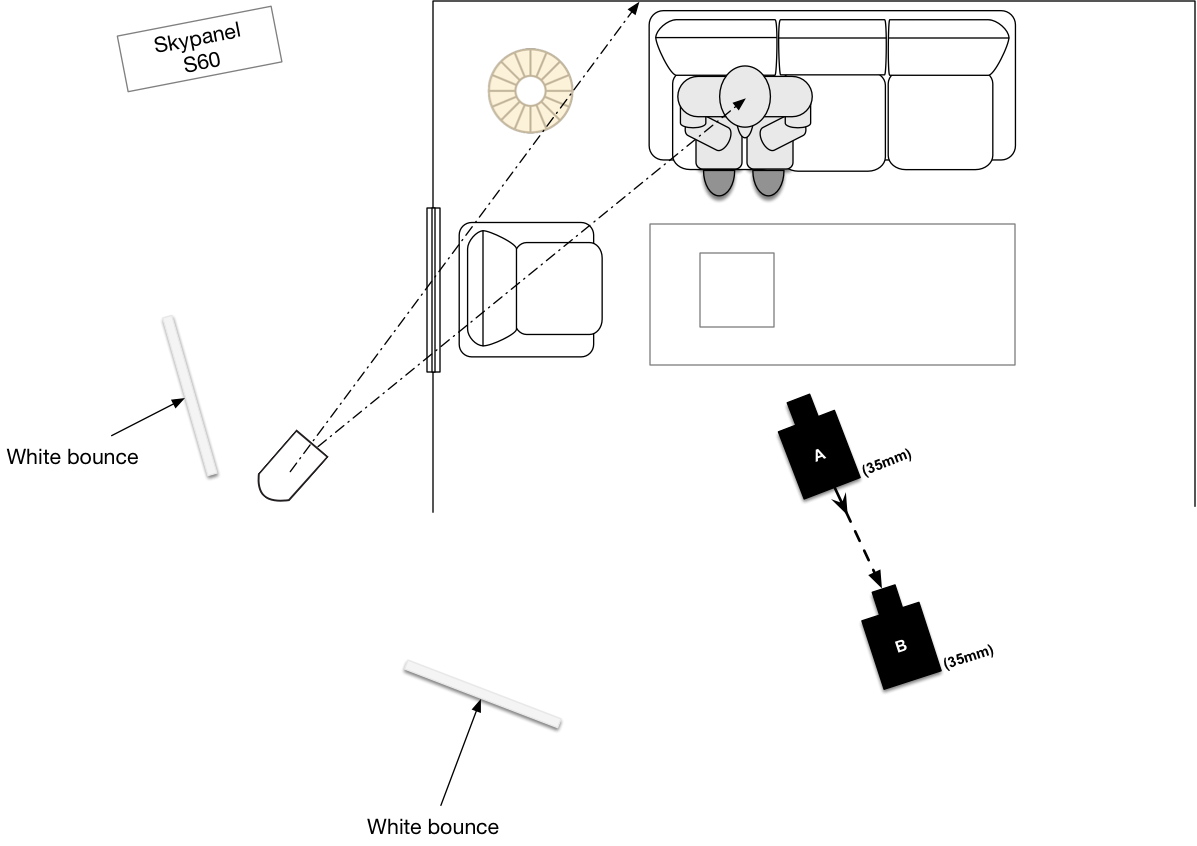 The fresnel is warm, but the S60 is cool again—at least 5600K, but maybe as high as 10,000K. I went for the feel of warm sunlight against blue skylight. This happens normally, as windows admit both sunlight and skylight. A stronger blue might feel theatrical, or like a night effect. A little coolness, that falls just beyond the limits of the warm sunlight, creates the sense that this was shot late in the day, in spite of the high sun angle. From Leo’s perspective, the sun is just peaking in, but the majority of his view would be blue sky.
A student pointed out that there are two head shadows on the wall, one hard and one soft. That doesn’t bother me. That happens in the real world. I’d only care if they were on opposite sides of his head.
The vertical streak of light on the wall is the fresnel leaking through the side of the curtains. This is a happy accident that feels “real” to me. 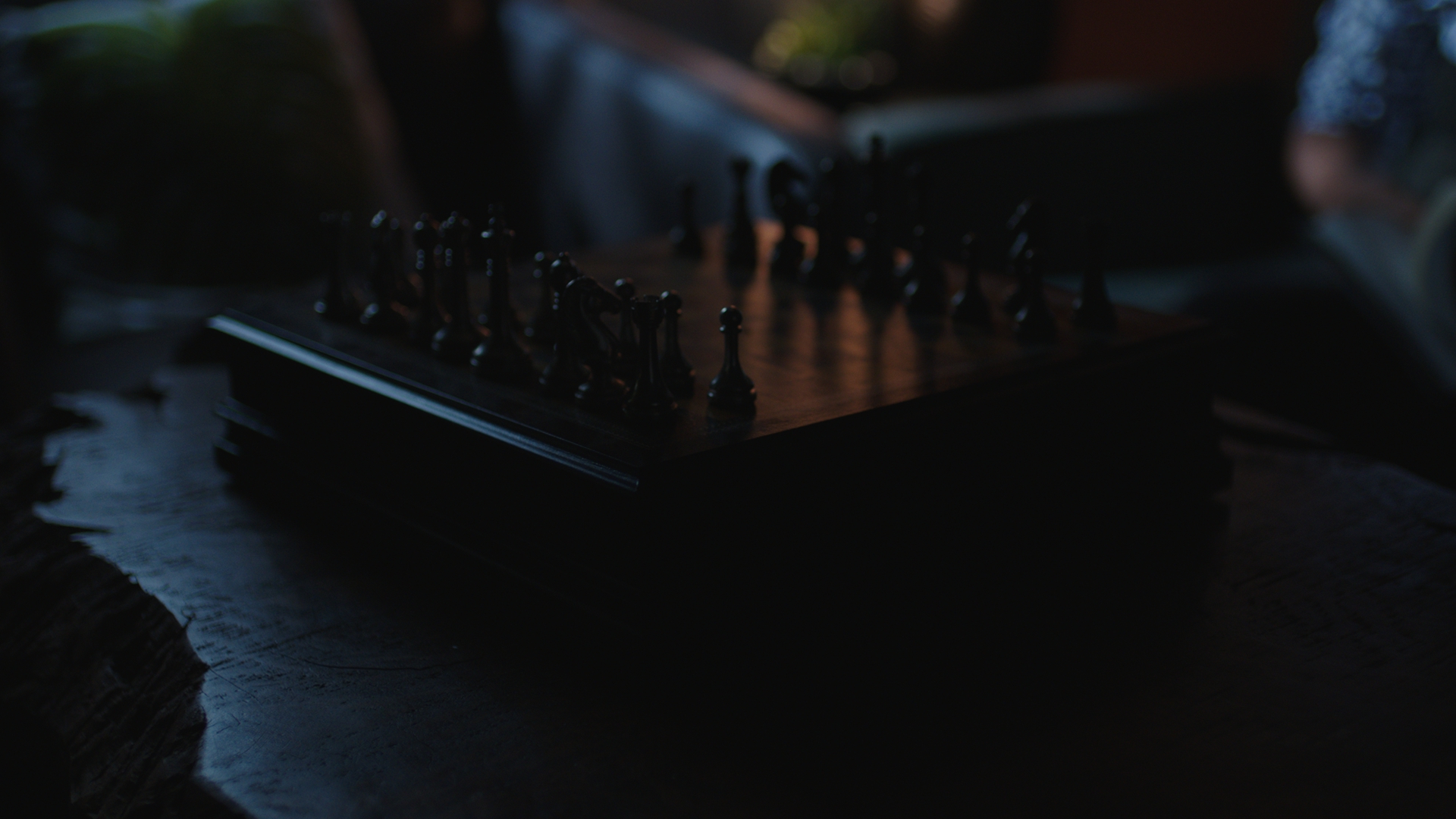 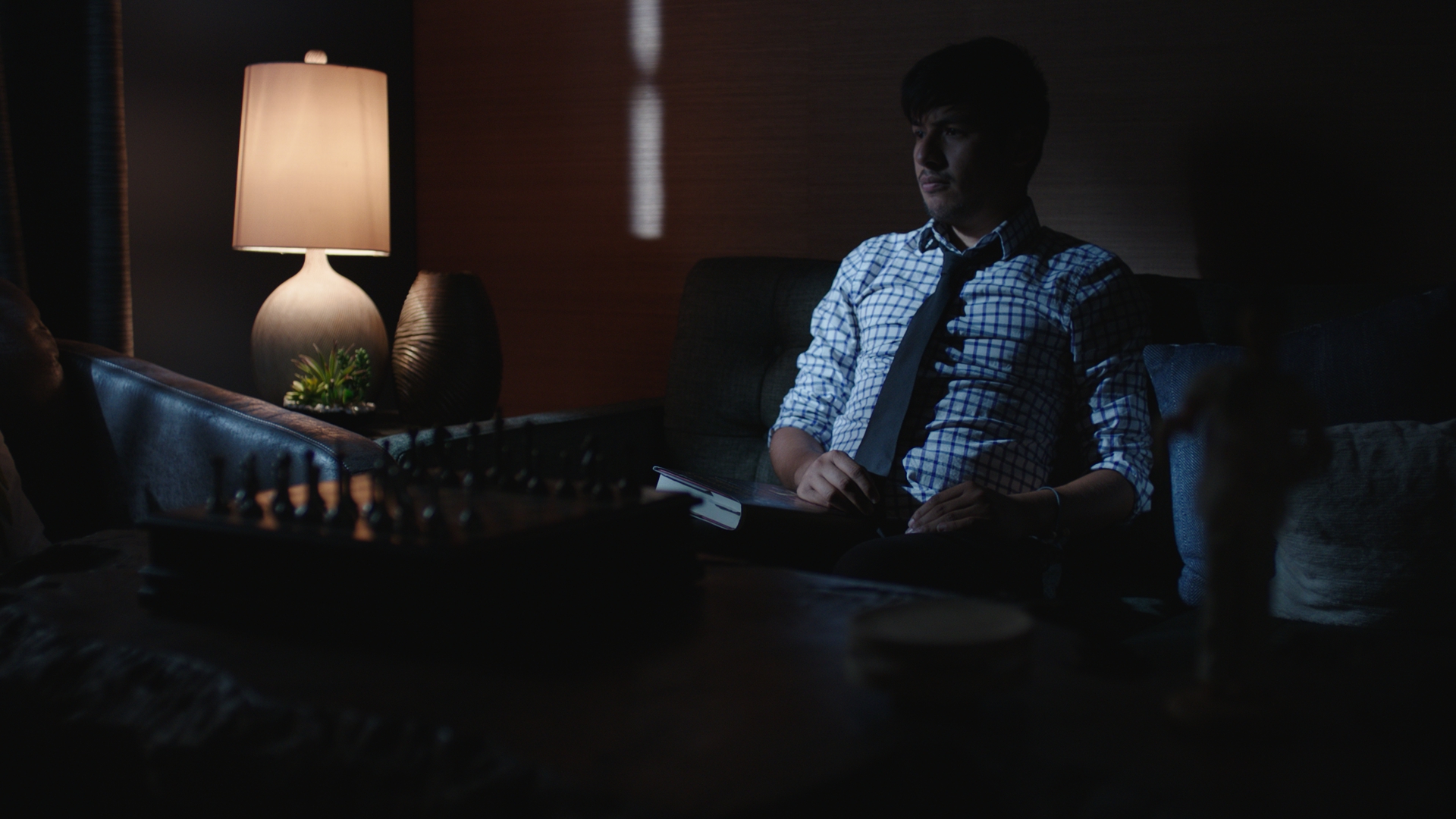 This is the same shot, but with the S60 turned off. The only lights working are the practical lamp and the LED fresnel. It’s fascinating that we can change the mood by turning off one light and changing the color of another. This is a solid night look. Once again, the warm/cool contrast is what makes this shot sing. 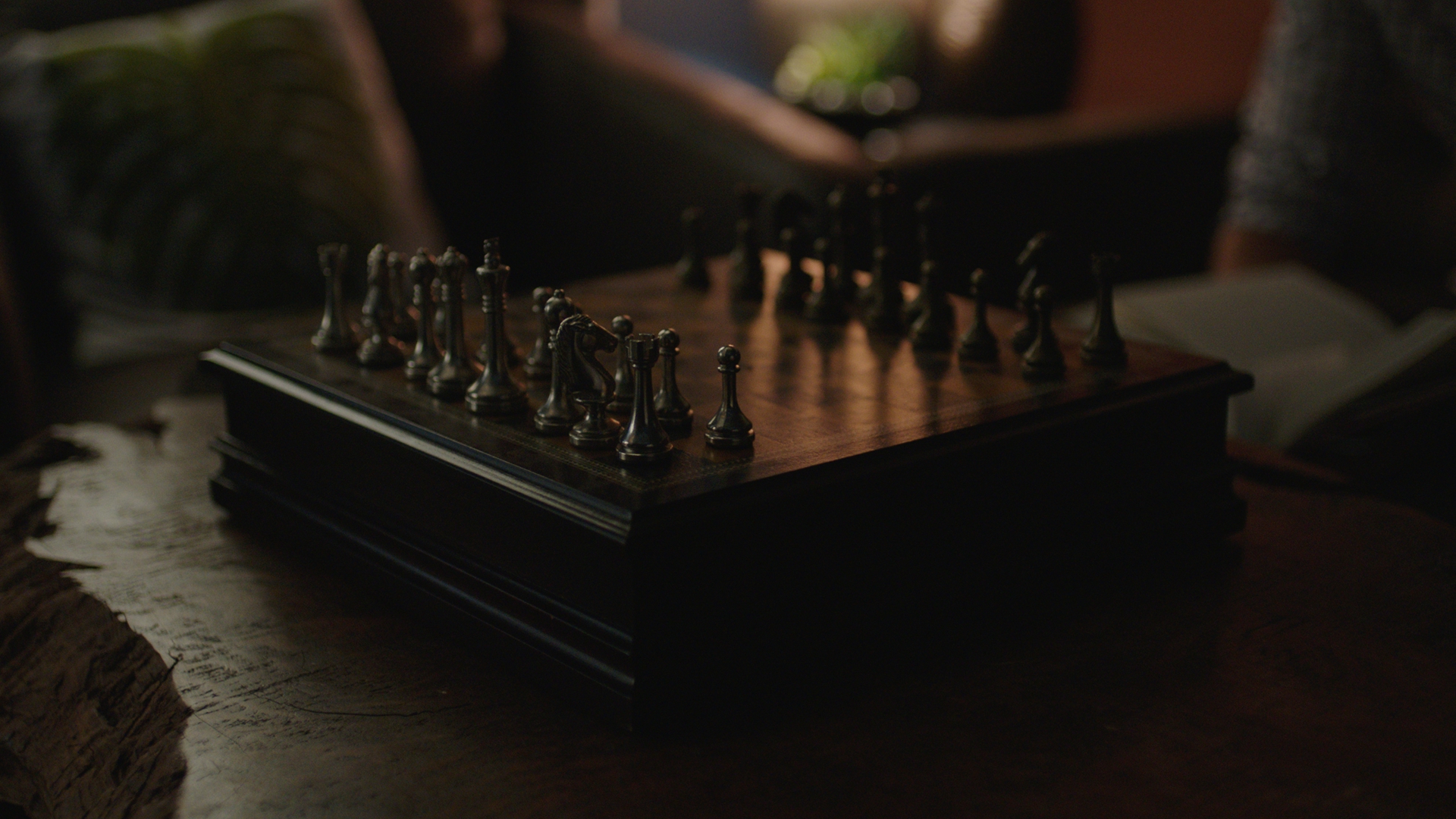 If you read my previous article you might notice how the bokeh in the background is interesting but doesn’t blend well. Chromatic aberration around the circumference of the disk creates a hard edge. The new ARRI Signature Primes do away with that artifact. 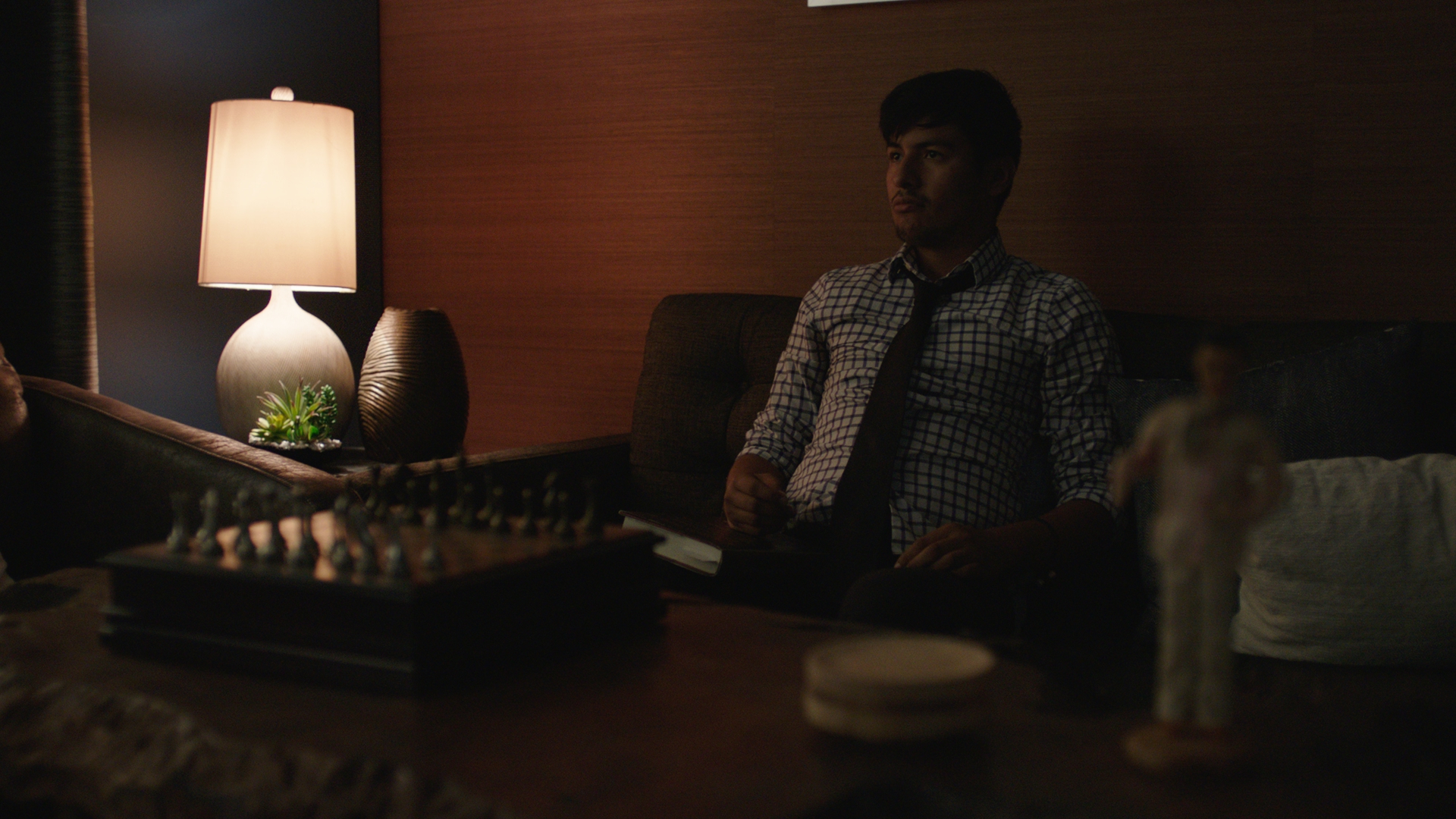 This setup takes us back to the beginning. The fresnel is off, and the S60 is on but warmed to match the lamp. To me, all the light feels as if it is coming from the lamp. It can’t be, because the lamp is to Leo’s side, but adding a soft source on the same side as the lamp creates that illusion.
We could also explain this soft fill as lamp light bouncing off the ceiling, although this set doesn’t have a ceiling. There could also be another table lamp off frame left. Only we know that this shot is light by one light, two bounce cards, and a table lamp within the frame. The effect isn’t stunning, but it feels real while flattering the subject and creating a sense of three-dimensionality.
We shot all these pieces within about an hour, and I’ve only pulled the best takes. I hope this shows how simple a lighting setup can be, and how fast it can change. The camera’s sensitivity and dynamic range make this possible, but it’s only a tool. It’s what we put in front of the lens that makes having the camera worthwhile.
Disclosure: ARRI pays me to work as a part-time trainer for the ARRI Academy. They did not pay me to write this article. I decided that the class footage was worth an article or two.
Art Adams
Director of Photography
Support ProVideo Coalition
Shop with