TV Technology Europe has recognized FOR-A as a recipient of the publication’s 2012 IBC Show STAR Awards for its FT-ONE full 4K high resolution variable frame rate camera. FOR-A, a leading manufacturer of video and audio systems for the broadcast and professional video industries, unveiled the FT-ONE earlier this year at Cine Gear Expo in Hollywood, while IBC 2012 marked the camera’s European debut. 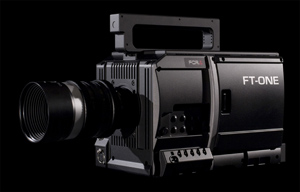 The STAR Awards (Superior Technology Award Recipient) honor products that help to advance the broadcast industry. The FT-ONE is the world’s first full 4K super slow motion camera, with the ability to record up to 900 frames per second. Harnessing the power of FOR-A’s high-sensitivity CMOS color sensor “FT1-CMOS”, the FT-ONE records and plays back full 4K (4096 x 2160.) One output channel can provide full 4K (four 1080p HD-SDI) outputs, while the other output channel provides down-converted HD-SDI for live viewing and play back.

“Showcasing the FT-ONE at IBC was very exciting for us, and we’re thrilled that TV Technology Europe recognized the innovative nature of this camera with a STAR Award,” said Mr. Hiro Tanoue, President of FOR-A Corporation of America. “It provides a capability that’s been missing up until now – recording super slow motion with full 4K resolution. With this camera rolling, operators can rest assured they won’t miss that critical action shot. We look forward to seeing the innovative ways it’s used in sports and digital cinema production.”

The FT-ONE captures images as uncompressed raw data on the system’s internal memory, which has a recording capacity of 9.4 seconds. This data is then stored on one of two hot-swappable SSD cartridges, each of which is capable of storing 84 seconds of full 4K resolution images. The FT-ONE camera uses a PL mount lens and the global shutter system. The camera is designed as a self-contained unit that is dependable and easy to use. It weights 8.5kg in a size of 235mm(W)x294mm(H)x384mm(D).

FOR-A is a major manufacturer and distributor of video and audio systems to the broadcast, postproduction and professional video markets. For more information about FOR-A’s product line, call 714-894-3311 or visit our web site at www.for-a.com.