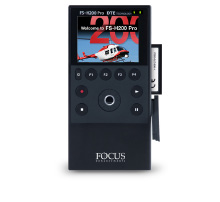 Campbell, CA. – December 15, 2009 — Focus Enhancements Inc, a worldwide leader in media management and digital audio technology, today announced the FS-H200 Pro portable Compact Flash DTE recorder. The FS-H200 Pro adds popular advanced features such as video playback on the unit’s color LCD, MPEG-4 proxy generation, wireless metadata logging, MXF HDV support (for Avid users) and much more. FS-H200 Pro is designed to be used with professional DV and HDV cameras and features a single card slot for easy swap out of industry standard Compact Flash (CF) solid-state media. Once recorded, user supplied CF cards can be easily mounted to both Windows and Mac systems either via USB 2.0 from the FS-H200 itself or via standard memory card readers for Direct To Edit workflow with popular NLE systems. Designed for use in the most extreme conditions including high temperatures (up to 50?C / 122?F), high altitudes, and extreme shock environments, the FS-H200 Pro performance is outstanding.

“Since we introduced our entry-level FS-H200 portable compact flash DTE recorder earlier this year, we have had many requests from end users for a fully-featured Pro model,” said Matt McEwen, director of product management for Focus Enhancements. “The FS-H200 Pro brings all the professional features customers have relied on with our other DTE recorders together with the outstanding benefits of solid-state performance.”