The Federal Aviation Administration released a new app, B4UFLY, to help unmanned aircraft operators determine where they can and can’t fly a drone. 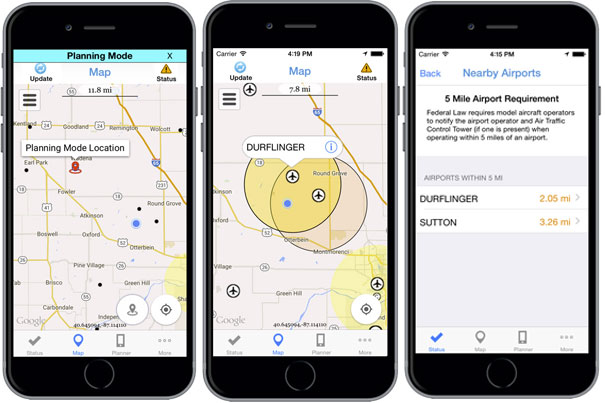 Released to 1000 beta testers, including members of industry, government, and the public, the B4UFLY is an easy-to-use smartphone app that helps unmanned aircraft operators determine whether there are any restrictions or requirements in effect at the location where they want to fly. It is important information for cinematographers involved with aerial videography.

Drone makers keep pointing out to users that they need to use some common sense when flying drones, and regulations in different countries start to define what can and cannot be done with drones, so it is foreseeable that things become more organized, although there will always be those that will break the law. The app from the Federal Aviation Administration (FAA) extends the information available to conscious users and is a step in the right direction.

Many unmanned aircraft users today have little or no aviation experience, and some of them are flying where they could endanger manned aircraft. B4UFLY will give these flyers the tools and knowledge they need to operate safely. Aimed primarily at model aircraft enthusiasts, the app is designed to give users information about restrictions or requirements in effect at their current or planned flight location. The FAA expects the beta test will yield valuable data on how well B4UFLY functions, as well as uncovering any software bugs.

FAA Administrator Michael Huerta first announced the initiative in May, asking for volunteers to test the app. The FAA has notified those who previously signed up and will be pushing the app to them directly in the coming days. This limited beta test is expected to run for several months, after which the FAA plans to make a final version of B4UFLY available for the general public. The beta version of the app is for iOS devices only, but the FAA intends to release a future version for both iOS and Android devices.

FAA states that “B4UFLY complements the Know Before You Fly educational campaign, which provides prospective UAS operators with information and guidance they need to fly safely and responsibly. The FAA is a partner in the effort with the Association for Unmanned Vehicle Systems International (AUVSI), Academy of Model Aeronautics (AMA), and the Small UAV Coalition.”

Using the location services feature of a user’s smartphone, the app quickly determines restrictions or requirements in effect where they want to fly and gives the user a clear status icon. The status indicator function considers airspace, proximity to airports, temporary flight restrictions, current law and other FAA guidance and procedures.

Model aircraft operators who fly within five miles of an airport are required by law to notify the airport and the air traffic control tower – if there is one at the airport – prior to operating. The FAA is working on an electronic notification process to satisfy this requirement that will become part of a future version of B4UFLY. During the beta test, the FAA will collect user feedback and operational data and use it to develop this electronic notification process.

Key features of the B4UFLY app include :