Renowned entertainer Donny Osmond will deliver a keynote address at the NAB Show Radio Luncheon, sponsored by ASCAP, on Tuesday, April 17 in Las Vegas. Osmond, who has entertained audiences for decades as a singer, musician, actor, dancer and former teen idol, is also a syndicated radio host for McVay Syndication in a partnership with TeshMedia Group. Osmond will discuss how radio has impacted his career over the years. 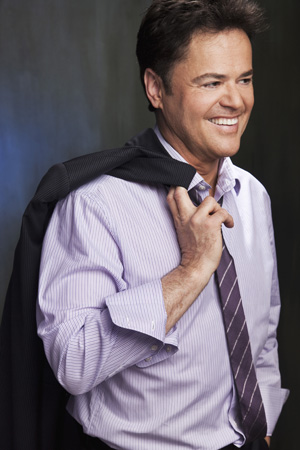 “As an accomplished performer and on-air personality, we look forward to hearing Donny’s perspective on radio,” said NAB Executive Vice President of Radio John David. “His unique ability to connect with audiences is sure to energize attendees at the Radio Luncheon.”

Since 2010, Osmond continues to host two internationally syndicated radio shows: The Donny Osmond Radio Show and Donny’s 8-Track Playback. Formatted to fit both Hot AC and Classic stations, his lifestyle-driven music radio show delivers helpful and insightful information to listeners who are looking for “a friend to help them through the day.”

In addition to his daily radio show, Osmond performs nightly with his sister, Marie, at the Las Vegas Flamingo Hotel in a show that is in its fourth-straight year running. Osmond also participated in, and won Dancing with the Stars: Season 9. His recently released 59th album, Donny & Marie, features a mix of country, rock and love ballads, including the number one hit single “A Beautiful Life.”

Osmond’s musical career began at age five. He quickly rose to fame, touring the world with sibling music group, The Osmond Brothers. His success continued as he co-hosted with his sister a wildly successful variety show, The Donny and Marie Show. As a solo artist, Osmond’s music career received a boost when he recorded “Soldier of Love,” which topped the Billboard Pop Charts at number two. In total, Donny has sold more than 80 million records over five decades and received 33 gold records.

The NAB Show Radio Luncheon will include the 25th annual presentation of the prestigious NAB Crystal Radio Awards, which honor local radio stations for community service. Also, Mr. Baseball, Bob Uecker, will be inducted into the NAB Broadcasting Hall of Fame.

About the NAB Show

The NAB Show, held April 14-19 in Las Vegas, is the world’s largest electronic media show covering filmed entertainment and the development, management and delivery of content across all mediums. With more than 90,000 attendees from 151 countries and 1,500+ exhibitors, the NAB Show is the ultimate marketplace for digital media and entertainment. From creation to consumption, across multiple platforms and countless nationalities, the NAB Show is home to the solutions that transcend traditional broadcasting and embrace content delivery to new screens in new ways. Complete details are available at www.nabshow.com.