Companies will work to create grading and control dailies workflow 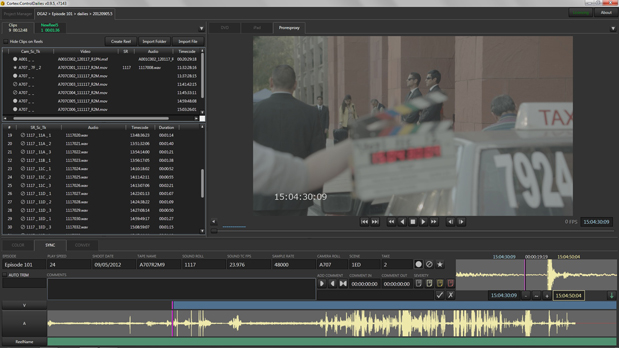 Digital Vision and MTI Film have formed a strategic technology partnership to develop a new digital dailies software solution, built upon Digital Vision’s Nucoda colour grading system and the MTI’s Cortex::ControlDailies solution. Introduced this morning at IBC in Amsterdam, the announcement marks the development of a previously unavailable dailies product in the marketplace, built upon two powerful technologies.

Nucoda Look with Cortex::ControlDailies will soon be available as a software package that offers a unique set of integrated features to enable users to seamlessly move the Cortex grades into the Nucoda Look for more precise and controlled “near-set” grading and preparation for final grade. The new package pushes the boundaries of the digital dailies process by offering a simple and powerful production process from set to final colour grading.

In addition to their on-set dailies offering, MTI Film Los Angeles is a leading post production facility serving motion pictures and television projects for major studios and networks, with multiple Nucoda Film Master systems at the center of their colour operations. Recently, they provided remote control dailies for Warner Horizon Televisions’ reboot Dallas. It was during that project, where dailies were moved into Nucoda for final ultimate grading, that MTI Film and Digital Vision were propelled to form the new alliance.

Larry Chernoff, CEO of MTI Film commented, “We have worked closely with the team at Digital Vision for many years, and have found them to consistently bring creative ideas to every project. This partnership is a continuation of our successful collaboration, and we see it as an important service and product for anyone that hopes for powerful colour coherency from day one of dailies to the final delivery.”

Kelvin Bolah, Managing Director, Digital Vision says, “Our intention is to provide a cost effective high-end solution for on-set and near-set dailies that benefit our clients by combining the best experience with MTI’s dailies processing and the industry’s best colour correction solution.”

Digital Vision is the supplier of the world’s best colour grading, restoration and film scanning solutions for the broadcast, film, commercial and archive industries. Founded in 1988 in Stockholm, Sweden, Digital Vision has offices in London, Los Angeles, New Zealand, and Linköping in Sweden. Digital Vision’s Emmy award winning technology and products include Nucoda and Phoenix colour grading, finishing, mastering and restoration solutions that are used to create much of the worlds’ high profile television, film and commercials media broadcast and distributed today. In addition to the Nucoda and Phoenix ranges, Golden Eye film scanners and the Vintage Cloud solution provide innovative tools to create the industry recognized highest quality in scanning, film digitization, preservation and archiving.
In April 2011, Digital Vision acquired Image Systems and is now a division of the Image Systems group of companies.

All trademarks used herein, whether recognized or not, are the properties of their respective companies

Since 1997 MTI Film has provided award winning software applications to the post-production industry with a focus on technology for digital film restoration and digital dailies. With strong ties to our customers and an in-house services arm providing real-world, real-time development experience, MTI Film offers the most advanced, efficient and user-friendly applications on the market. MTI Film products include
Correct DRS(tm) Control Dailies and Convey, and introducing the Cortex family – a simple, powerful and coherent digital workflow solution from pre-production through post-production.