DaVinci Resolve is getting a major upgrade in July… the kind that includes 80 new features.

Sometimes announcements and updates are missed, hidden in the shadows, or just plain over-looked.  After soaking in the URSA Mini and a new 4.6K Sensor the update to DaVinci Resolve came to light for me.  It’s not very often an update makes me rethink my post-production workflow, but then I watched Blackmagic’s video highlighting the upcoming changes: 80 new features.  Mulit-cam editing.  3D perspective tracker. Color Matching… honestly the updates are too much to write out in one article.  So I’m going to let the press release take over.

DaVinci Resolve 12 features a new, modern interface with a lighter overall color scheme and new fonts that help reduce eye strain and make it easier to work for long sessions. The new interface is scalable and has been 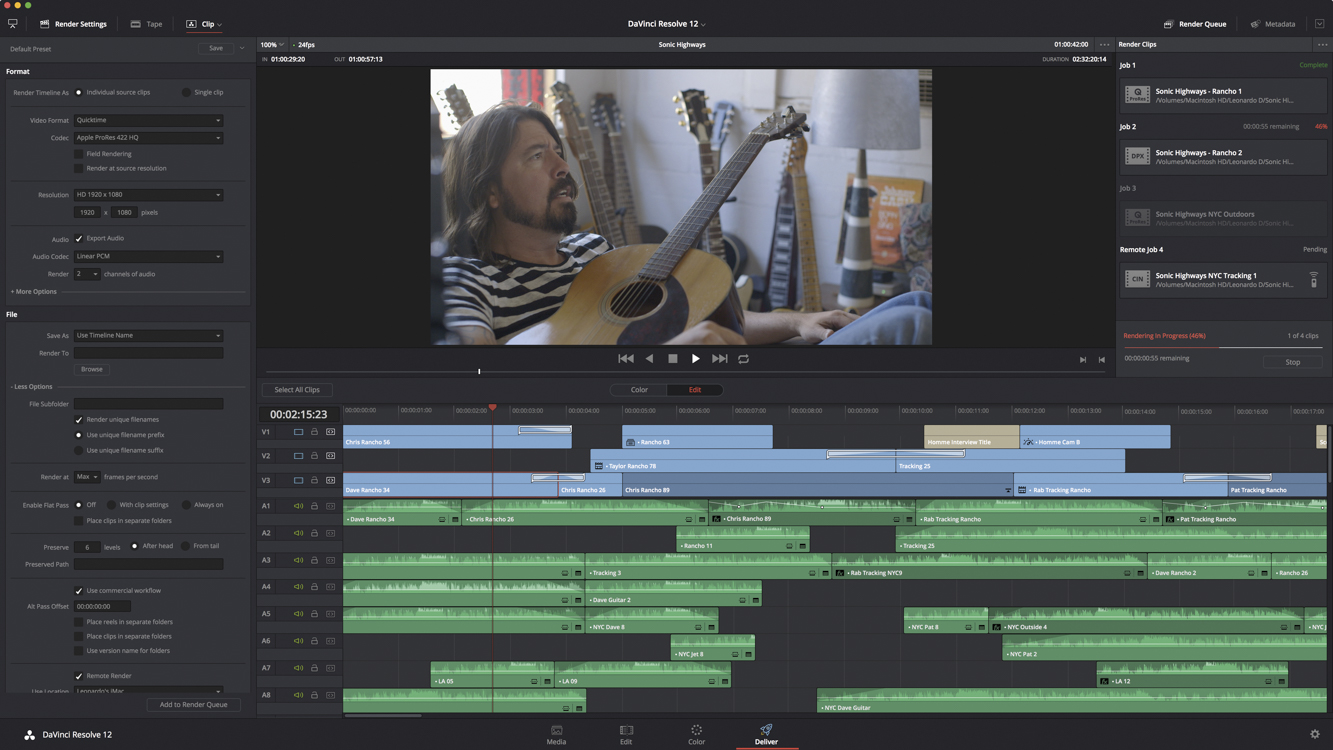 designed to look great on high DPI monitors, such as retina displays. New top down navigation speeds up layout selections and also gives users more flexibility to customize their workspace.

The new multi-camera editing feature of DaVinci Resolve 12 lets editors cut programs from multiple sources in real time. DaVinci Resolve 12 can synchronize camera angles based on timecode, audio waveforms, or in/out points. The source monitor displays a grid containing the camera angles and plays them all back in sync while the editor makes cuts to the audio and/or video.

In addition to multi-camera editing, DaVinci Resolve 12 also features several enhancements to the core editing tools. All trim modes, multi-slip, slide, ripple and roll have been extended and editors can now select multiple points for dynamic trimming and asymmetric trimming of clips, even if they’re on the same track. Timelines can be nested, edited together and expanded or collapsed in place to greatly simplify editing of large multi scene projects. New transition curves let editors create and edit custom curves for transition parameters and new on-screen controls let editors see and adjust motion paths directly in the timeline viewer.

DaVinci Resolve 12 includes an entirely new, high performance audio engine that offers higher sampling rates and greatly improved realtime audio playback performance, including reverse playback and tape style slow motion scrubbing during dynamic JKL trimming. Both VST and AU audio plug-ins, along with their custom interfaces, are now supported and can be used on individual clips or entire tracks. Audio parameter adjustments can be recorded and now contain editable automation and full curve editor support. For the first time, editors will be able to export projects directly to ProTools via AAF for audio finishing. 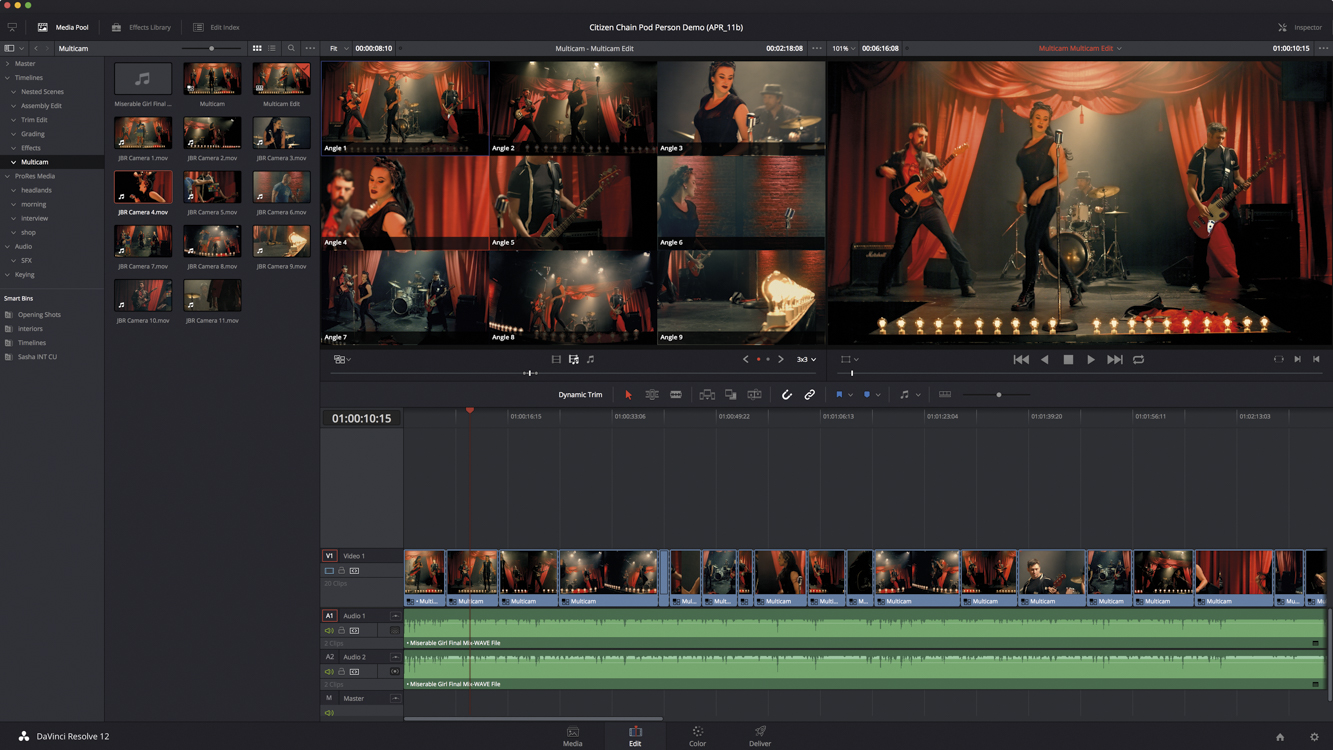 Media Management in DaVinci Resolve 12 has been redesigned to accommodate editorial workflows. Customers can now manage projects and media using new copy, move, transcode, relink and consolidate tools. Whole projects, including media can be archived and restored with ease. Resolve 12 makes it easier to find media in large projects by letting users create smart bins that can display footage based on metadata tags. Users can now import media by simply dragging it in from the Finder or Windows Explorer, or by using new “Favorites” for one click access to commonly used media folders on disk.

DaVinci Resolve colorists will find incredible new tools that give them even more creative grading options than ever before. Resolve 12 improves upon DaVinci’s legendary advanced color science by adding support for DaVinci’s own color managed timelines as well as ACES 1.0 transforms, making it easier to get consistent results, especially when working in facilities with managed pipelines.

The core grading and color correction tools have also been improved with a new, easier to use curves interface, automatic color analysis and matching between two or more clips, an incredibly accurate 3D perspective tracker, and a new 3D keyer with improved matte finesse options. Colorists can now define their own smart filters, convert any window to a bezier, collapse multiple nodes into compound nodes to simplify their view, ripple grades across multiple clips, and flatten pre and post-group grades into a clip’s individual grade.

DaVinci Resolve 12 also now supports remote rendering so customers working in larger facilities can distribute rendering jobs to other Resolve systems that are on the same shared database and shared storage.

With dramatically improved editing, DaVinci Resolve 12 now has the ability to integrate with other NLEs even better. Edit timelines can “round trip” to other editing software and more of settings, plug-ins and edits are preserved. For example when importing XMLs from Final Cut Pro X, DaVinci Resolve 12 can now import multi-cam clips and preserve all the original camera angles. Also, audio support is greatly improved to match the audio timeline in Final Cut Pro X. This makes collaborative workflows better and allows different people in a facility to use the tools they prefer instead of being forced into an inflexible company wide platform.

“DaVinci Resolve 12 is an incredible release that we think both editors and colorists are going to love,” said Grant Petty, CEO, Blackmagic Design. “We’ve built in the features customers have been asking for and, with the addition of multi-cam and some of the other great new editing features, we think that Resolve is perfect for both creative editing and finishing. It’s still the only system that lets customers switch from editing to grading with the click of a button, giving them the fastest, highest quality no compromise workflow. Best of all, customers can install DaVinci Resolve Lite and use it on real projects for free. There is no monthly subscription, you don’t need to be connected to the cloud, and you don’t need to buy any proprietary hardware!”