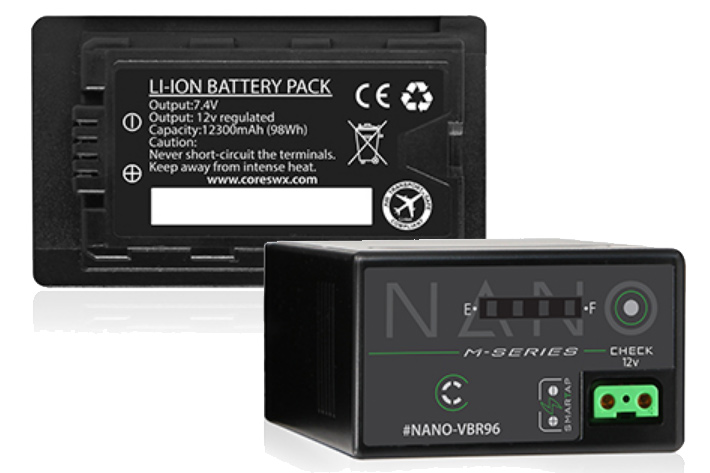 Weighing in at 0.9 pounds, with a capacity of 98wh and offering a 12v power tap, the Nano-VBR98 is a new 7.4v battery from Core SWX. The battery and the new family Nano-M will premiere at NAB 2018.

Core SWX introduced last October its compact Hypercore SlimHC8, a small battery able to detect motion and hibernate, a regular feature in the Hypercore family of batteries. Now the company is back with another product to expand its growing line of solutions for cinematographers: the Nano-VBR98.

The new battery retains the original Nano capacity with a redesigned form factor that makes it suitable for select Panasonic cameras, such as the Panasonic AU-EVA1. The pack is equipped with a 4-stage LED power gauge and a power tap. The Nano-VBR98 has a typical runtime of five hours off of Panasonic EVA1 draw and charges on Panasonic chargers. With a capacity of 98wh and weighing in at 0.9 pounds, the Nano-VBR98 is a 7.4v battery pack with a 12v power tap (2A max load). 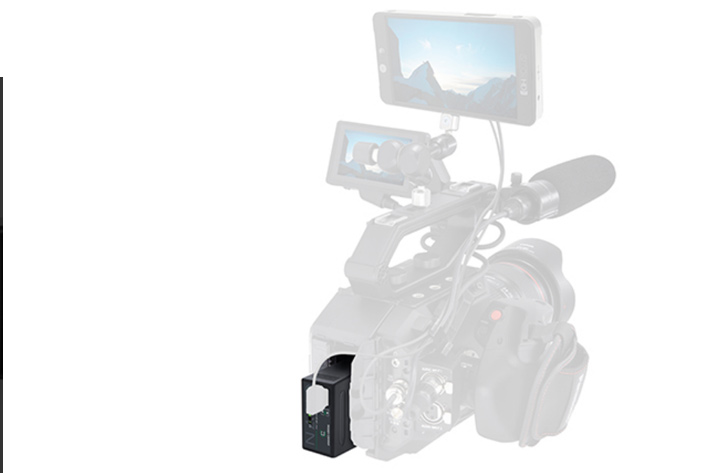 “The on-board 12v power tap is a key element in production, allowing you to power on-camera accessories, such as transmitters and monitors from companies like Teradek, SmallHD and Zacuto,” says David Isaacs, Strategic Channel Sales, Core SWX.

Core SWX is a market leader in batteries and charging solutions for the digital cinema and the professional video industries, along with emerging markets such as drones and virtual reality, areas where small batteries are essential. Compatible with leading professional and consumer manufacturers, such as Sony, Panasonic, Canon, RED, Blackmagic Design and more, Core SWX products as the Hypercore line of batteries, remain at the forefront, providing the power to create in a variety of applications. The Nano-M series, which addresses the need for a more “pro” style option of power for Small Form Cine cameras, is now a growing name within the lineup from Core SWX.

“We recognize that a large segment of filmmakers are utilizing ‘small form’ cine cameras, yet they’re relying on battery packs that are intended for the consumer market, or being forced to rig their cameras to use V-mount or Gold Mount battery power when powering accessories,” says Ross Kanarek, CEO, Core SWX. “We’re taking our Nano brick battery technology and repurposing it into a smaller form to address that segment of cine cameras. Utilizing the premier lithium ion cells in the market from Panasonic, insures this product will withstand the demands of video production.” 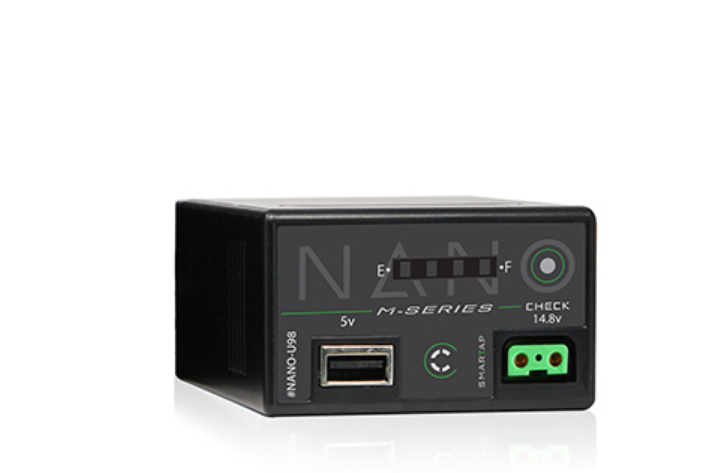 The Nano-VBR98 is the first battery pack to offer Core’s patent-pending SmartTap protocol. This will allow future integration with devices to utilize the smart battery data in the pack, another feature that until now, was only offered in premium brick battery packs.

“We see this product as the start of a new segment within the professional video battery market,” says Kanarek. “The resulting product is something Core is very proud to offer.” Additional Nano-M batteries, including the Nano-U98, designed for Sony will be available in late February, and a Canon model will be available in April.

The Nano-U98 is specifically designed for select Sony PMW/PXW camcorders such as the Sony FS5. They are equipped with a 4-stage LED gauge, P-tap, and USB port. The P-Tap is a Smart Tap that is able to carry SMBUS/smart battery data which is a featured part of future integration. This power tap will serve as a standard powertap without need of special cabling.