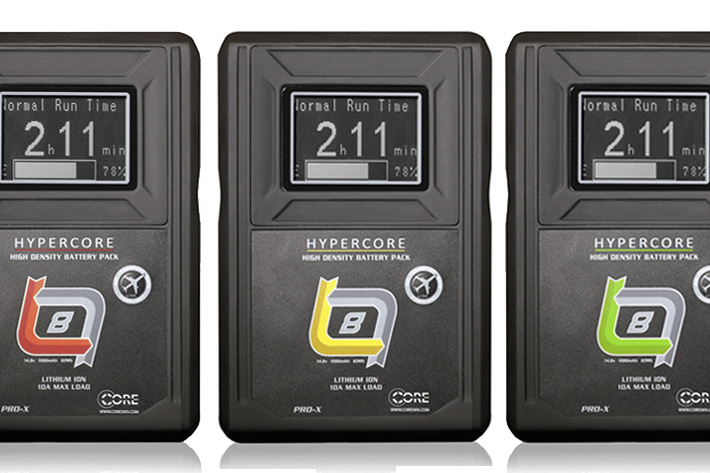 A battery that detects motion and hibernates means users have more energy available when they need it. That’s one of the assets of the compact Hypercore Slim HC8, and a regular feature in the Hypercore family of batteries.

Core SWX says that “the Hypercore SLIM series was developed to provide the best in Lithium Ion technology for UAV, handheld gimbal and all other applications demanding a low-profile battery pack. We transformed the SLIM HC7’s into a work of art with the new HC8 battery packs. From a more angular design, to a new low profile LCD bezel, the HC8’s offer the most compact, slim, and sleek design in the industry today. The Hypercore SLIM series is the first line of slim battery packs capable of handling high draws up to 148w (10A) without deterioration in service life nor operablility, perfect for powering cameras ranging from RED to ARRI.”

“We have previewed the HC8 at several trade shows and the demand for it has been at an all-time high,” says Jose Flores, Sales Manager, Core SWX. “The HC8 is the most compact, trim design in the industry and is perfect for UAV or other scenarios where a small form factor is needed to power cameras, such as RED and ARRI, with its draws up to 148Wh.”

A LED backlit runtime LCD on the front of the HC8 battery pack lets users know how much battery time is left when in use and will also show remaining charge time while connected to a charger, allowing users the opportunity to plan out their shoots down to the minute. The battery’s cells are incased in an over-molded, rubberized housing, providing additional protection against accidental impacts that may occur when operating alongside UAVs. Like the Hypercore Prime, this 85Wh battery pack is safe and legal for air travel. The HC8 is available in V-mount, 3-Stud mount and V-mount RED to communicate exact remaining battery capacity to the RED camera’s LCD/VF.

As with all products within the Hypercore series, the HC8 is outfitted with an accelerometer to detect motion. This causes the battery packs to hibernate when there is no usage or movement after a 48-hour period. Once the battery is back in use or detects the slightest movement, it awakens at its maximum capacity. Like all Core SWX battery offerings, each battery in the Hypercore series has an integrated P-tap connection on its side that lets users power any 12-volt DC device. Hypercore battery packs are also the most charger-compatible in the industry today. Not only do the batteries charge on any charger within the Core SWX lineup, but the V-mount offerings will charge seamlessly on RED, IDX and Sony chargers. The 3-Stud products will charge on Anton/Bauer chargers firmware V3.6 and up.