One of the advantages of NLEs is how quickly you can mix files and create a final work. One of the problems is when you find a mistake in the final copy and need to correct it, reexport the whole file and do some QC. One program may be your best bet then: cineXinsert from Cinedeck! 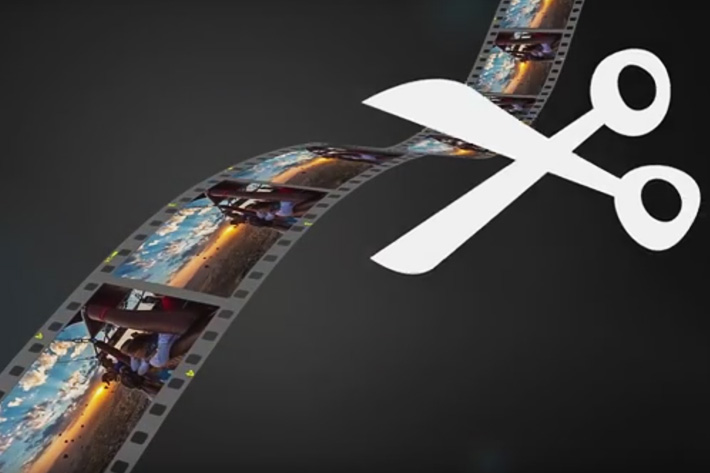 CineXinsert, which I like to think of as digital scissors, is a modern tool that treats your file as if it was a tape from the old days of linear editing. It allows you to accurately replace content in a file, based on timecode in and out points – pretty much just like working on tape.

For those that come from tape days, using cineXinsert will be a bit like going back to those times, with the magic that all this is done digitally, in your Mac computer (yes, the program is Mac only), but through an interface that for some will be familiar: the player/recorder used to change video and audio on tape. Only here the base material you’ll work on is the flat file that otherwise had to be corrected and go through the entire export and QC process – throwing away hours, possibly days of additional time and resources.

Instead of facing time-consuming and costly work to make even the simplest correction to a file, you can, says Cinedeck, “directly access and change flat, exported files, helping to save you hours, sleep, hair and $$$.” In a normal situation, without cineXinsert,  continues Cinedeck, “you go through a time-consuming and tedious process to create a final deliverable file. In the best and most streamlined situations, you edit a program with your non-linear system, export the program to a flat file, QC the file, find and fix an issue and repeat the entire process. Larger facilities tend to have even more complicated workflows, which integrate additional steps like first laying off to tape to help isolate problems and reduce workload in the QC phase.”

With cineXinsert in your toolbox, if an error is discovered, instead of a massive multi-step dance to produce a new corrected deliverable file, you simply create a small file containing just the elements you need to replace. The process is simple: you open that file in the cineXinsert Player, load the show file in the cineXinsert recorder, set the edit points and place the new correct content over the old wrong content, and you are done. A multi-hour re-export and QC process was just reduced to a few minutes! Yes, that’s how magic the program is, according to Cinedeck.

CineXinsert understands where content is located in the files – somewhat the same way a tape machine understands where frames reside on a tape, allowing you to accurately go in and replace that specific video or audio content.This eliminates massive backwards steps and cineXinsert can streamline the deliverable process by allowing you to create files with up to 32 audio tracks, bypassing the 16-track limitation of SDI.

CineXinsert can reduce a multi-hour or multi-day re-export and QC process to just a few minutes by editing new content directly into an exported ProRes, DNxHD, AVC-Intra, XDCAM-HD, or JPEG 2000 file! It means that instead of re-exporting an entire program after making a change in your non-linear system, you export only the changed section – just the minimum of required content.

Imagine that once you’ve finished a job, QC finds that someone’s name is incorrect, and you need to correct it. With cineXinsert you need just the 7 seconds of the interview that contains the corrected lower 3rd title. Of course, rendering out 7 seconds from your NLE is much faster than rendering out the entire hour. Once you have created a small file containing the required new content, the insert process is easy, using an interface similar to a typical non-linear edit system:

What is particularly amazing, says Cinedeck, “is that because you are working entirely in a file-based domain, the insert happens at the speed of light – well, the speed of your processors, bus and drives which in any case is significantly faster than real-time.”

Cinedeck’s cineXinsert currently supports Apple ProRes, Avid DNxHD, AVC-Intra, XDCAM-HD and JPEG 2000 files. The content can be contained in a MOV (quicktime), MXF OpAtom or MXF Op1a wrapper and the files to be edited can be from anywhere. Also, insert edit is resolution independent so cineXinsert can insert new content into your flat SD, HD, or 4K file.

The program can be used with any Mac computer. The only real requirement is that it needs to be running OS X 10.9 {AKA Mavericks} or newer. CineX programs also needs a license on an iLok Second Generation USB Smart Key device. This is the same device used by Avid and many other companies and the keys can hold many licenses. CineXinsert costs $1,495.00.

Here is a list of features present in cineXinsert: 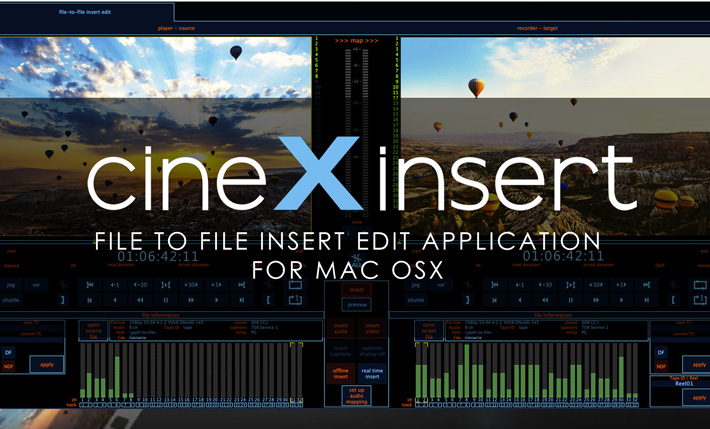 As for the future, Cinedeck promises more amazing things to come. CineXinsert’s, which is the first tool making up the cineX family of NLE companion tools, addresses a longstanding limitation in digital production and is designed to be used on files from many sources, including content created on a Cinedeck.

The program will be one of the stars of Cinedeck’s presence at IBC, in September. There will be live demonstrations of cineXinsert and the opportunity to see how this NLE companion is developing to become an essential tool for everybody. There is even a chance to suggest features that Cinedeck should add to this and their other cineXTools. If you can not go to Amsterdam, there is still a chance to see and even test the program, as the option to request a demo is present on Cinedeck’s website.