Not everything at Cine Gear Expo is a camera

Cine Gear Expo, the two-day show on the Paramount lot in Hollywood, is the best place to see industry tools, many of which you’ll be hard-pressed to find at NAB or IBC.

Yesterday I covered Cine Gear’s three big camera-related announcements; today I’ll look at some of the other interesting things I ran across or that people steered me to.

It was a toasty weekend in L.A., and this hydra-headed ductwork in Stage 14 helped keep things from getting too hot. See? I promised you “cool stuff”, and I delivered! <rimshot> Thank you, thank you, I’m here all week…

Alexa 65 is ARRI’s large-format, rental-only camera. The 2.11:1 aspect ratio sensor is 54.12×25.58mm and packs 6560×3100 photosites (by comparison, a “Super35mm” sensor is typically less than 25mm wide and 14mm high). Yes, it’s bigger and  heavier and its sensor captures a prodigious amount of data, but its control layout, menus, and workflow are just like those of an Alexa XT. Why mess with success?

A swatch book for looks? The ARRI Look Library is a complete set of 87 Alexa Mini /Amira Premium LUTs spanning a wide variety of looks, and it comes with a swatch book: each look is shown on a head shot, a street scene, and a car image, so you and your director can pick a look you like and load it into camera. Looks come in three different strengths and are tweakble, too. Alexa Minis and Amira Premiums shipped after May 1st already include the Look Library; you can upgrade earlier cameras (once they have SUP 5 installed) for around €280 if I recall correctly. And there’s even an iPhone app—no camera necessary if you just want to, uh, take a look (pun intended).

The Fujinon booth included a lens projector and Matthew Duclos of Duclos Lenses described how to use a projector to evaluate lenses.

While resolution measurement, brightness falloff, and image circle are easily understood, the projector holds surprises. Any geometric distortion you see on a projector is the inverse of what you’ll see while shooting with that lens: if the projector shows pincushioning, you’ll get barrel distortion instead. It makes sense when you think about it—the projector pushes the light of a rectilinear reticle out through the lens, the camera pulls the light of the real world in.

Carpetlight: the name pretty much sums it up. It’s an array of dimmable bi-color LEDs (daylight/tungsten) on fabric, using conductive threads for power. You can hang it, drape it, even tie it in knots, as with that drape on the right side of the booth.

Hive Lighting has been providing power-efficient plasma lighting for a while, but the new-this-year WASP 100-C is a 5-color LED fixture. It’s fully dimmable, white-light tweakable from 1650K–8000K (plus any saturated color you’d like in 6º increments), and can be set up manually or over DMX.

You can fit a variety of lenses, reflectors, Chimeras, and other light shapers. The unit runs very cool. It’s about $1000.

LightBlade LEDs are a co-production of NBCUniversal and Cineo Lighting. From the press release:

At Cine Gear, three different NBCUniversal LightBlade configurations will be on display:  the LB50 stand-alone linear source, the LB1K, an integrated 4′ x 4′ soft source, and the LightBlade Ladder Light, which continues the familiar form factors of NBCUniversal’s backdrop lighting system. The lightweight 1.5″ x 48″, 50 watt light engines are designed to operate in a variety of physical layouts, including stand-alone operation.  NBCUniversal LightBlade products are versatile, lightweight, silent and flicker-free, and built to endure the wear and tear of staging and production.

NBCUniversal LightBlade products feature reference-quality variable white light from 2700K to 6500K. They have superior color rendering with typical CRI>90, R9>95, and a saturated color engine that works creatively with high-CRI white light. Additional products are being developed for use on location and on stage.

Yes, there’s a website, but at press time it only had three bullet points and a phone number. Presumably there will be more posted once products get closer to shipment.

And it wasn’t just LightBlade and the WASP; high-output, high-saturation, variable-color (yet tunable for “white” light) LEDs in sticks, tubes, blobs, and panels were all over the show.

I always get a kick out of Redrock Micro’s Retroflex rigs. They convert small, EVF-less hybrid cameras into eye-level Super8-styled shooters.

The S.O.C. gave loading demos on a Panaflex Platinum. Film loading is still a useful skill… but for how much longer will that be true?

I’m usually ambivalent about Zacuto rigging, but they’ve done it right with this GH5 cage. With the accessory shoe unavailable (it’s where the GH5’s XLR adapter attaches), many hybrid camera cages use the 1/4″x20 tripod socket as their sole mounting point, with perhaps a couple of additional points of contact to keep the camera from rotating. But that’s not enough to prevent “oilcanning”, the flexing of the camera on its mounting point. What to do?

Zacuto adds two more hardpoints, bolted to the carry-strap eyelets, for a rigid three-point mount. That is how it’s Supposed To Be Done. As a bonus, the right grip is left unobstructed for a comfortable handhold; you can fly the caged GH5 at eye level about as easily as an uncaged GH5. Well done.

Mark Weingartner told me he thought it was likely the most significant advance in Steadicams since, um, the original Steadicam itself. I tend to agree.

I don’t know what it’s really called, but this odd rig captures the P.O.V. of your chin and feeds a Codex recorder on a backpack frame. It’s the sort of oddball rig that Radiant Images seems to specialize in.

SmallHD and Boland were showing field monitors in full sunlight.

I should also mention that Canon showed two HDR displays—inside, not in sunlight—including one that peaked at 2000 nits and could maintain that level across the entire screen, without dimming. Freaking gorgeous—as it should be, for $50,000.

Canon ran an HDR demo reel in which every single shot was properly graded: high brightness and wide color were used as accents, and no shot was “turned up to 11” just because it could be. Seeing HDR used with that level of restraint gives me hope for the future.

I pixel-peeped the lens on the GH5 using focus mag. Plenty of character, but not too much. Not quite as crisp as a Cooke but consistent at all apertures, so you won’t need to stop down for sharpness. That means plenty of shallow-focus, wide-aperture oval bokeh to enjoy. PL or EF mount, interchangeable. And if that’s not enough, three additional focal lengths are under design, too. Sweet.

Acromove is the new identity for Athens, Greece-based Motion FX. The ThunderPack line is a range of DIT-cart-in-a-Pelican-case products: power, storage, I/O, and networking in a robust carry-on form factor.

This particular pack runs full-tilt for about six hours on battery power alone while driving a MacBook Pro, LTO drive, and card reader. With the solar panel for trickle-charging, it’ll  run all day long. You can also feed it AC if you have that luxury.

Panavision demonstrated an HDR EVF for the Millenium DXL camera. The OLED EVF peak around 600 nits and can maintain 300 nits across the entire screen. It looks fabulous—more importantly, it brings the HDR viewing experience directly to the camera, so the DP or operator can see the effect that really bright wall sconce in the background has on the perception of the picture.

Panavision also showed their PX-Pro color spectrum filter, the spectral shaping filter—doing things like cutting excess IR—used in front of the sensor. The PX-Pro uses absorptive dyes, not reflective layers, so it’s much less prone to angular color shifts, as the demo above shows. Panavision extols the PX-Pro’s characteristics of making “colors appear smoother and have more transition with less red contamination. This is very helpful in tertiary and complex colors in skin tones as well as improved transitions in lens flares and shadow-to-light gradients.”

Both the HDR EVF and the PX-Pro are used on the Millenium DXL, Panavision’s large-format production camera introduced last year. Michael Cioni tells me there are now “several dozen” of these cameras in daily use.

DJI’s new Spark drone was a crowd-pleaser with its gestural interface. The $500 Spark is more of a consumer item than a pro cine tool, but it was still fun to see it respond like a well-trained dog, rising and falling on command and settling gently onto an upturned palm.

RED was in Stage 2 along with DJI and Panavision, and RED is probably why there were waiting lines to get in; the fire marshal didn’t want an overcrowded venue.

AirHollywood brought an aircraft cabin to the Paramount lot.

Yes, it’s a cabin built onto a flatbed: why go to the set when you can have the set come to you?

If you’re prefer to go to the set, AirHollywood has aircraft-themed shooting stages in the LA area, Victorville CA, and Atlanta GA. And when you’re done shooting, take  a trip back to the “decadence of the 1970s” with the Pan Am Experience. I am not making this stuff up.

A tip of the hat to Jim Rolin of Videofax for the tipoffs on the ARRI Look Library and Atlas Orion lenses (Videofax has orders in for the Orions), and to Mark Weingartner, ASC regarding the Steadicam M-1 Volt. Thanks, guys!

As to the hat being tipped, maybe it’s this one… 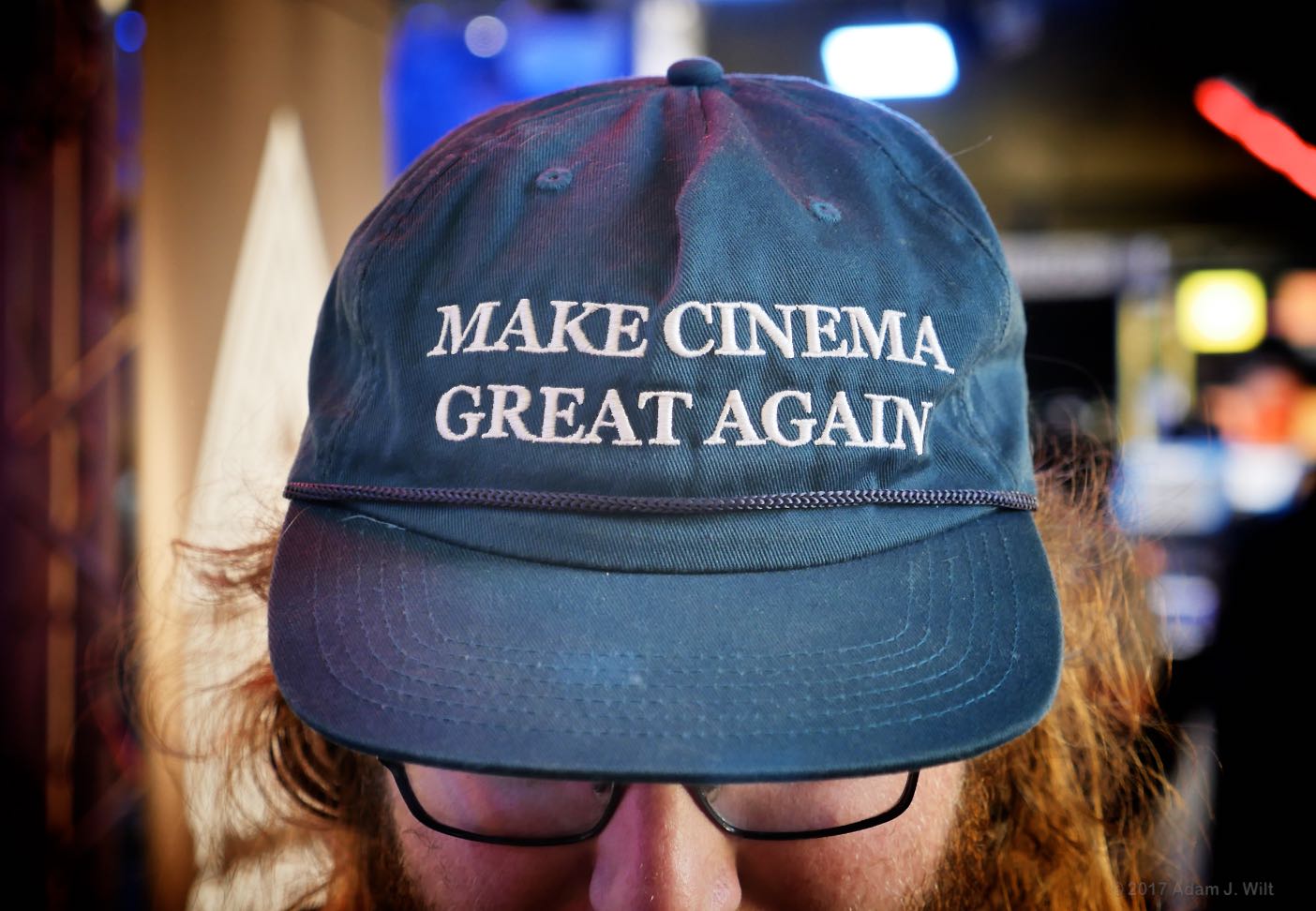 Disclosure: I went to Cine Gear Expo on my own dime (actually, it cost a considerable number of dimes once flights, hotel, and car were included). There’s no relationship between me and any of the companies mentioned, and no one paid me anything for coverage. However, as the Ingallina folks gave me free food, I figured I should at least include a picture of their dessert strawberries.