Three big companies, their camera announcements, and what it all means

Canon, Panasonic, and Sony all used Cine Gear Expo 2017 as the event to anchor their announcements of new cine-oriented cameras. What they revealed says much about where the industry is going, and when they revealed it speaks to the growing importance of Cine Gear as an industry show. [Updated 5 June to clarify that I don’t know what XF-AVC formats Canon will offer in a later upgrade.]

Canon revealed the C200 and C200B a few days early on May 31st—and it’s clear they laid the groundwork some time prior to that. Jon Fauer (as usual) had with all facts and a good set of photos ready to roll, and Elliot Smith was good to go with a hands-on review. Erik Naso pondered whether the C200s are good upgrades for C100 and C300 users, and why. On the day Cine Gear opened, Andy Stout delved further in the new CinemaRaw Light codec, and of course Canon already has a set of C200 white papers available.

There’s been a lot of discussion about this $6000–$7500 4K camcorder (the lower price is for an EVF-less, body-only C200B; the higher price includes EVF, LCD, top handle, and side grip). Many are distressed that the camera records only 8-bit 4:2:0 MP4 files to SD cards and DCI 4K Cinema Raw Light to CFast cards: the former is felt to be too lightweight for “serious” work while the latter is not cheap: a 64GB FCFast card will be consumed in a mere five minutes at 23.98 fps. (Gripers will be somewhat mollified by the promise of a future firmware upgrade to add XF-AVC recording, which may offer 10 bits,  4:2:2 or even 4:4:4 sampling in various flavors, though I don’t know which flavors the C200s will offer. Canon only says, “TBA”.)

People often grumble when Canon releases a new camera, whether in the EOS or Cinema EOS lines, usually saying (a) it’s too expensive for what it does, (b) it’s not pushing the envelope nearly as much as it should, and/or (c) they’ve completely misunderstood the market and built something nobody wants or needs. And yet, somehow, whatever overpriced, under-specced, missed-the-market camera Canon announces goes on to lead a happy and productive life. I think the C200/C200B will follow the same course.

I had a chat with Canon’s Paul Hawxhurst about point (c): who did they build this camera for? His answer was quite specific, though I’ve paraphrased it a bit: the C200 is for the C100 shooters who need an affordable, practical camera for their mundane day gigs, but want to step up their game on special projects. Plain, boring old 8-bit 4:2:0 MP4 will handle the long recording times and manageable file sizes needed for corporate talking heads, explainer videos, and the like, while Cinema Raw Light provides the grading flexibility and image quality for higher-end work—and it’s still more manageable and affordable than hanging an external recorder off the back.

While a 64 GB card may be consumed in 5 minutes, you can get cards up to half a Terabyte in capacity, for about 40 minutes of continuous recording time. And yes, CFast cards are expensive, but  they’re like film magazines, not film loads: they’re reusable containers, not expendables.

And, he said with his snarky hat on, if you’re already spending too much money on an “overpriced” Canon, why are you fussing about “overpriced” CFast cards? Remember when P2 cards came out? Or SxS? Or XQD? All new, fast media are annoyingly expensive. True, CFast isn’t that “new” any more, but there’s a global NAND flash shortage at the moment, and even commodity SSDs have suffered rising prices in recent months. Take a deep breath, buy some “digital mags” that’ll last the life of the camera or beyond, and get on with life.

Like many of the commentariat, I was a bit puzzled by the C200s when I first saw the specs and the pricing. But the more I thought about it, the more I think Canon knows exactly what it’s doing. The camera marks a further refinement and streamlining of the physical package, and the capabilities and price slot it neatly between the C100 Mk II and the C300 Mk II. The C200 may not make a lot of sense to “outsiders”, but those in the Canon camp—a somewhat hermetic society, like Apple or Leica users—are likely to adopt it with the same enthusiasm as they have other Cinema EOS cameras.

My only serious complaint is that the C200s employ the standard bayonet mount for the EF lenses, rather than the far superior breech-lock / positive-locking EF mount on the C500 and C700. Bayonet-mounted lenses can flex and wobble on the body, which they are wont to do once you hook up a follow-focus or drive motor; this is a sadly missed opportunity to continue the trend that Canon already started towards making a more stable EF attachment for cine uses.

The C200s are scheduled to ship in August.

Panasonic tantalized crowds with a mockup of the AU-EVA1 under a cloth at NAB 2017; at Cine Gear Expo two mockups were unveiled: one under glass, and one in the hands of the indefatigable Mitch Gross.

Mitch and his mockup attracted heavy crowds. I was his first interview at 10am; when I walked past at closing time, he was still at it—a security guard had to come over and threaten to throw him out so the show could close.

Like its larger VariCam stablemates, the EVA1 will have a dual-native-ISO readout (exact values TBD), V-Log and V-Gamut, and, with a future firmware update, raw output to external recorders. The camera will capture 4K at up to 60P and 2K at up to 240p. The button layout on the side panel is vaguely VariCam-ish, and Mitch says that the menus will likely have a VariCam-like flavor to them, too. One thing not carried over from the VariCam, I’m told, will be the long reboot times!

Why 5.7K? The EVA is a Bayer-pattern single-chip camcorder, and like all such beasties the “honest” pixel resolution of the debayered sensor is a fraction of the raw pixel count. If we go by the rule of thumb that a good deBayer yields a final luma resolution of about 80% of the raw pixel count, 5K will give you a proper 4K image. If we’re lucky, some of that extra .7K might be used to provide “lookaround” outside the active image area, so we can see mike booms and light stands before they show up in picture.

The units at Cine Gear Expo were weighted mockups, so the heft of the models was close to the 2.65 lb / 1.2 kg weight of the final product.

The cameras will have 2-, 4-, and 6-stop internal ND filters, electrically driven, along with a retractable IR filter on a second filter wheel.

The EVA1 will output 4K over both HDMI and SDI, and will feed both outputs simultaneously. There’s no eye-level EVF; you can fit a third-party loupe to the LCD, or use something like the Gratical if you prefer. Having both HDMI and SDI active means you can sacrifice one for an EVF and still have the other output for an external monitor/recorder or to feed video village.

An EF mount is the standard—and only—lens mount. Sadly, unlike the one on the VariCam LT, it’s a twist-on bayonet style, not the rigid and robust positive-lock version.

EVA1s are scheduled to ship in Fall 2017. More info at Panasonic’s EVA1 webpage.

Sony held a small press briefing hidden deep in the bowels of the Marathon Building before publicly announcing their next-generation CineAlta camera in the Paramount Theater.

Peter Crithary ran though the basics: Sony has has 17 years of experience in the cine world, and the F65 won a Scientific and Engineering Oscar in February. Sony’s Digital Motion Picture Centers exist in Hollywood, Pinewood Studios on the UK, Beijing, and Mumbai; these are places for industry pros to learn about and work with Sony gear, and for Sony to learn from industry folks. Sony also holds focus groups to have industry folks talk directly with design engineers (I’ve had the pleasure of doing this a few years ago), and they’ll take big-name DPs to Japan for intensive discussions—in the case of the current project, Claudio Miranda was involved.

And the current project? A complete, new, from-the-ground-up development of the next-generation CineAlta camera: 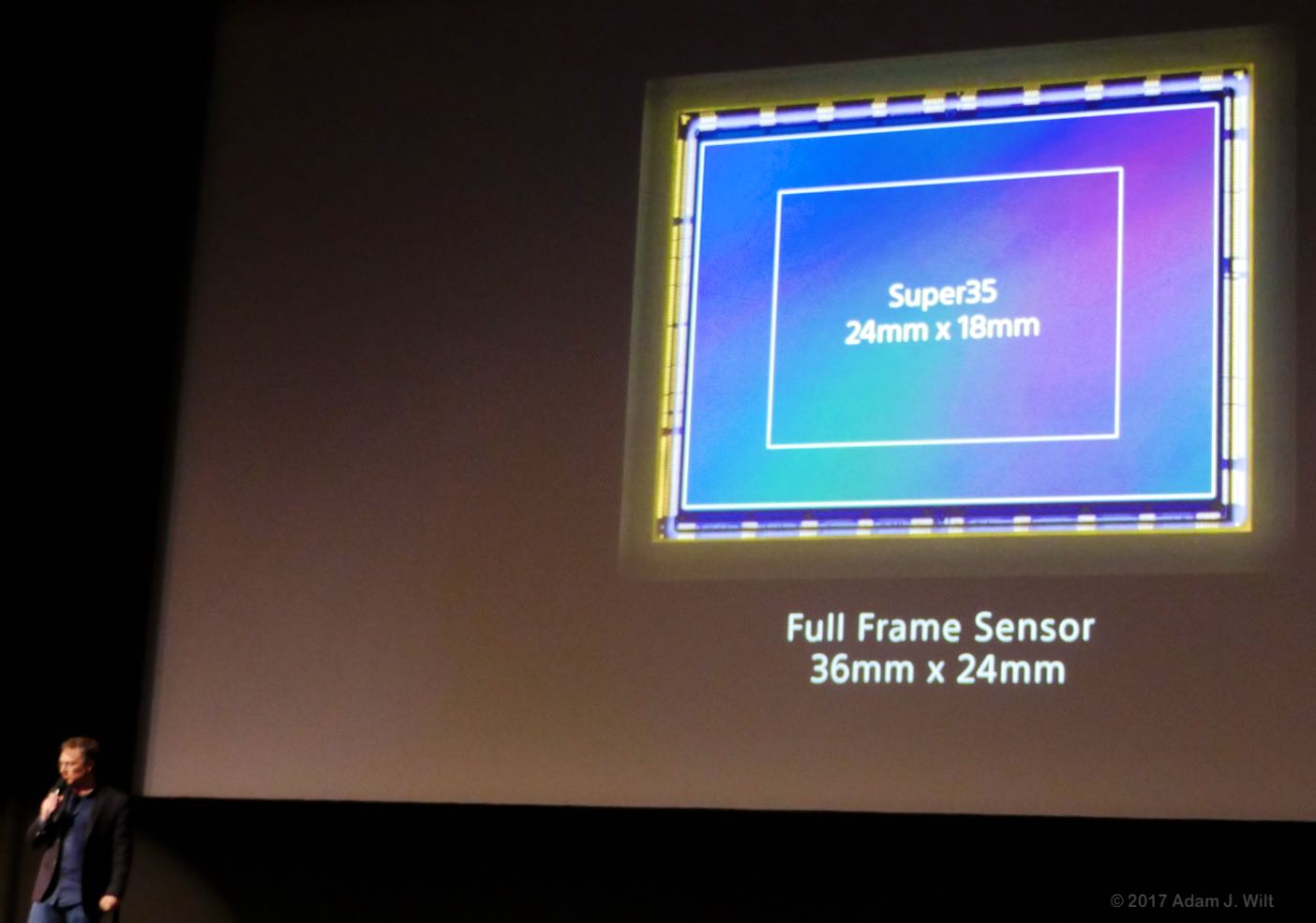 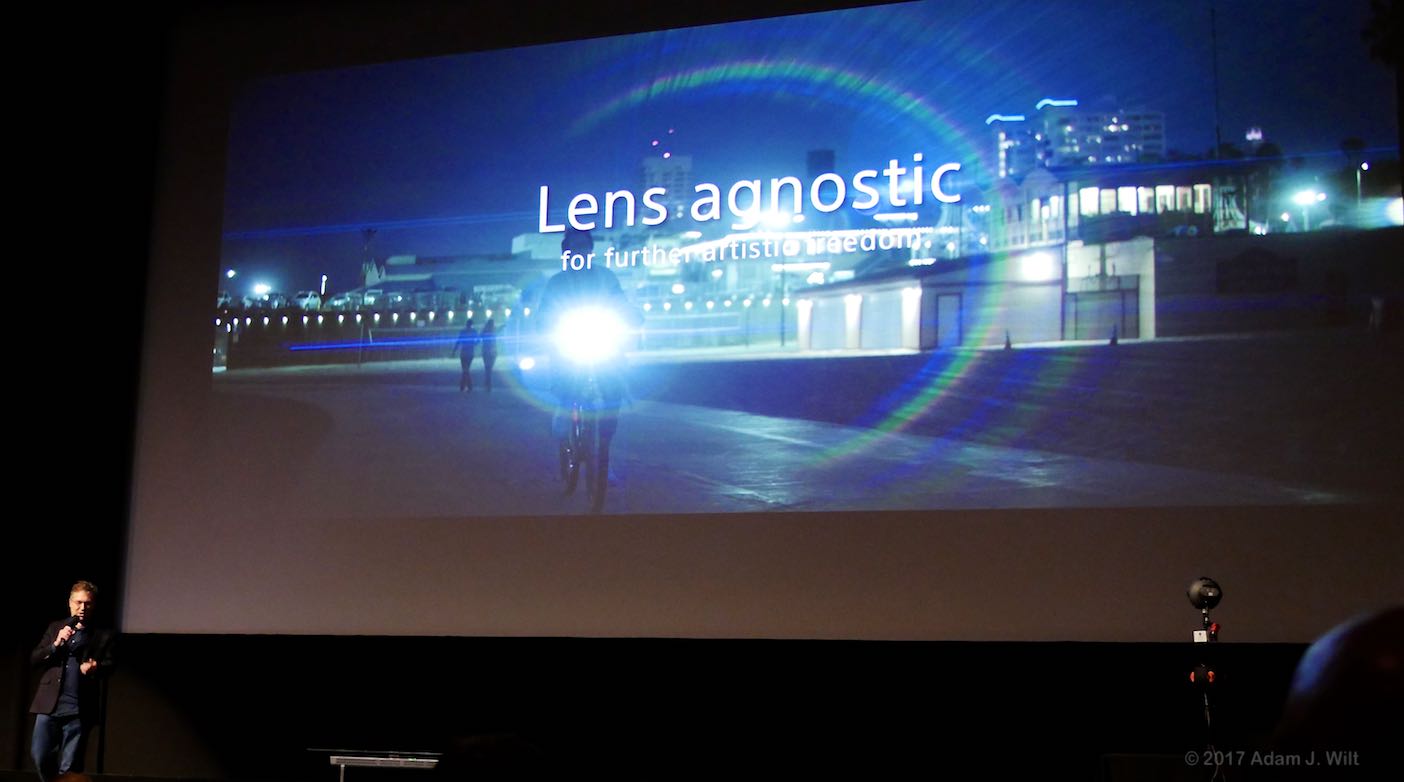 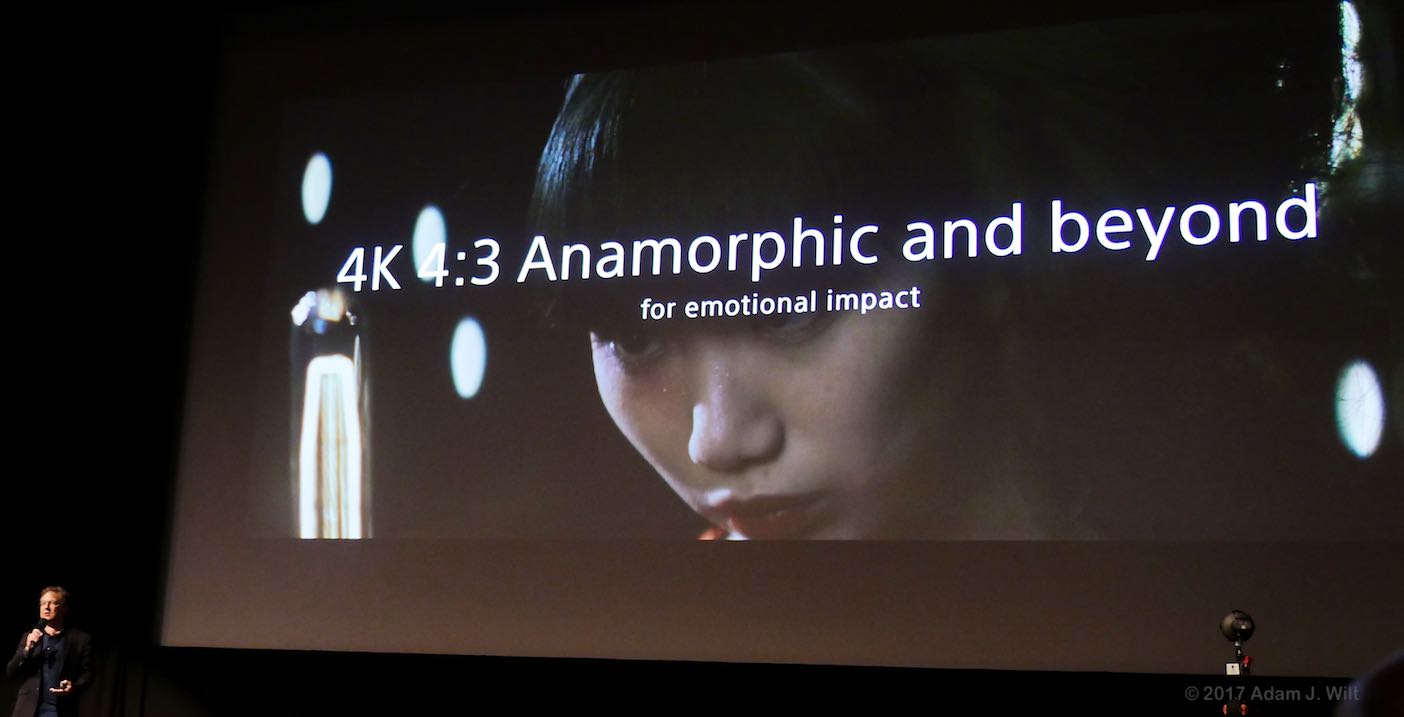 The RED-sensor-based Panavision Millenium DXL and ARRI Alexa 65 have legitimized the resurgence of large-format more than a bunch of aggro bad-boy biker-gang revolutionaries could (grin), and it doesn’t hurt that we’re now seeing large-format cine glass becoming increasingly available.

That the EVA1 uses a S35mm sensor instead of a four-thirds sensor as the GH5 and DVX-200 do is another indicator: size matters. I know a bunch of folks were disappointed that the EVA1 isn’t a direct follow-on to the AF-100/AF-101 MFT cine camera (hint: look at the GH5 instead), but S35mm was the right choice: while many (myself included) appreciate MFT as a perfect Goldilocks compromise between one-man-band live focusability and cinematic shallow depth of field, we’re in the minority.

Resolution agnosticism: scanning formats matched to broadcast or exhibition resolutions made sense in analog and early digital days, when memory was expensive, high-res sensors were difficult, and resampling framestores cost an arm and a leg. Nowadays there’s increasingly less reason to shoot what you screen, or to capture the same image you record. Shoot more pixels, and you can downsize for sharpness and detail, or have room to zoom in, pan ‘n’ scan, or stabilize the image in post. The EVA1 does this in a small way with its 5.7K sensor for a 4K image, downsampling in camera for higher quality. Sony’s announcement that their full-frame camera will be “lens agnostic” seems a clear indication that it’ll have plenty of pixels to play with, allowing for high-res images even with at least a S35mm crop factor.

HDR / WCG: all these cameras are firmly aimed at a high-dynamic range, wide color gamut future. Of course you’ll be able to capture log images at 10 bits or higher and/or record or output a raw image.

It’s interesting is that all three of these camera announcements were timed to synchronize with Cine Gear Expo, not NAB or IBC. It seems there’s a growing sense that NAB and IBC are too big and diffuse to be the best venue for cine-style gear rollouts; smaller, more focused shows like Cine Gear Expo and CINEC are the places and times to make a big noise in the industry. More power, then, to Cine Gear Expo and CINEC, and all the more reason to attend… or at least to keep an ear to the ground when they’re happening.

Disclosure: There is no material relationship between me and any of the companies mentioned. None of ’em paid me to write about ’em or offered any blandishments to do so.