The base app, CAPCOM GO! Apollo VR Planetarium, which is free, is the starting point for a series of “space travels” that take the viewer from the ISS to the stars, without leaving home.

Put your Virtual Reality headset on and enter your own FREE planetarium in CAPCOM GO! Apollo VR Planetarium, created to celebrate the 50th Apollo 11 Anniversary in July 2019.

Initially released in December 2019 and last updated in January 2020, CAPCOM GO! Apollo VR Planetarium, from NSC Creative, is a FREE Virtual Reality experience that serves as introduction to a series of DLCs (downloadable content) that expand the original idea. Constructed to celebrate the launch of Apollo 11, NASA’s first mission to land humans on the Moon, the title transports the viewer to, as the creators say, “a state-of-the-art facility with the latest opto-mechanical starball, film projectors and the first ever holoscope!” 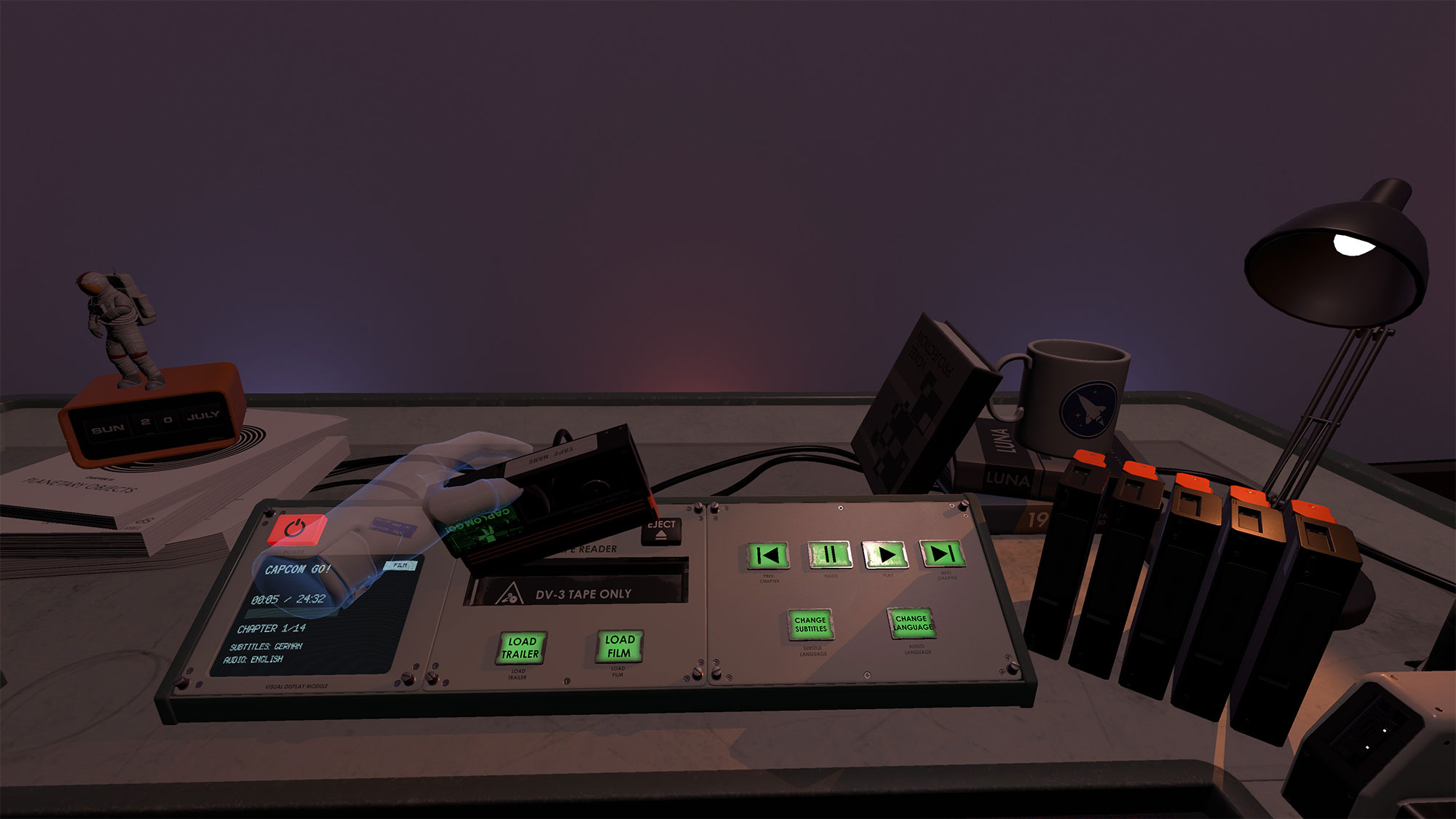 The VR planetarium, compatible with PCVR headsets like the Valve Index, Oculus Rift, the Vive family or the portable Quest, with the use of Link, is an easy way to get a glimpse of the catalog available from the creator of the title, NSC Creative, which is an award-winning UK studio with 20 years of experience in immersive media, and a specialist in immersive experiences for theme parks, VR, AR, MR, domes, 3D/4D, museums and science centres.

The planetarium in CAPCOM GO! Apollo VR Planetarium is your mission control room. Take a seat behind the control desk and use your VR controllers to explore each console. Your planetarium comes equipped with the ability to watch eye-popping trailers and full-length immersive films which are out of this world, revealing some of the titles produced by NSC Creative. Using the VIDEO MODE, put a video tape in the player and enjoy the show! 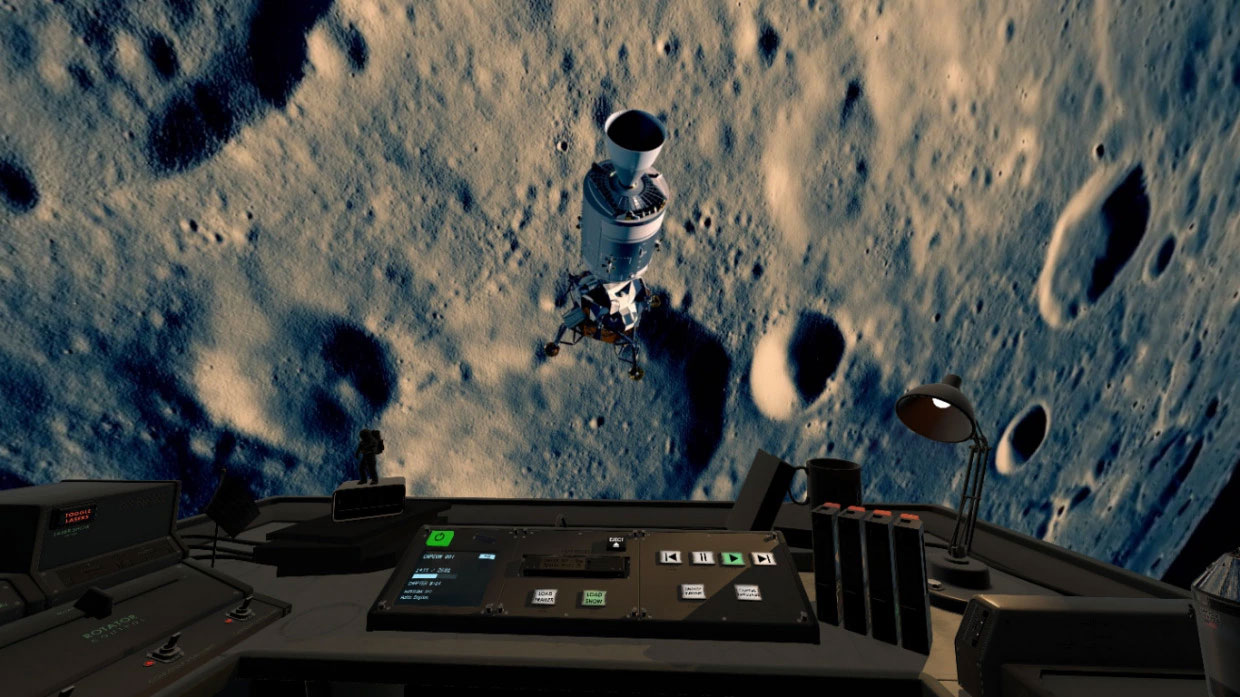 Take a seat and immerse yourself

Besides a series of activities to try, the app, which serves also as the base upon which the series is expanded, includes trailers for the following NSC Creative planetarium shows:

The STARBALL MODE opens a window towards the big sky. Everyone enjoys a nice relaxing tour of the night sky and your new star projector can resolve over a billion stars and has custom space race themed constellation artwork slides. Change the procession to see the cosmos roll past overhead. (Please note this is not a 100% accurate simulation of the night sky). 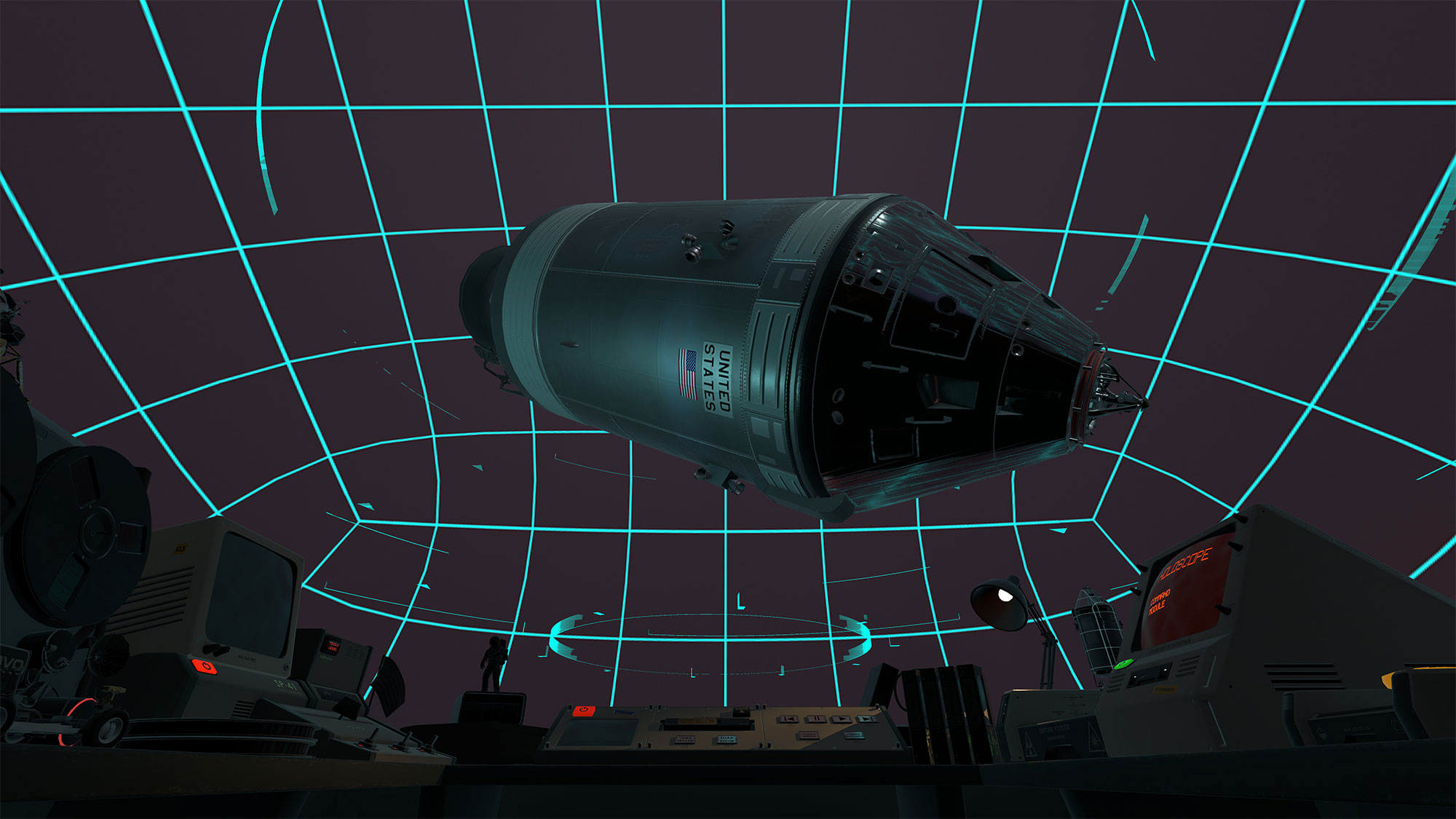 The HOLOSCOPE mode is another key element of the experience offered by the app. No other planetarium in the world has one of these. Grab an object from your desk and place it on the transmogrification pad to project a holographic visualization into the planetarium. You can almost reach out and touch it! Hear about the amazing feats of engineering that took Apollo Astronauts to the moon and back.

CAPCOM GO! Apollo VR Planetarium can be the start of a space adventure, as you take a seat and immerse yourself in one of NSC Creative’s 3D dome movies, explore the interactive planetarium controls to discover stars, constellations, holograms and lasers, celebrate the Moon landings, explore the wonders of the cosmos and take a tour of the International Space Station. If you want to take the experience further, there are three other Virtual Reality apps available:

CAPCOM GO! The Apollo Story is an award-winning planetarium film produced by the National Space Centre, UK that celebrates the achievements of the Apollo program and what it took to land the first human on the Moon. Screening in 100+ planetariums worldwide you can now watch it in the comfort of your own VR headset in the CAPCOM GO! Apollo VR Planetarium. This DLC content gives you access to the full-length 26 minute, 4k 3D 60fps 360° film with English, French, German and Italian narration and subtitles.

We Are Stars (Paid)

We Are Stars is an award-winning planetarium film produced by the National Space Centre, UK that explores the creation of the Universe, our Solar System and the origins of life on planet Earth. Screening in planetariums worldwide you can now watch it in 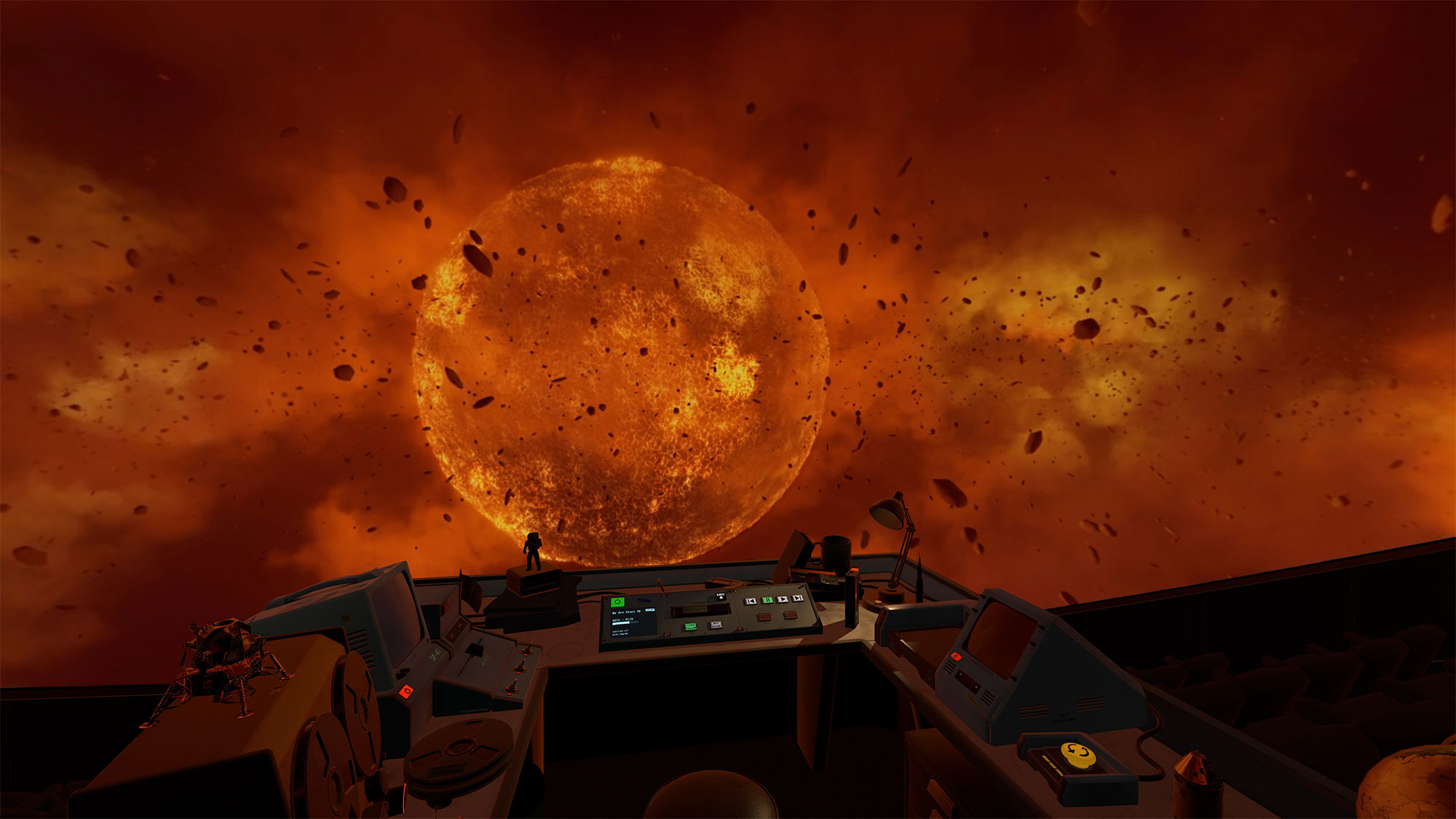 the comfort of your own VR headset in the CAPCOM GO! Apollo VR Planetarium.

We join the Time Master narrated by Hollywood superstar Andy Serkis, a Victorian gent with his very own time tent who whisks us off on a 13.8 billion year adventure. With expert input from leading scientists, cosmologists, astrophysicists, astrochemists, planetary scientists and astrobiologists we present humanity’s current understanding of where everything, including us, came from.

This DLC content gives you access to the full-length 26 minute 3D film with English narration and subtitles.

ISS 360° Tour with Tim Peake is an educational planetarium film produced by the National Space Centre, UK that takes you through a narrated tour of the International Space Station. Screening in planetariums worldwide, you can now watch it in the comfort of your own VR headset in the CAPCOM GO! Apollo VR Planetarium. 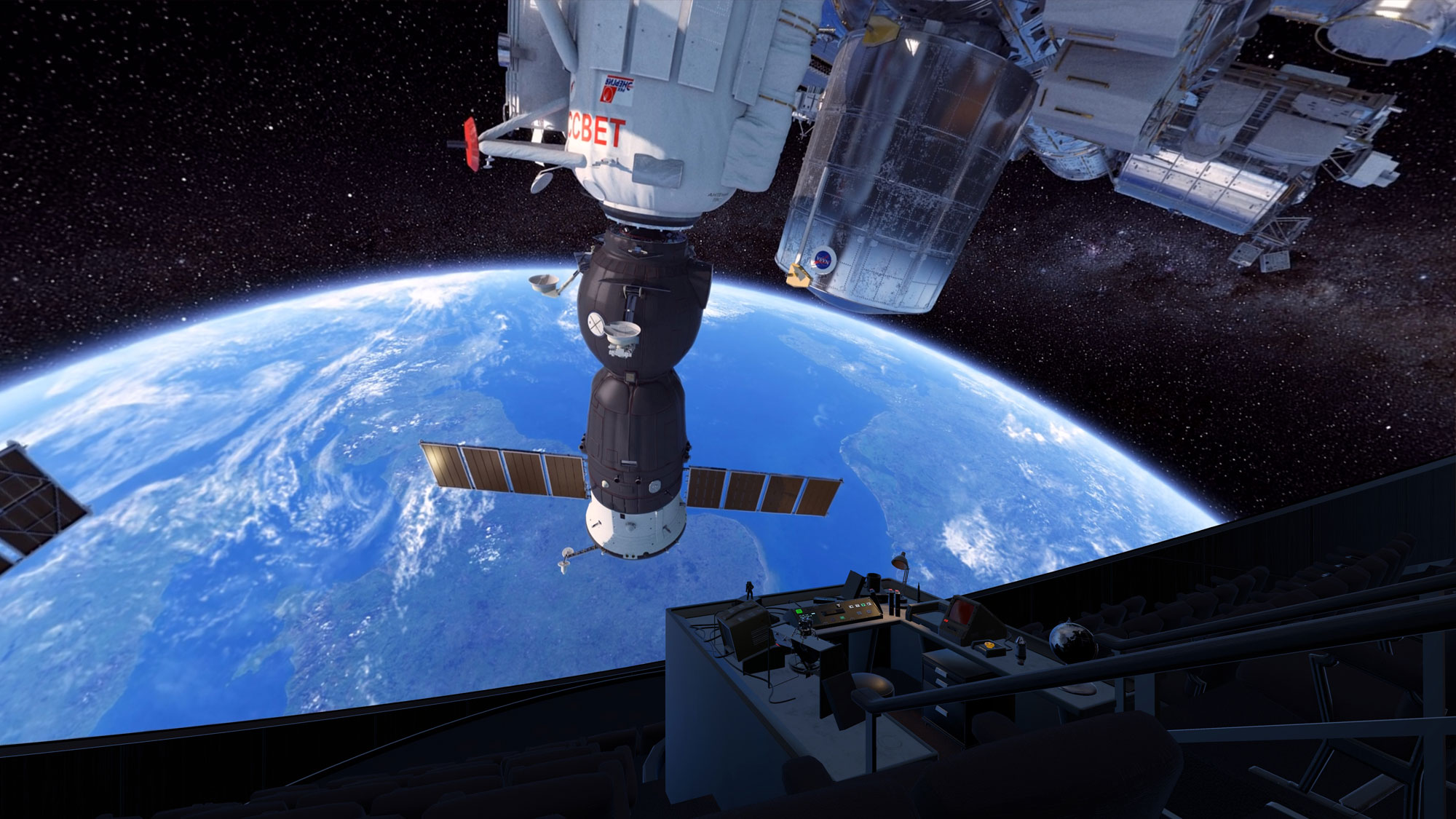 Working together with BAP (British Association of Planetaria), NSC Creative has produced a short immersive 360° experience which takes the viewer around the ISS (International Space Station) to see what it is like to live and work in space. Narrated by British Astronaut Tim Peake who has successfully completed his 6 month Principia mission. We also get to see footage of Tim shot onboard the ISS specifically for this project using a DSLR and Fisheye lens.

The project was supported by the UKSA (UK Space Agency) and ESA (European Space Agency) with additional support from Explorer Dome, Centre for Life and the National Space Centre.

This DLC content gives you access to the 15-minute film as a free addition to the primary experience. 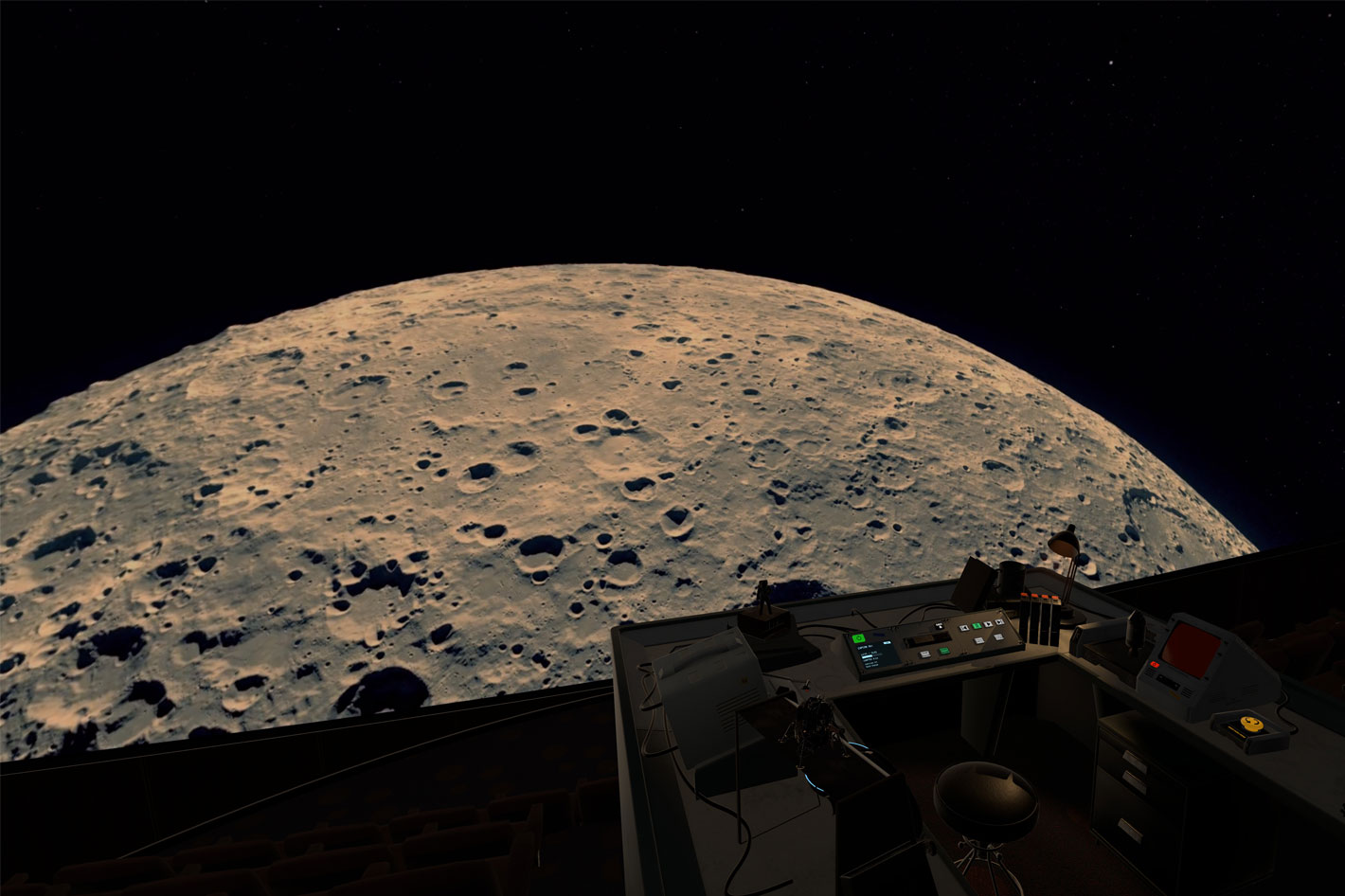 The CAPCOM GO! series is available for fulldome experiences, iOS, Android, Google Cardboard/Daydream, Oculus Rift S, HTC Vive, Valve Index and Windows Mixed Reality. Although you can watch the content on a flat screen, virtual reality headsets offer, as expected, the most immersive experience, and one that you can explore from the comfort of home.

The two paid titles in the collection, We Are Stars and CAPCOM GO! The Apollo Story can be acquired for less than $10, making the collection a bargain if you want to expand your Virtual Reality library with more titles related to space. We’ve previously suggested, here at ProVideo Coalition, titles as The Edgar Mitchell Overview Effect VR Experience, Space Explorers, the largest production ever filmed in space, or the Apollo 11 VR Experience.