Canon’s Cinematic Storytelling in 180° VR at Sundance is not a step towards the Metaverse, more a solution that uses Canon’s hardware to make the entire process more accessible to newcomers. 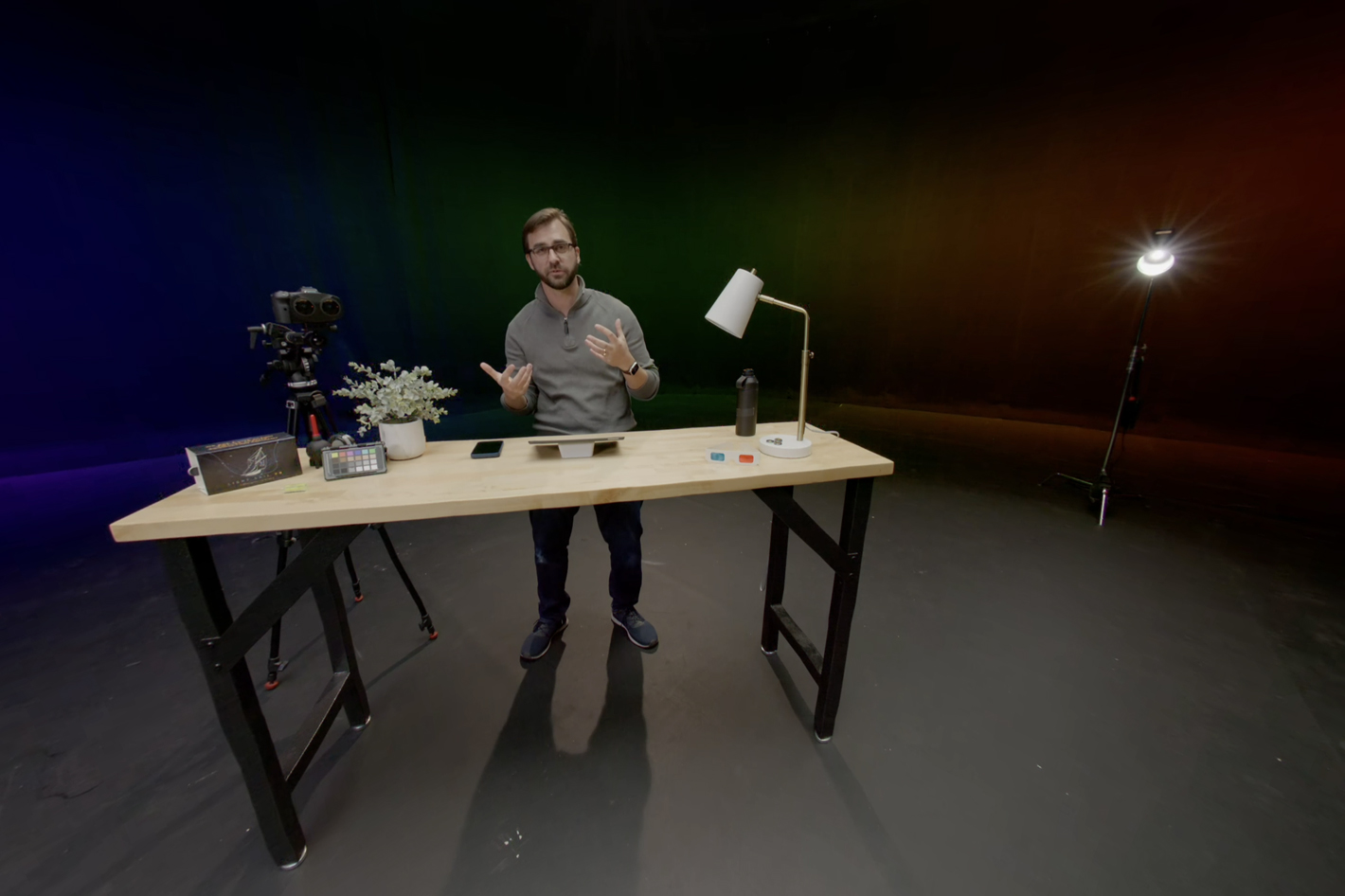 As part of the virtual Sundance Film Festival, Canon partnered with VR expert Matt Celia on a workshop on Cinematic Storytelling in 180° VR. Here is a video and all the info you need to know about the system.

Matt Celia, the co-founder and creative director of Light Sail VR, offers up his best creative techniques and technical tips for filmmakers new to immersive entertainment. The primer, streamed in 180° virtual reality, features some excellent takeaways for cinematographers and directors looking to try their first VR project.

The workshop was streamed in 3D 180° VR (3D viewing requires compatible headset), so you’ll get a front row seat to be inspired by Celia. Available for viewing via headsets, web browser, and mobile devices. Now, this is all possible thanks to Canon’s EOS VR System, which allows you to take your creativity to the next level and immerse your viewers in a whole new dimension through a stereoscopic 3D 180° VR world.

Matt Celia’s workshop gives users a sound starting base for exploring the power of stereoscopic 3D 180° virtual reality to immerse audiences in captivating stories. In the 34 minutes long video you will learn creative techniques and technical tips Celia has developed through his work on 70+ VR projects. You’ll also get to know the new Canon EOS VR System, featuring the RF5.2mm f2.8L Dual Fisheye lens and the EOS R5, which simplifies cinematic VR filmmaking. 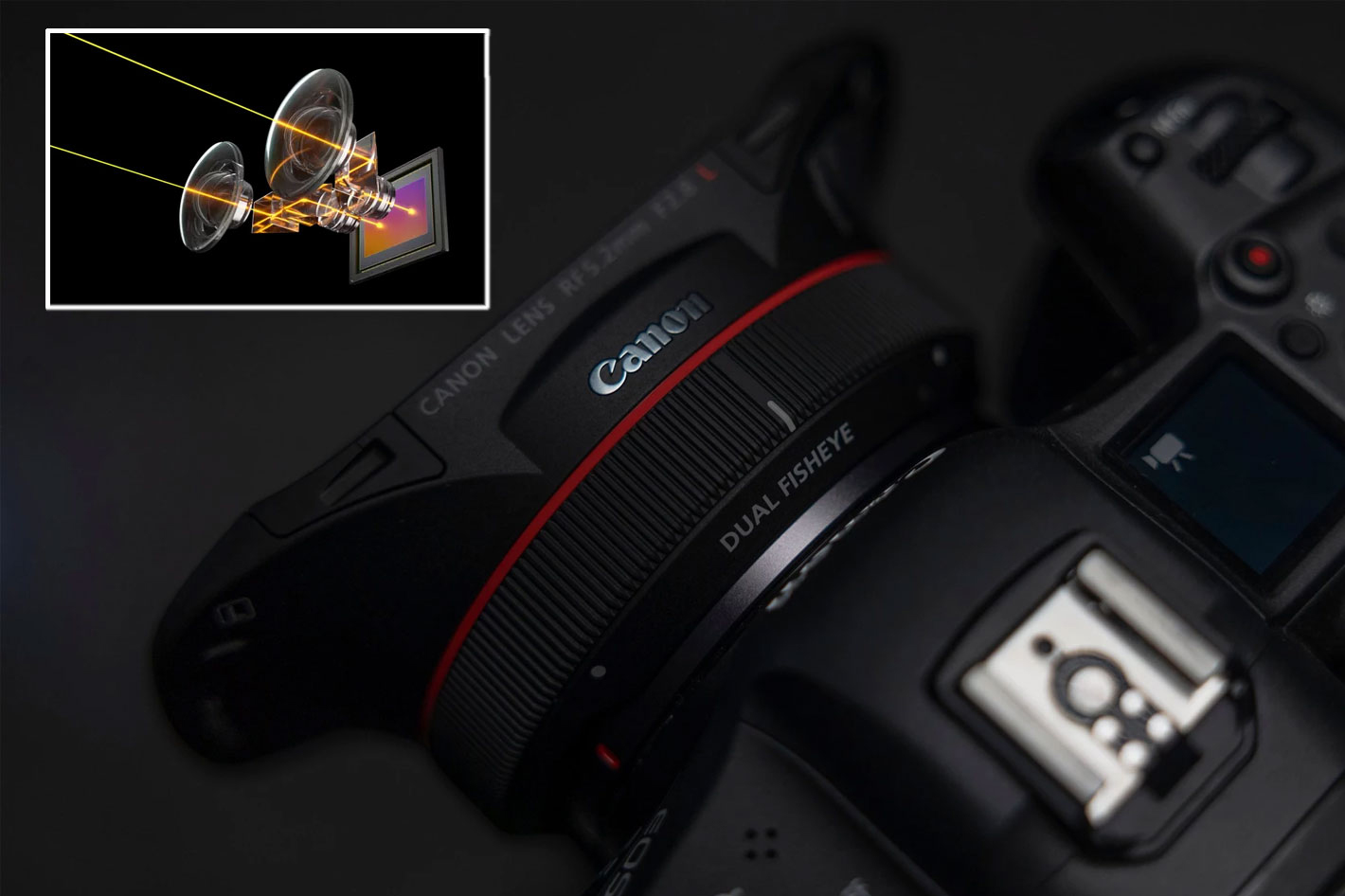 This is not the Metaverse

Canon’s EOS VR System begins with the RF5.2mm F2.8 L Dual Fisheye Lens which is Canon’s optical solution to the many challenges that have troubled VR image makers for years. For many, shooting VR meant the need for multiple cameras to be aligned, positioned, and synced together. Those separate recordings were written as separate files on separate cards. In post-production, people would need to then sync up and stitch those video files together. To help with some of these challenges, this lens features a beautifully engineered and optimized folded optical design, with separate Left and Right optical systems – helping you capture stereoscopic 3D imagery with a 190° field of view to a single full-frame image sensor.

One word of caution, though, if you think Canon is about to enter the metaverse competition with its EOS VR System. This is not a solution to create 360 degrees of immersion (which appears to be what the Metaverse is all about), but a stereoscopic 3D 180° VR world, as the company states, over and over. So, if your idea of the metaverse is complete immersion, this is not it: and there is no word from Canon, when explaining how it works, that suggests “metaverse”. In fact, during the workshop Matt Celia makes it clear how the system works and why it is a great solution for cinematic storytelling. Go, watch the video – with a VR headset if you’ve one – and discover the advantages of 180° VR. Before, if you have the time, read the following paragraphs, which share some of the past experiences related to VR180, that brought us here. 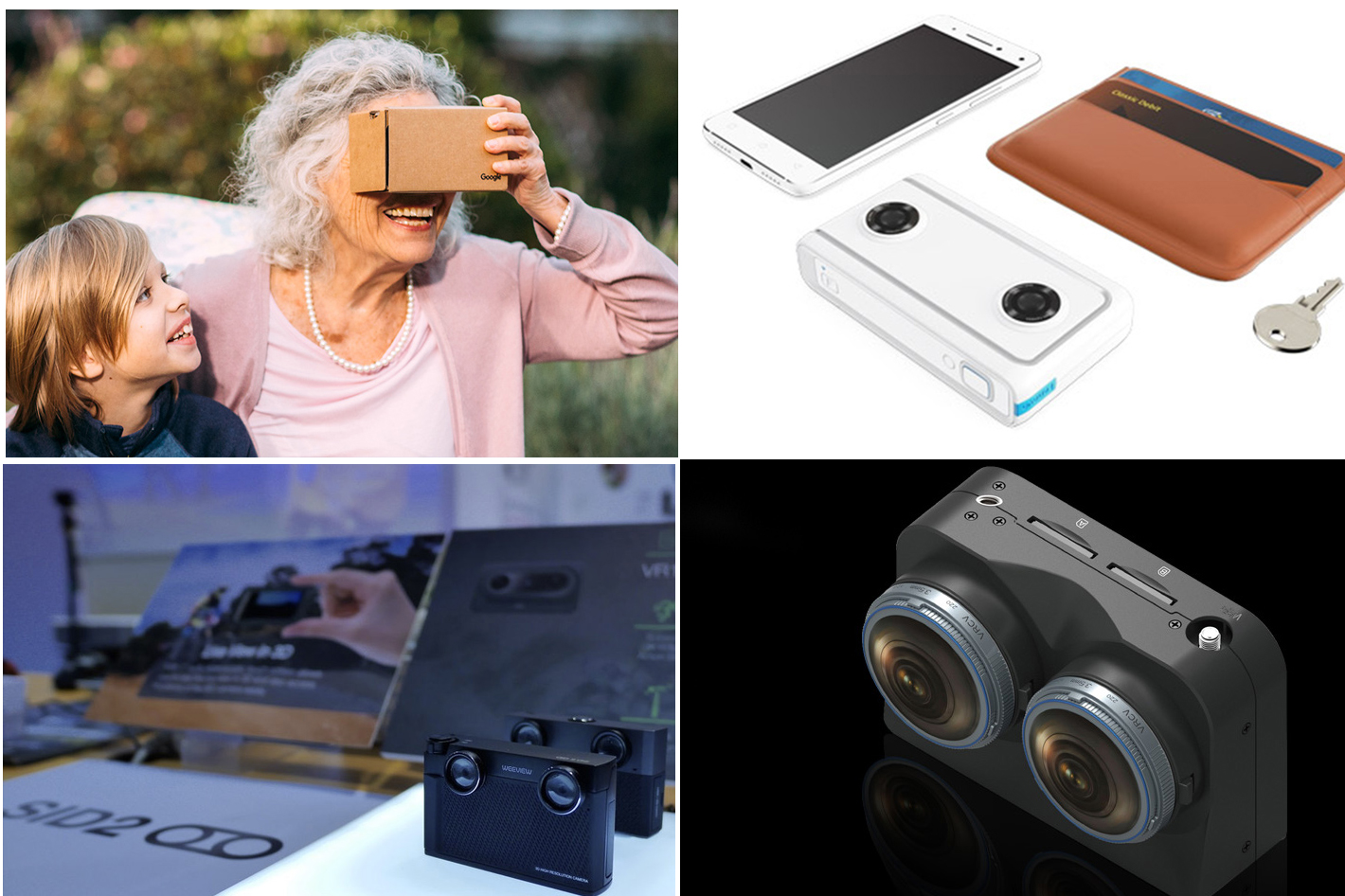 VR180, a format created by Google

Back in 2017 Google created a format, VR180, stating that it was a simpler format for immersive media. At the time, as ProVideo Coalition reported, Google said “360VR is overkill for many people” because, the company discovered, that most users of VR tend to only explore the area right in front of them, meaning 180 degrees VR is enough. They are now developing VR180 tools, so you can “Capture the world as you see it”.

Google’s move was somehow surprising at the time (2017), because the company had invested heavily in in 360 and VR for the previous two years, but according to a post by Frank Rodriguez, Product Manager VR at Google “…we’ve heard from creators and viewers who want to make and see even more immersive videos on YouTube. So, we’ve been working with Google’s Daydream team on a brand-new video format, called VR180, that we believe will make VR content even easier to create.”

Many companies – YI, Lenovo, LG and Zcam – signed in to the VR180 certification program created by Google, and for a while the format seemed to be expanding, but when in 2018 ProVideo Coalition published “The 2018 guide to Google’s VR180 cameras” there were already doubts about the future of the standard. In 2019, as Google shared the technology to build VR180 to the open-source community, the signs were clear for everyone: the standard as going nowhere. That same year, a Google representative told Variety the company had no news about VR180 to share, and no news continues to be, in 2021, the rule when it comes to VR180. 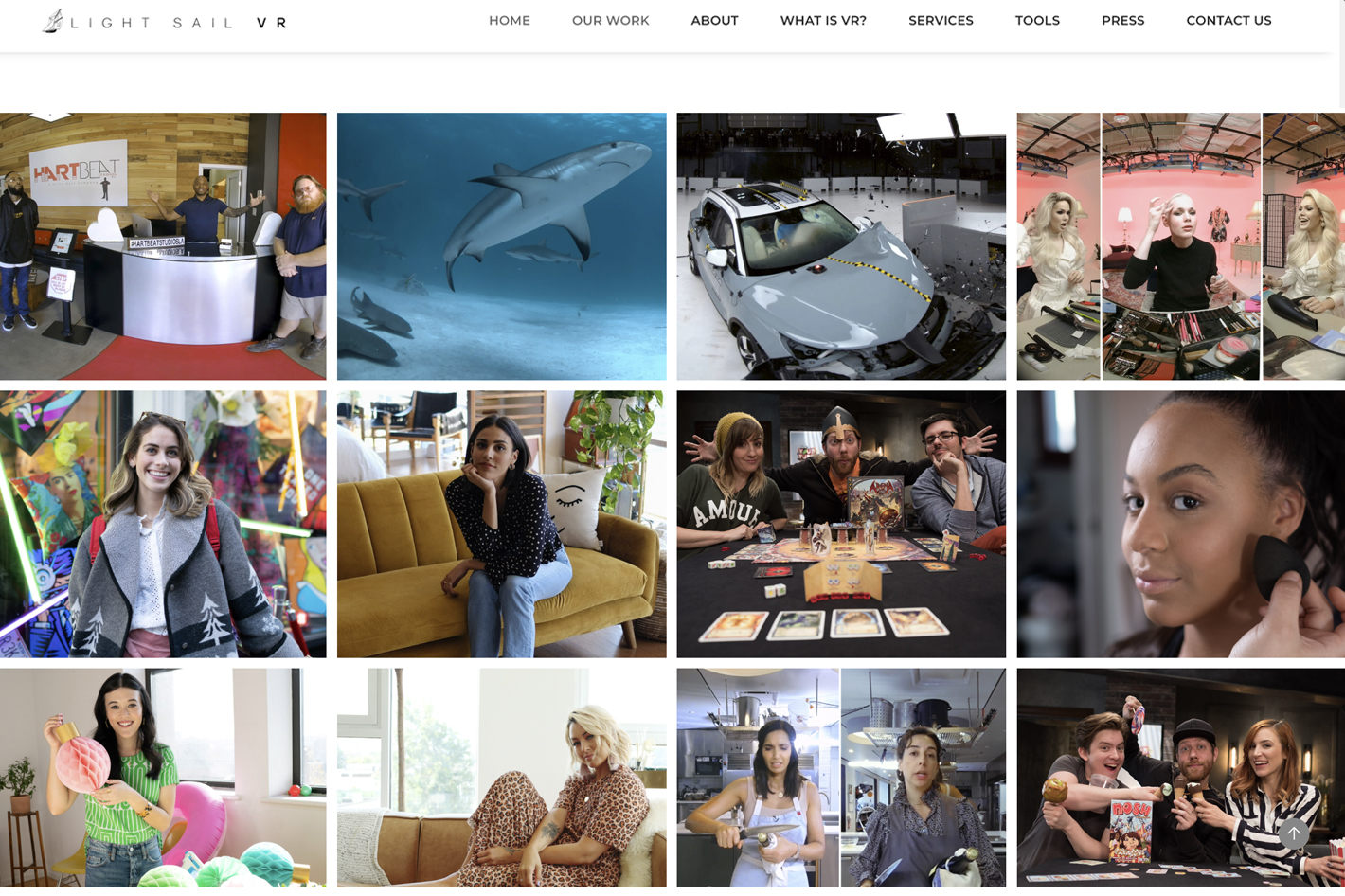 It’s not hard to understand why it failed: offering not full but only “half-immersion”, VR180 is easier to produce than VR360, but does not satisfy owners of VR headsets, which tend to look all around the immersive spaces they visit. The fact that VR180 also works on screens is positive, but viewers are again limited to “looking ahead” in a world where full VR is already viewable online… on a screen (although not in 3D). So, what seemed like a promising idea in 2017 is not so bright in 2022.

Still, because Canon’s EOS VR System makes the entire process easier, and relies on cameras that can also be used for normal capture, the 180° VR proposed by Canon may well become something creators use. In that sense, the experience shared by Matt Celia is an important lesson. Here are some of the tips included in the video:

Matt Celia’s mantra is simple: the story first. From his Light Sail VR profile page, we discover that “Matthew Celia is a passionate creative with over a decade of experience spanning technology, film production and entrepreneurial endeavors. Celia fuses his knack for crafting authentic narratives and technical prowess across all sectors of VR production to create compelling cinematic storytelling. His work has amplified the impact of immersive content for top brands and artists.”