Canon’s new Free Viewpoint Video System aims to give users a sense that they are really there… starting with sports events. The company believes the system is another contribution to the development of video culture. 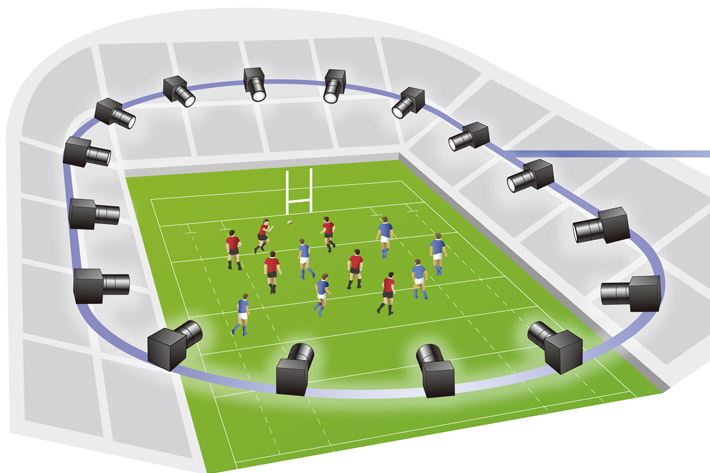 Imagine watching a soccer match as if you were there, running amidst the players, viewing it from any possible angle. Canon says it is possible, and will demonstrate the system in November.

Canon Inc. announced the development of the Free Viewpoint Video System, a new visual solution that incorporates the optical and sensor technologies cultivated by the company over many years and points to a whole new direction in terms of the way we see the world around us. Using this technology, Canon aims to provide a high-value-added imaging solution for a wide range of applications including sporting events.

The system can be used in different areas, but Canon started to experiment with soccer, because it is a popular subject, and one for which there are, already, various types of video production,  employed to convey a passion for sports and the thrill of competition, so users get the best experience. The system being developed by Canon offers a video experience that can be viewed from various angles and viewpoints, expanding the boundaries of visual expression and contributing to the development of video culture.

The system comprises several high-resolution cameras set up around the stadium, which are connected to a network and controlled via software to simultaneously capture the game from multiple viewpoints. This in itself is nothing new, as multicam coverage of events is the norm today, and video editors (NLEs) offer all the tools to edit those segments into a final video. It is here, though, that Canon’s system diverges, as it is used not to give viewers a “canned” vision of one event, but to feed all the data into computers. Afterwards, image processing technology renders the videos as high-resolution 3-D spatial data where users can freely move a virtual camera around the 3-D space, resulting in video that can be viewed from various different angles and viewpoints.

The Free Viewpoint Video System offers a completely new, totally immersive visual experience that enables viewers to operate a virtual camera in 3-D space to move freely around the stadium and even experience the simulated physical sensation of being among players on the field during a game. Along with providing a new way to enjoy sporting events, Canon plans to explore such potential applications for this system as training teams and athletes.

The video published by Canon to demonstrate the system was captured during a Japanese League Match, November 3, 2016, at the Kawasaki Todoroki Stadium, Kanagawa Prefecture, with two teams playing: Kawasaki Frontale vs. Gamba Osaka. The video and the information provided suggest what can be achieved in the future: theoretically, each user/viewer can create their vision of the match, by choosing the camera and angle. It’s an interesting idea, not very different from what is already possible today in video games, where users can choose from virtual cameras to review the played segments, something usually present in soccer games, like the just launched Pro Evolution Soccer 2018, or car driving simulators as Forza Motorsport, Gran Turismo or Project Cars 2, which arrives to the market this September, offering players “virtual” built-in broadcasting tools allowing them to take on the role of Director or Broadcaster, and stream the race live, using the dedicated tools developed by Slightly Mad Studios, which promise to be a game changer for this type of games. And suggest how similar tools, either for live broadcast or replays, might be applied in other areas.

One more note, for those technically savvy: ProEvolution Soccer 2018 works in tandem with Nvidia’s Ansel system – which we mentioned here at ProVideo Coalition before –  allowing users to capture stills from the moving images, choosing the exact angle of each capture and a series of other aspects of the final “photograph”. The video below demonstrates the process, suggesting, also what may well be another new exploration path for photographers.

Many times it is said that the future of photography is video, starting with 4K, which allows to capture hi-resolution stills from the animated frames. Nvidia’s Ansel is a sign of what is possible to create, and while it is limited to video games, now, the technology can, no doubt, be applied in video, giving photographers another new tool to capture stills, while also giving them the freedom to frame the subject in multiple different ways. Meaning, again, there will be multiple possible interpretations or visions of the same moment, as the “photos” published by users of Ansel, showing their experiences in video games,  demonstrate. Having used Ansel myself multiple times, I can vouch, as a photographer, about the interest of the interface for the creation of unique images.

An interface like the one from Ansel – or those already present to recreate action moments in other games – but applied to the system Canon now announces, would allow users to create their own interpretations of an event, sharing it with friends, family, online communities. It’s an interesting option, although not without its risks, as suddenly everyone is “editor” of material already copyrighted by others. That’s something we probably will have to deal with in the future. For now, let’s just be amazed with what is possible to create with the tools and technologies we’ve today.

This new system represents another asset for Canon, a company which strives to promote sports and culture by using its cutting-edge products and technologies to develop innovative ways to enjoy visual content. The Free Viewpoint Video System will be showcased for the first time at the Canon booth during Inter BEE 2017, the International Broadcast Equipment Exhibition 2017, , held from November 15 to 17 at the Makuhari Messe in Chiba, Japan.