When nVidia decided to create a new tool for “taking pictures” inside video games, they named it Ansel, after the popular photographer Ansel Adams. Announced with the new GeForce GTX 1080 graphics card, the feature will be available on all GTX cards, including the just announced 1070. 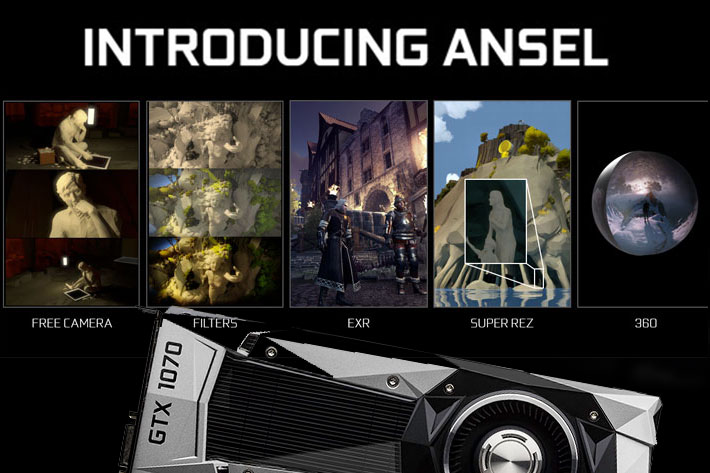 Ansel Adams, Industrial Light & Magic, virtual cameras, photography and a lot of imagination are the reason for this article, which seems to be about video games, but is more about the growing connection  between the worlds of Cinema, Video games and Photography.

While the introduction of Ansel to video games may not appear to have a directly link with photography, the fact is that it has not only to do with photography, but with many of the technologies we will see in video and photography in the future. It also relates to the freedom of capturing unique images which video games offer photographers and videographers.

The newest graphics card from nVidia, the GTX 1080,  will cost around $600, more than what many users can afford or want to pay for a card. That’s the reason why everybody expected the appearance of the GTX 1070, which will offer slightly less performance but will cost much less, around the $370 mark, making for a more logical card in terms of desktop gaming. Yes, I know, by now you think: what does this have to do with Pro Video Coalition?

Well, together with the new card nVidia announced a technology, Ansel, able to, as the company says, “revolutionize screenshot capture for Geforce GTX gamers”. Ansel is named after photographer Ansel Adams, and just that would be interesting enough to write a story here… but there is more.  Game photography is, according to nVidia, a “new art form – screenshots can be posed and framed, and those with a great eye will select the best scenes and most beautiful vistas, just as a real world photographer would. The very best screenshots from famous game photographers like Duncan Harris, James Pollock, Leonardo Sang and Joshua Taylor are shown in exhibitions, printed and framed, and admired by millions of gamers online.”

Many of us, continues nVidia, “would love to take similar screenshots, and try as we might we simply can’t work around the limitations of traditional game capture – views and camera angles can’t be changed, enemies continue to attack, and you can only capture a generic shot with the HUD visible.”That’s where Ansel comes in.

Before we continue, let me state one thing: I understand that nVidia is doing its marketing, but the situation in terms of image capturing in games is not exactly as they say. People have been taking photographs (printscreens?) inside games and virtual worlds since the first day they were told they could, I believe. As someone who started to write about the computer games industry in the 1980s, I’ve used the printscreen key (or whatever key I could) as my camera trigger, as soon as that was viable. With some platforms, as consoles, I would use a SLR camera (yes, transparencies which where scanned to be used in magazines) to get pictures of a TV screen. But with PC games, the printscreen was the way to go.

Being a photographer as well as a writer, I wrote extensively about picture taking inside games and virtual worlds (I was, as other journalists, a newspaper special envoy inside the virtual world Second Life, and even had a book published about the experience), and always applied, there, the same rules I used for photography in the real world. For many people, those memories “in game” are as important as the snapshots from their holidays, especially when people spend so much time in virtual worlds. Not much different from picture taking at Disneyland or any other theme park, in fact, as writer Umberto Ecco suggested in his book Travels in Hyperreality.

I saw photographers move into spaces like Second Life, where they created galleries with their photos from the real world, and I also saw them exhibiting in their galleries images taken inside those virtual worlds. In many cases, and because developers became aware of the importance of “photos” taken in their games, they created conditions for players to get the best angles. One good example of that is Second Life, where photographers can select where to position virtual cameras – virtually anywhere, in fact – and also the time of day, atmospheric conditions, cloud coverage, etc. So, while nVidia’s Ansel takes this to a new level, it seems, it is nothing absolutely new in terms of moving freely. One of the great things about many of modern games is, exactly, the freedom virtual cameras give.

I’ve thousands of pictures from multiple games, some telling a story of over eight years playing them. One such example is Lord of the Rings Online, which I’ve played with my two sons. They are not playing the game any longer, but we still have pictures of our characters there together, and we do cherish them as any other photo of a family reunion. Because, after all, we experienced the same adventures together, although in a virtual world based on the universe from Tolkien. I am at the point, now, that I do some filming in virtual worlds, as I showed in Being a Videographer in Virtual Worlds.

Being a Videographer in Virtual Worlds

Now that I’ve, somehow, set the scenario, let me return to the information  available from nVidia and explain a bit more about what Ansel can do. Ansel is a revolutionary new way to capture in-game shots and view them, even in 360 degrees. Compose your screenshots from any position, adjust them with post-process filters, capture HDR images in high-fidelity formats, and share them in 360 degrees using your mobile phone, PC, or VR headset. That’s what nVidia is offering users. Could be a videographers dream, in fact. 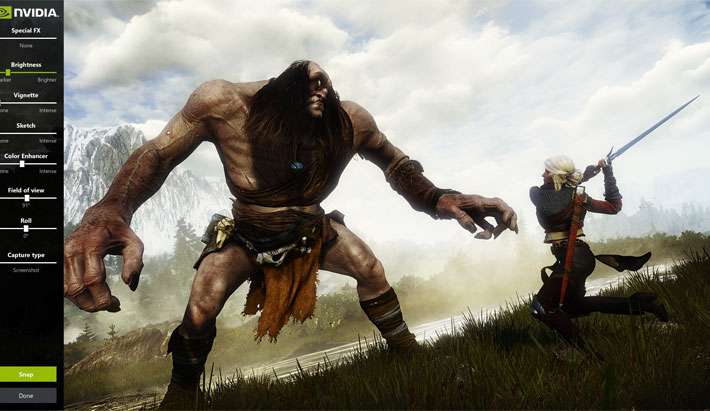 Now for the tech bits. The system allows users to capture shots in super resolution for the most detailed images and perfect edges. Capture up to a 4.5-Gigapixel image, or 32 times your game resolution. That’s big. The second tech element Ansel offers is EXR, which is an open source image file format created by Industrial Light & Magic that provides higher dynamic range and depth. It allows for 16 or 32 bit floating point storage per channel, compared to the traditional 8-bit integers in most formats. Capturing in this format enables you to choose your exposure in post, as well as apply extreme color correction without banding artifacts.

Ansel also allows to  capture game environments in 360 degrees and view them on a mobile phone, PC, or VR headset, and introduce “Instagram” effects like grain, Black & White, Sepia or Hue Shift in images and adjust the mood and look of your favourite games. Something I am not sure Ansel Adams would do.

To be implemented, the technology needs a bit of extra work from game developers. Some lines of code need to be written, nothing special says nVidia, for games to offer these extra options through Ansel. An update of software will suffice, in most cases, to open the doors – of perception? – to this new level of immersion. A number of top games,  including The Witcher 3: Wild Hunt, Epic Games’ Fortnite, Paragon and Unreal Tournament, Cyan Worlds’ Obduction, Thekla’s The Witness, Boss Key Productions’ Lawbreakers, Ubisoft’s Tom Clancy’s The Division, and the highly-anticipated No Man’s Sky from Hello Games will be “Ansel able” soon.

Knowing that Ansel Adams demonstrated, already in 1983, a curiosity about digital cameras, it would be nice to see how he would react to this use of his name in a video game photography capture program, if he was alive. I bet we would be using it to photograph some new landscapes… virtual ones!