Creating a Space Simulation video is easy with the tools available to videographers. Let me take you into a virtual world! 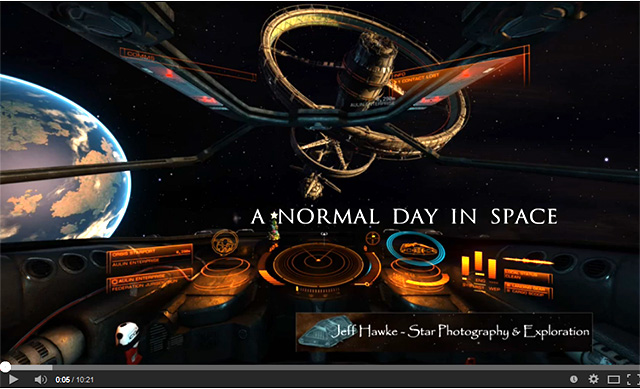 I continue to test PowerDirector 12 as an option to edit my videos, and this is a new article about the program and what I am doing with it. It is also a mix of different technologies in use, from nVidia's ShadowPlay to a PC game that will be launched this year, Elite: Dangerous, from Frontier, so I thought this may interest some readers.

Although my column at PVC bears the name DSLR Moving Pictures, the name should be looked as an umbrella to different explorations. Digital cameras have opened new venues for domestic videography. After all, home is the place where many future film directors may start their path!

Using a DSLR for video is already a sign of being at crossroads between technologies, so it makes sense for DSLR owners to be explorers of the new things that emerge in the digital worlds around them. Cameras need computers these days, and it would be foolish to not cross the bridges between different areas that come together on your desktop screen. You'll learn a lot simply by opening your mind to the fantastic new world and tools accessible to many of us. 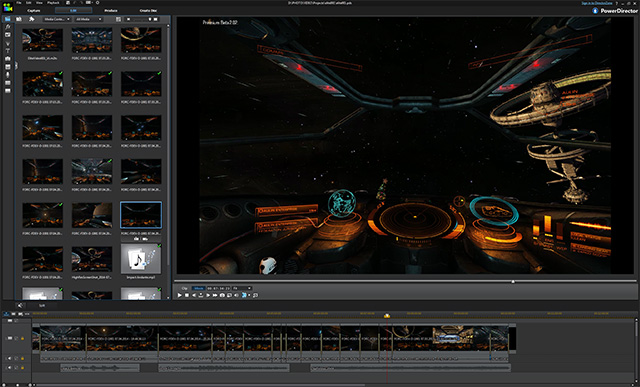 One of the good things about digital technologies is that you can easily mix them together and experience things that would be hard to make work together in the old days. Take this example: I like video games and always wanted to be able to show my adventures in them, but most of the technology available to do it has limitations. I've resorted to taking pictures, thousands of pictures, of multiple games I've played. Let me make a revelation here: I've played video games (mostly PC games, really) since the eighties, and I've written professionally about the industry for over two decades, being a regular visitor to the main industry fairs in Europe and United States.

So, my love for video games comes from Spectrum days, a small 8bit computer created by Sir Clive Sinclair. It was also on that computer I firstly played a game that marked a generation: Elite. Elite is the “Grand Daddy” of Science Fiction  space simulators, and it is returning to the market 30 years after the initial release. It's a fantastic return and one I could not miss, having played the original.

Elite, for those that do not know the name, is a seminal space trading video game, written and developed by David Braben and Ian Bell and originally published by Acornsoft for the BBC Micro and Acorn Electron computers in 1984. Elite's open-ended game model, advanced game engine and revolutionary 3D graphics led to it being ported to virtually every contemporary home computer system, and earned it a place as a classic and a genre maker in gaming history.

Well, Elite is returning this year, with graphics that fill the dreams we had when we first played it. I've been playing the beta version of the game during the last month and I wanted to create a video  that would sum some of the experiences available there. As I said, technology, these days, opens new venues for videographers willing to experiment. That's a challenge I could not resist. 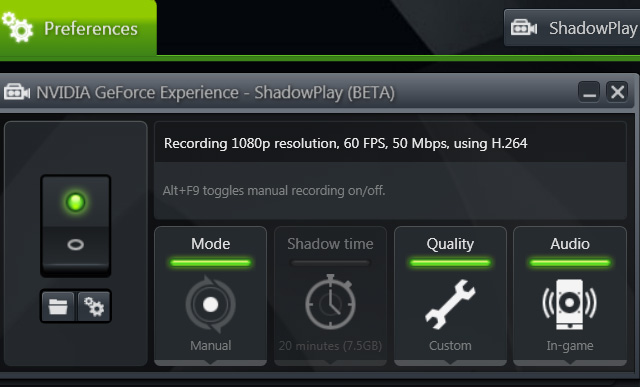 Capturing video from the computer screen is easy these days, and it takes me to the first tool used in my film: ShadowPlay. Nvidia ShadowPlay is a hardware accelerated screen recording utility for Windows PCs using GeForce GPUs, made by Nvidia Corp as part of its Geforce Experience software. It was released in a public beta on October 28, 2013 and can be used with all graphic cards higher than the desktop 650 series. ShadowPlay uses dedicated H.264 video encoding hardware found in 600 and 700 series graphics cards to allow the captured content to be compressed in real time to further improve performance. ShadowPlay  can be configured to record continuously with a rolling buffer of customizable length, allowing the user to save the last 20 minutes of the video if something interesting has happened in their game, without having to remember to start recording beforehand. You simply have to press a button!

The most recent versions of the program offer the ability to include microphone voice in the recording via the settings menu, and allow Windows 7 users to have an indefinite amount of manual recording instead of the initial 4GB per recording and 20 minutes of “shadow time”, which were previously only possible on Windows 8 and Windows 8.1.

With ShadowPlay as my recording device, I set to capture sequences of Elite to create my story. The resulting video, which I called “A Normal Day in Space” gives viewers the idea of what a – virtual – pilot can do in Elite: Dangerous. I centered much of the action in the fights that always seem to excite people and do show some nice FX effects, but I also show some free flying with wingmen and the approach and entering moments at the big space stations of the game. Star exploration and trading are also part of the game, but I left those for another day.

Let me add here an interesting footnote: on the first day of my video recording the cable TV had Stanley Kubrick's and Arthur C. Clarke 2001: A Space Odyssey on show, so I watched the film again. It's the movie I've seen the most since its launch in 1968, and I never grow tired of it. It was a good incentive for my own “space-opera”. 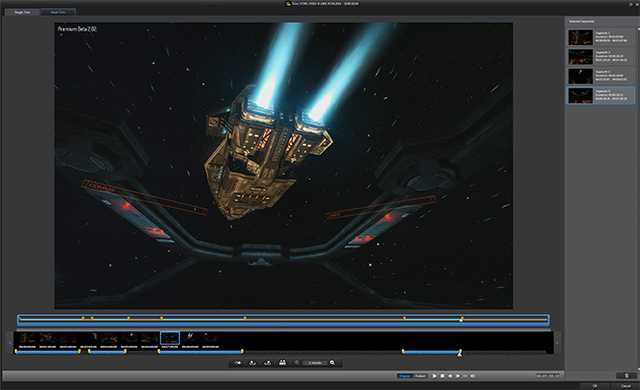 To have enough footage for my video I recorded a considerable amount of action sequences, over two days, using the ShadowPlay. I then imported the files to Cyberlink's PowerDirector 12, to start working. Although the program offers a Multicam option, that lets you edit footage from 4 different cams at once, I opted to use the possibility to work with multiple timelines and simply edit the different segments in a second timeline, adding them afterwards to the main timeline. As PowerDirector lets you define multiple timelines for video, audio, special effects, etc., it is easy to work this way.

So, I trimmed sequences, organized them together, inserted titles and credits, transitions, chose the music for the background and defined the levels of audio sources, using the mixing options available in PowerDirector 12. At the end, I used one option from the program that I really like: Pack Project Materials. This allows you to create a folder in which the program automatically places all the files used in the project being saved. It is a wise choice, because it makes easy to have in one place the different types of files used in each video. I tend to have a Projects folder  per year, where I place all the projects saves and the final video, but having files you picked from different areas in your computer – video from the video archive, music from the music archive, etc. – all in one folder is a good way to stay away from chaos.

The resulting video is an example of the potential of multiple things: Elite, the game, Shadow Play, the screen capture tool for nVidia, and the editor PowerDirector 12, from Cyberlink. I am just touching the surface on both the game and video editor, but I do believe the video gives you an idea of the things you can do to tell your own stories, both from REAL LIFE and from within games. 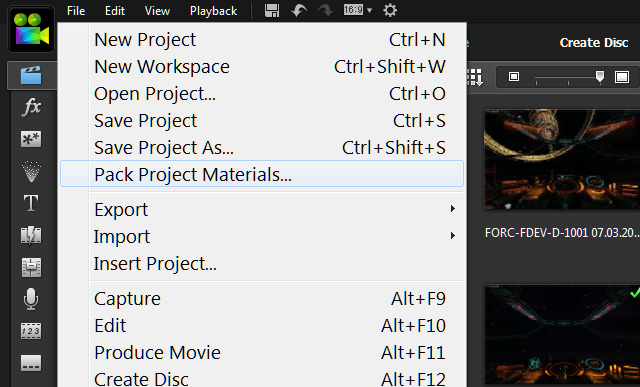 To end this article, one last note: I do think  videographers can do a fantastic work in virtual worlds. I do intend to explore more of this potential, as I've done previously with photography taken in virtual worlds. As I wrote above, the tools available these days allow us to experiment things we hardly could do in the past. In fact, using virtual worlds for filming is not new, Machinima, the use of real-time computer graphics engines to create a cinematic production, exists since 2000, and its roots go some 20 years back in time, but the power of the new computers and graphic engines makes this activity even more interesting.

Virtual worlds are, these days, an experimentation ground accessible to all, and the potential for rich narratives constructed in them can go beyond the initial story line defined by the creators of those worlds. Because players are free to roam about, role play, explore and discover unique perspectives, I do believe virtual worlds can be a fantastic “boot camp” to explore videography and new ways to build narratives. After all, they are not that different from what Hollywood offers: fiction!